What would you do with half a billion dollars? Buy a private island? Visit every country in the world? Cruise the globe on a super yacht? You could do all of those things (with dozens of family and friends) and still have change to spare. But what if you lost half a billion? Well, that’s how much Australian’s lose each year to car theft – $443.7 million, in fact.

The average age of stolen vehicles was 11 years old. 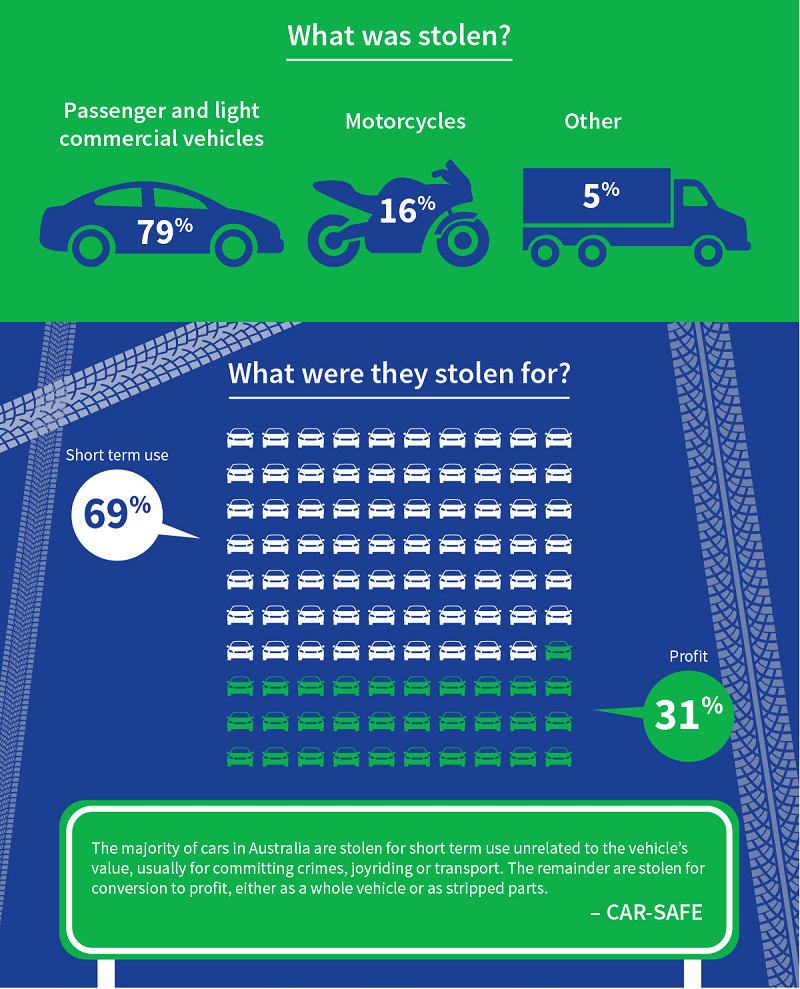 Why are vehicles stolen?

Motivation for vehicle theft usually falls into two categories: short-term use or profit. The CARS report defines short-term use as vehicles stolen for purpose other than their value, such as the perpetration of other crimes, joyriding or transport. Short term use statistics include all vehicles which are recovered after a theft, regardless of their condition upon recovery, and may include a number of vehicles which were recovered in a ‘stripped’ condition, and may have been the target of ‘for profit’ thieves.

Reading the CARS report, it’s important to remember that statistical data is often a compilation of sources that are not all collected or analysed in the same way. For example, due to the ‘unknown’ nature of for profit thefts, the for profit theft statistics could be inflated by vehicles that have been stolen for short term purposes and then dumped in waterways or bushland and have not yet been recovered. The CARS report accounts for this by adjusting for ‘late recovery’. In 2014/15, 10% of vehicles classified as ‘stolen for profit’ in the previous year were recovered and reclassified as ‘short term’ use. 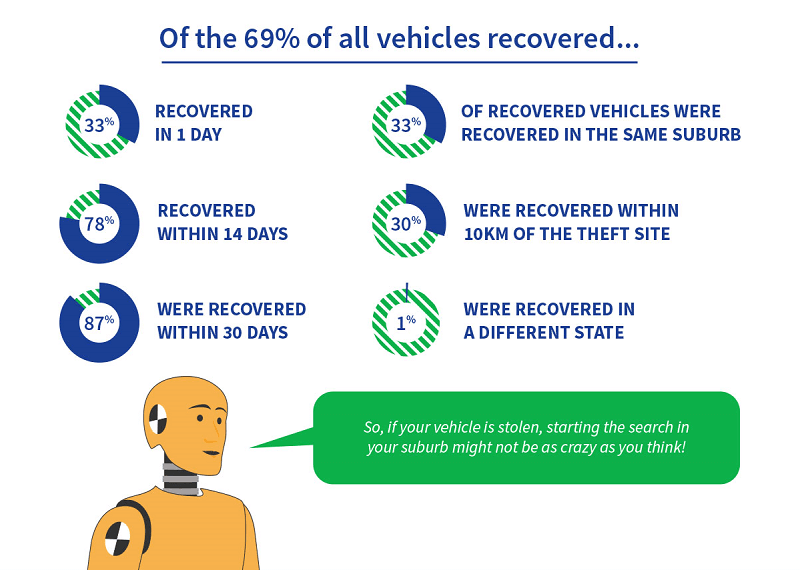 Although you might assume that high value vehicles are a thief’s favourite targets, this assumption isn’t supported by the data. In fact, low value vehicles (under $5,000) accounted for 44% (two-fifths) of all short term vehicle thefts; only 2% of vehicle thefts were attributed to cars over $50,000 in value. There may be a number of reasons for this:

However, fitting a car with an immobiliser isn’t guaranteed protection against theft. Although having an immobiliser decreases risk, thieves are now using diagnostic technologies meant for mechanics to disable car immobilisers. This is a more sophisticated system of theft that’s more likely to be used in for profit thefts, rather than short-term thefts.

In the for profit thefts category, passenger/light commercial vehicles still accounted for the majority of vehicle thefts at 64%, however motorcycles proved popular in 2015, accounting for 28% of for profit thefts (almost three times as many as short-term thefts). The age of for profit theft vehicles was also over a wider age range – between five and fourteen years old. The top four brands for motorcycle theft included Honda, Yamaha, Kawasaki and Suzuki. 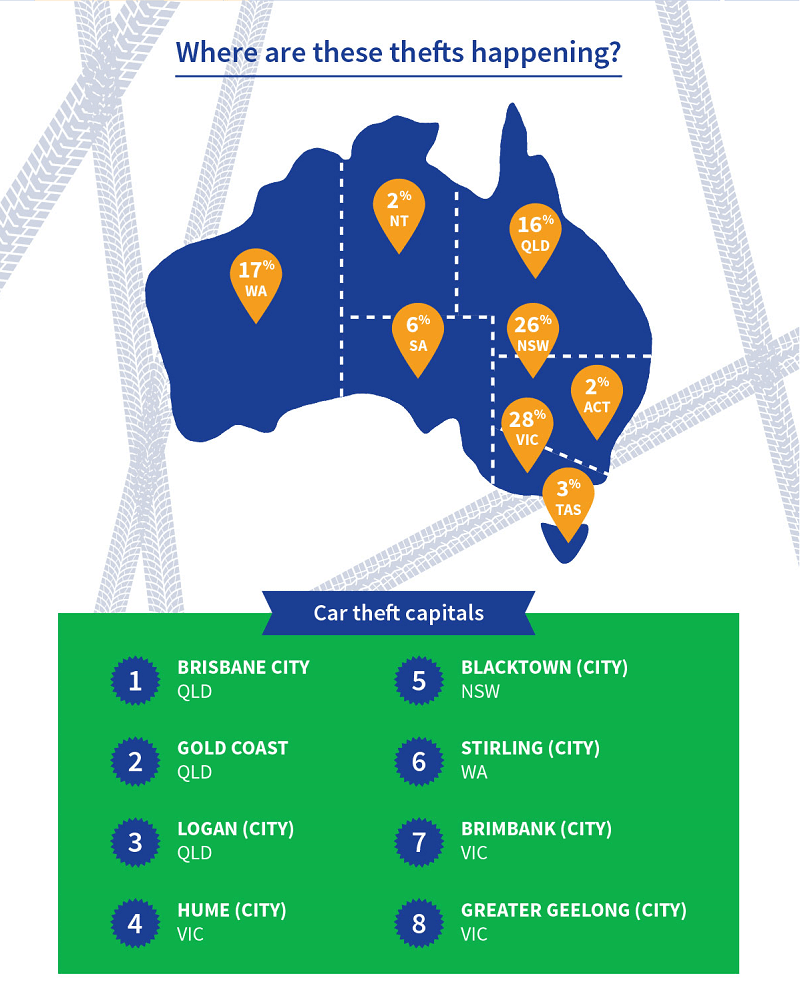 Where & when – The location and timing of vehicle theft

Although popular assumption may lead you to believe that your car is more likely to be stolen off the street, think again. Over half of all vehicles stolen in Australia are stolen from the home (52% in fact). Street theft only accounts for 27% of vehicle thefts! Wherever possible, park your vehicle in a garage, behind gates or in a secure parking area to reduce the risk of theft.

Vehicle thefts are usually less frequent during the colder months of June, July, August and September, with theft rates increasing between October and March (February is the exception to this, however it has fewer days, which could account for the statistical variation). 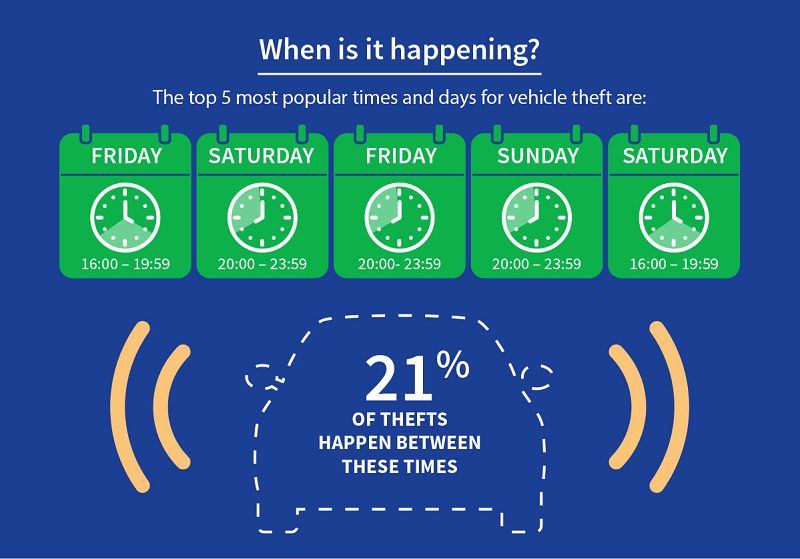 Timing is everything; most vehicles are stolen in the late afternoon and evening – between four pm and midnight – on Fridays, Saturdays and Sundays.

State by state, there’s significant variation and it’s important to consider the underlying causes that lead to this statistical variation, as it can skew our perception of the vehicle theft data. Smaller states and territories like the Northern Territory, the ACT and Tasmania have smaller populations and less data, so any shift in the figures in these areas will have a greater impact to their overall numbers (for example, in the ACT and Tasmania for profit theft rates increased 13% and 19% respectively, however, this is calculated on a small amount of data, which may disproportionately affect the statistics). Larger jurisdictions, like NSW and Western Australia recorded 4% and 3% for profit theft increases, respectively. 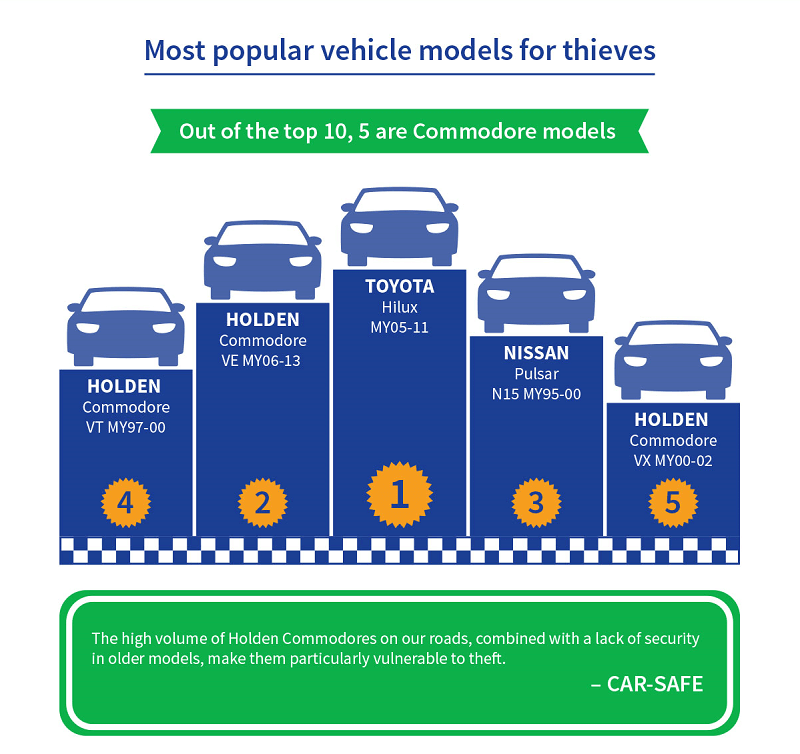 Perhaps one of the most interesting changes to the vehicle theft data for 2015 is in the make/model of popular cars targeted. While the 2013/14 data ranked various Holden Commodores as it’s highest vehicle for theft, this year’s data shows that the Toyota Hilux is Australia’s ‘most wanted’ for stolen vehicles (for profit).

The number of stolen Hilux utes has increased 10% in the last 12 months and 4 out of every 10 Toyota Hilux utes stolen are never recovered. Many Hilux utes are stolen for parts or broken down and shipped to the Middle East or Asia and sold on the black market.

Now, just to point out a less than obvious difference – the Toyota Hilux MY05-11 is the most popular for profit (or professional) vehicle theft in 2015; however, if you add up all the Commodores stolen across the year, the Australian motoring icon still tops the charts for overall thefts, although 72% of Commodores are recovered, making them a more popular choice with short-term thieves versus for profit ones.

Although vehicle thefts have decreased in recent years, we can all do our part to help keep these statistics on the downward trend. Here are four top tips to protect your vehicle against theft.

Grab some extra tips from: carsecuritybeginsathome.com

Looking forward to 2016, the outlook for the future is pretty positive. As car security systems get more advanced and the overall age of the Australian registered fleet decreases (with new cars replacing older, more theft-prone models on the road), so too should vehicle theft statistics. We can all help to support the decrease in vehicle thefts by protecting our cars and keys and promoting local government vehicle theft awareness initiatives in our cities and suburbs.