7 home security tips to keep thieves out of the house

In the UK, one police official recently argued they should no longer respond to minor acts of burglary. This is because of a decrease in the rate of this particular crime (and an increase in other, more serious crimes).1

Here at home, burglary has decreased by 54% between 2003 and 2013.2 But statistics mean little to individuals affected by such a serious crime. And a drop in the prevalence of burglary doesn’t mean it’s gone for good. Indeed, there was still a home being broken into every 2 minutes in Australia in 2013.3

It’s clear that it’s more important than ever to take charge of your home’s security. And with the help of some of Australia’s criminals, we’re going to help you do just that.

What keeps burglars out of the house?

Here are our top home security tips, which we’ll elaborate on throughout the article.

Now, let us explain why these tips will keep burglars out of your house.

470 prison detainees (nearly a quarter of whom were thieves) were interviewed by the Australian Institute of Criminology in 2012 about the falling rate of crime in Australia. They were asked about the factors that would stop them from breaking into homes.

The #1 thing criminals didn’t want to deal with during a burglary was discovery. Drawing attention to themselves was a sure-fire way of inviting trouble to their activities. That is why security measures that alerted homeowners to the presence of thieves were most feared by invaders. Here are the top three.8

A dog can keep burglars at bay. Image from Unsplash

3 in 5 interviewed burglars interviewed by the AIC stated that man’s best friend is the strongest reason to not proceed with a home burglary. This is largely because of how much noise a dog can make when prowlers come to the house.

Considering a dog for your home? The most popular breeds in Australia are American Staffordshire Terrier, the Australian Cattle Dog, and Border Collies.4 That said, the most important thing for you to look for is a pup that’s easily trained.

Working alarm systems. Close to half of interviewed thieves said a working alarm system would stop them from home invasion. We would like to put a big emphasis here on ‘working’, because that is what lets people down in home security.

Let us elaborate. A 2009 report from the Security Research Centre notes the following failures of alarm panels: 5

If you’re going to install serious security, consider getting a professional to do so. You can even seek out a discounted home and contents insurance premium when your system is properly installed.

Finally, sensor lights (22.8%) proved to be a serious deterrent. After all, no thief wants to be thrown into plain view of any neighbours or homeowners!

Here is the full list of ‘burglar deterrents’ from the AIC: 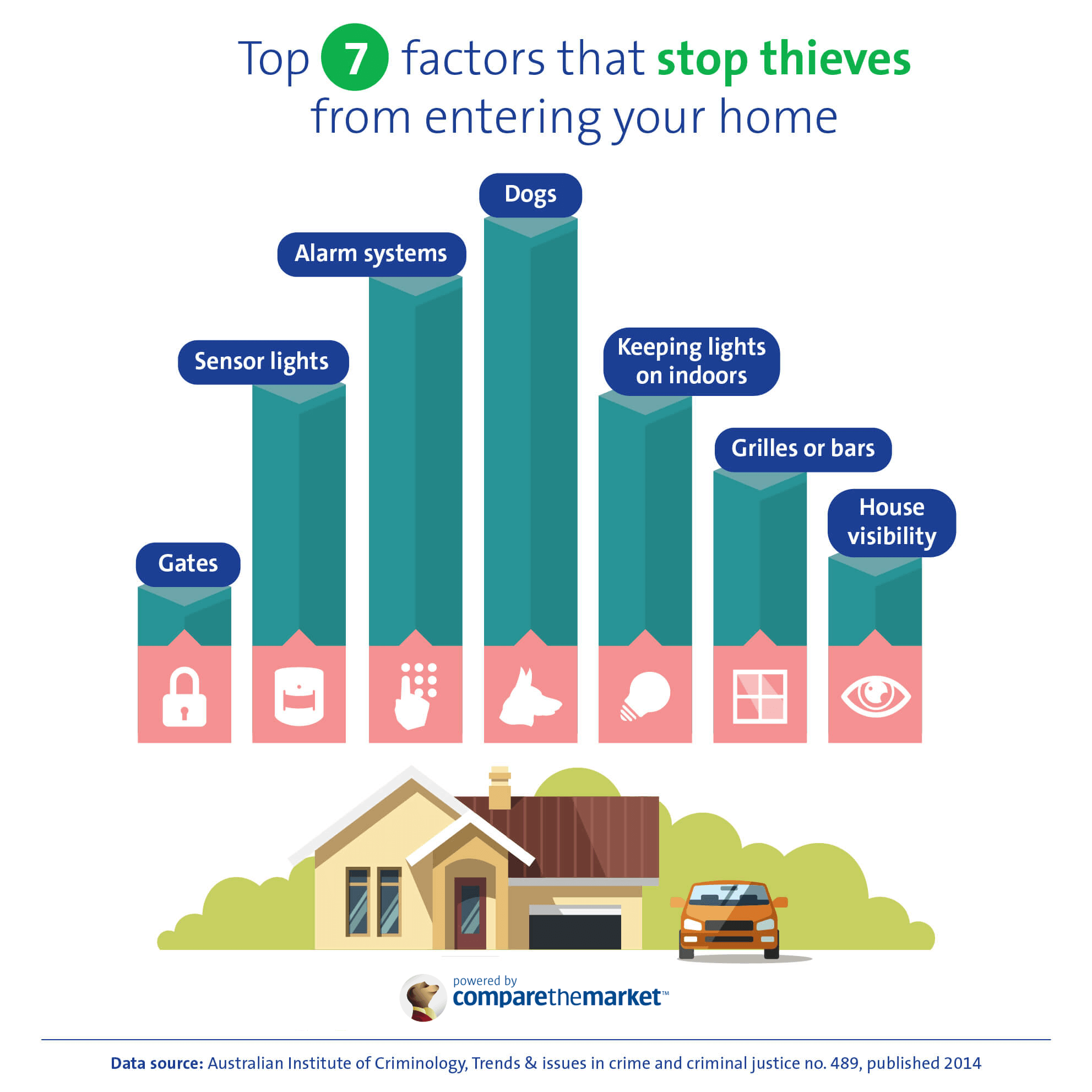 The most common mistakes we make about home security

Prevention is key, but vigilance is the watchword. You can be as prepared for home invasions as possible, and still you might make a crucial mistake that costs you your most treasured belongings. Here’s what criminals said were the most common mistakes people made that resulted in burglaries.

How burglars choose your home above someone else’s

The last thing we want to look at is the ‘why’ of theft. Why do burglars choose one house over another, and why rob someone in the first place?

A research paper published by Griffith University details some of the triggers that prompt thieves (having recently been released from a prison in Melbourne) to steal.6

The paper goes on to say how certain homes are chosen:

“Three-quarters of their burglars made the initial decision to commit a burglary away from the scene of the crime and then searched around for a suitable area until they found a target.” 7

The above means that many criminals are going to be ‘in the market’ for somewhere to rob – having made the decision to do so already – but are picky when it comes to choosing one place over another.

Our final word of advice: take photos of new belongings as you buy them (for any future insurance claims), review your home’s security flaws, and address your home’s level of ‘attraction’.

If you take that advice seriously, your home will be more secure in the future.