What kind of relationship do Aussies have with the lottery?

With the $100 million Powerball being drawn tonight, many Aussies are scrambling to their nearest newsagency to buy a slice of this enormous jackpot. “If only I could win the lotto” is not an uncommon thought for many Australians right now.

However, in the midst of trying to attain this lifestyle, does winning the lottery become an unhealthy habit for Australians’ hip pockets?

So, how many of us are winning the lottery?

According to a recent Roy Morgan study, buying lottery or scratchie tickets is the most popular form of gambling in Australia. That’s hardly a surprise, considering some of the extravagant major jackpots that have been won in the last ten years by “the lucky people”.

In the twelve months prior to June 2018, over half of Aussies over the age of eighteen (10.6 million people) participated in some form of gambling. Of this number, 7.7 million Aussies bought a lottery ticket from any draw.

However, would this still be the case if players knew what their rough odds were of actually winning the first division of lottery in Australia with a single game?

Australians have a better chance of being struck by lightning (1 in 1.6 million) or dying from a snake bite or sting (1 in 1 million).

How much are Aussies spending on lottery?

While many of us like to ‘have a punt’ when it comes to the lottery, we’re not breaking the bank in doing so. Australians don’t splurge as much on lottery tickets as they do on other forms of gambling; particularly poker machines which take up 60% of Australians’ overall gambling spend, compared to 13% on lotteries, according to Roy Morgan research.

However, these spending figures appear much higher in a 2017 gambling report by the Australian Gambling Research Centre (AGRC) and Australian Government’s Institute of Family Studies (AIFS). This report suggests that regular lottery participants spent $695 annually on average on the lottery. 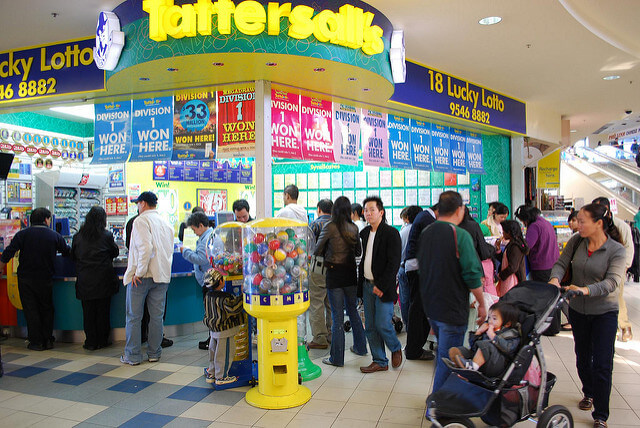 The Sydney Morning Herald revealed that for the $100 million Powerball jackpot in August, customers lined up enthusiastically at a newsagency which had sold a first-division winning ticket the month before. The owner of the newsagency in question stated that customers were commonly spending one hundred dollars on tickets. However, every second or third customer was spending a few hundred, and a few customers each day were spending thousands on the chance to get rich quick.

Who is gambling on lotteries?

Sales show that this form of gambling is more popular in certain states, with 48.6% of Western Australians and 43.2% of Queenslanders buying a lottery or scratchie ticket in an average three months. This is far more prevalent than in other Australian states.

Whether it’s because older Aussies are dreaming of retiring in style or trying to battle higher living costs and lower pensions, those between the age of 50 to 64 and over 65 are the most likely age group to buy lottery or scratchie tickets in an average three months.

These statistics are also backed up in the 2017 gambling report by the AIFS & AGRC, which shows that a larger percentage of lottery players were aged 50 years and over. The research also found that a high proportion of Australians playing lotteries were born in Europe, had 10 years or less of schooling or had completed a certificate or diploma, were retired, married or in a de facto relationship, and lived with only their partner.

Gambling can potentially have disastrous consequences for the personal and household finances of many Australians, as well as the health and wellbeing of the gambler and their family.

According to a 2017 study by Melbourne Institute, there are four categories of gamblers: non-problem gambling, low-risk, moderate-risk and problem gambling.

The study suggests that 1.5% of men and 0.8% of women are ‘problem gamblers’ (almost 200,000 people), while close to 8% of Australians (1.4 million) report ‘at least one harmful consequence as a result of their gambling’.

If you think you might have a problem with gambling or know someone who might be affected by it, visit www.gamblinghelponline.org.au or call 1800 858 858 for a free, confidential chat.