The most influential medical professionals on social media

It seems there’s an influencer for every sector, and even doctors are getting in on the act!

Lots of medical professionals have built up loyal followings online, sharing their medical expertise and giving an insight into life on the front line.

From doctors and nurses to plastic surgeons and ‘pimple poppers’, many medics have built themselves a potentially profitable side job. So, we’ve analysed the follower counts of some of the most popular. We also estimated how much they could be earning per sponsored post. 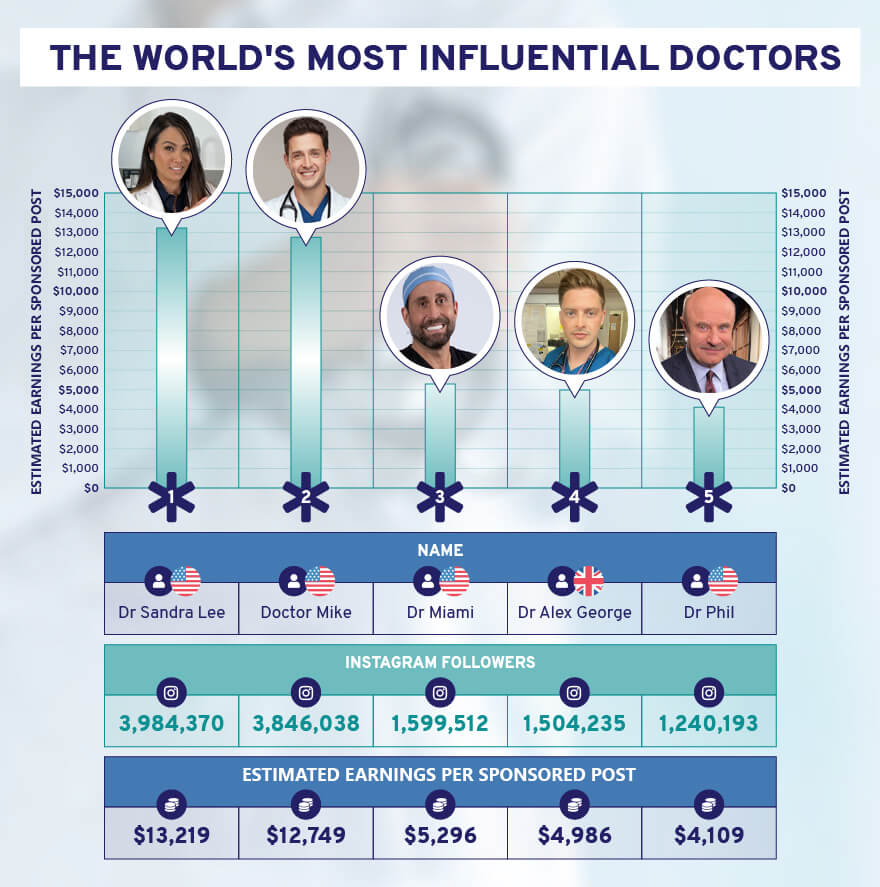 Perhaps better known as ‘Dr Pimple Popper’, Sandra Lee may be the most famous doctor on the web (or perhaps infamous depending on how squeamish you are!).

Her feed, which showcases videos of her popping pimples and removing cysts, isn’t for the faint of heart, but it’s earned Dr Lee almost four million followers and even her own TV show.

Doctor Mike (aka Mikhail Varshavski) isn’t just a New York-based family physician – he also held the title of People magazine’s ‘Sexiest Doctor Alive’ for 2015. This title alone could go some way to explaining how he’s built up over 3.8 million followers on Instagram!

Along with his Instagram account, Doctor Mike also has a successful YouTube channel where his stated aim is to make the field of medicine relatable, understandable and fun.

Dr Miami (or Michael Salzhauer) is a plastic surgeon who gained fame for his quite graphic video posts of procedures such as butt lifts, liposuction and breast surgeries. These videos have earned him more than 1.5 million followers.

He’s worked with numerous celebrity clients over the years and, along with having his own TV show, he’s even written his own children’s book and recorded a hit song!

Dr Alex rose to fame on TV’s Love Island in 2018. However, he’s also a working doctor for the United Kingdom’s National Health Service (NHS), and now combines his role as a social media influencer with his day job.

This means his Instagram is a blend of updates from his daily life, posts around mental and physical wellbeing and weekly health Q&As.

Perhaps the original ‘medical influencer’, Dr Phil McGraw has been a household name in the US for over 20 years as host of his own advice show. While he holds a doctorate in clinical psychology, Dr Phil’s focus has been firmly on the entertainment world for the past few years.

All follower counts are correct as of 16/09/2020. We calculated estimated earnings per sponsored post by using Influencer Marketing Hub’s Instagram Money Calculator. This tool estimates how much an account could earn per post based on factors like the number of followers and engagement rate.