Which car brands do we take to the web to talk about the most?

We all have car brands that we absolutely love, and brands that we’d actively avoid. Our first cars often evoke feelings of nostalgia, and there’s always that one supercar brand that we dream about buying if we ever won the lottery.

But do other countries love our favourite car brands as much as we do? And which brands are viewed most negatively? We’ve uncovered all of this below.

MINI is the most loved car brand in Australia, Canada and the UK… 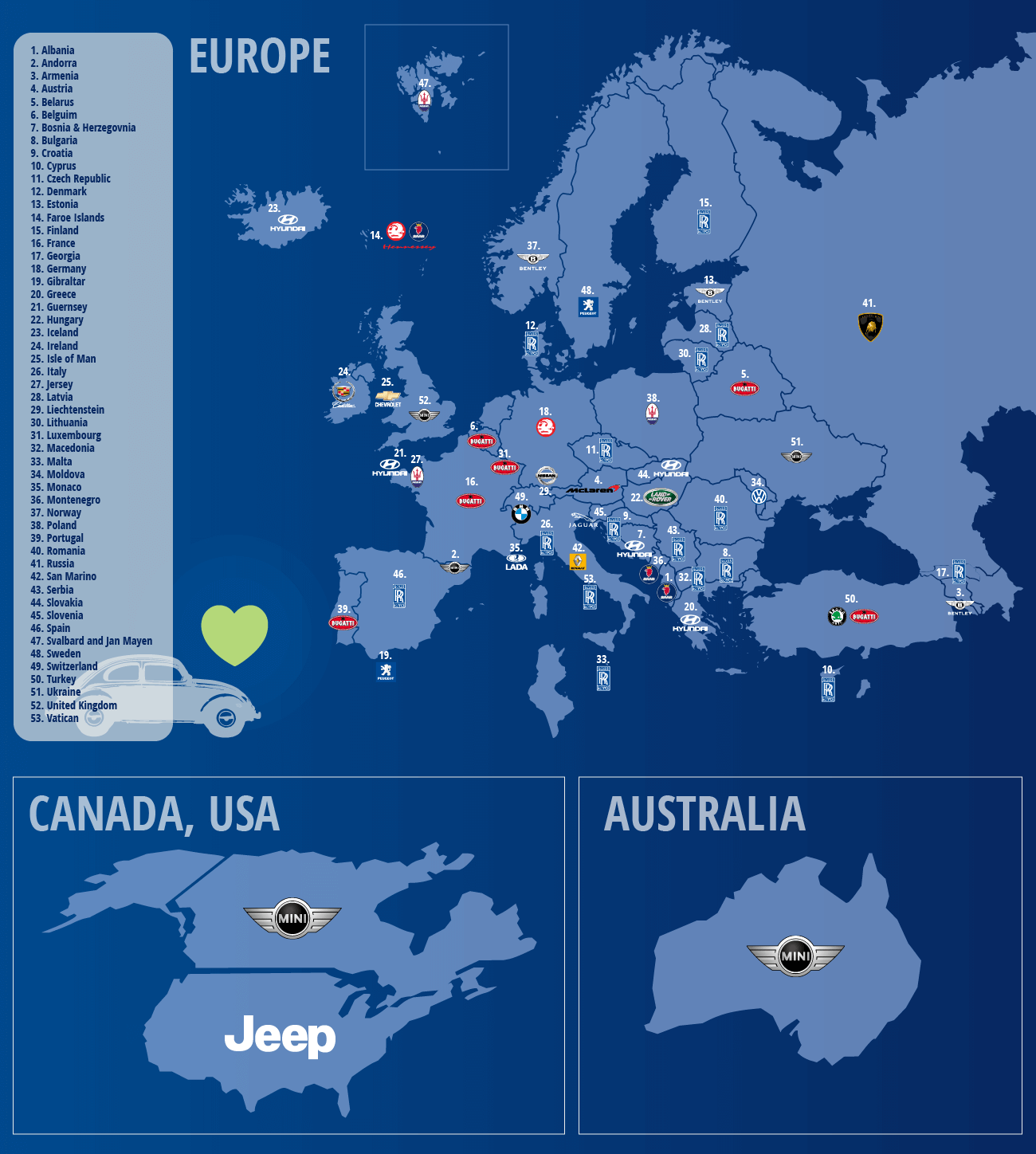 It turns out that Australia loves the British founded car brand MINI the most (a sentiment that the UK also echoes!).

… and Dodge and Ford are the least 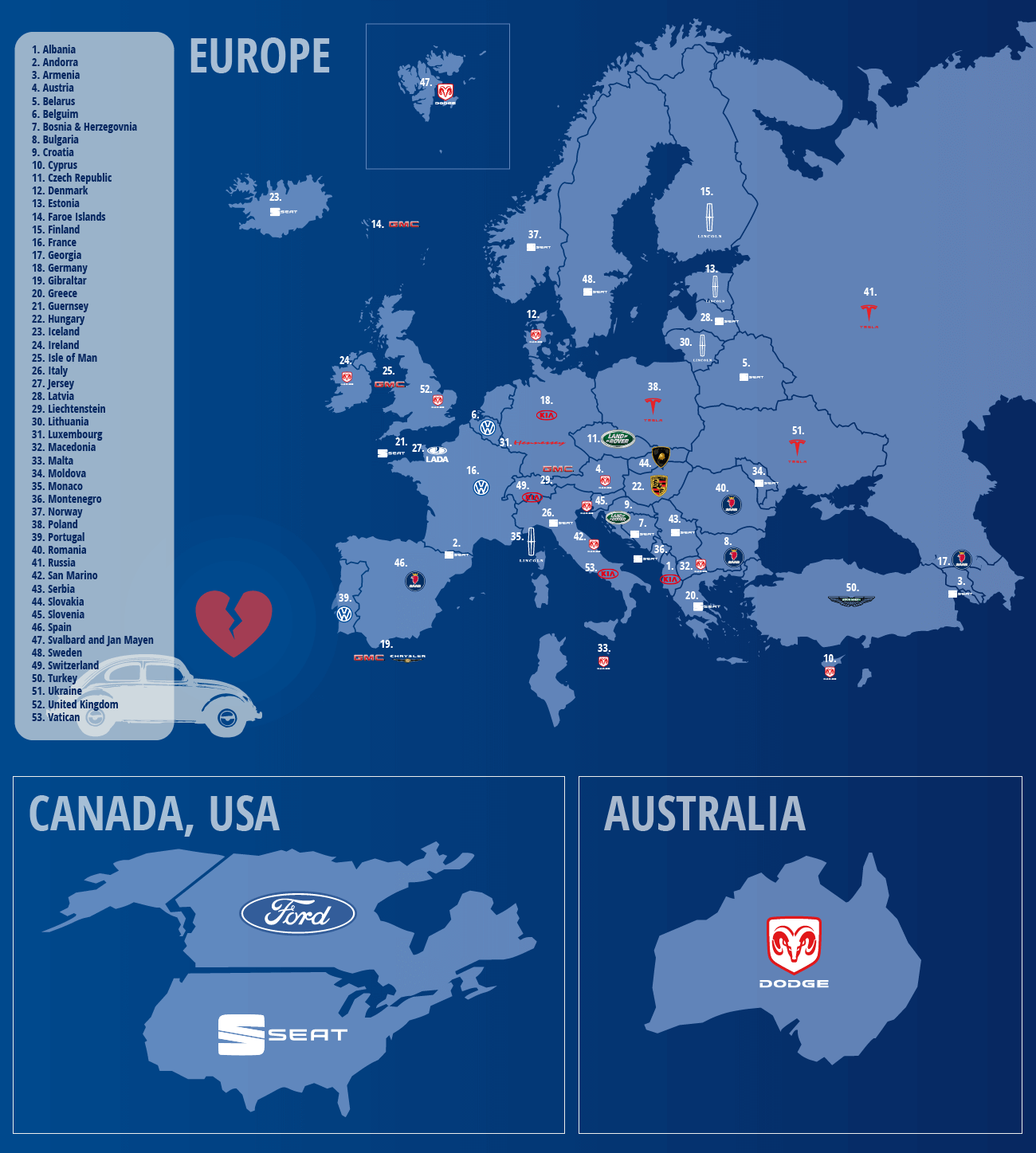 The Dodge had the most negative sentiment in Australia, just like in the UK – and searches for the brand have also plummeted. Over the past 12 months, searches for ‘1968 Dodge Charger’ and ‘Dodge cars for sale in Australia’ decreased by 55% and 40% in Australia.

In the USA, the least liked car brand is SEAT, whereas in Canada, it’s Ford – although the Northwest territories are most likely to search for Ford models, followed by Saskatchewan.

Rolls-Royce is the most loved car brand worldwide 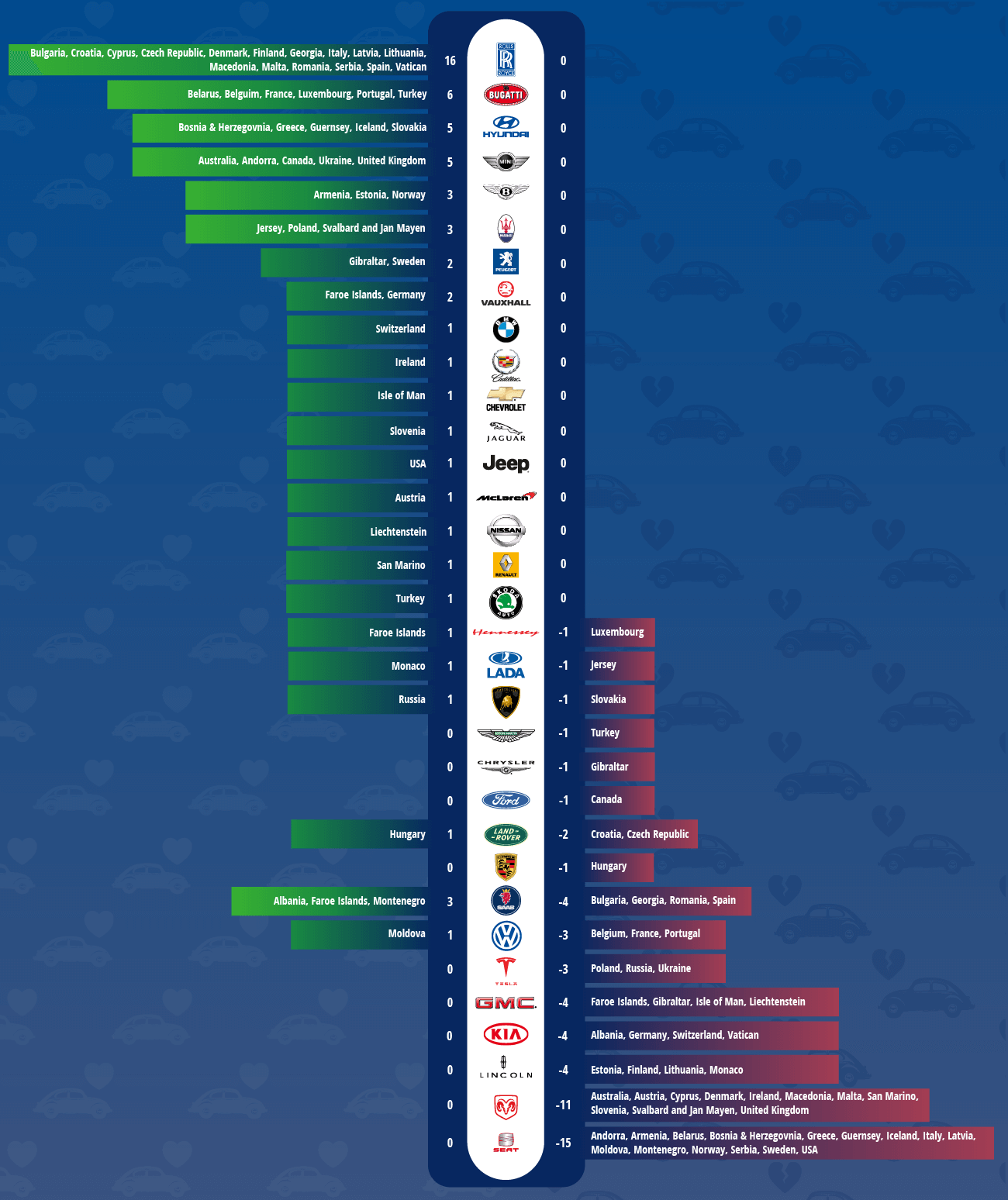 Rolls-Royce has the most positive sentiment across the world, with it being the favourite in 16 countries (all in Europe), including Croatia, Denmark, Italy, Malta and Serbia.

There’s a three-way tie in second place for the most positive car brand, with Bugatti, Hyundai, and MINI all being cited as favourites in five countries. Bugatti is also favoured in Belarus, Belgium, France, Luxembourg and Portugal, whereas Hyundai is preferred in Bosnia, Greece, Guernsey, Iceland and Slovakia.

The MINI is the most-loved car brand outside of Europe, with Australia and Canada finding it the most positive, alongside Andorra, the Ukraine, and, of course, the country it originated in – the UK.

In contrast, the car brand with the most negative sentiment by far is Spanish brand SEAT, with 15 countries having it as their least favourite. Aside from the USA, SEAT’s negative sentiment is from European countries, including Greece, Iceland, Latvia and Norway.

In second place is Dodge, a Michigan-based brand. This was the most negative brand for 11 countries, including Australia, Ireland and the UK. In joint third place was GMC, Kia, and Lincoln, each securing last place in four countries.

Stephen Zeller, General Manager of General Insurance at Compare the Market, said:
“Whichever car brand you’re looking to buy, the most important thing is insuring it for when you’re on the road. With the option of purchasing it on its own, or as an extra to car insurance, it’s also sensible to consider roadside assistance so ensure you’re prepared, should the worst happen.”

To determine the car brands included within the campaign, we used Statista and YouGov, then to determine the car brands with the most positive and negative sentiment per country, we used the Linkfluence sentiment tool, which crawls data on mentions across the internet from the past 12 months. We then picked out the brand with the largest percentage of positive and negative sentiment, to determine which one people talk about the most positively, and which one people would avoid or feel angriest about, across Europe, America, Canada and Australia.

Brought to you by the car insurance experts at comparethemarket.com.au.