How often do you scroll through Instagram and stop at the latest #fitspo post, thinking you’re going to change your diet or your workout routine so you can get those abs you’ve been dreaming of forever?

With so many of us consuming fitness content on Instagram, it’s no wonder that a lot of celebrities are cashing in on fitness posts – and for some people, they’ve turned it into a full-time job.

We decided to uncover the nation’s obsession with #fitspo posts and reveal the richest fitness influencers – or ‘fitfluencers’ – on Instagram. Take a look below to see who’s been crowned number one, and who’s made it into the coveted top 10.

Please note: Individuals were ranked based on their Instagram earnings only, not on all of their sources of income.

With over 289 million Instagram followers and an engagement rate of 0.46%, Dwayne ‘The Rock’ Johnson makes around $1,058,730 AUD per post, making him the richest fitfluencer on our list by far! If he were to post just once a week over the course of a year, he could earn a staggering $55,053,960 AUD just from Instagram posts!

A former professional wrestler, The Rock also has his own clothing collection with Under Armour and has recently signed up as a global partner of the Ultimate Fighting Championship, firmly cementing his position as number one.

In second place, making an average of $159,485 AUD per post is mixed martial artist and UFC fighter, Conor McGregor. The former Ultimate Fighting Championship lightweight and featherweight double champion has an impressively high engagement rate of 1.18% per post, with his 43,000+ followers regularly liking and commenting on his posts.

Khabib Nurmagomedov has made it into third place on our fitfluencer rich list – the second mixed martial artist to make it into the top three! Khabib the longest-reigning lightweight champion of the UFC and can earn an impressive $118,668 AUD per post. 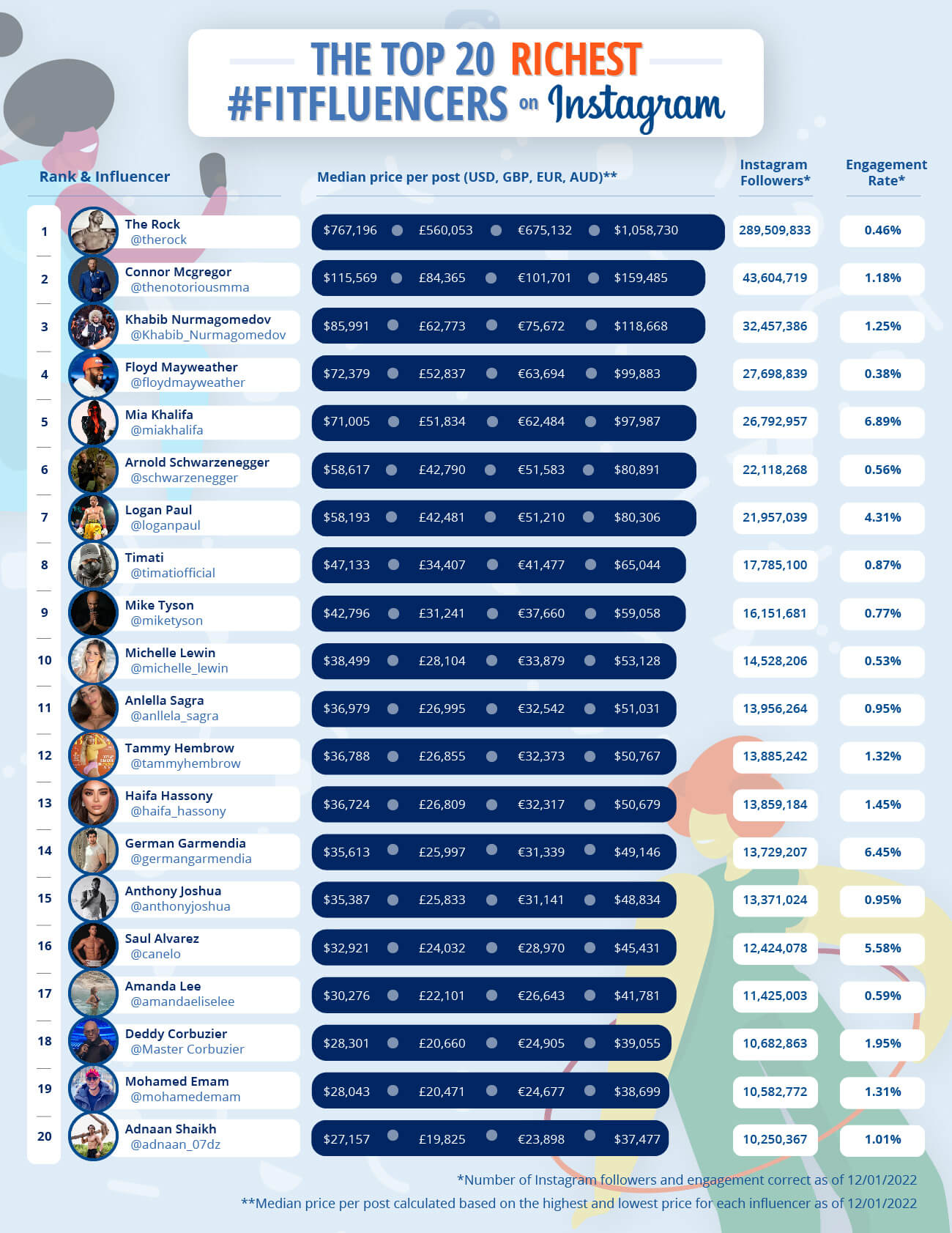 Just two out of the top 10 richest fitfluencers are female

Rounding off the top five are former professional boxer, Floyd Mayweather, and Mia Khalifa. As the highest earning female on our list with an engagement rate of 6.89% and around $97,987 AUD made from every post, Khalifa could make $5,095,324 AUD over the course of a year if she posted just once a week.

Other notable names that have entered our fitfluencer rich list include actor and former bodybuilder Arnold Schwarzenegger, who’s average earnings per post have landed him in sixth position ($80,891 AUD). Logan Paul is extremely close behind, at $80,306 AUD per post. While the YouTuber may be more well-known for his video content, he was also a short-lived professional boxer until he announced his retirement earlier in 2022. Now, he’s focusing on his latest business venture, Prime Energy Drink, with former rival KSI.

Timati, Mike Tyson and Michelle Lewin round out the top 10, with Lewin’s average earnings of $53,128 AUD a post still pretty respectable!

Did your favourite fitfluencers make it onto our Instagram rich list, or are there any new accounts you’re found that you’ll follow in the quest for even more #fitspo? Alternatively, have you decided to see if you can earn a bit of money on the side with your own fitness account on Instagram? If these figures are anything to go by, there’s a lot of money to be made!

Compare The Market sought to determine the highest earning influencers on Instagram. To obtain the top earning fitness influencers, we used the HypeAuditor tool’s list and filtered the data for the category ‘fitness’ correct as at 13/01/2021.

To determine which personalities are positioned to earn the most from Instagram posts, we used HypeAuditor’s earning data to determine how much the individuals are expected to earn, per post.

We also used HypeAuditor’s tool to generate follower and fan engagement data. With this information, we were then able to calculate the median fee each fitfluencer could demand per sponsored post. Please note, the money figures from the tools were given in US dollars before we exchanged the figures into pounds, Australian Dollars, and Euros using the currency converter tool, XE.com. All currency figures are correct as of 13/01/2022.

Brought to you by Compare the Market: Making it easier for Australians to search for great deals on Private Health Insurance.