How our trust in medical professionals has changed throughout COVID-19

The pandemic has changed many people’s perceptions of the healthcare industry and wellness in general, but just how has the medical industry’s reputation changed?

According to new survey data from Compare the Market, one in five adults have revealed they trust the medical industry less than when the COVID-19 pandemic first hit more than two years ago.

The results reveal that for a considerable amount of the 2,515 adults surveyed across Australia and North America, confidence in medical professionals has suffered a significant blow in recent years.

If we take our minds back to 2019 and the years leading up to it, most people felt pretty good about their relationship with their doctor. Trust was especially high in Australia, where as many as 90.3% of adults expressed confidence in their local medical professionals. The likelihood increased with age, too – those 65 years and older showed the highest levels of trust.

The numbers were a little lower in Canada, although it was still an impressive number. Almost nine in every ten people (87.0%) expressed trust in local medical professionals; however, it was virtually a complete majority for those aged 65 and older (95.9%). Again, the younger generation was considerably more likely to say the opposite.

The United States also showed strong trust indicators, although the figures were the lowest of the three countries at 85.3%. While older adults once again had the most confidence, there was an almost 20% decrease in trust between 65+ and 25-34-year-olds. American males were slightly more likely than females to trust their doctors before the pandemic. 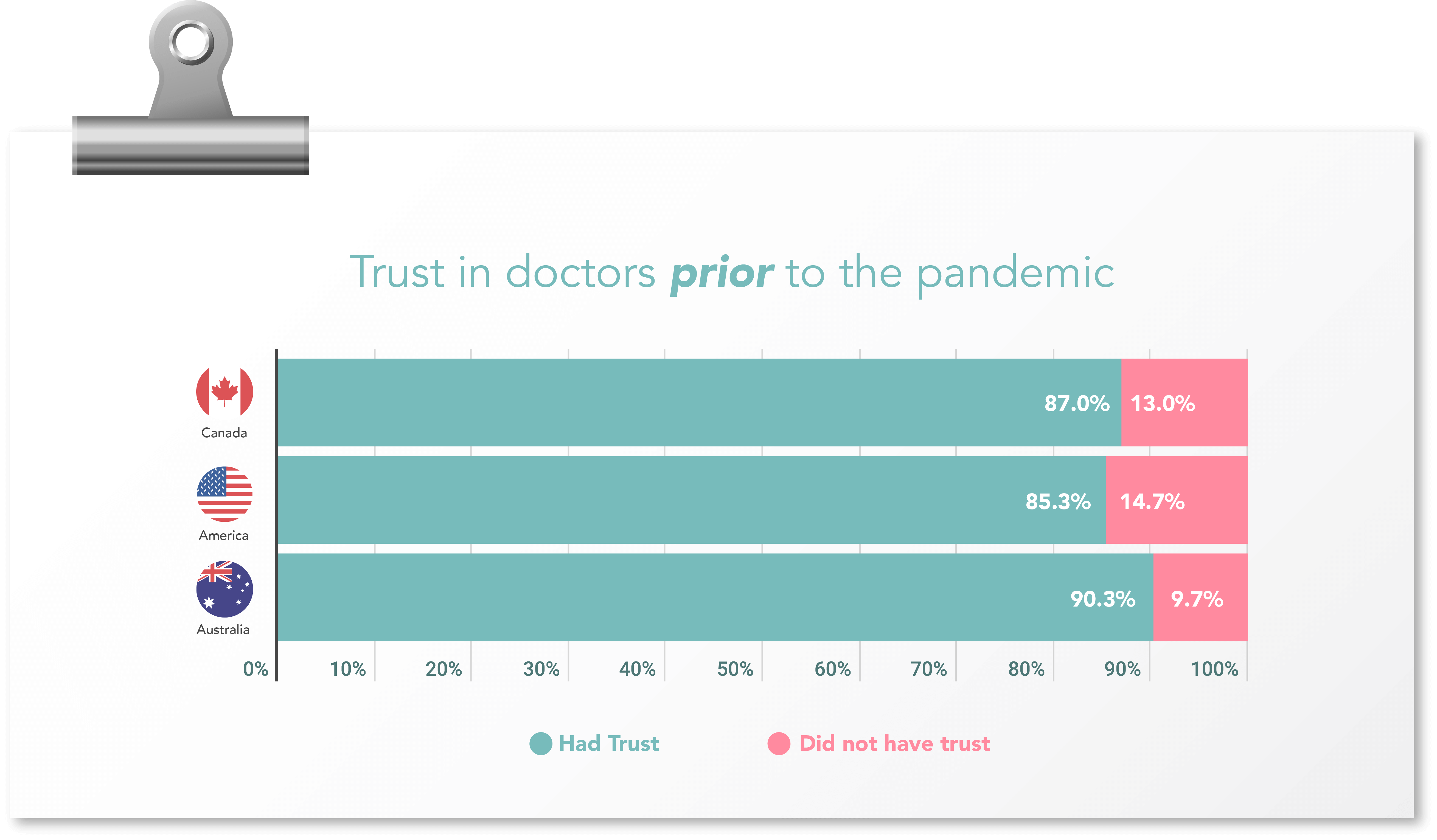 How COVID-19 changed the dynamic

Since the pandemic was first declared in early 2020, people’s faith in medical professionals has taken a considerable hit. In fact, every single age group across Australia, America and Canada suffered a decrease in trust.

Where Australians had the most trust prior to the pandemic, they have also suffered the biggest loss in the years since, with a 7.09% decrease in confidence from then until now.

The most significant change for Australians was felt in the 35-54-year-old age bracket, where at least double the number of respondents indicated losing trust in medical professionals since the pandemic started. On the contrary, those aged 65 and older experienced the smallest change.

Adults in the United States experienced a slightly smaller shift, with four in every five adults (80.3%) claiming to still have faith in their doctors in more recent times. Despite this, there was an almost 10% decrease (9.5%) for young adults up to 24 years old, which was almost twice as high as the nationwide average (5.86%). As with Australia’s results, trust steadily decreased from the older to younger generations.

All three countries experienced similarities in the data. Females were more likely to maintain confidence in their doctors than their male or non-binary counterparts in recent years. 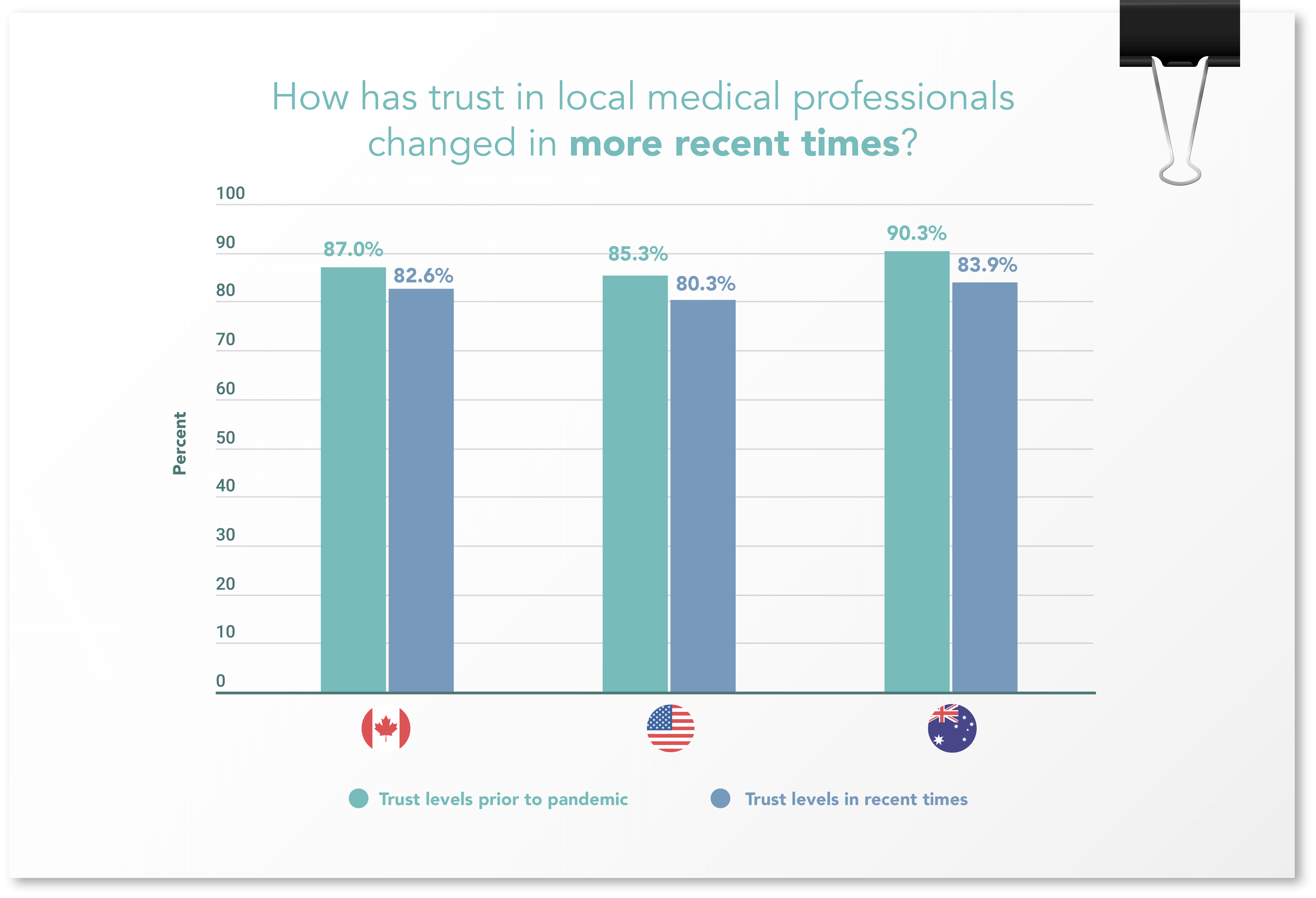 Each country indicated various reasons why they didn’t trust their doctors; however, a select few explanations appeared across all three nations.

The most common reasons in each country include:

In Australia, the top three reasons for medical mistrust were the dismissal of problems (34.6%), followed by long wait times (29.6%) and unhelpful suggestions (27.2%). Less common explanations included unaffordable healthcare (24.7%) and a ‘self-mending’ mentality (25.9%). A handful of respondents also listed dissatisfaction with vaccine mandates as a key contributor to their change in opinion.

When viewing the stats from a generational perspective, Australian adults older than 65 were more likely than any other age group to quote long wait times or unhelpful suggestions as their reasons. At the other end of the scale, those aged 18-24 were the most likely to lose trust due to high costs or a belief that their bodies could mend themselves.

Females were more likely than males to list ‘problem dismissal’ as the key reason for losing trust in their doctors across all three countries. In Australia, the difference was stark enough that females were more than twice as likely to declare such a cause.

The same difference can be said for Australian females quoting incorrect diagnoses and unaffordability as the motive for their lack of confidence. Meanwhile, in the States, males were more likely to believe their body could mend itself and therefore not require medical support.

Similarly to Australia, Canada’s top three reasons for distrust were long wait times (42.3%), dismissal of problems (38.3%) and unhelpful suggestions (30.3%). Again, unaffordable healthcare was the least common reason (17.7%). For those aged 55-64, more than half (52.6%) complained that wait times were too long. Young adults (18-24-year-olds) were more commonly frustrated with incorrect diagnoses and dismissal of problems than any other age group.

Adults in North America frequently expressed dissatisfaction with the profitisation of pharmaceutical companies and a general distrust due to corruption and fraudulent operations.

In the United States, the most common reasons for lack of trust were problem dismissal (38.7%), high costs (30.2%) and wrong diagnoses (29.6%), only one of which is shared with Australia and Canada’s top reasons. While the least frequent excuse nationwide was long waiting times (22.6%), this was shared with the older generations (65+), of which less than one in five (19.0%) quoted it as a motive for lack of confidence. Long wait times were a logic more commonly favoured by 18-24-year-olds, as well as incorrect diagnoses. 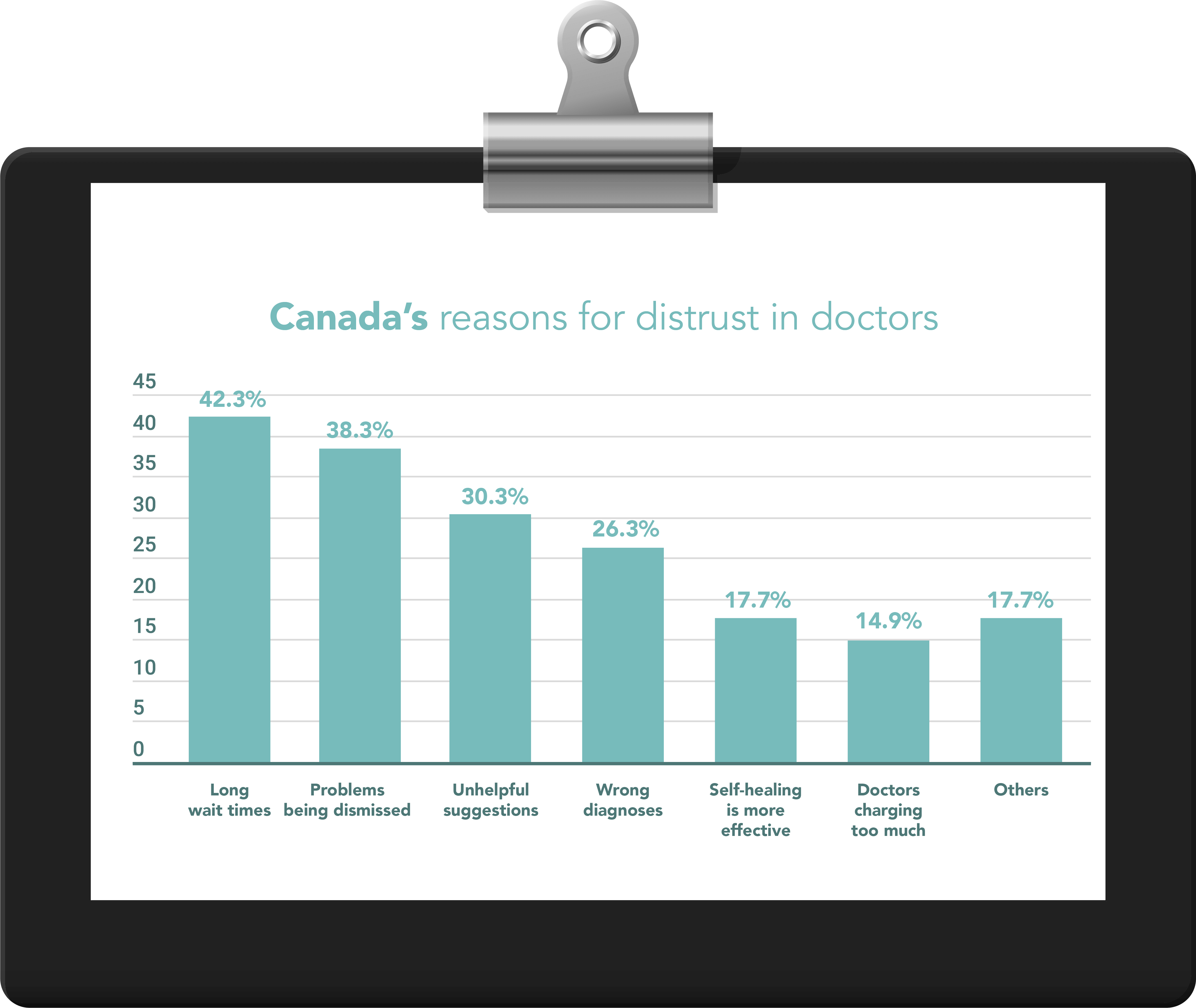 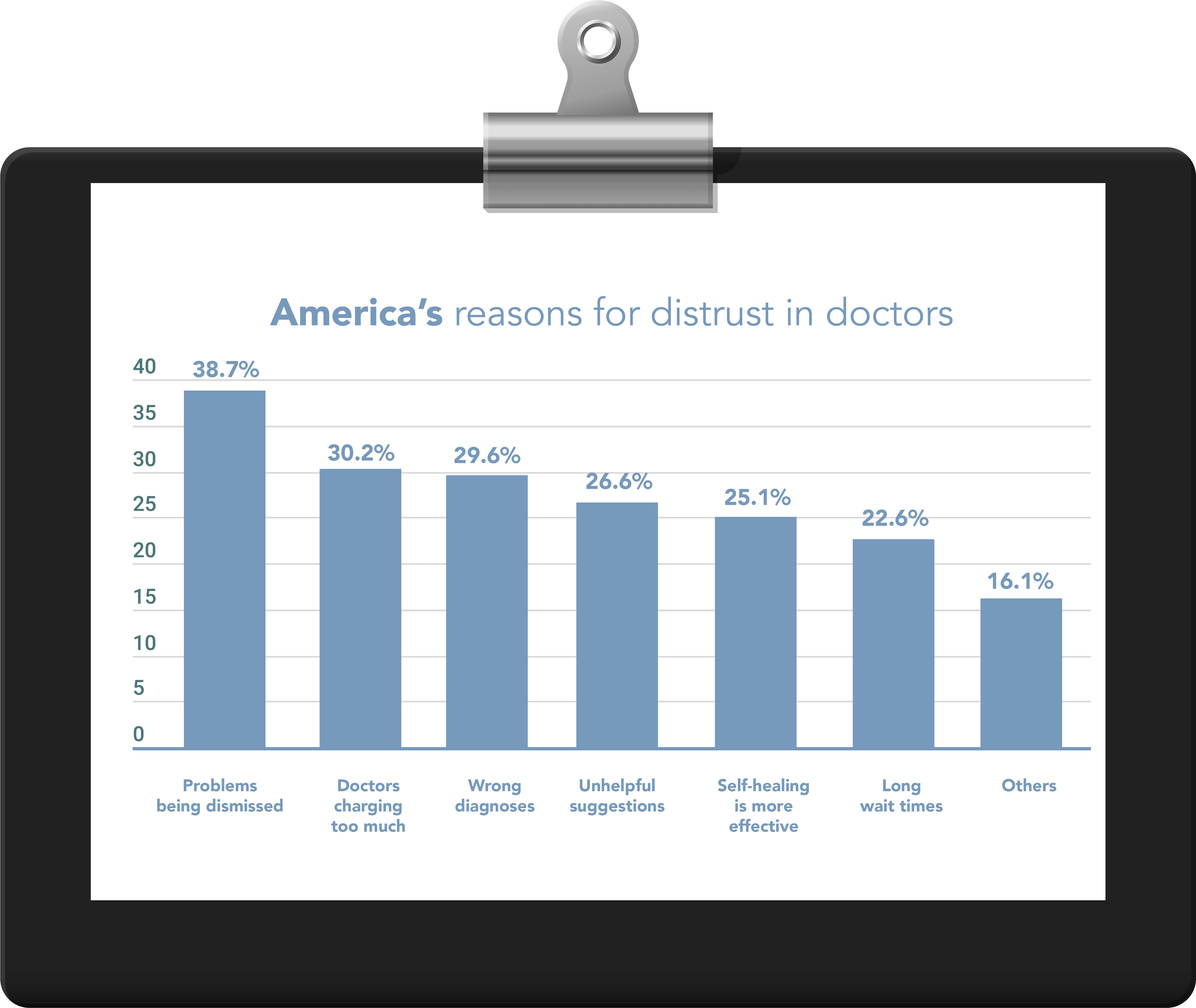 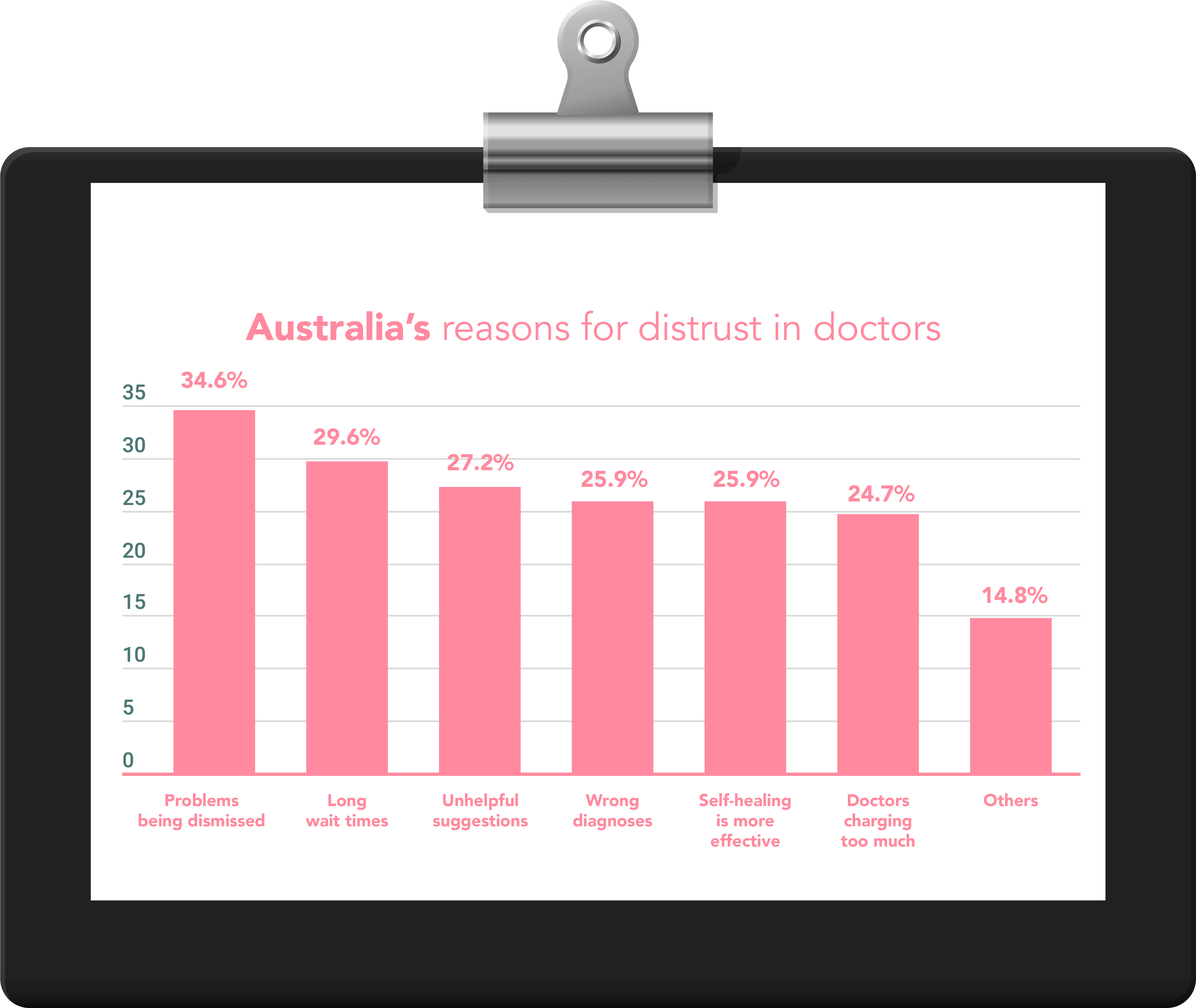 So… what do people think about COVID-19?

More than three-quarters of adults in Australia and Canada believe that the pandemic is legitimate and the vaccine effective. In the US, adults are a little more sceptical. Only 68.7% have confidence in the pandemic and COVID-19 vaccine in the States, followed by a quarter (26.1%) that feel the vaccine is ineffective. A small minority (5.3%) don’t have faith in anything related to the pandemic.

The figures are a little higher in Canada, where 75.6% of adults have complete faith in the official information about COVID-19, which is much higher than the one in five (18.4%) that don’t trust the vaccine. Again, a small minority of 6.0% don’t follow anything pandemic-related.

In Australia, where confidence is highest, as many as 78.4% have acknowledged COVID-19 as legitimate and the vaccine effective. This is shadowed by 17.1% who have no faith in the vaccine and 4.6% who turn a blind eye to all pandemic information.

Of all three countries, the older generation (65+) is the least likely to doubt pandemic information, whereas young adults (18-24) are the most likely to be in disbelief. 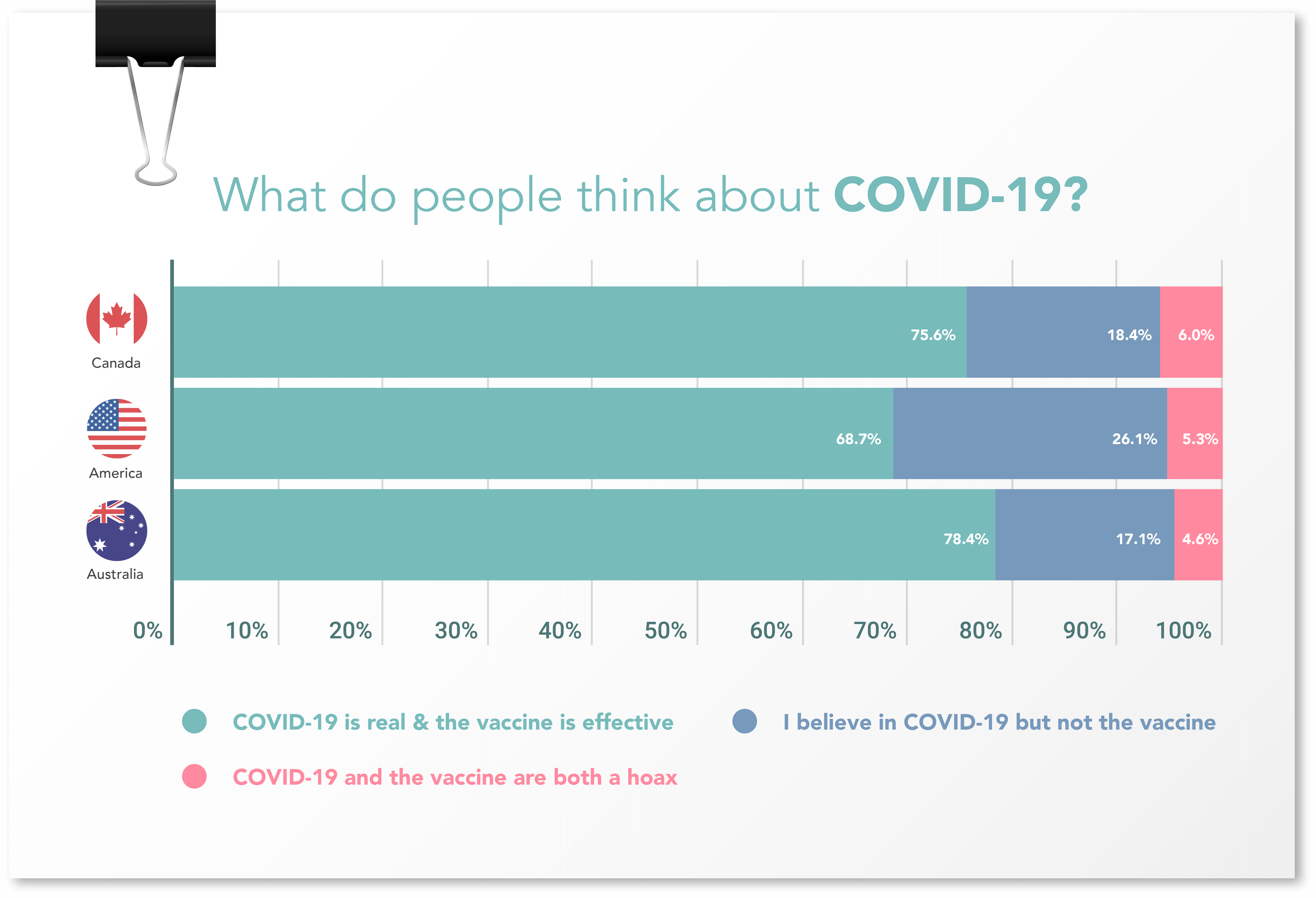 Trust has also been impacting people’s willingness to access healthcare

Another shocking revelation from Compare the Market’s survey was that more than 40% of those in all three countries have delayed getting the healthcare they need – in Australia’s case, many (17.4%) listed a lack of trust as the key reason why. In the States, that title was afforded to high expenses (45.9% of those who have delayed healthcare) and long waiting periods (52.3%) for Canada.

The importance of trust in medical professionals

Compare the Market’s health insurance expert, Anthony Fleming, talks to the importance of developing a good relationship with your doctor.

“Building a strong relationship and maintaining high levels of trust with your doctor can be highly beneficial for effective healthcare,” Mr Fleming said.

“Being honest about your medical background, personal life and health issues can put your local medical professionals in a better position for accurate diagnoses.

“If you don’t feel confident sharing particular information with your doctor, as many Australians and North Americans don’t, it might be time to consider looking for a new doctor who you are more comfortable with.”

For those with underlying or persistent health issues, having an appropriate health insurance policy could allow you the choice of your preferred treating doctor, so you can go with someone you trust.

It’s also important that you trust the policy you’ve chosen, which is why it is essential to search for the product that works for you. The best way to do this is by comparing your options.

Compare the Market is committed to making it easy for Australians to look for a range of deals on their Health Insurance, so that they are in a better position to find a policy that appropriately suits their needs.