Money transfer hotspots around the world

Whether they’re supporting family in another country, paying an international worker or investing in something overseas, many people around the globe rely on money transfers or remittances to send and receive money.

But just where are the world’s money transfer hotspots, and which countries are sending and receiving the most money? Is the COVID-19 pandemic expected to have any impact on money transfers in the near future?

Using data from the World Bank, we were able to determine the world’s top 10 money transfer senders and recipients. We’ve also used World Bank predictions to figure out how COVID-19 could affect money transfers to the countries selected.

*Please note: The 18 countries included below reflect the nations that sent and received the highest amount of money through personal remittances in 2019, based on World Bank estimates. Using the latest Bilateral Remittance Matrix data from 2018, we determined the top three nations each country sends money to or receives money from. The World Bank’s forecast for the impact COVID-19 could have on money transfers helped us calculate how countries could be impacted in 2020. 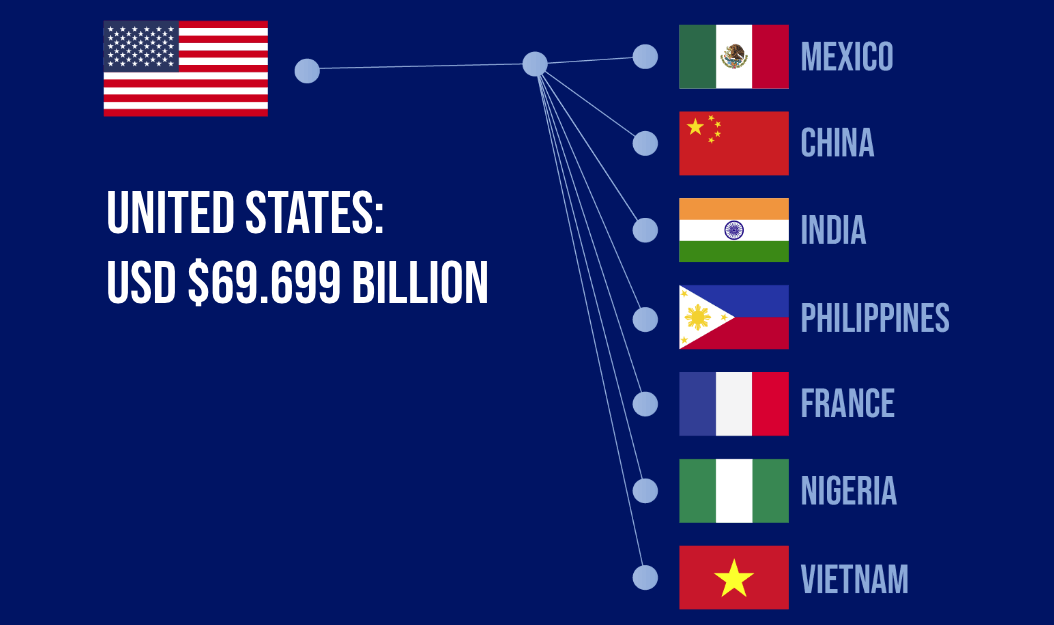 2018 data from the World Bank shows that the biggest recipients of money transfers from America were:

As a result of COVID-19, the unemployment rate in the US grew to 14.7% in April, resulting in job cuts across all industries.2 This could significantly impact the amount of money that’s transferred out of the US in 2020. 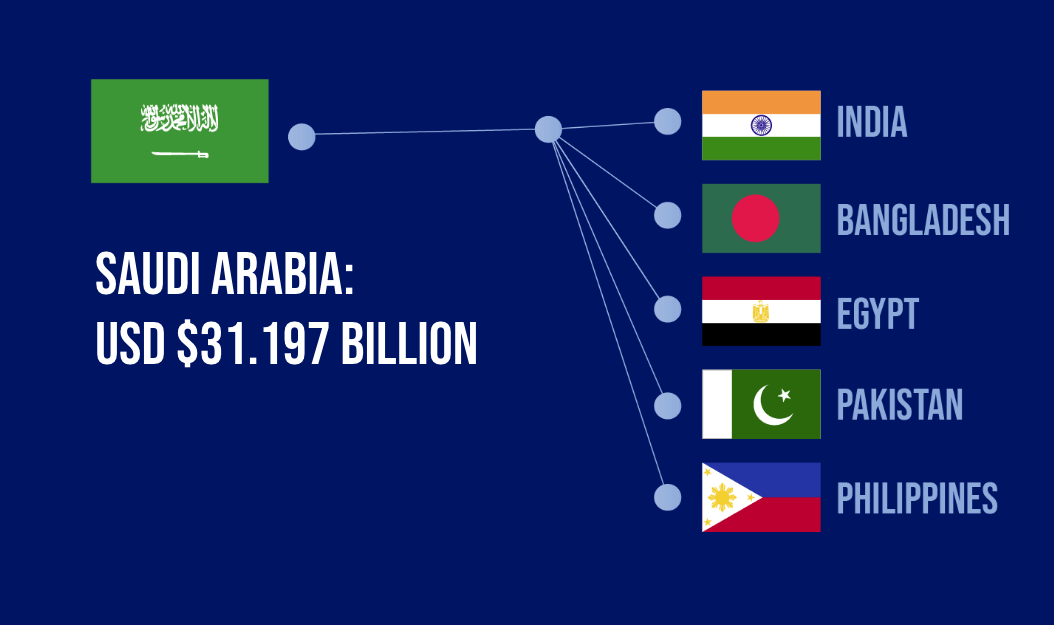 The country that sends the second-largest amount of money transfers worldwide.

The biggest receivers of transfers from Saudi Arabia in 2018 were:

It’s relatively cheap to send money out of Saudi Arabia compared to other countries around the world. For example, recent World Bank data shows it would cost an average of 5.5%, while it can be higher than 27% for other countries such as Angola.4 Saudi Arabia has recently increased market competitiveness around money transfers, has made it safer for people to send and receive money and has implemented new technologies around transfers.18

Based on 2018 World Bank Data, Switzerland sends the most money to:

In May 2020, the Swiss Federal Department of Foreign Affairs called for countries worldwide to make it easier to transfer money during the COVID-19 pandemic and that new technologies could assist with this.5

Germany is the fourth largest sender of funds through money transfers worldwide and sent a total of USD $24.062 billion (AUD $35.26 billion) in 2019 alone.1

The biggest recipients of Germany’s money transfers based on 2018 World Bank data were:

There could be a drop in money transfers out of Germany as a result of the pandemic. In fact, the ifo Institute data shows almost one in four German companies have applied for liquidity support (applying for loans or payments to stay afloat) as of June 2020.6

In 2018, Russia sent the most money to nations within proximity, including:

When it comes to sending money overseas, Russia has some of the lowest money transfer rates in the world. The average cost is only 1.7%, opposed to the worldwide average of 6.8%.7

COVID-19 has had a significant impact on the Netherlands and could affect money transfers out of the nation. The Dutch Government has implemented packages to help workers impacted by the pandemic. These include initiatives to help companies pay employees, support for independent contractors and ongoing support for affected sectors.9

Luxembourg sent USD $13.736 billion (AUD $20.13 billion) overseas through money transfers in 2019 – making it the ninth highest sender for that year.1

The latest data from the World Bank shows the nation sends the most money to:

Luxembourg shares a border with both France and Belgium, which are the two highest recipients of money transfers from Luxembourg.

Luxembourg has one of the highest GDP rates in the world,16 which could be a reason why it’s also one of the top senders of funds globally.

According to the latest data from the World Bank, Qatar sends the most money to:

The nation’s cost to transfer money internationally is 5.3%,4 compared to the global average of 6.8%.7 This may make it easier for people to invest in overseas projects or simply transfer money overseas. 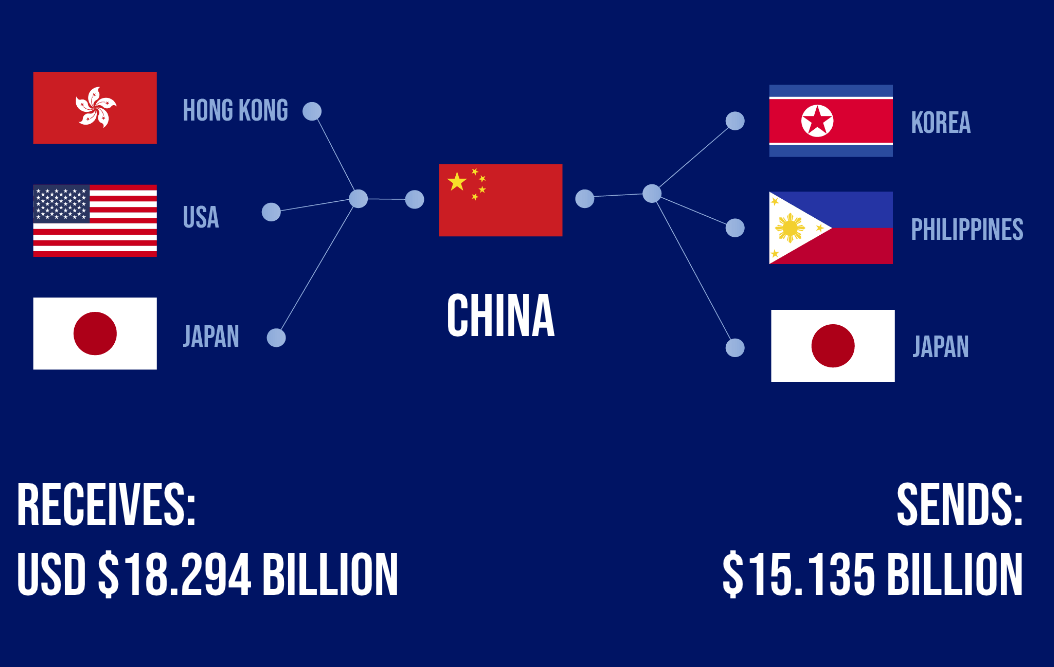 In the same year, China received the highest number of money transfers from: 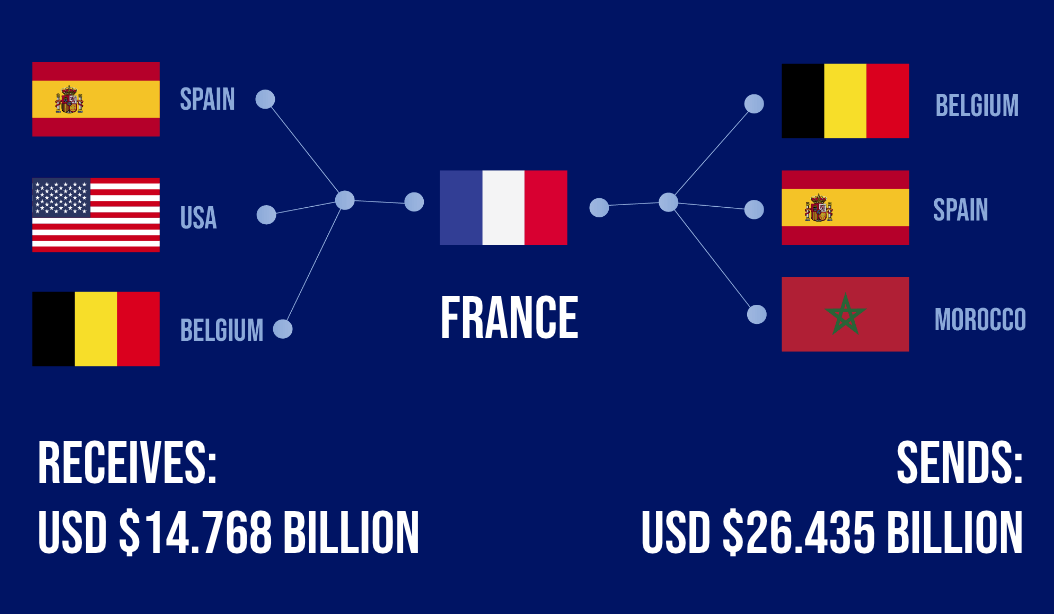 It sends the most money to:

It receives the most from 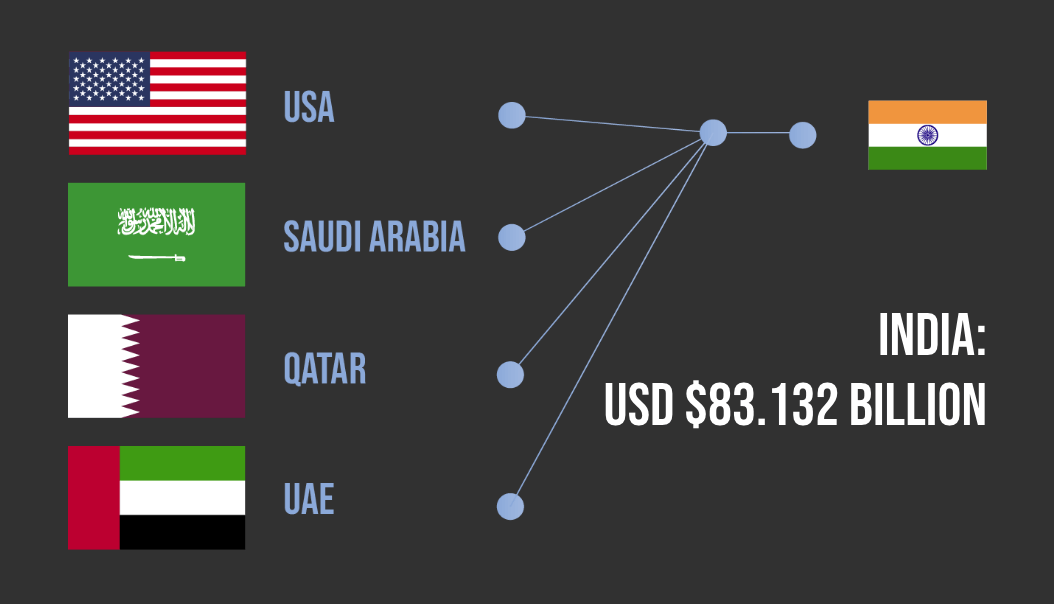 While many countries send money to India, recent World Bank data shows the most of it came from:

The World Bank predicts that South Asian countries will experience an average 22.1% drop in money transfers due to COVID-19,7 meaning India’s flow could reduce by USD $18.37 billion (AUD $26.75 billion).

World Bank data shows most money transfers were sent from:

With Latin American countries expected to see a decline of 19.3% in money transfers due to the COVID-19 pandemic,7 Mexico’s inbound money could be reduced by USD $7.455 billion (AUD $10.86 billion) as a result.

As of 2018, over four in 10 Mexicans were living below the nation’s poverty line.15 So, the large inflow of money could help many people manage daily life. 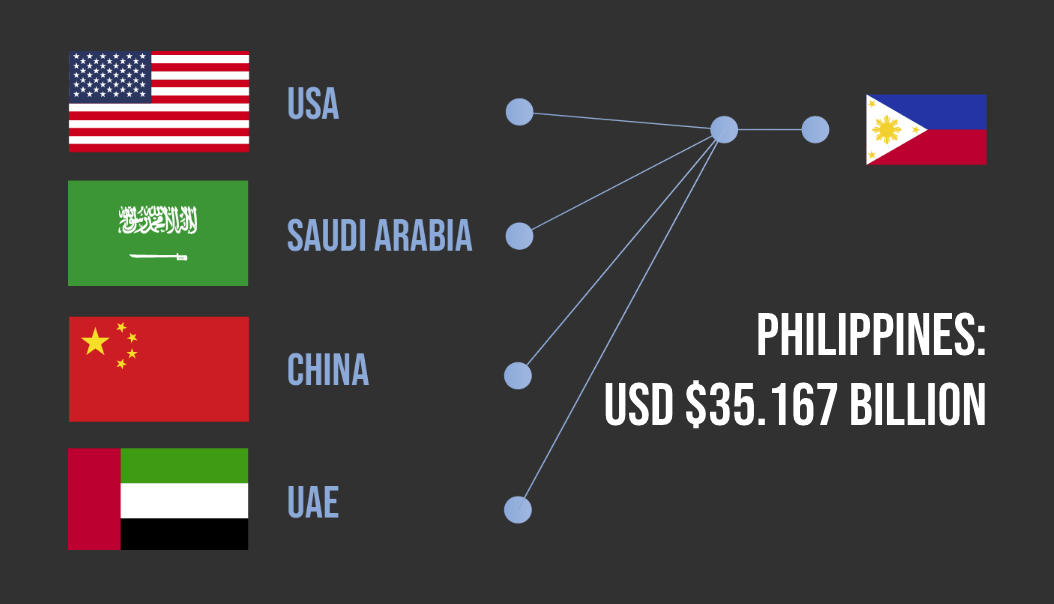 The Philippines is the third highest receiver of funds through money transfers in the world and was sent USD $35.167 billion (AUD $51.53 billion) in 2019 alone.8

The biggest sender of money to the Philippines were:

The region is predicted to be hit with a 13% reduction in money transfers due to the COVID-19 pandemic,7 meaning the Philippines could see their 2020 inbound funds slashed by USD $4.57 billion (AUD $6.66 billion). 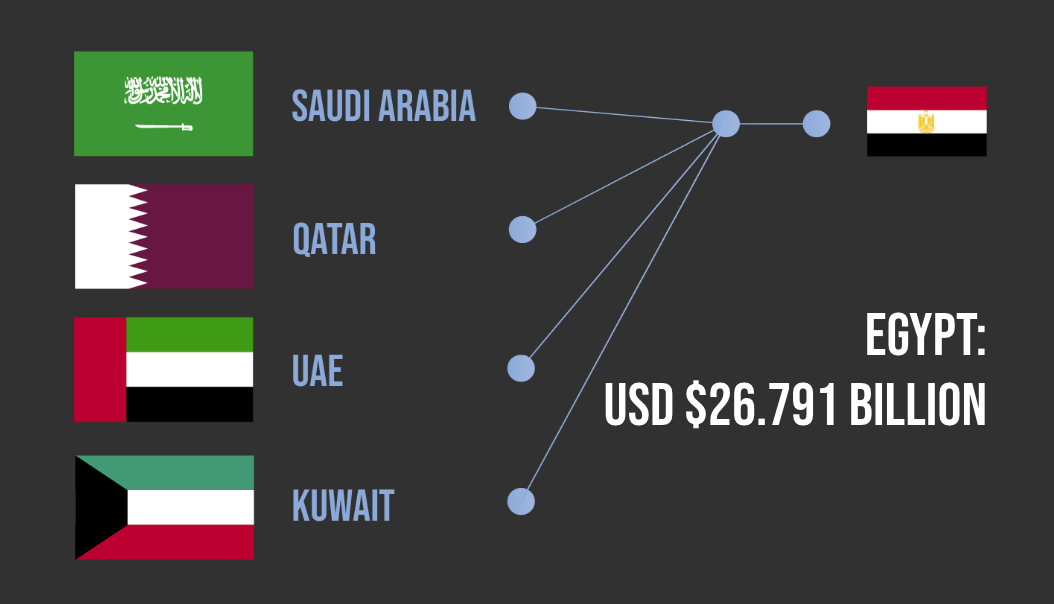 Egypt received USD $26.791 billion (AUD $39.26 billion) worth of money transfers in 2019, making it the fourth highest receiver of money globally.8

World Bank data shows that in 2018, the most significant senders of funds to Egypt were

The World Bank is anticipating a 19.6% drop in money transfers to Egypt’s world region due to COVID-19,7 which could see its funds coming into the country reduced by USD $5.251 billion (AUD $7.65 billion).

Nigeria received the sixth-highest amount of money transfers in 2019 with around USD $23.800 billion (AUD $34.87 billion) coming into the country.8

Recent World Bank data shows the biggest senders to Nigeria in 2018 were:

The World Bank predicts Sub-Saharan Africa will see a 23.1% reduction of money transfers into the region,7 which could see Nigeria’s 2020 received funds slashed by USD $5.497 billion (AUD $8.01 billion).

A large decline in money transfers to Sub-Saharan African countries like Nigeria is expected due to migrants living in countries such as China, the US and countries in the EU being impacted by the COVID-19 pandemic.7

2018 data from the World Bank shows that the countries that send the most money to Pakistan include:

South Asian countries are predicted to see a 22.1% drop in received money transfers due to COVID-19,7 which could see Pakistan’s annual inflows of money transfers reduced by USD $4.933 billion (AUD $7.28 billion).

The COVID-19 pandemic is impacting key sending countries such as the United States and United Kingdom – which is expected to contribute to this significant drop in money transfers.7

2018 data from the World Bank shows that the following countries send the most money to Bangladesh:

It costs less in money transfer fees to send money to South Asian countries such as Bangladesh, which could be why it receives a high volume of money transfers.7

World Bank data from 2018 shows that these countries send Vietnam the most money through money transfers:

If you’re sending money overseas, try comparing your options to see if you can find a great-value transfer price. With fees and exchange rates differing between providers, it’s essential to assess your options so you’re paying a price you’re comfortable with.

Why do people send money overseas?

Money for family back home
According to the United States Congressional Budget Office, it’s common for migrants to regularly send money to their home country through banks, by sending it directly to family members, or by making financial investments in their birth country.10 For example, the top three countries that receive the United States’ top money transfers are Mexico, China and India.3

The USA has high migration numbers from these countries, with US Homeland Security data showing that the most lawful permanent residents are from Mexico and China, while India ranks as the sixth-highest.11

Based on World Bank data, there’s a trend for many countries to transfer money to neighbouring nations. For example, France, Germany and Switzerland all sent the largest amount of money to other European countries. In Russia, the top three hotspots where money was transferred in 2018 was Ukraine, Uzbekistan and Kyrgyz Republic, all countries that are within proximity of the nation.3

Meanwhile, the US shares a border with Mexico, which was its highest recipient of transfers. China transferred the highest amount to other Asian nations, including Korea, the Philippines and Japan.

The payment of wages
Money transferred between countries could be to pay employees who once carried out work in a particular country. The World Bank states that personal remittances paid can include payments to employees who worked seasonally or for a short period before returning home.1

Meanwhile, the Congressional Budget Office in the US believes many people return to their home country but retain bank accounts and other financial assets in the US.13 They then continue to transfer funds from their US accounts to other nations around the world.

While the global average is currently 6.8%,7 it’s much higher and lower in some nations – which could boost or decrease money transfers from these locations.

For example, data shows that transfers from Russia, which is one of the highest senders globally, can be as low as 1.7%. In contrast, it can be as high as 27.2% in Angola, 16.2% in South Africa and 15.6% in Tanzania.4 This means it would cost more to send the same amount from different locations. 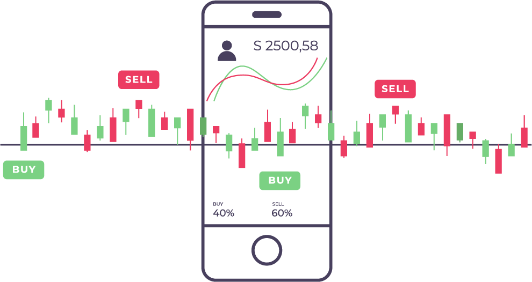 The impact of COVID-19 on money transfers

The World Bank predicts that the COVID-19 pandemic will hugely impact the world’s money transfer habits, with the largest decline in recent history anticipated.7 The impact will be felt differently across the globe. For example, money transfers to Europe and Central Asia are anticipating drops of around 28%.7 On average, they’re expected to drop by an average of 20% due to the economic crisis and loss of wages caused by shutdown procedures around the world.

Many developing nations rely on money transfers for healthcare, food, education and other basic necessities and a sharp drop could significantly impact these countries.7

It’s interesting to note that some of the top senders of money transfers have small populations, so having a large population doesn’t automatically mean that a country will send large amounts of money. Using the total amount sent and each country’s population, we’ve calculated a money transfer rate per capita. Population was determined using 2020 estimate data per country from the Central Intelligence Agency’s World Factbook.17

Using the latest World Bank Bilateral Remittance Matrix data from 2018, we determined the top three nations each country sends money to or receives money from. We were also able to calculate what the top 10 recipient nations’ money transfers inflows could be reduced by for 2020, using the World Bank’s forecast for the impact COVID-19 could have on money transfers to regions of the world. We subtracted these percentages from the funds countries received in 2019.

Brought to you by Compare the Market: Making it easier for Australians to search for great deals on International Money Transfers.