Imagine if you could hop on a high-speed train that shot you to:

Would you squeeze in a few more landmarks before your holiday ended? Perhaps you could go for that bigger and better job interstate while living in a cheaper suburb. Or, maybe you prefer to keep your feet firmly on the ground – and such travel times via rail are heartening.

With new transport technologies developing across the globe, we crunched the numbers to discover how a 1,000km/h (621.37mph) high-speed train1 – speeds akin to Virgin’s Hyperloop One design – may cut down future travel times for some of the world’s busiest travel hubs and routes.2

Several of these popular travel hubs are also found in countries that don’t have any form of high-speed rail, at the time of writing: America, Canada, Australia, New Zealand and India. So, we also show how both a standard bullet train (with a median speed of 300km/h – or 186.41mph) and the super high-speed train (1,000km/h) may drastically transform commute times between major cities in these countries.

Click on a city below to discover how quickly you could travel! 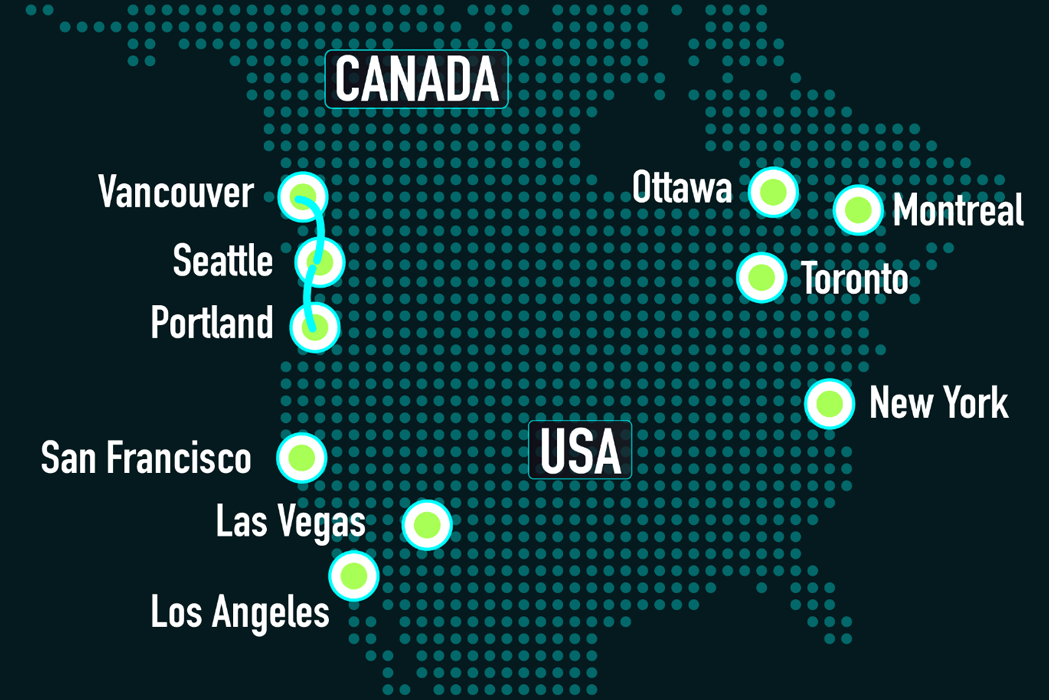 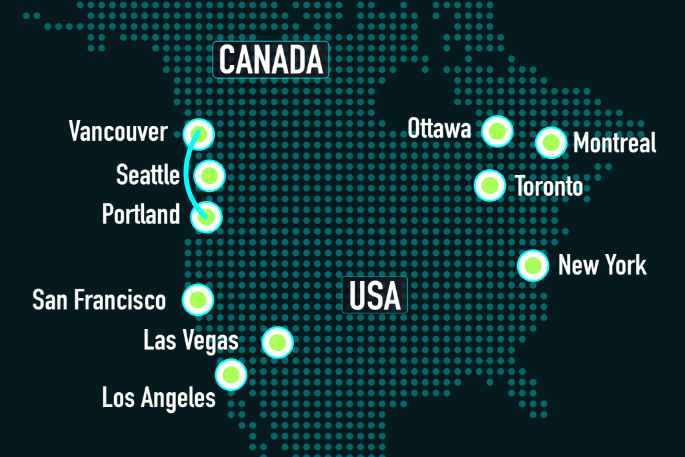 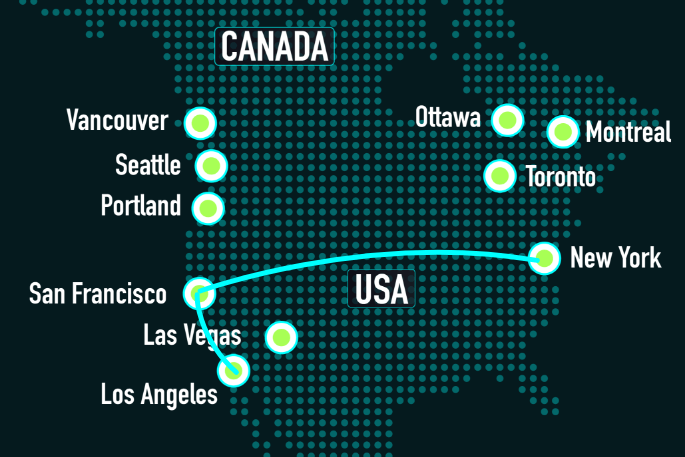 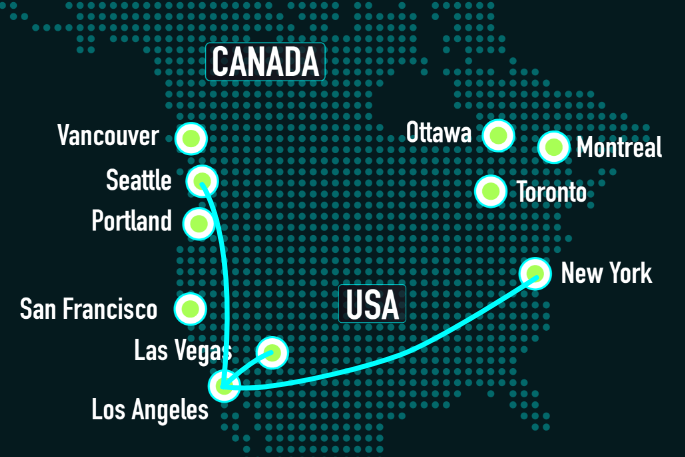 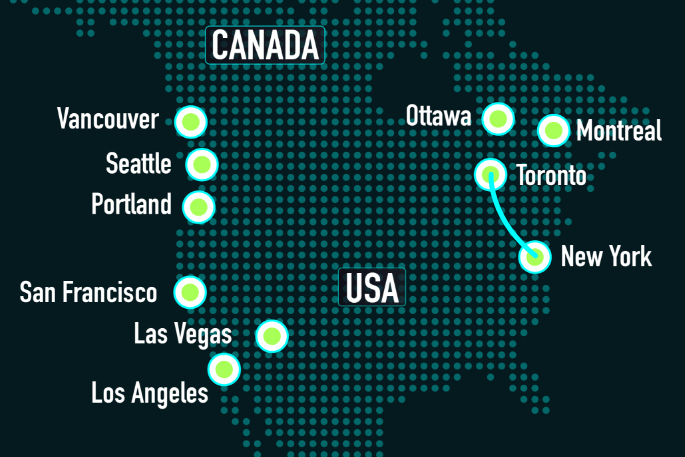 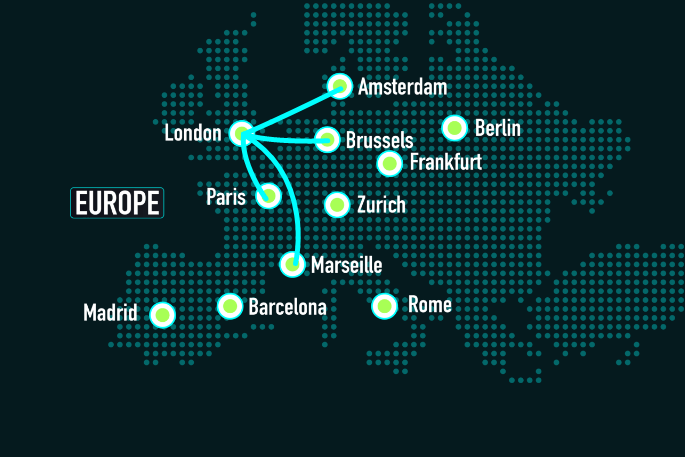 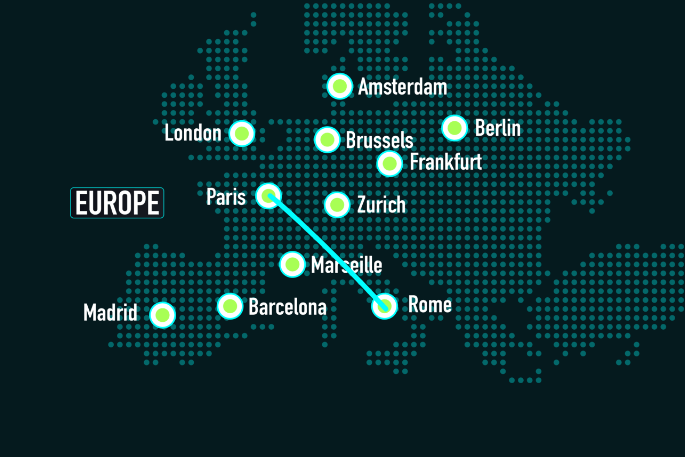 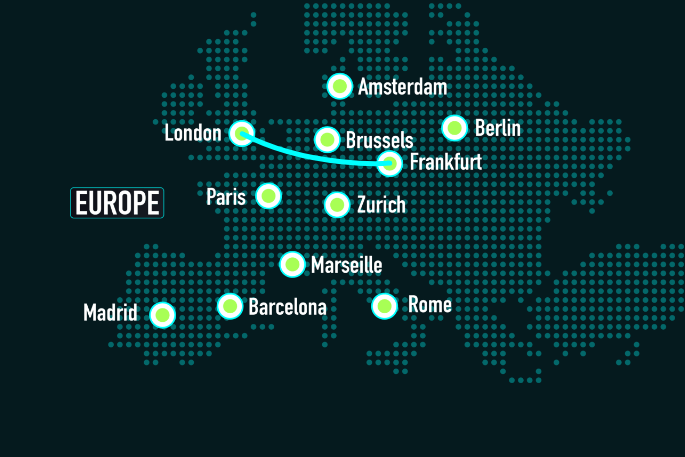 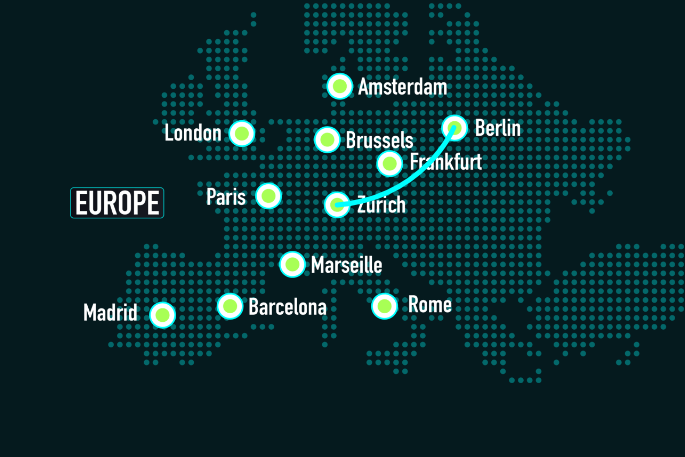 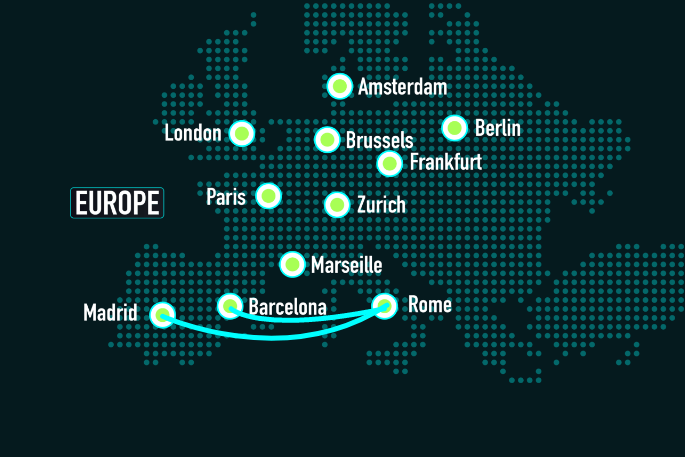 Love architecture? Well, if you took a 1,000km/h (621.37mph) train from London to Gare du Nord, Paris, you could walk around the Eiffel Tower about eight times before the standard high-speed train arrived at Gare du Nord.^ 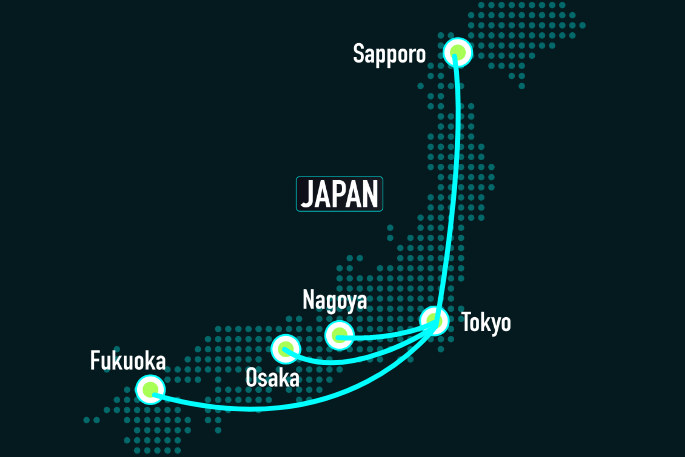 By the time the standard high-speed train rolls into Osaka station from Tokyo, you could have already ventured around Osaka Castle 11 times if you took a 1,000km/h (621.37mph) train.* 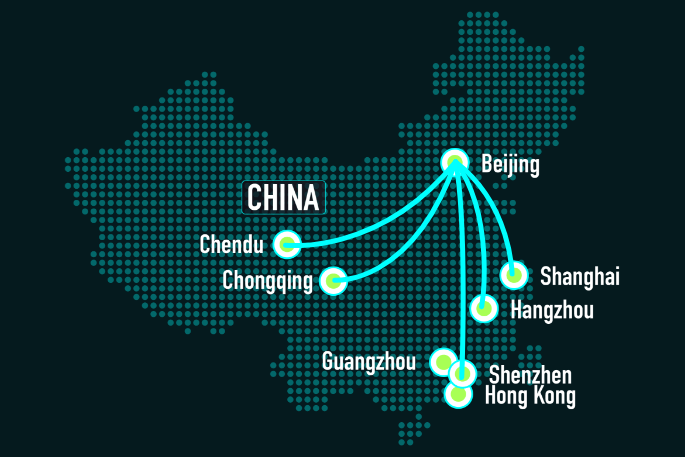 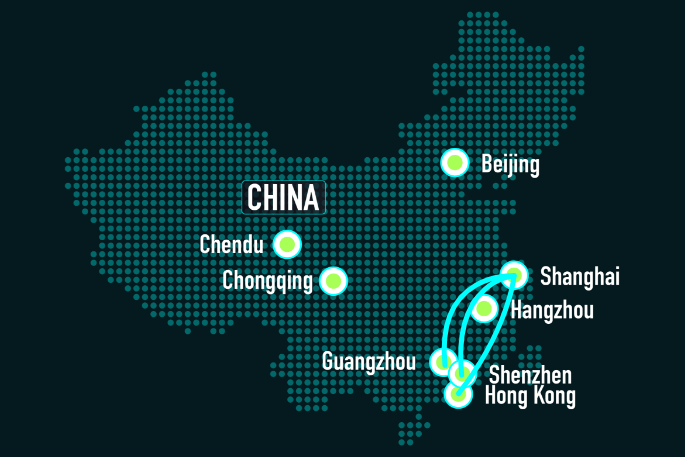 Shanghai (SHA) to Guangzhou (CAN) 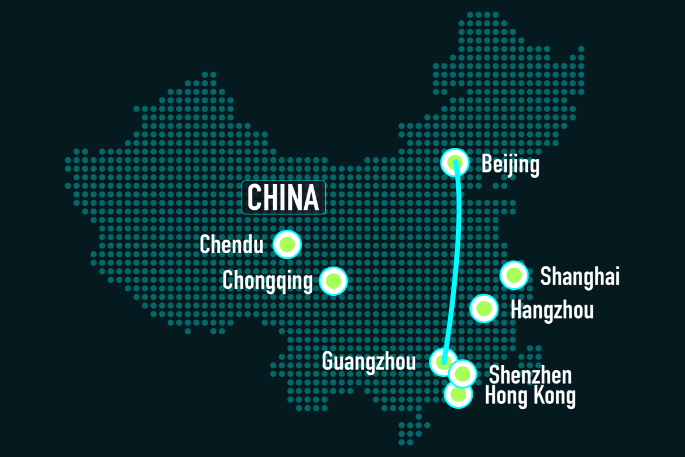 Guangzhou (CAN) to Beijing (PEK) 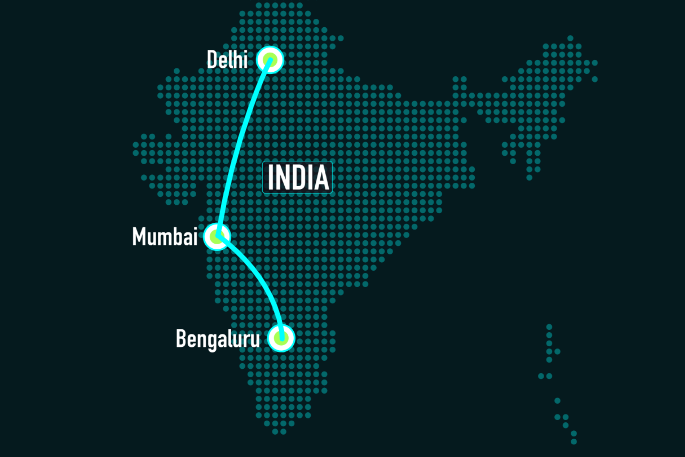 Whether you’re venturing through ‘the Land of the Rising Sun’ or another destination throughout the world, don’t forget to pack a suitable level of travel insurance for your next holiday.

Well, say your flight was cancelled or delayed due to a natural disaster, and you had bought a rail ticket for the trip from the airport to your hotel (which you’d now miss). Most comprehensive policies would cover the cost of a replacement rail ticket, so you aren’t left out of pocket.

What’s more, most policies will also cover your medical expenses if you fall ill or are injured while travelling overseas. Such overseas medical expenses can be extremely costly. Find out more about travel insurance.

Travel insurance policies vary from insurer to insurer, so remember to always read the policy’s Product Disclosure Statement (PDS) to know exactly what you’re covered for before purchasing. 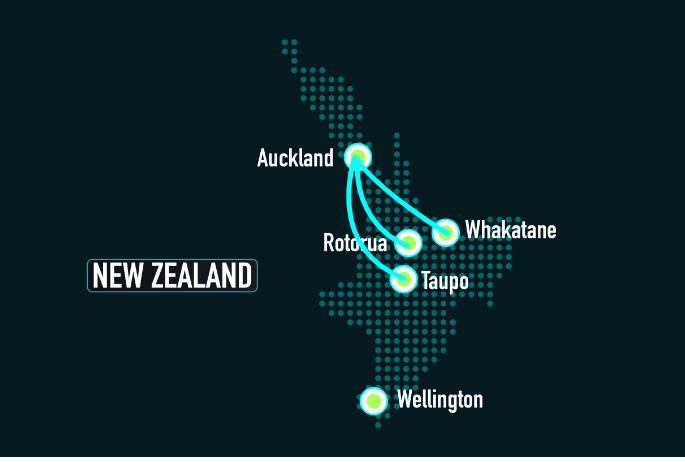 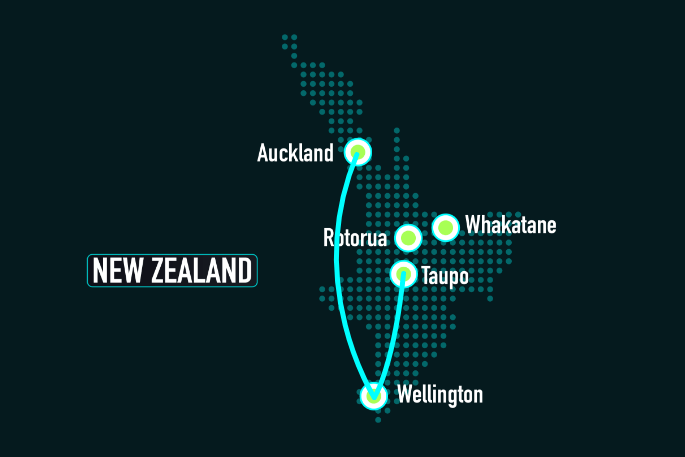 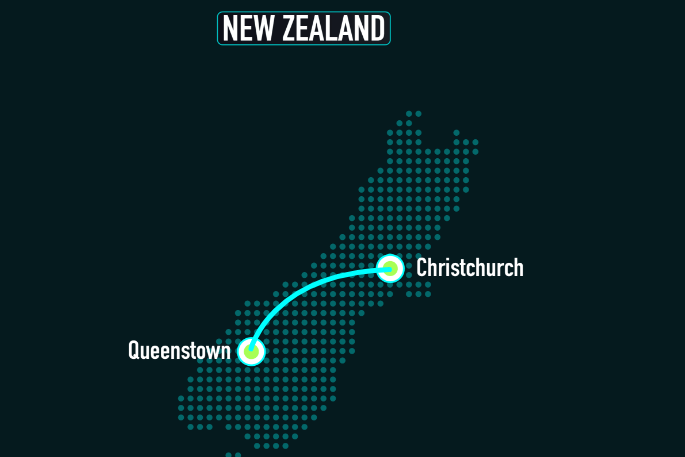 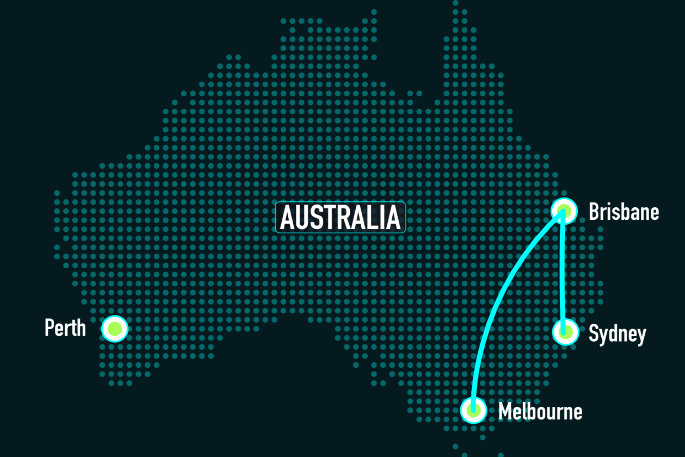 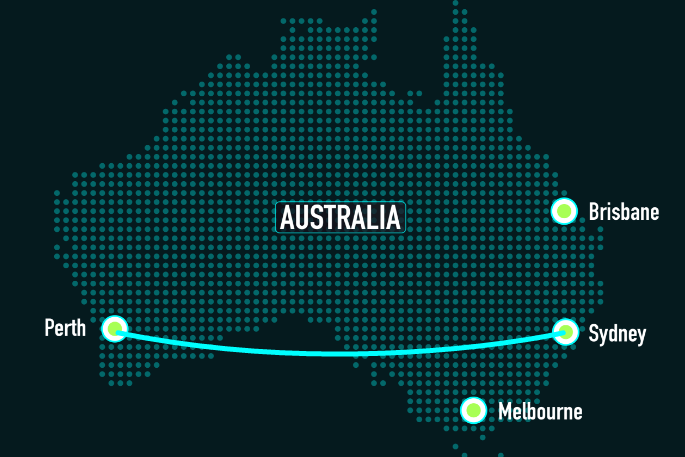 Sydney (SYD) to Perth (PER) 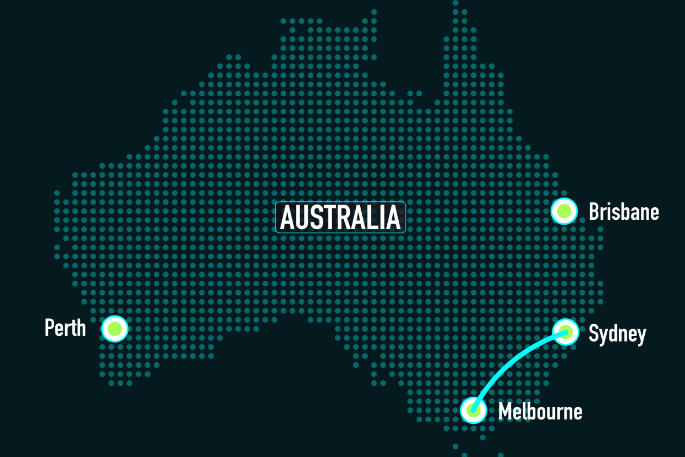 Think you could never afford to work in Sydney because of house prices? You could save AU$369,669 on housing4 if you lived in Brisbane and commuted under an hour to Sydney on the 1,000km/h (621.37mph) speed train.

Which countries are catching up to high-speed rail?

Bullet trains have been shooting through many cities and across country borders for decades now, ever since the first shinkansen transformed Japan’s commute in 1964.5 Nowadays, many high-speed trains boast speeds of up to around 320km/h (198.83mph).

With higher-speed rail technologies being tested, it’s interesting to see which countries are really pushing towards making such transport a daily reality.

China, home to the fastest ‘maglev’ train in the world at 430km/h (267.19mph), has tested a new maglev train prototype to hit records of 600km/h (372.82mph).6 These maglev trains use magnet repulsion to levitate the train from the ground, helping reduce friction and propel the train forward.

Virgin is also busy developing and testing the Hyperloop One; this train, which also uses magnetic levitation as well as a low-pressure tube, is said to one day carry passengers at almost 1,126km/h (699.66mph).7

But, what about some of the countries that aren’t yet reaping the benefits of bullet trains that are already gracing railway lines globally? What are their plans to better connect their cities, or their neighbouring countries?

It’s the collective sigh of many on their daily commute: ‘When will America and Canada get high-speed rail?’

While there is, at the time of writing, no train in America that boasts bullet-train speeds, there are moves towards faster travel in at least some parts of the country.

For example, the Washington State Department of Transportation (WSDT) is researching into ways it can implement ultra-high-speed ground transportation from Vancouver, British Columbia to Portland, Oregon.8

The WSDT defines ‘ultra-high-speed’ as a train operating at a maximum speed of over 402.33km/h (250mph). The following technologies could help this train come to fruition:

Aside from high-speed travel offering quicker commute times (less than an hour between each city), findings in the study estimate it could bring around US$355 billion in economic growth. The study also found that such transport could whittle down CO2 emissions by six million metric tons over the first 40 years of operation.

America’s appetite for faster rail services is also constantly whetted, given Virgin’s Hyperloop One Test Site is in the Nevada Desert. What’s more, a few cities in the country are exposed to the Hyperloop’s potential benefits during its numerous roadshows.10 Such technology stands stark against a landscape of long commute hours within – and between – some of America’s most populated cities.

Australia: Closer to faster than fastest

Over the years, particularly since the early 1980s,11 Australia has toyed with the idea of implementing high-speed rail services – and it has been met with its fair share of scrutiny.

Established on 1 July 2019, the National Faster Rail Agency supports and investigates opportunities for faster rail connections between major capital cities and their regional towns. This includes a commitment to a faster rail service between Melbourne and Geelong.

Two billion dollars are being poured into the latter to make it a reality under the Morrison Government. This rail service is said to cut the 80km (49.7-mile) journey between Geelong and Melbourne in half – to around 30 minutes. This is thanks to its proposed speed, which is an average 160km/h (99.41mph).12

‘Faster rail networks are crucial to easing congestion pressure in our cities and shaping Australia’s future as our population grows,’ Mr Tudge said.

Mr Tudge also explained that faster rail would help create jobs and give more time back to commuters, who could live more regionally and work in city-centres.

Sure, shorter travel times are the dream for holidaymakers and workers alike! But does current high-speed travel keep our plans on track for a healthier future?

Specifically, the company says a high-speed rail journey from London to Amsterdam emits 80% less carbon per passenger than an equivalent flight.14

Eurostar also says that since their service began from London to Amsterdam, 16,000 tonnes of CO2 emissions have been cut from passengers opting for high-speed rail instead of catching a flight.

And when it comes to the advances for faster high-speed rail, the environment is never far from front-of-mind.

According to a 2019 press release,15 the Virgin Hyperloop is set to be five to 10 times more energy-efficient than an aeroplane. It’s also set to use less energy than other high-speed rail while moving much faster.

The United Kingdom Government released a 2019 report outlining how many carbon emissions each mode of transport emits per passenger per kilometre.16 Notably, international rail, which covers high-speed rail like Eurostar, possesses the smallest carbon footprint: 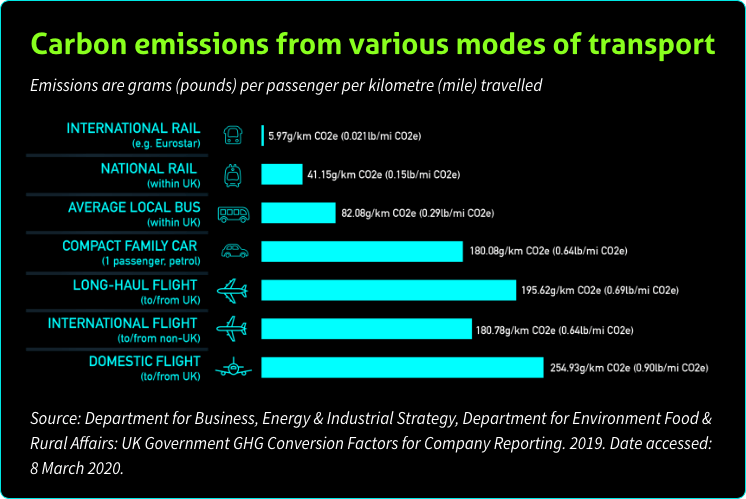 *Public transport can include train (and, in Japan, China and Europe, their current high-speed rail) and buses (or a combination) and can account for wait time based off its timetables. Flight times are nonstop and are gathered via Google Maps and Google Flights.

The 300km/h (186.41mph) standard bullet train used for Australia, USA, Canada, New Zealand and India is based on the already-existing median bullet train speed in Japan, Europe and China.

Keep in mind high-speed rail must be engineered to account for terrain, so all figures should be taken as a guide – a peek into what could be possible in countries that don’t have high-speed rail – or how existing bullet trains could travel even faster!

†Osaka Castle methodology: Based on average walking speed times of 75 metres (246 feet) per minute, as per Google Maps. The distance measured around Osaka Castle is 753.47 metres (2,472 feet). With the time saved by using a 1,000km/h (621.37mph) high-speed rail compared to public transport, you could have 1 hour 50 minutes 11 seconds spare at Osaka Castle before the standard bullet train arrives.

^Eiffel Tower methodology: Based on average walking speed times of 75 metres (246 feet) per minute, as per Google Maps. The distance measured around the Eiffel Tower on walkable paths is 944.11 metres (3,097.47 feet) (from Place de Sydney to around the tower). With time saved by using the 1,000km/h (621.37mph) train compared to public transport, you could have 1 hour 43 minutes 12 seconds spare at the Eiffel Tower before the standard high-speed train arrives at Gare du Nord.

Brought to you by Compare the Market: Making it easier for Australians to search for great deals on Travel Insurance.