When it comes to planning your next holiday, many of us are faced with the choice between a relaxing couple of days on the beach or a city break filled with sightseeing, culture and shopping.

But why not have both? Several of the world’s most popular city break destinations also boast world-class beaches on their shores, meaning that you can combine all the sights of the city with a relaxing bit of downtime in the sunshine.

If you’re struggling to choose a coastal city break destination for this summer, we’ve ranked 35 beach cities from around the world on things like the availability of things to do, places to eat, and the local weather.

Before booking your next coastal city break, be sure to compare travel insurance to ensure that you can relax in the knowledge that you’re covered.

Taking the top spot when it comes to the ultimate combination of city and beach is the city of Dubai in the United Arab Emirates.
Dubai has become one of the world’s most popular tourist destinations and is home to a number of five-star hotels, many of which also have their own beaches.
In our ranking, Dubai topped the charts when it came to two factors: the average annual temperature of 27.6°C and the average annual rainfall (just 160 mm).

Two cities are tied for second place, with the first being one of the smaller coastal cities on our list: Dubrovnik, in Croatia.
The city is located on the Adriatic Sea and is a major tourist destination, with the city itself being deemed a UNESCO World Heritage Site due to its outstanding medieval architecture and fortified old town.
Dubrovnik was a top-ranking city not just for the number of things to see and do (with 2,674 activities per 100,000 people), but also for the availability of restaurants too (1,487 per 100,000 people).

The other city that ranked in second place is Spain’s third-largest city, Valencia, which lies on the country’s south-eastern coast.
Besides the long stretches of golden sand, Valencia is known for being a city of arts and science, and is home to attractions such as a planetarium, oceanarium and interactive museum.
Valencia scored highly across the board specifically when it came to the safety of its streets (74.64 out of 100) and average annual rainfall (456 mm). 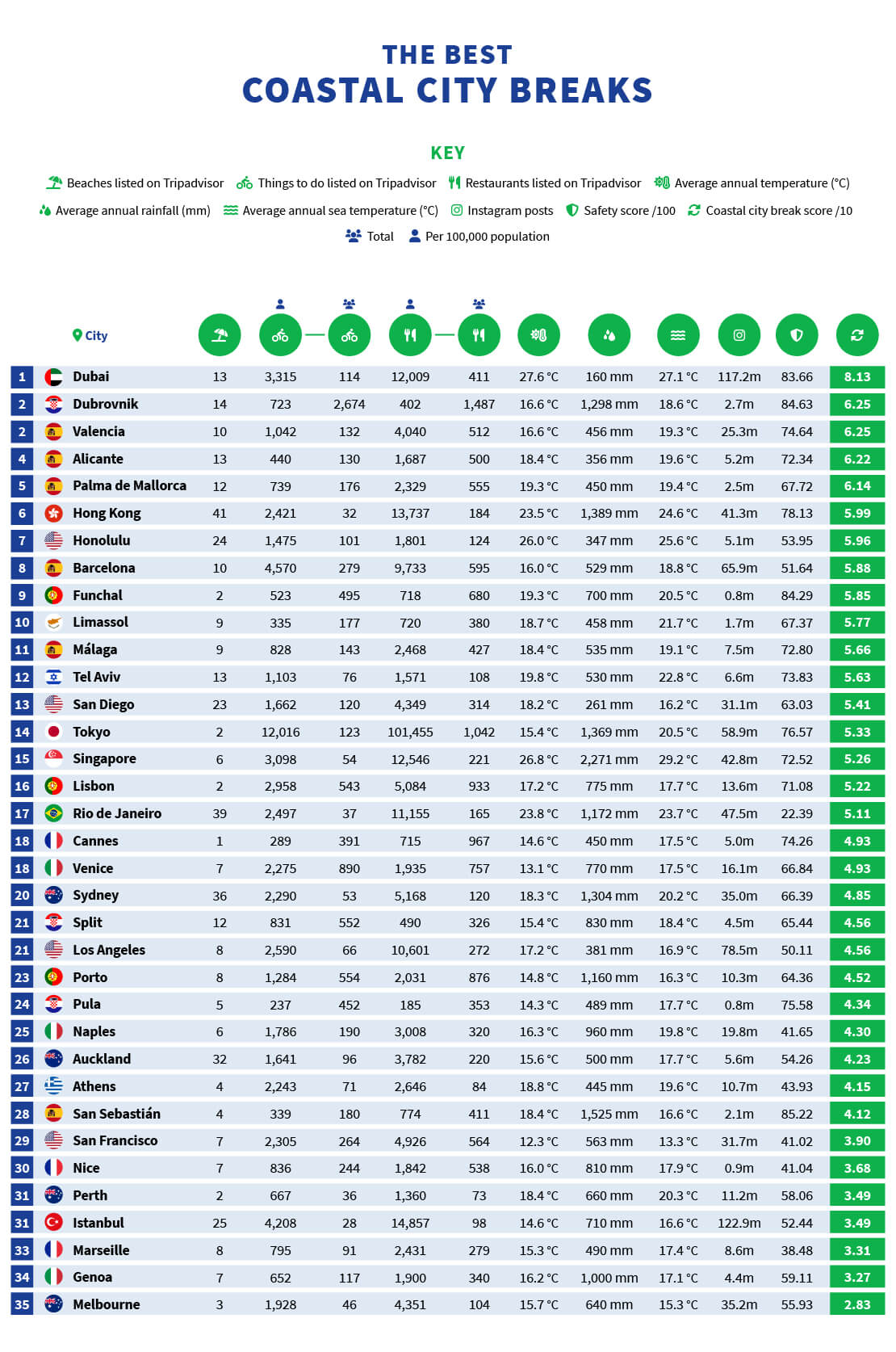 Perhaps the most important factor when deciding where to go for a beach break is, of course, the number of beaches available to you, and the top city in this regard is Hong Kong.
While it might be better known as a bustling financial centre with towering skyscrapers, Hong Kong also has many great beaches to enjoy with 41 in total listed on Tripadvisor, more than any other city that we looked at.

The best coastal city break for things to do

If you’ve had enough of beaches and want to do some city exploring,  the coastal destination with the highest concentration of things to do is Dubrovnik, Croatia.
The walled Old Town holds many landmarks and well-preserved buildings for tourists to see, including the baroque St. Blaise Church, Renaissance Sponza Palace and Gothic Rector’s Palace.

Sometimes the food can be the best part about travelling, and coastal destinations are no different, often serving up local seafood dishes.
Again, it’s Dubrovnik that excels here, boasting the most restaurants per person and everything from fresh local seafood to high-end fine dining establishments.

If you’re going to be relaxing on the beach, you want a destination where you’re guaranteed that the weather is going to hold out. The best city on our list in this regard is Dubai, which has an average annual temperature of 27.6°C.
The Middle Eastern city is situated in the desert; at the very peak of summer, it may even be too hot, but it makes for a great option for year-round sun.

Another thing that’s sure to ruin a city beach break is a downpour of rain, but again, Dubai is the best city when it comes to making sure that you stay dry during your vacation.
Being situated in the Middle East, Dubai very rarely experiences rainfall, with most days being sunny and the city receiving an average of just 160 mm of precipitation throughout the year.

If you’re planning on taking a dip in the ocean during your break, the temperature of the water is important, and the city which has the highest average sea temperature is Singapore, at 29.2°C.
Singapore has a tropical climate and temperatures are generally high all year round, although you’ll want to avoid the monsoon seasons from December to March and June to September.

The most Instagrammable coastal city break

Social media is a major source of travel inspiration, so looking at the number of posts of travellers sharing memories from destinations is a good way of gauging their popularity.
Here, Turkey’s capital of Istanbul takes the top spot, with over 120 million posts on Instagram mentioning the city in their hashtags.

Of course, safety always has to be a consideration when travelling, and the city where you can be assured you’re the least at risk is San Sebastián, on the Bay of Biscay.
While no city can claim to be completely crime-free and you should always be on your guard, it’s good to know that crime rates in San Sebastián are lower than other cities if you’re planning on visiting.

Brought to you by Compare the Market: Making it easier for Australians to search for great deals on travel insurance.