A deep dive into the dollar-difference between electric, petrol and hybrid cars.

Electric cars are meant to be better for the environment and for your wallet – but are they really the best value for your money?

In Australia, purchasing an electric car is often more than twice the price of their fossil-fuel counterparts.1

To put a dollar figure on the value of an electric vehicle (EV), we looked at an electric, petrol and hybrid version of the same car. We compared their purchase price and ongoing running costs to see at what point an EV could start saving you money.

We also assess the emissions levels from all three, as helping save the planet is a key motivator for many people choosing the more expensive electric-powered car. We used the Hyundai Kona SUV to crunch the data, as the Korean manufacturer has an electric, petrol and hybrid version.* We compared the purchase and running costs within Australia and within the USA, using local currencies and data on annual motoring costs.

Click through the tabs below to see what we found. 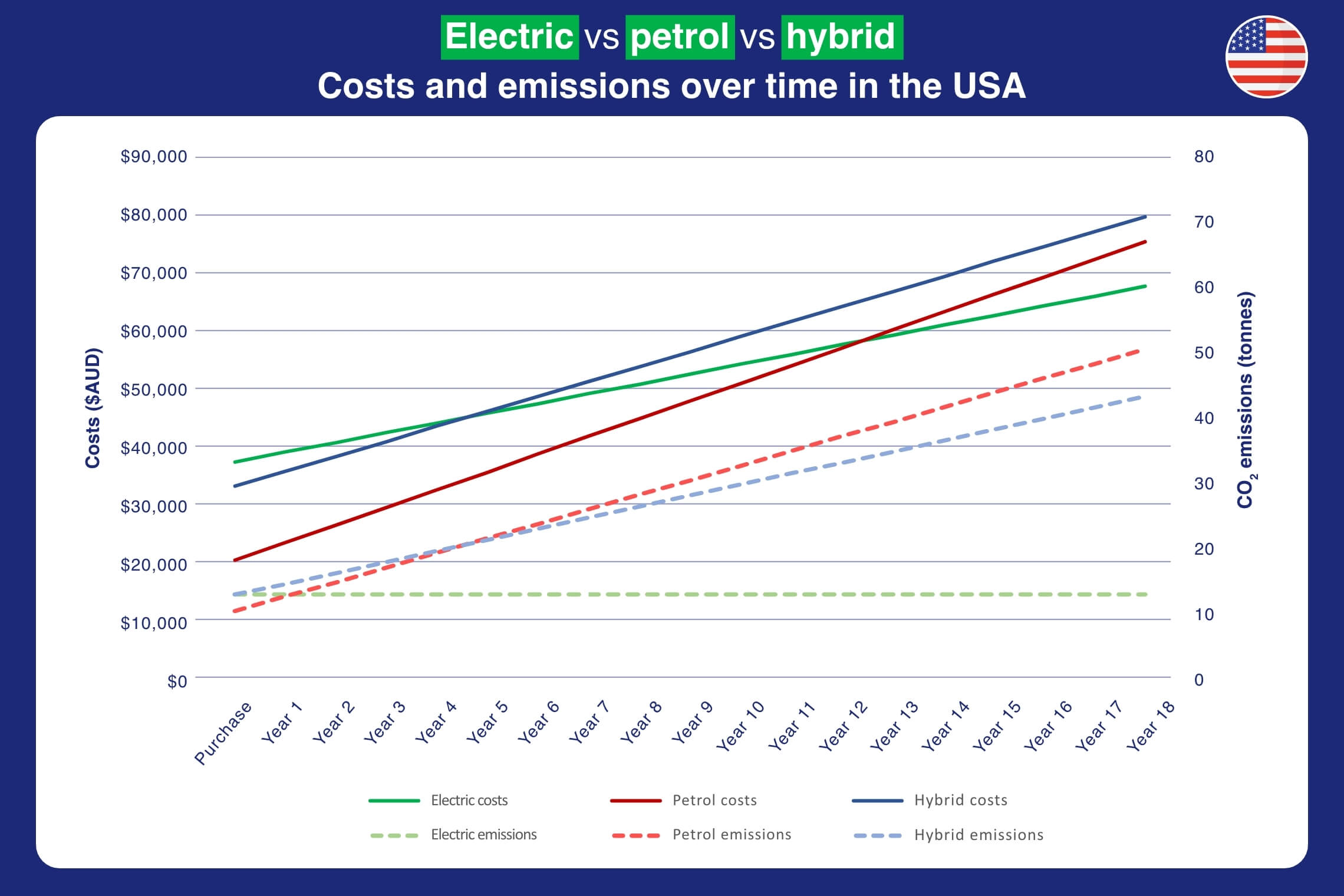 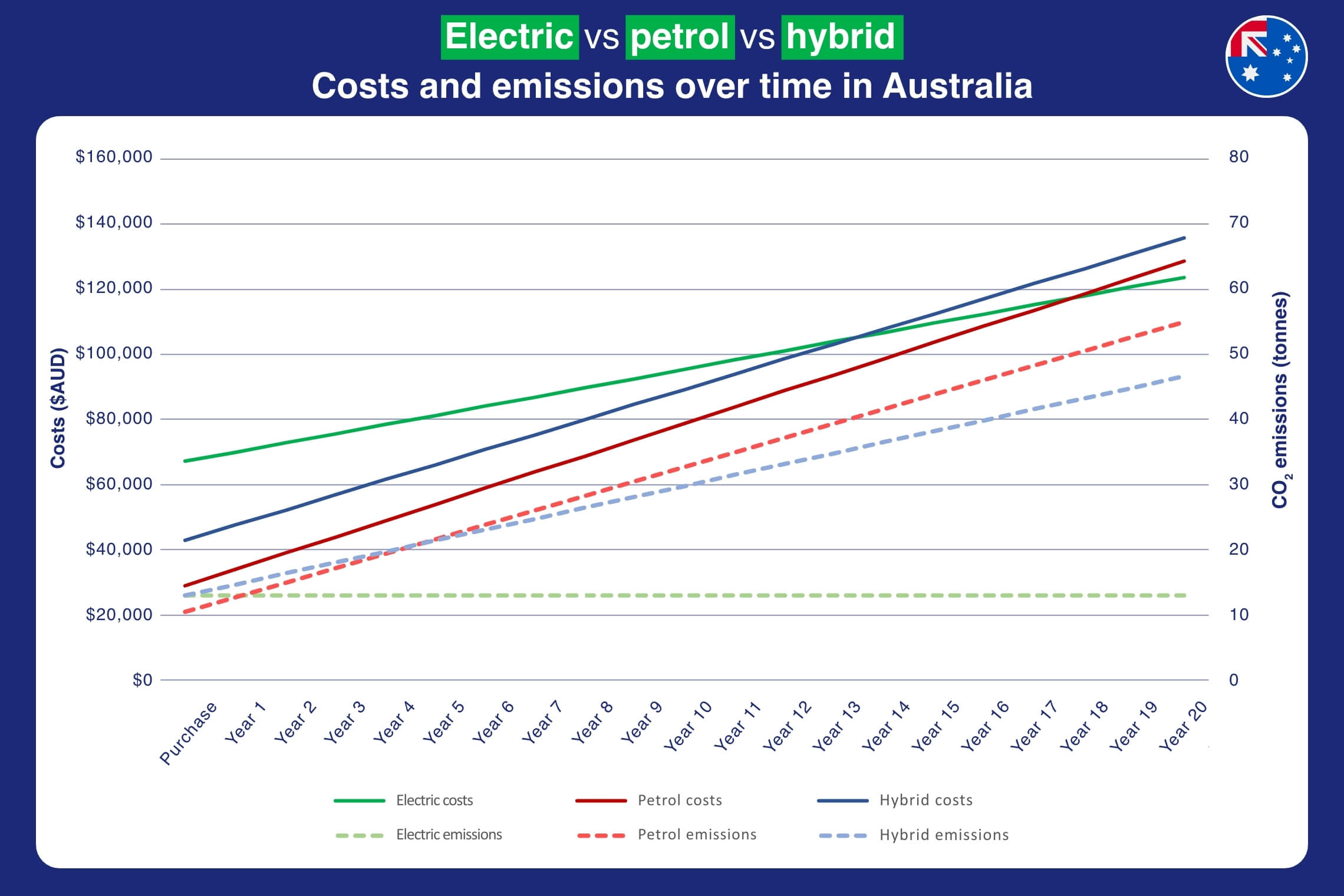 Electric vehicles will work out to be cheaper to own and operate than petrol-fuelled cars in both countries, but it takes years before comparative savings can be observed (13 years in the USA and 18 years in Australia based on our particular example with the Hyundai Kona). Given that the average lifespan of a car in Australia is 10.6 years,2 those who buy an electric car might need to hold onto it longer than usual before the total cost becomes cheaper than a petrol car.

The time it takes is shorter in the USA than in Australia, one of the reasons being because the basic Kona EV model is more affordable to buy in the states than it is ‘Down Under’.

Over the average lifespan of a new car (10.6 years), EVs have fewer total expenses compared to hybrids, and petrol vehicles are still tracking to be cheaper.

Of course, this is based on calculations for just one type of car, and these figures may vary for other vehicles. A breakdown or spike in the price of petrol will affect the numbers, so use these figures as a guide rather than a hard-and-fast rule.

What about emission levels?

The process of manufacturing electric vehicles actually produces more carbon dioxide (CO2) than the manufacturing of petrol engine vehicles. However, EVs produce no emissions, and in two years a petrol car will generate more CO2 emissions than its electric cousin will over its lifetime (including the emissions from manufacture).

The following facts are likely to affect the costs and value of EVs – and our buying decisions.

Electric cars might not be ‘worth it’ from a strictly financial sense right now but it is predicted they will be more affordable in a decade’s time.

However, from an emissions perspective, there’s no contest – provided the electricity that powers the car is generated from clean sources.

27 October 2021: Our calculations have been amended to more accurately reflect the running costs of an electric Kona. Based on calculations by the Electric Vehicle council, the average cost of charging a Kona is $384 per annum. Our original article projected the Kona would become cost-effective in 16 years. Using this updated figure, it would take an additional two years for the electric Kona to beat its petrol equivalent in terms of costs.

We used the baseline model to get the cheapest price advertised by Hyundai in Australia for the Kona electric and Kona petrol cars, and the UK price for the Kona Hybrid before converting the currency on 23/04/2021. The petrol Kona cost $28,990AUD, the electric cost $67,205AUD, and the Hybrid cost $42,942AUD to purchase. Costs include registration, where we used Queensland registration bands as the base registration on the engine of the vehicle. The electric and hybrid car cost $673 for 12 months of registration for the 2020-21 financial year, while the petrol car cost $744.45.7

The average lifespan was based on the average age of vehicles from the Australian Bureau of Statistics, which was 10.4 years as of Jan 2020.8

Petrol fill-up costs were calculated using the specs of the vehicle to determine its range, and the cost of petrol was estimated at $1.35AUD a litre for RON 91 fuel as this reflected a common price of petrol in Brisbane on 26/04/2021 using Compare the Market’s free fuel price comparison app.

The petrol version had annual refuelling set at $2,531.25AUD, while the hybrid’s fuel costs were estimated at $2,077.65AUD. The cost to recharge the electric version was based on an electricity tariff of 20 cents per kWh and using the full recharging time of 9 hours and 15 minutes. We also used an average figure of 15,000 kilometres driven per year and the car’s range to determine the number of recharges required to get a figure of $384AUD a year to recharge the car.

Insurance was calculated using Compare the Market’s free comparison service, based on comprehensive insurance for a white 2020 model with no finance or hail damage, garaged in Brisbane and driven by a 31-year-old male with no previous claims in the past five years. We used the quotes available on 23/04/21 to calculate an average annual figure for the petrol and electric car and set the cost of insurance for the hybrid model in-between these two prices to provide an estimate, based on the fact the cost of the Kona hybrid purchase cost is between that of the petrol and electric version. Annual insurance premium for the electric cost $1,299AUD, the petrol version cost $939AUD, and annual insurance premium for the hybrid was set at $1,119AUD. While it is unrealistic to expect insurance costs to stay the same over an 18-year period we set them at a consistent price for the ease of comparison.

Parts and servicing costs were based on average figures from Budget Direct’s article Car Running Costs in Australia 202010 and the Electric Vehicle Council Mythbusting11 page to arrive at an annual maintenance cost of $764AUD for the petrol and hybrid car and $464AUD for the electric car. This was supported by earlier research in an article by Lawrence Fulton in the Applied Sciences journal in 2018, which found maintenance costs for electric cars were roughly half of that of hybrids.12

These figures provided an annual operating cost which was used in the table above:

For the USA costs and emissions chart, the Kona electric purchase price was $37,390USD, while the petrol was $20,500USD. The hybrid purchase price was calculated at $33,238USD after converting the UK price into $USD using the historical currency exchange rate on 23/04/2021. For registration, we selected the state of Pennsylvania as they have a simple annual registration fee of $38USD per year as of 13/05/2021.13

Based on average fuel prices from all 50 US states, we were able to get costs for refuelling in the USA. Once we had converted different measurements and currency, we obtained an average gasoline price of $2.87USD per gallon.14 Using the same methodology as Australia, the petrol Kona had an annual refuelling cost of $1076.24USD, and the Hybrid had a refuelling cost of $1,166.96USD per year. Using data from the Alternative Fuels Data Center, annual recharging costs for the Kona EV were $270USD, based on the size of its battery, recharging time and at a cost of $9USD per recharge.15

The cost of insurance used data from the American Automobiles Association, which gave an average figure of $1,087USD per year. This figure was applied to all versions of the Kona to keep calculations simple, as the insurance market and risks differ to those in Australia, though exact costs will vary and will likely change every year. The cost of servicing was based on data from Consumer Reports, which found that hybrids and EVs cost half as much per mile in repairs and maintenance compared to petrol cars.16 This provided an annual cost of $297.62USD for the Kona EV and hybrid, and $838.85USD for the petrol version.

These figures provided an annual USA operating cost which is shown in the table above:

The figures used in the table are rough calculations based on available data and are intended as a guide and might not include every associated expense related to owning a car. Exact annual operational costs, such as the cost of registration, servicing or refuelling/recharging can change at any time. These calculations are also specific to the 2020 Hyundai Kona models and will differ for other vehicles based on their specs.

14. Petroleum and other liquids. U.S. Energy Information Administration, U.S. Department of Energy, Government of the United States of America. 2021.

Brought to you by Compare the Market: Making it easier for Australians to compare Car Insurance.