Which daily habits are making your drive dangerous?

Do you turn down the radio to see road signs better, or are you more focused on the latest gossip Twitter has to offer whilst driving? Regardless of the activity, many of us have a habit of getting a little too comfortable behind the wheel, allowing some less than stellar habits to sneak in – particularly those of us with years of driving experience.

Car insurance comparison site Compare the Market wanted to find out what cheeky habits have been creeping into our driving as we get more complacent with technology – habits which could be affecting our car insurance premiums.

Mobile phones have become ingrained in our lives, and it’s almost impossible to live without them. So it’s no wonder why we’re so attached to them, even while commuting. Our survey found that one in three Australians admit to using their phone while driving, increasing to 37% in Canada. In America, using a mobile phone in the car is commonplace, with 25 states having no restrictions on handheld mobile phone usage while driving (all states bar Montana have either a primary or secondary ban on texting while driving, and Missouri only has a texting ban for people 21 and under).1 With that in mind, it’s no wonder 55.4% of respondents admit to using their mobile phones. 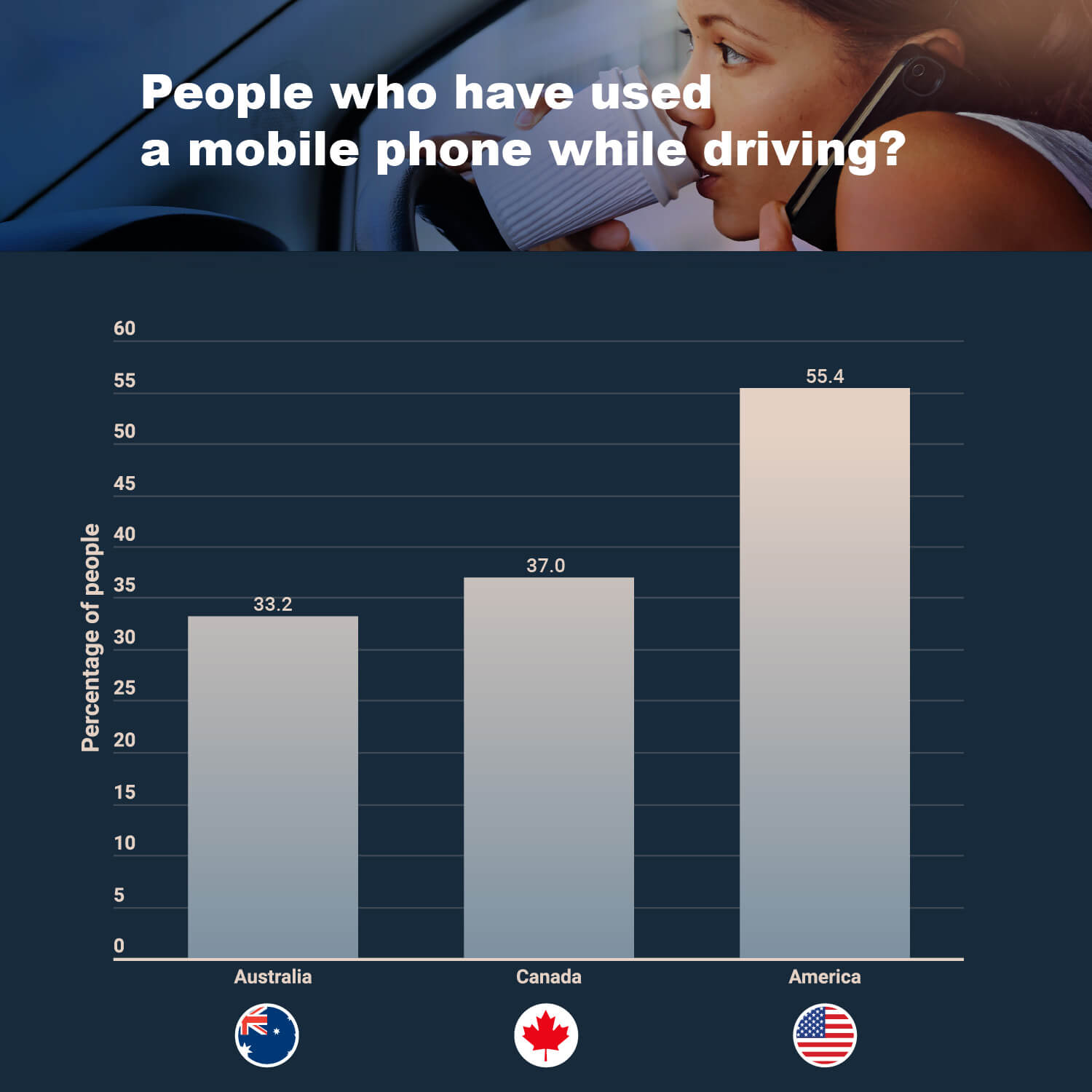 Across the 3 countries, the youth are leading the way with mobile phone usage. As many as 43.8% of Canadians aged 18-24 admitting to using the phone, while just under half (49.5%) of Australians aged 25-34 feel the same way. In America, 63.3% of those aged 25-34 also admitted to using their mobile phones; however, in a surprising turn of events, America is the only country that has its youngest cohort (ages 18-24) being the least likely out of all age groups to use their mobile phones (41.3%).

Gender also seems to play into mobile phone usage during a drive, with around two-fifths of Canadian and Australian men and three-fifths of American men admitting to doing so.

We then asked phone users what apps they’re on the most when driving. Most people from Australia admitted to texting (60.1%), whereas North Americans were most likely to use a navigation application (65.1% of Canadians and 67.3% of Americans). Coming in a close second, 57.7% of Australian drivers say they use a map app. Inversed, Canadians (53.6%) and Americans (55.5%) will look to text after checking their route. The third favourite app of drivers across the three countries was a music app, such as Spotify, to make sure road trips have the perfect vibes. 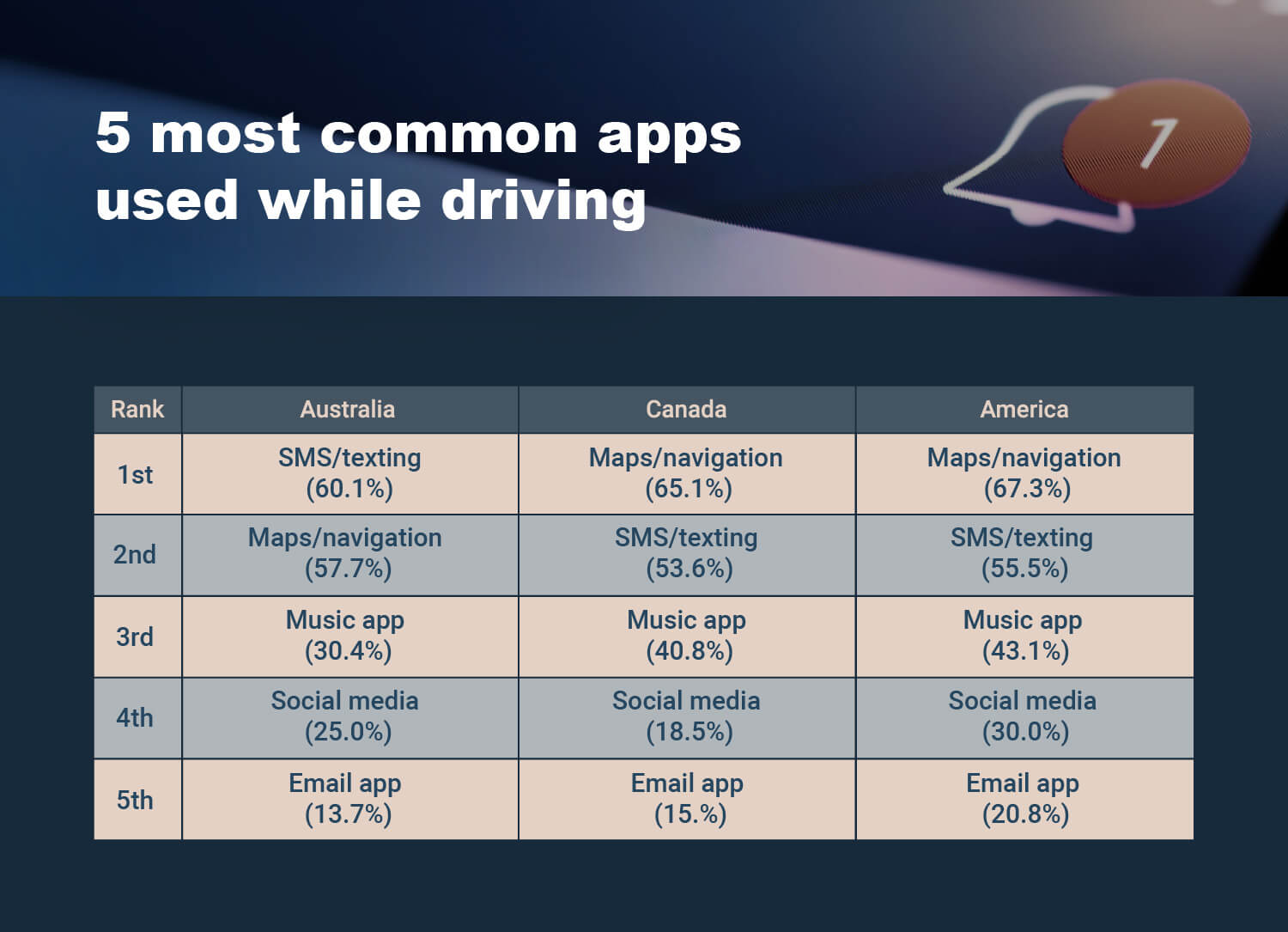 We were also curious to see if there was a difference in app preference by gender. We found that almost all male, female and non-binary people across all three countries use navigation as the main application on their mobile devices, except for Australian males who first and foremost prefer to text. We also found that respondents aged 25-34 in all countries were the most likely to be using their dating apps out of all other age groups.

Eating is the most common thing to do while driving

Last but not least, Compare the Market wanted to know what the most common habits in the car were.

Beating out all other answers was eating food whilst driving, with 57.1% of Australian, 55.6% of Canadian and 65.9% of American drivers admitting to refuelling on the go.

Although eating in the car is not technically illegal in Australia2 and America3 at the moment, it can result in fines if it is considered the cause of an accident or distracted driving. Canada is stricter, with some provinces/territories giving out fines more than CA$500, where appropriate, under the distracted driving laws.4 Speeding came out as the second most common thing people admit to in all countries, while similarly, sending text messages came third. 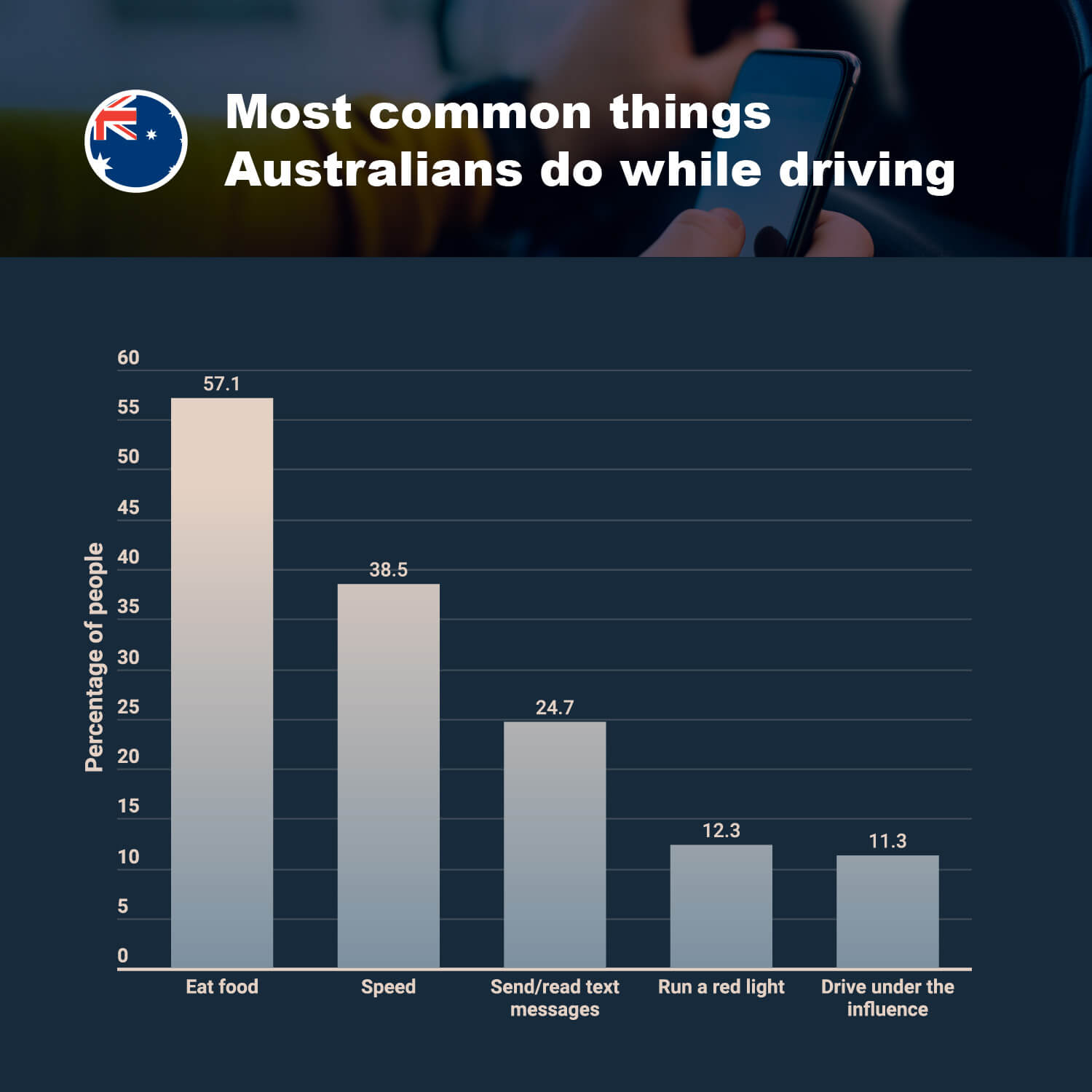 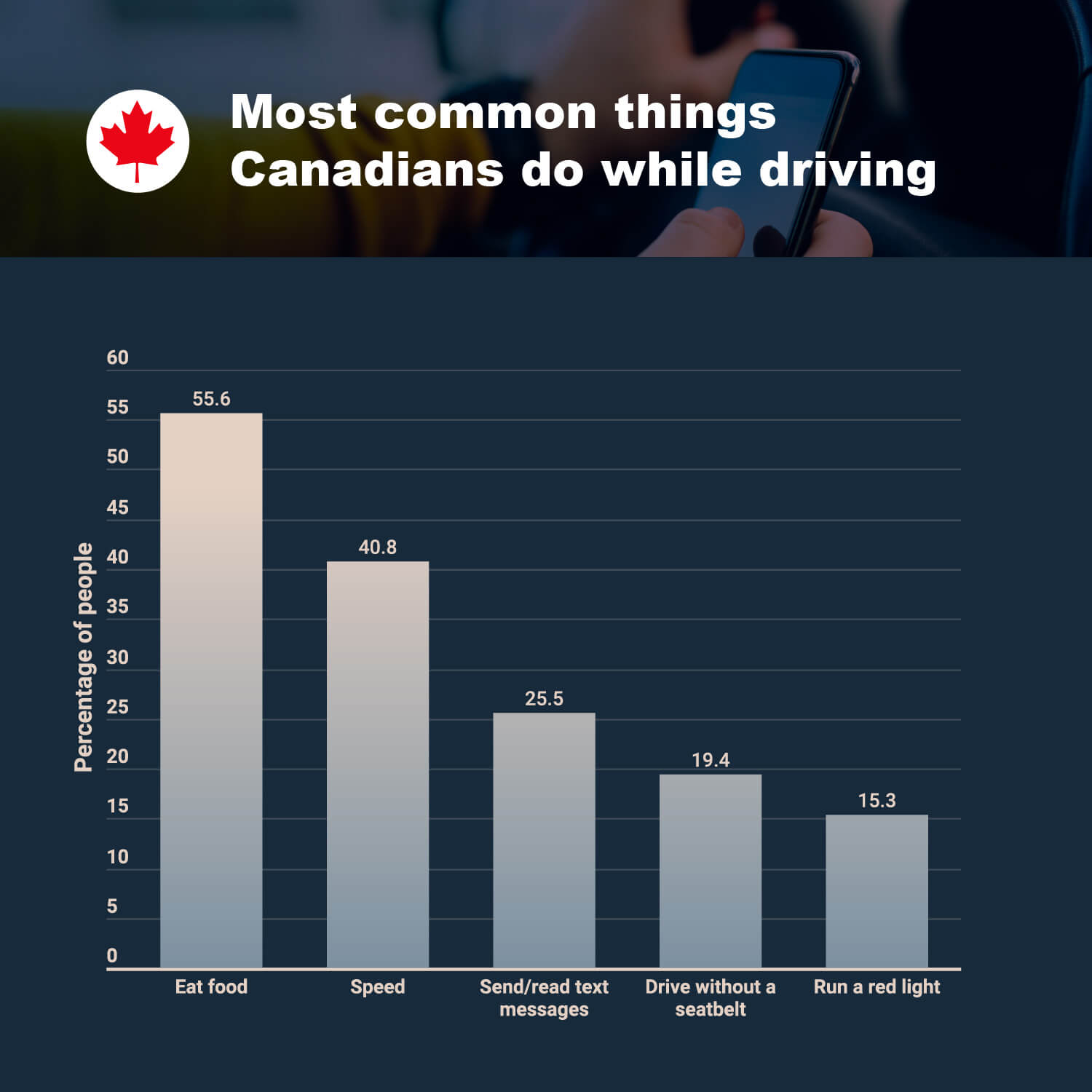 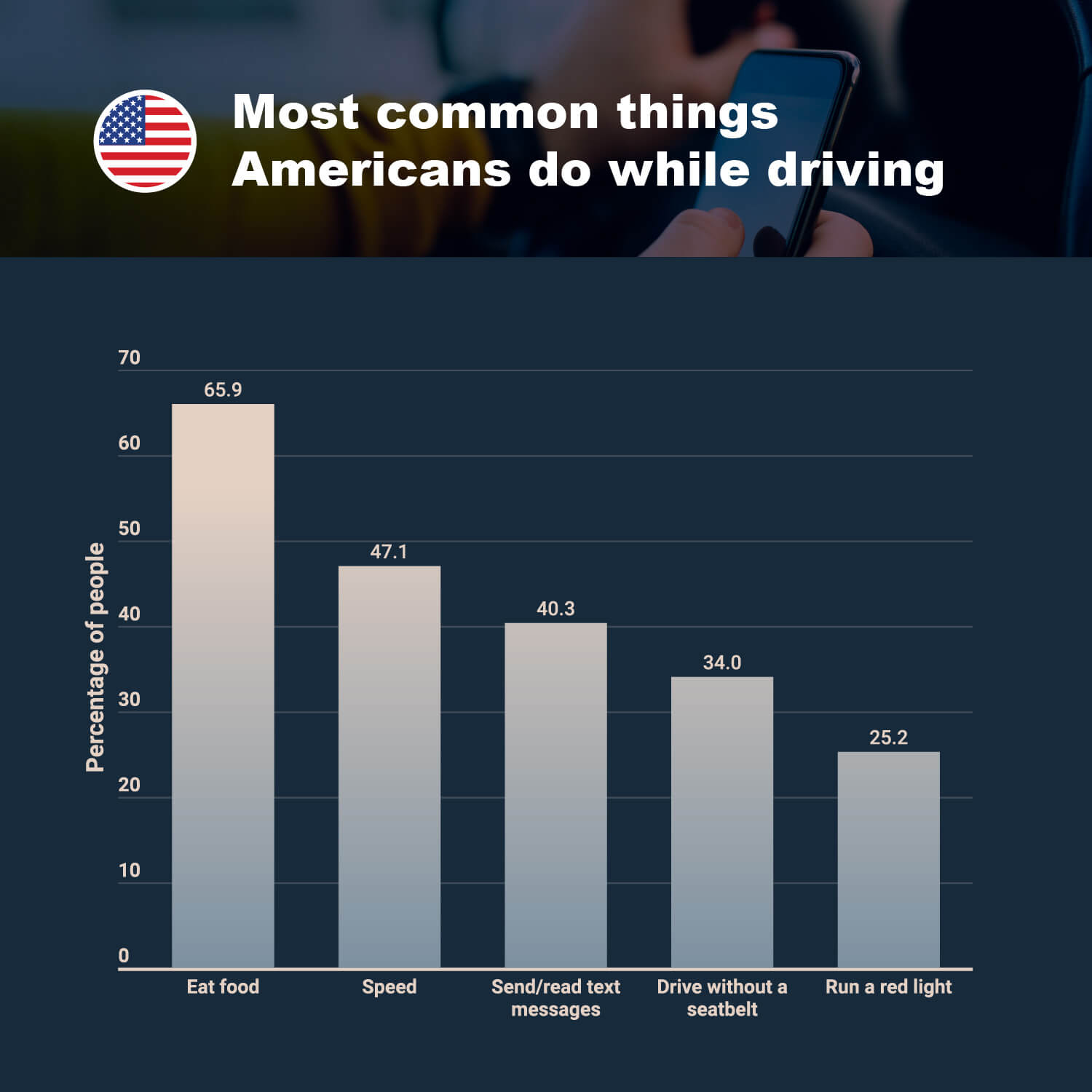 Compare the Market’s car insurance expert, Stephen Zeller, spoke about how even minor distractions in the car can lead to significant accidents.

“Many people seem to take driving for granted, and consequently, may become lax in the standards that they drive to,” Mr Zeller said.

“Seemingly, there are so many little things that sneak into our driving, such as grabbing a coffee to go or a quick bite on the way to work, checking a text or changing songs on a music app, but these minor lapses in focus can have deadly consequences.

“Even in cases where no accident has occurred, people may be given hefty fines for dangerous driving.

“It’s paramount for drivers to be focused on the road the whole time they are driving, and not to give in to those sneaky habits which can cause distractions because, while they may save you a minute or two in the short term, it could hurt you or someone else either physically or financially in the long term.”

It’s worth considering car insurance for those instances when you do have an accident, which may help you pay for repair/replacement costs, depending on your level of cover.

[3] Auto Collision Legal, Is it illegal to eat and drive?, Accessed 11/5/2022, https://autocollisionlegal.com/is-it-illegal-to-eat-and-drive/