Toyota reigns supreme as most searched car brand for 2021

Whether you’re hunting for your first set of wheels, looking at cars you can only dream about driving or simply searching for a vehicle to get you from point A to B, Google is likely the first pitstop on your car search journey.

But which car brands were people around the world searching for in 2021 and how did this compare to 2020? In a year where many countries continued to impose restrictions on the humble road trip due to the COVID-19 pandemic, it was Toyota that once again reigned supreme.

By analysing Google Trends data for the top searched vehicle brands for 154 countries on Google in 2021, we created a map that showcases which vehicle brands were most searched in each location. 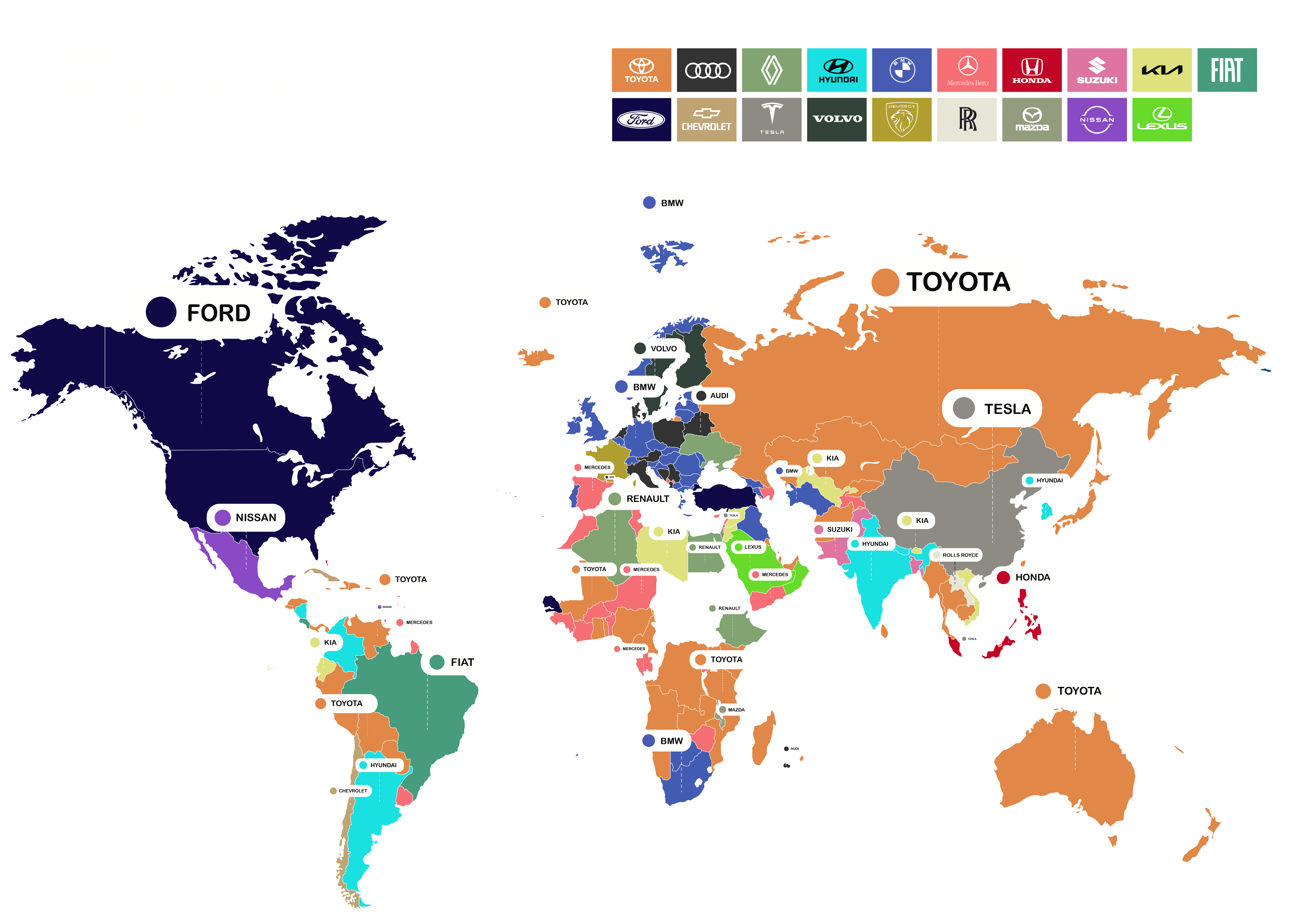 Japanese car manufacturer Toyota, was overall the most searched car brand in 2021. Our research shows it topped searches in 47 of the 154 countries analysed – representing around 31% of all searches. However, this is down from the 34.8% of top searches it secured in 2020.

A possible explanation for Toyota’s slight dip is that several other car brands saw increased search interest in 2021. For example, Audi and Hyundai both saw reasonable leaps in searches compared to the previous year, where each increased their ranking by 2 places. Meanwhile, Rolls Royce and Mazda topped searches in countries for the first time in our analysis since 2018.

However, there are also reasons why interest in Toyota remains high. In November 2021, Toyota Gazoo Racing announced that it would start reproducing spare parts for its Corolla Levin and Sprinter Trueno makes.1

These parts had previously been discontinued, but with the reintroduction of them, car lovers could continue driving and enjoying vehicles from the past. Toyota also announced a suite of other vehicles in 2021. This included electric cars that reduce CO2 emissions,2 the world-first Corolla SUV3 and a completely redesigned Land Cruiser.4

Toyota tops the competition, but Mercedes is gaining

Toyota, BMW and Mercedes continued to dominate Google searches around the world in 2021 and maintained the top three positions for a second consecutive year. While Mercedes remains in third place, it has taken a few countries from Toyota and BMW. This has closed the gap significantly.

However, it’s interesting to note that on average across the past four years, BMW holds the title of the top searched brand in more countries than any other competitor. This could be attributed to a significant peak in search results throughout 2019, where BMW took first place in 118 of the countries we analysed.

For the first time in our analysis, we wanted to know how much interest was in the electric vehicle and clean energy company, Tesla. We found that in 2021, it was the most searched vehicle brand in Hong Kong, Israel, Macao, Singapore and China.

Tesla offered several vehicles in 2021, including its Model S, Model 3, and even the Semi truck.5

While Toyota, BMW and Mercedes are popular in many countries, our analysis shows that interest in car brands continues to change worldwide.

Audi and Hyundai, for example, appeared in more Google searches in 2021 compared to 2020. Audi more than doubled the number of countries where it appeared as a top search, moving from 6th position to 4th position.

In contrast, Ford, Volvo, Nissan and Peugeot appear to be running out of motor when it comes to search interest, with each brand’s ranking dropping by at least three places. In addition, Volkswagen, Mitsubishi, Alfa Romeo and Daewoo are all brands that dropped out of the race and didn’t make the list for top searched vehicle brand in any country in 2021. 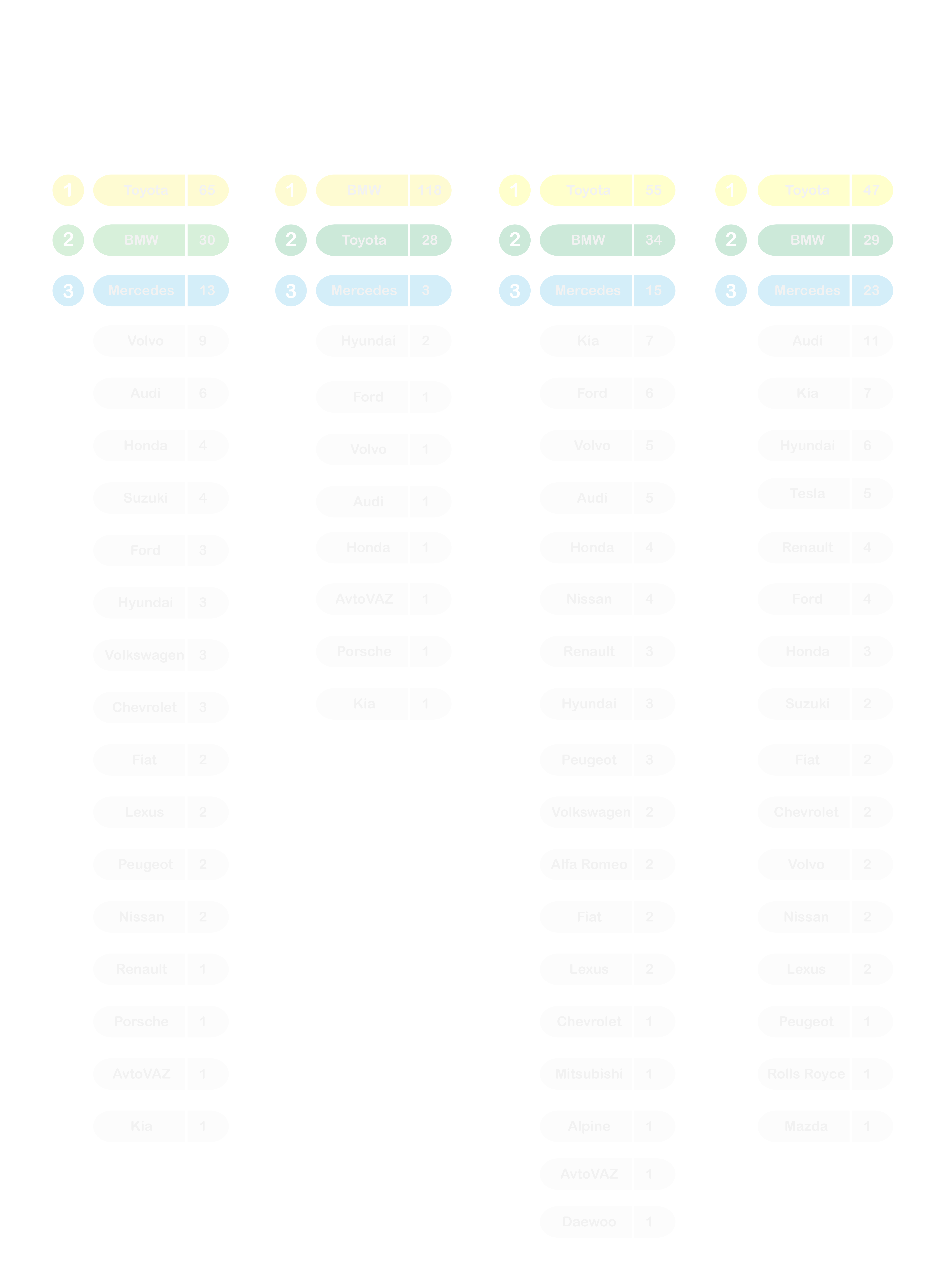 To obtain this information, Google Trends data was used to determine the most-searched vehicle brands for countries around the world between 2018 and 2021 where data was available. While Google Trends doesn’t recognise Tesla as a “vehicle brand”, we’ve included it in our 2021 analysis. If Google search interest for Tesla was higher than any of the top three vehicle brands observed by Google Trends, we added it into its rightful place in the ranking. Some countries had limited or no data at all and were omitted from the list. Similarly, we’ve excluded brands or search terms that weren’t car brands from the list.