Across the world, architecture and building design vary dramatically, giving us beautiful diversity of architectural styles that define different regions. From Tudor style villages in Britain to powerful Gothic revival buildings in Spain and complex colonial structures in Australia, there are so many different design styles to love – but which styles do people love the most in countries across the world?

We wanted to see what styles people in Australia, the USA, Canada, and Europe take to the internet to speak positively and negatively about the most – which style do you think will come out on top in your country? Read on to find out!

The top 10 architectural design styles across the world

To determine the most well-known architectural styles, we’ve teamed up with Stephen Gale of CK Architectural to reveal which style has the most positive and negative sentiment across Europe, America, Canada, and Australia. When it came to which styles were most loved by our chosen countries, these styles came out on top (and bottom!).

The most loved architectural styles 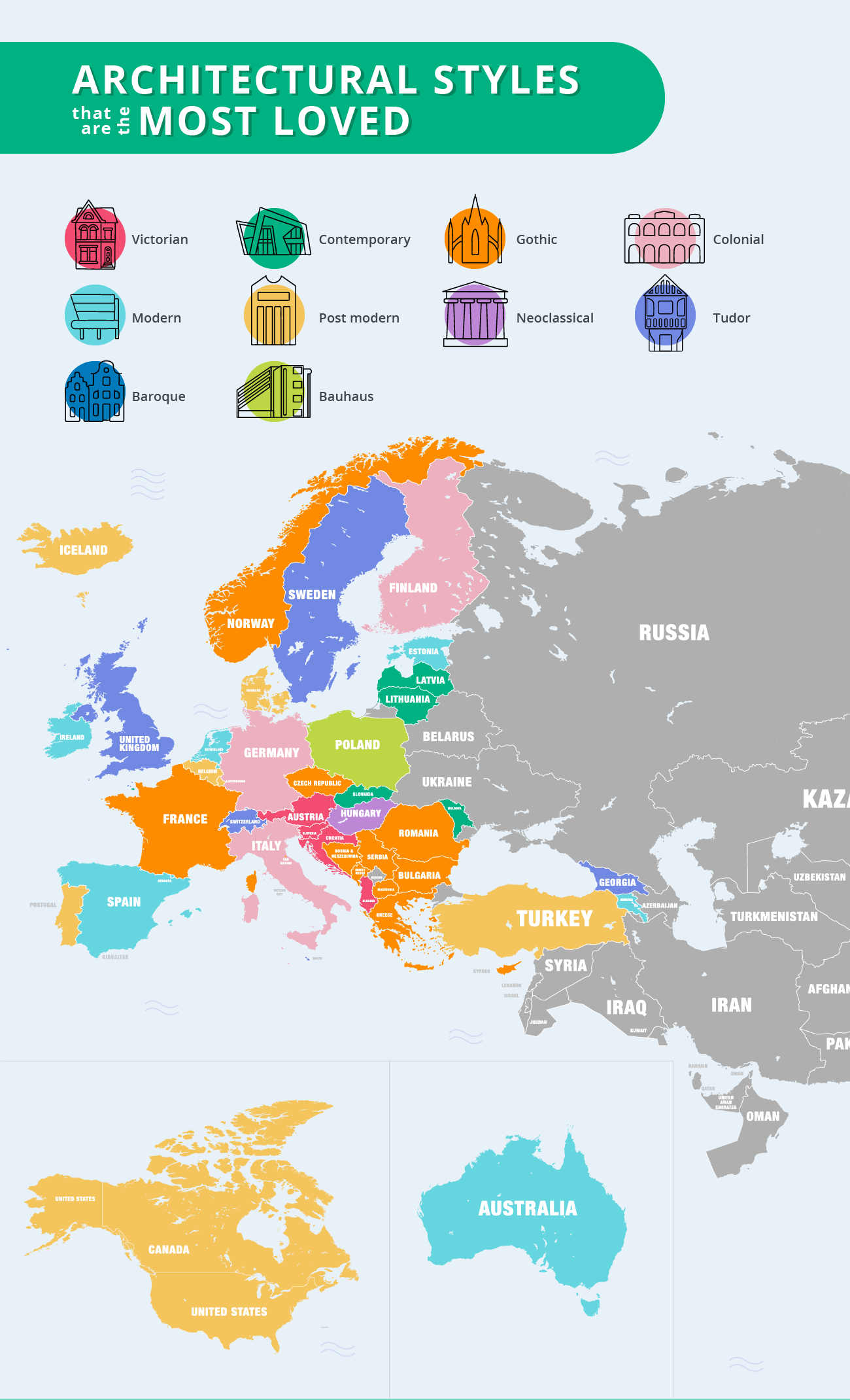 There are 13 countries that love this iconic style of architecture the most, including France, Greece, Romania, the Czech Republic, Montenegro, and Norway. Gothic architecture is centred around stone and masonry, and can be seen in some of the most famous buildings in the world, especially churches and cathedrals all across Europe such as Paris’ Notre Dame.

Contemporary architecture is best loved by five different countries, including a lot of Eastern European countries (like Lithuania and Slovakia), as well as Jersey. Contemporary architecture covers the majority of residential buildings created in the latter half of the 20th century rolling into the 2000s. Typical features include a combination of more generic and simplified architectural characteristics, as well as using more glass than may otherwise be seen previously.

Australia, Andorra and Ireland are amongst the seven countries which are big fans of Modern architecture – a style which combines technology and functionality by eliminating ornament and decoration. Its main characteristics is the use of plate glass, cast iron and reinforced concrete, and the style was widely adopted at the end of the 19th century.

Liechtenstein, one of the smallest countries in Europe, has big ideas for architecture! Baroque architecture has many shared notions of Gothic architecture but is more typically centred around emotive Italian culture, which utilises spheres and domes as crucial points of the building they create and captures the eye no matter where they’re placed. The most famous example would be St Paul’s Cathedral in London, but the style is commonly seen across Europe.

The most disliked architectural styles 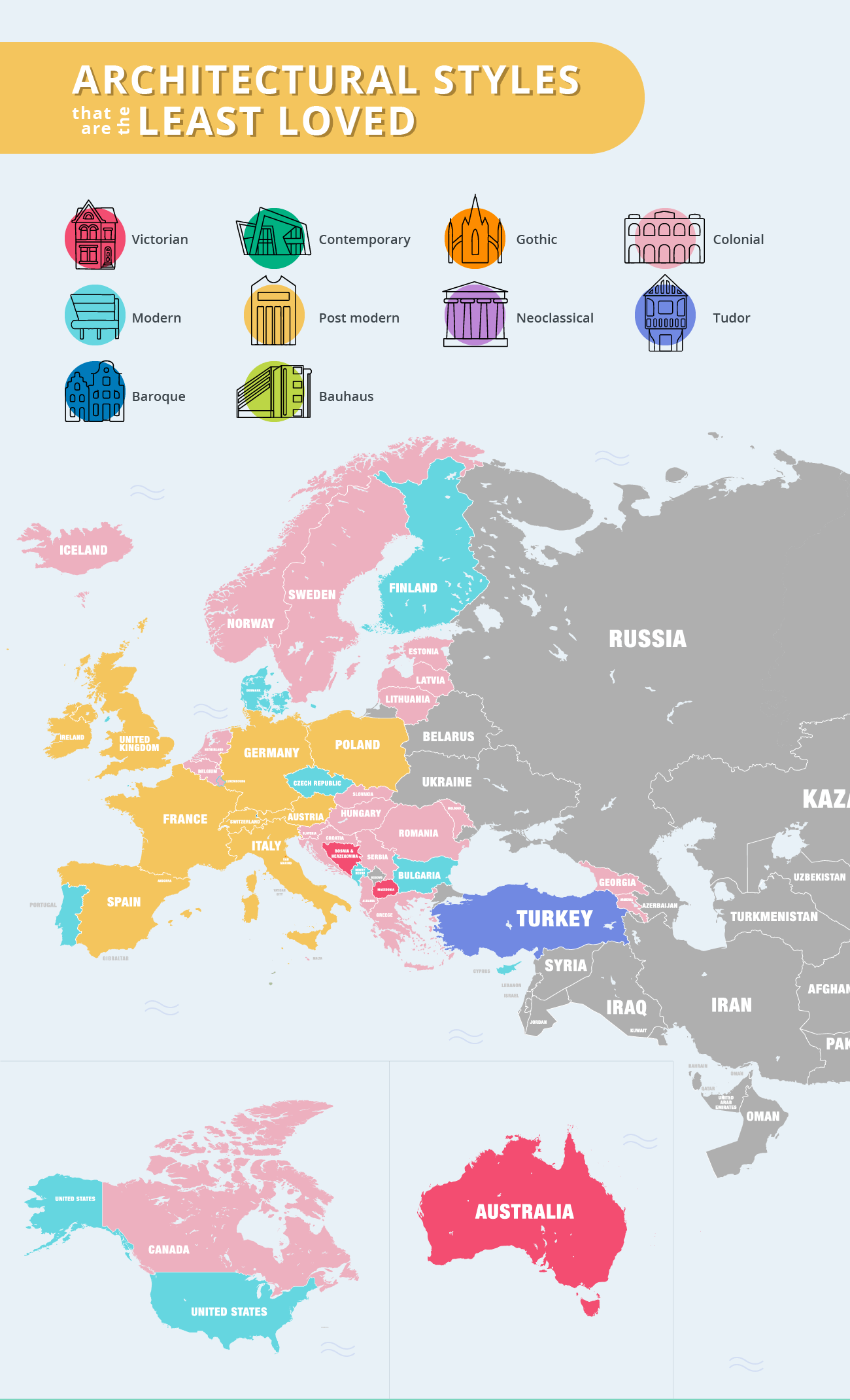 23 out of our 54 nations reported disliking colonial architecture the most, including some big names like Greece, Canada, and Iceland. Furthermore, around 24% of online architecture discourse out of the Faroe Islands was of negative sentiment towards the style!

12 countries are not keen on the style of Modern architecture, including the USA, Portugal, Denmark, and Finland. Modern architecture is typically glass and steel-heavy buildings, like the Shard in London or any of Australia, America, or Asia’s latest skyscrapers. They also incorporate modern and cutting-edge materials as and when they are developed.

Many of these new materials are developed to improve structural strength and thermal performance, and to also be more sustainable and generally more environmentally conscious. More commonly used for commercial than residential construction, modern architecture is truly iconic and will certainly be something the 2000s will be recognised for.

Post-modern architecture is unsurprisingly not well-loved in Europe, particularly amongst smaller, traditional countries like the Vatican, but also in plenty of larger countries that have more progressive architecture (including Spain, the United Kingdom, Germany, and France).

As one of the most interesting and diverse architectural styles, postmodernism was created to counteract the uniform styles that were developing from modern and contemporary architecture. This style has inspired some of the most iconic 20th century buildings in the world, from the Sydney Opera House to all kinds of structures being erected even today.

Turkey is not into Tudor style – 3% of Turks have reportedly expressed negative sentiment towards the style online. Tudor and subsequently Tudor revival came again from England and is commonly seen in black and white cottage style buildings with thatch roofing in some cases. Truly iconic of the period, it’s hard to miss where it can be found.

So, if you’re moving over to Europe or the USA, you’ll know for sure what styles of homes you’re likely to have on offer! If you’re looking to upgrade from your Tudor home to a contemporary home in favour of the trends, why not compare home loans from different mortgage providers to find the best deal you can.

To find the most and least popular architectural styles, we used the Linkfluence sentiment tool, which crawls data on mentions across the internet from the past 12 months. This helped us to pick out the styles with the largest percentages of positive and negative sentiments, to determine which style people talk about the most positively and negatively per country.

Brought to you by the home and contents insurance experts at comparethemarket.com.au.