Where are the best cities to earn as an Airbnb host vs private landlord?

With the rise of staycations and the ability to work remotely from anywhere with an internet connection, more and more people are turning to Airbnb for a little extra cash to pay off their home loans while they’re away.

We have analysed more than 90 of the world’s most popular tourist hotspots to find out which destinations are the most profitable for prospective Airbnb hosts. We also looked at which cities are best for conventional landlords and which cities have the largest and smallest gaps between Airbnb and rent prices.

The best cities to earn with Airbnb 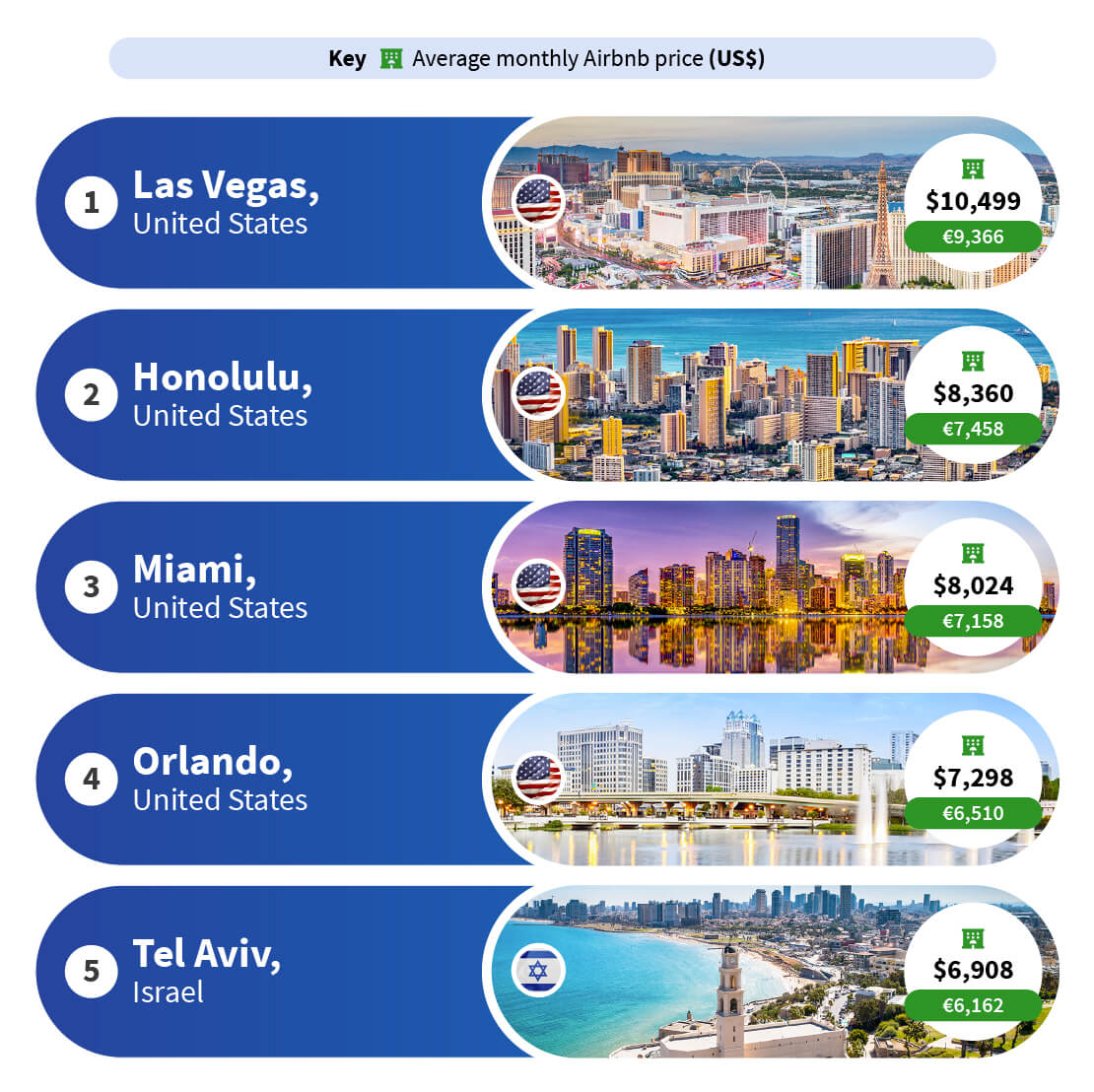 Average monthly Airbnb price: US$10,499
‘Sin City’ attracts travellers from all over the world for its shopping, entertainment and, of course, gambling. This city is the most profitable on our list as the average Las Vegas Airbnb listing is more than $7,000 higher than the overall average. With an average price of more than $10,000 a month, Airbnb is an attractive offer for locals looking to make some extra cash.

Average monthly Airbnb price: US$8,360
The largest city in Hawaii is popular with tourists for its moderate tropical climate, natural scenery and white sandy beaches. However, its relative isolation from the mainland US results in a high cost of living for locals, with the average monthly rent being $2,763. These factors could explain why it ranks second on our list, as hiring an Airbnb is $5,597 higher than renting.

Average monthly Airbnb price: US$8,024
This city boasts year-round sunshine and temperatures that rarely drop below 24ºC (75.2ºF). Also renowned for its nightlife and golf courses, there’s plenty to attract a diverse array of travellers to the second coastal city on our list. Average Airbnbs in this city are $5,123 more expensive per month than renting, so are a great opportunity for out-of-town locals to earn some extra cash while they’re away.

Average monthly Airbnb price: US$7,298
As the second city in Florida on our list, Orlando is a popular destination for families, being home to seven of the world’s top theme parks, including Walt Disney World and Universal Orlando. It also provides the perfect base to explore the rest of the state, making it attractive to more adventurous tourists. Homeowners have recognised the appeal of holidaying in their city as Airbnb hosts charge $5,397 more per month than rent.

Average monthly Airbnb price: US$6,908
This city is located on the Israeli Mediterranean coast, known for its stark 1930s Bauhaus buildings and also as a popular nightlife destination in the Middle East. Tel Aviv has also been referred to as ‘The World’s Vegan Food Capital’, home to more vegans per capita than anywhere else in the world. Airbnb hosts in this city charge $6,908 on average.

The 5 best cities to earn as a private landlord 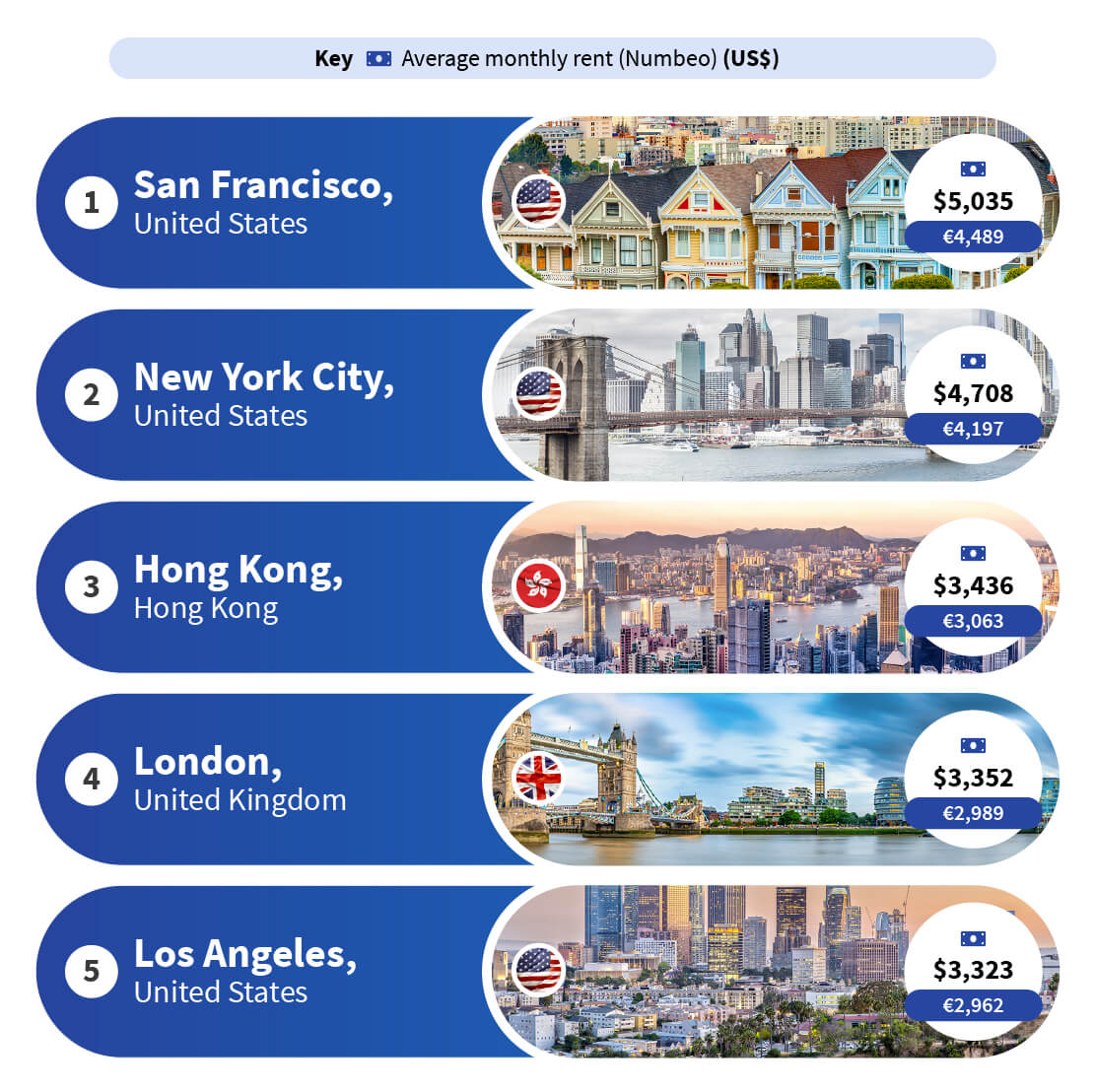 Average monthly rent: US$5,035
The city where locals can make the most by renting out their properties privately is San Francisco, where the average rent is more than $5,000 a month. San Francisco is a very densely populated city and an important cultural, commercial and financial hub, with high levels of income and cost of living.

Average monthly rent: US$4,708
Another major US city had the second-highest average rent, this time on the West Coast. New York’s average rent comes in at $4,708 and, like San Francisco, the Big Apple is a hugely important city and has even been referred to as the capital of the world.

Average monthly rent: US$3,352
The most expensive European city for private rental prices is London, with an average of $3,352. The UK’s capital is a huge city that draws millions of people with its strong presence in many fields such as the arts, commerce, entertainment, fashion, finance and more.

Average monthly rent: US$3,323
Completing the top five most expensive cities for rent is Los Angeles, with an average monthly price of $3,323. LA attracts many people looking to catch a break in the Hollywood film industry, as well as those just looking to enjoy the Californian sun, and has grown to be a huge and diverse city. 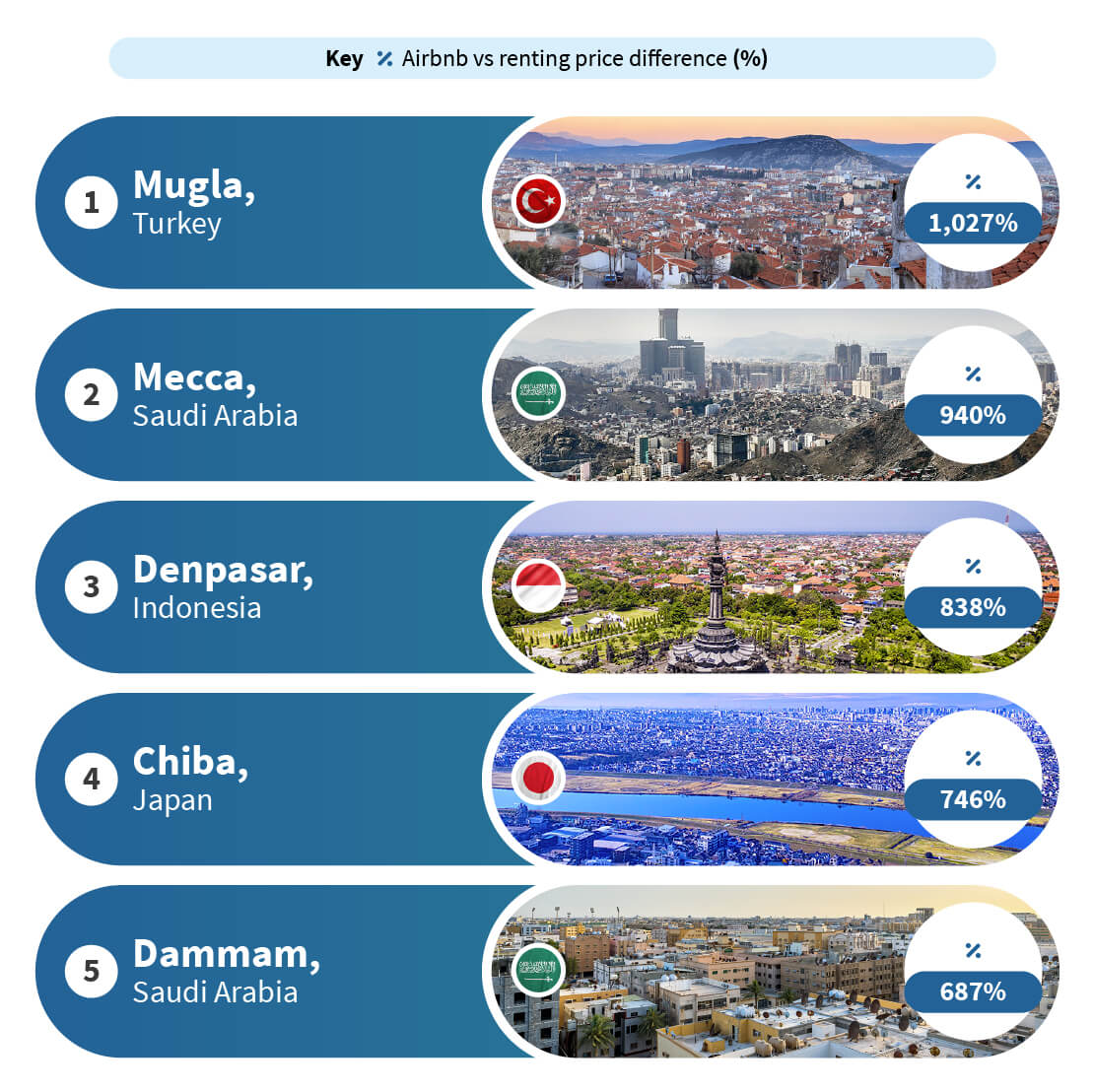 This Turkish city 30 kilometres from the Aegean coast is a popular tourist destination, due to its rich history, sunny weather and temperatures that can reach up to 35ºC (95ºF) in summer. Locals have taken full advantage of this, charging an average of more than $2,000 per month on Airbnb compared to the average local rent of $186.

One of the holiest sites in Islam, Mecca comes second on our list. It’s the destination for Hajj, the annual pilgrimage undertaken by most Muslims at least once in their lifetime. The average rent per month is $457 in Mecca, compared to average Airbnb prices of $4,751.

The capital city of the Bali province has experienced a boom in tourism in recent years with travellers flocking to the island city to enjoy its white sandy beaches, perfect for surfing or sunbathing. Airbnbs in this region are in high demand as it’s one of the most visited places in Asia, with an average monthly price of $3,479 compared to the average rent of $371.

As well as being one of the best cities to earn with Airbnb, Chiba is also high on the list of the biggest differences between rent and Airbnb earnings, charging an average of $6,434 on Airbnb compared to $576 in rent. Chiba is popular with tourists for its proximity to natural beauty spots such as Kujukuri Beach and Mount Nokogiri, and savvy homeowners have recognised the demand for this location.

Dammam is an important centre for the Saudi oil industry and so attracts many business travellers. However, those who visit the city should maybe consider renting accommodation privately, as Airbnbs in the city are subject to a markup of 687%.

Top cities with the smallest gap between rent and Airbnb prices 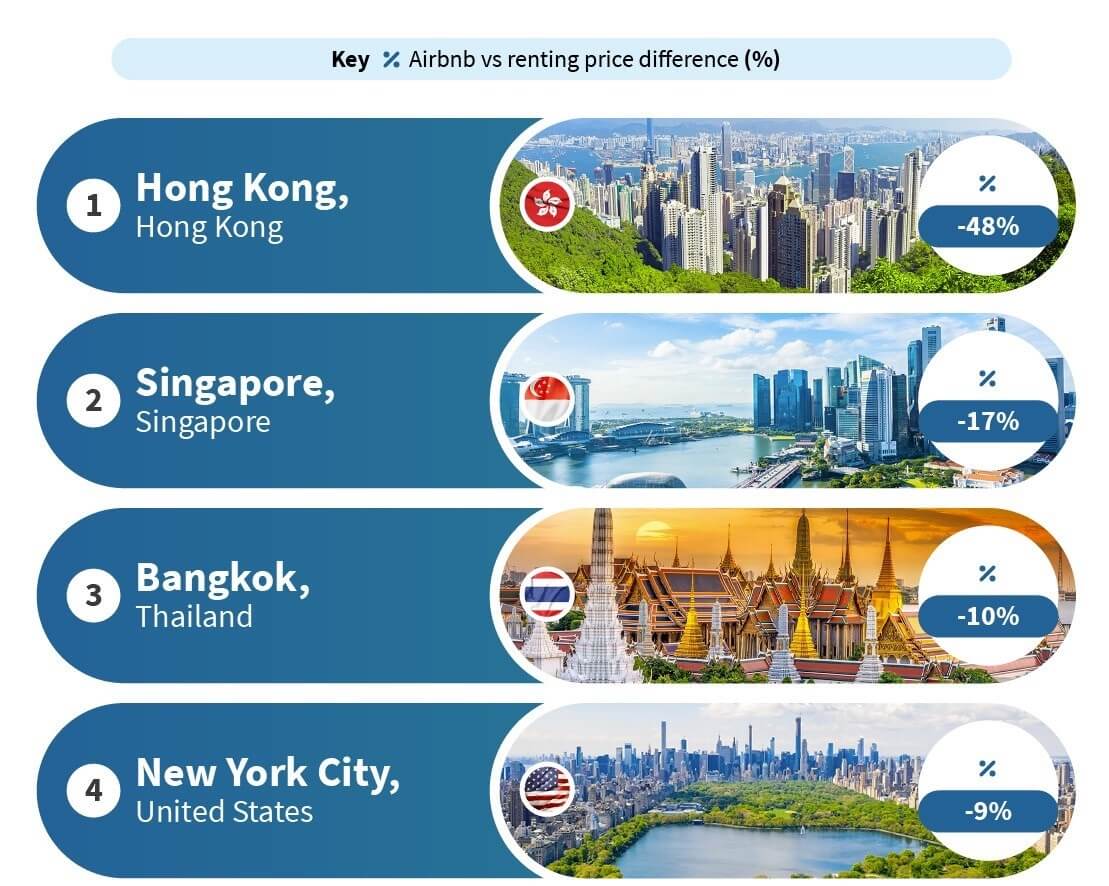 One of the few cities where the average Airbnb is cheaper than local rent prices is Hong Kong, which is known for its very high rent prices (averaging at just under $3,500). This high demand on rentals isn’t surprising, given that Hong Kong is one of the most densely populated places in the world. The difference between the average Airbnb price and private rent costs is 48%.

The island city-state of Singapore takes third place in our ranking, with a difference of $521 between average Airbnb prices and monthly rent. This city is popular with tourists for its eclectic mix of cultures, high level of public safety and culinary delights.

Thailand’s capital is another city where Airbnb prices are cheaper than renting privately, with a difference of 10%. Bangkok is a vast and vibrant city known for its contrasting nightlife scene and cultural landmarks, such as Buddhist temples like Wat Arun and Wat Pho.

This city attracts tourists from all over the world and is jam-packed full of cultural and culinary attractions, as well as parks and museums. Despite the opportunity to earn more than a little extra cash due to the high demand from tourists, locals actually charge 9% less on Airbnb per month than rent prices. 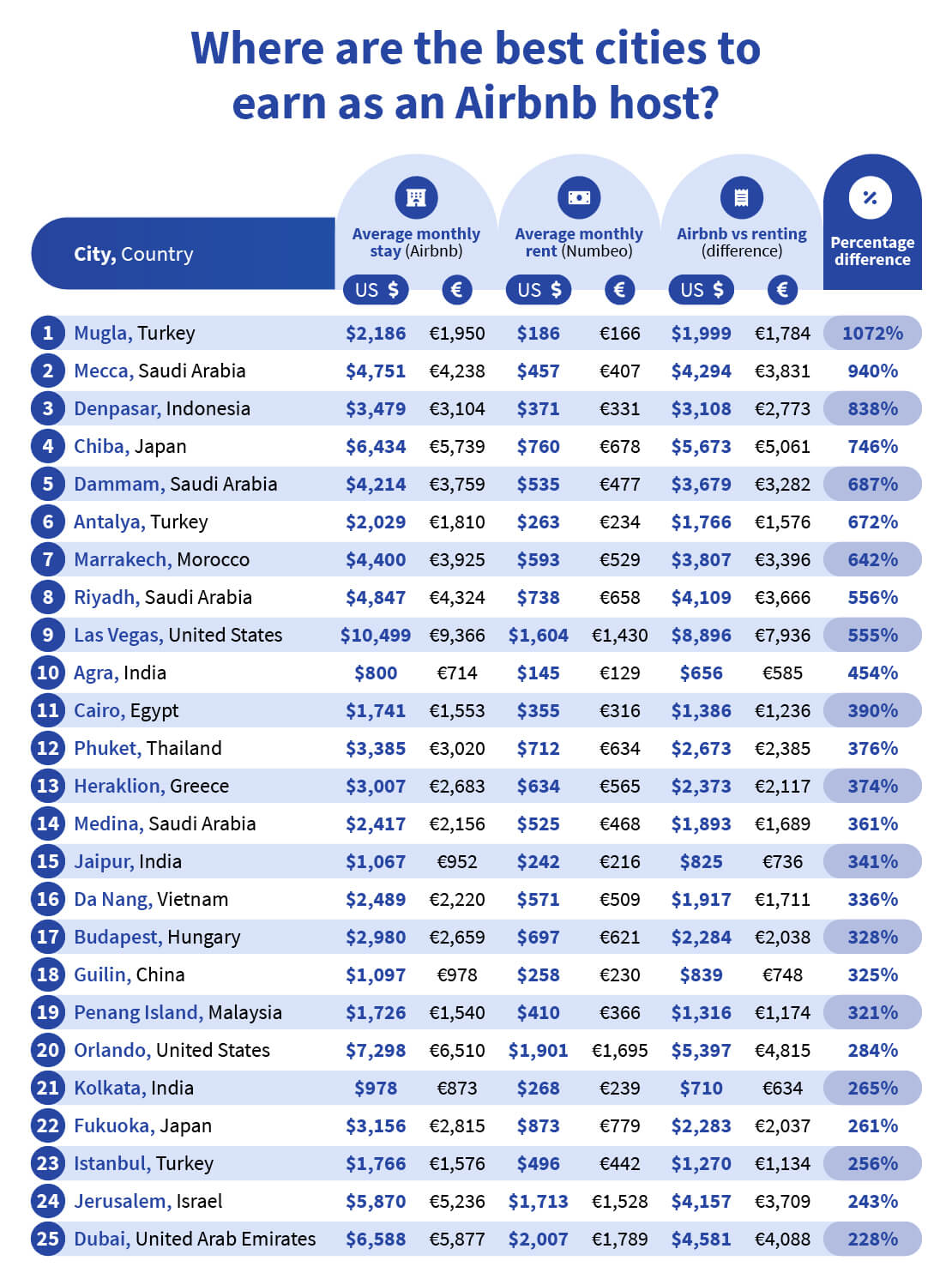 We looked at the 100-most visited cities in the world according to Euromonitor, finding the average rent price and average Airbnb price per month in each (for which data was available).

The estimated average monthly rent was calculated by taking an average of the rent for a one-bedroom and three-bedroom apartment in the city centre from Numbeo (as of 10th November).

The average monthly Airbnb price was taken from Airbnb (collected 11th-12th November), taking the average rent price in pounds for each month from January to December 2021 and then converting into US dollars and Euros (according to the exchange rates as of 12th November 2021 on XE.com) This was then used to create an average price for Airbnb properties for each city. The data for February 2021 was calculated by multiplying the average nightly price by 28 as monthly average prices were unavailable.