Whether it’s student debt, credit cards or a mortgage, most of us are guilty of spending more than we’re earning in some way, shape or form. In fact, many of us are too busy worrying about repaying our debts to realise why we have our heads underwater in the first place.

What you may not realise is that your household debt could be determined by more than simply your income and expenditure. Where you live, and how much it costs to live there, can also play some role in dictating your spending.

To help you better understand where your country ranks in terms of household debt, we’ve presented data from the Organisation for Economic Co-operation and Development (OECD), revealing the countries with the highest and lowest household debt, based on the latest available data.

Click through the tabs below to see the top and bottom three countries with household debt! 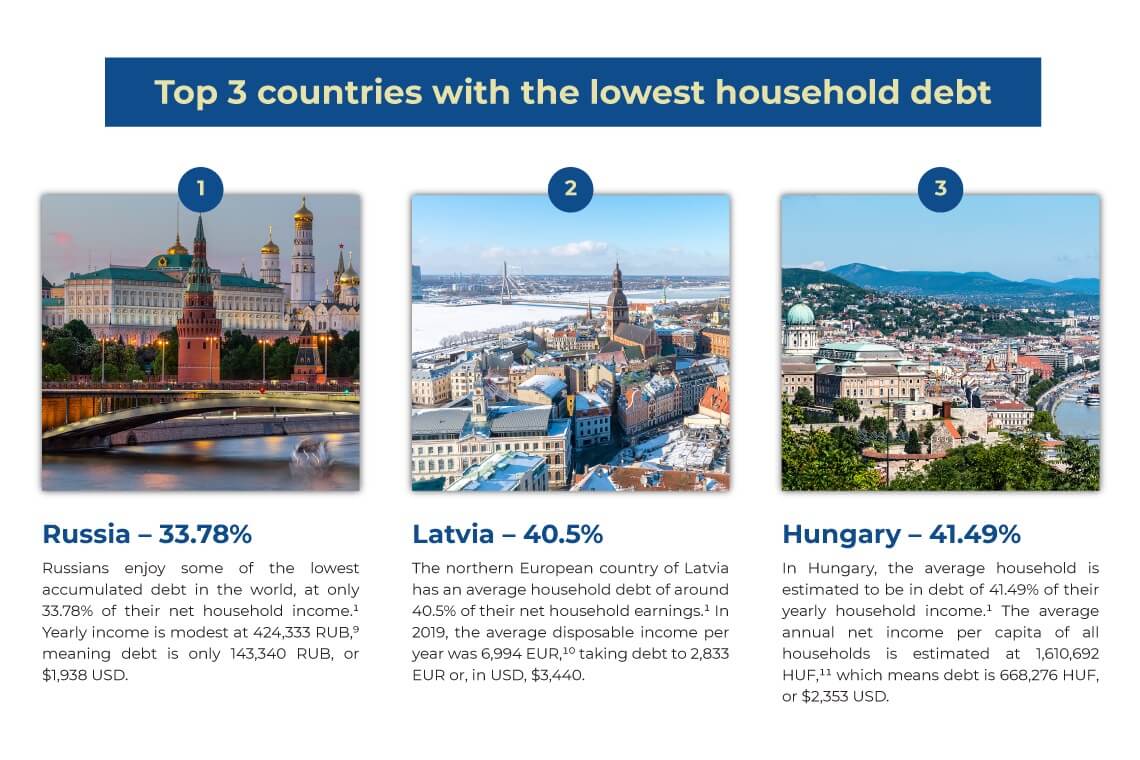 The table below reveals the portion of net disposable income each household has in debt and orders it from highest household debt to lowest. These figures are averages and may not be indicative of what your debt looks like. OECD defines disposable income as the income of households (eg. wages and salaries), after considering the payment of taxes and social contributions (if applicable).

If, for example, you’re a household in Australia with a combined net disposable income of $100,000, this data suggests your debt is around $210,070.¹ Seems high? Remember that this could include your mortgage, investor debt, loans and credit card debt.

Here’s how the rest of the world fares: 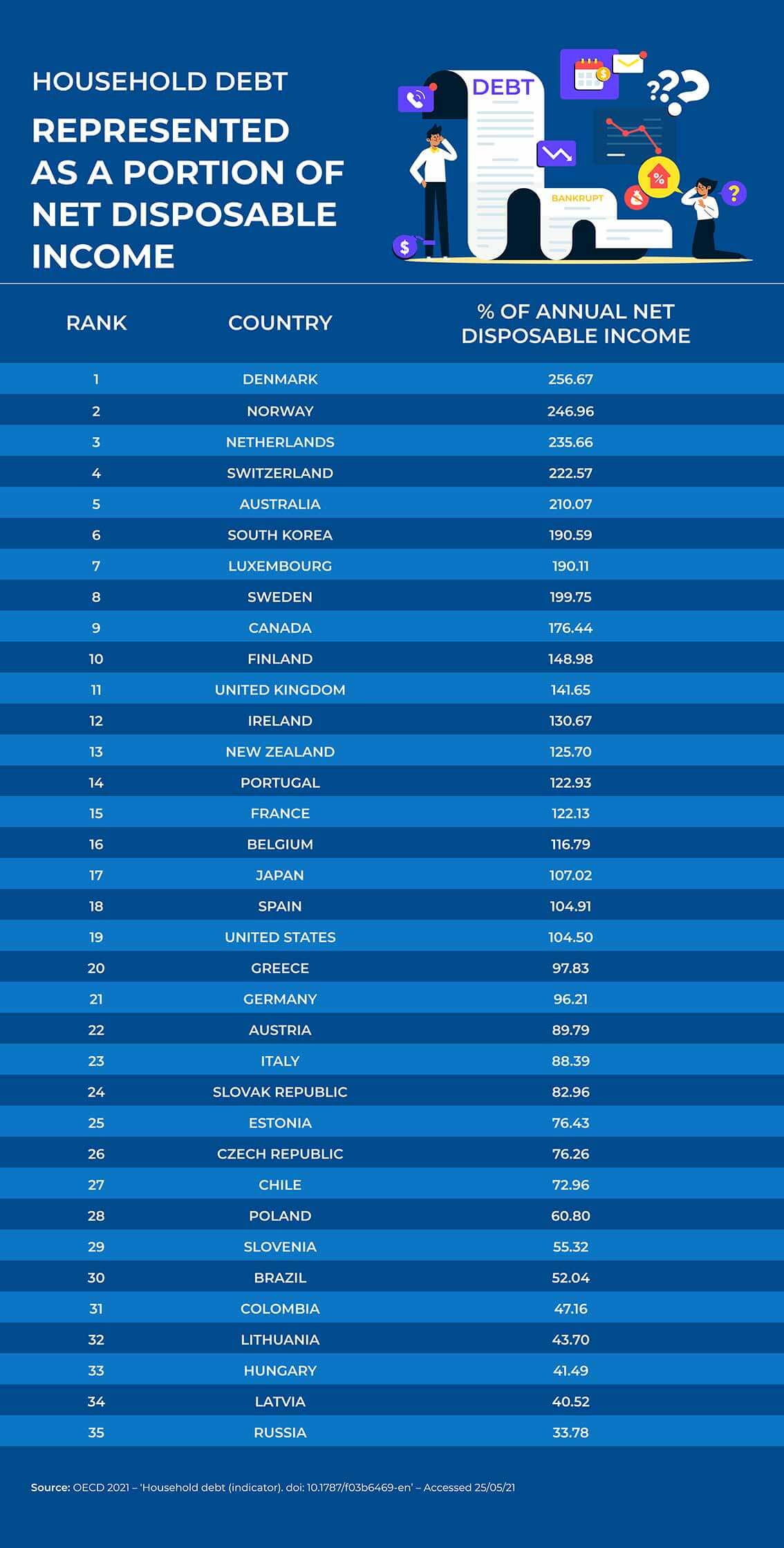 A closer look at the data

Most households spend significantly more than they earn

Of the 35 countries analysed, 19 had debt totalling more than net disposable income.¹ What’s interesting to note is that these countries are all considered to have advanced economies. Historically, rising household debt in advanced economies has been relative to rising household income, but in recent years, property prices have outpaced incomes.² And given that mortgages are likely to make up a high portion of a household’s liabilities, there’s sense to be made of these debts.

In news that’s unlikely to shock, at the top of the household debt list are expensive countries to both live in and visit. Given that Denmark is ranked the country with the highest household debt,¹ it comes as no surprise that Denmark’s capital, Copenhagen, was listed as the 25th most expensive city to live in, in 2020.³ Switzerland’s capital, Zurich, ranks as the fourth-most expensive city to live in against 209 others,³ and it’s also fourth-ranking for highest household debt.¹ Cost of living takes into account factors such as rent/mortgage, other housing costs, transport, groceries and more.

Eastern Europe has some of the world’s lowest household debt

As revealed by the OECD, countries within eastern Europe were revealed to have the least amount of household debt.¹ A possible explanation for this could be that mortgages are relatively uncommon in this part of the world. In Russia, Latvia, Hungary and Lithuania, 81.6% to 89.9% of the population owned their home outright in 2018, compared to 60.5% to 81.3% in Denmark, Norway and the Netherlands.⁴

According to OECD data, the average Australian household has debt of around 210.07% of their net yearly income.¹ In layman’s terms, Australians are spending a lot more than we’re earning. But why is that?

Well, when breaking down debt, it’s important to understand where it comes from. In 2015-16, The ABS found home loans made up 56% of total household debt, and other property loans 33%.¹³ They also found credit card debt to be the most common in Australia, held by 55% of households.¹³ And while it’s not easy to pin down the source of all of Australia’s debt, our property market and spending habits likely have something to do with it.

In fact, in late 2020 we saw a 1% ($24.2b) rise in household debt, driven mostly by housing loans and short-term debt, such as credit cards.14 This could be attributed to the surplus of housing and falling rents in Sydney and Melbourne, and the easing of lockdown measures which encouraged households to spend.

All currency conversions completed on 25 May 2021.

8Statista – ‘Average annual disposable income of households in the Netherlands 2017, by background’ – Accessed 15/05/21