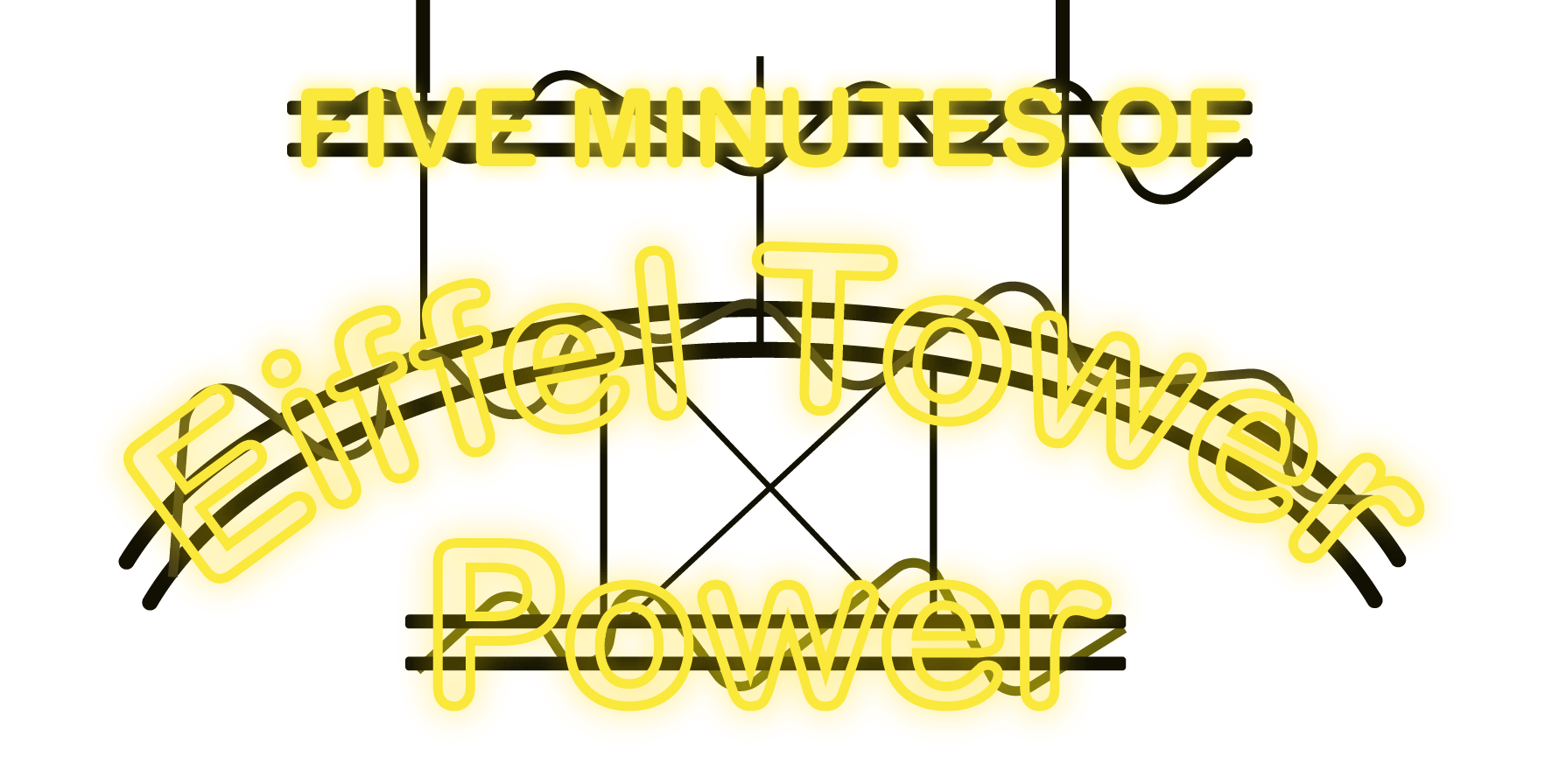 Although it has its imitators in places like Las Vegas and Tokyo, there’s nothing truly like the iconic Eiffel Tower in Paris, France.

At night, the diamond-sparkling lights of Eiffel Tower illuminate for five minutes, on the hour, between sunset and 2am (or 1am in winter).1 So, the question we’re going to ask: how much electricity do these lights require for five minutes, and what else could be powered from that same amount of energy?

From rock concerts, smartphones, electric scooters and more, here are 10 things that could be powered with the electricity that lights the Eiffel Tower.

Please note: The numbers are based on calculations made from specific products and instances. The electricity required may vary depending on your product’s needs.

How much energy do the sparkling lights require?

Fully recharge 555 iPhones in an hour

We use our phones for everything these days – social media, text messaging, holiday snaps and much more – but how often do we think about the power it takes to charge them?

Well, using the iPhone SE as an example, it can take half an hour to charge your phone from zero to 50%, using an 18-watt adaptor.3 Taking this into consideration, 555 iPhones could be fully charged every hour for the amount of power consumed by the glittering Eiffel Tower lights every five minutes.

Who knows; while an illuminated Eiffel Tower is an incredible sight, perhaps the iconic monument may attract even more visitors if it were a dedicated phone charging station!

Since Apple’s specifications state that the iPhone SE can go from zero to 50% in half an hour with an 18W charger,3 then it’s presumed that it’d take an hour to fully charge the same phone. The wattage from the Eiffel Tower lights is then divided by 18 to get the number of phones that could be charged within an hour.

Think the Eiffel Tower lights are impressive? Imagine the city of Paris donning a red glow from a gigantic neon sign.

Provided it consumes four watts per foot,4 you could power a 2,500-foot-high (762m) red neon sign for an hour with the power the Eiffel Tower lights. That’s twice the size of the tower itself, which stands at a mere 1,063 feet (324m).

The question is: where would you put such a large sign in Paris?

To get the overall footage of the red neon sign, we divided the 10,000W consumed by the Eiffel Tower lights by 4W.

Back in 1972, Deep Purple’s show at London’s Rainbow Theatre made history and was listed in the Guinness Book of World Records as the loudest concert of all time.

With a PA system that boasted 10,000W (10kW) of power, the legendary rock group known for ‘Smoke on the Water’ reached a loudness of 117 decibels.5 The concert was so loud that three unfortunate patrons fell unconscious as a result of the sheer power of Deep Purple’s performance.

While this loudness mark has been surpassed, 10kW is still enough to power the PA for one epic rock show for an hour.

The 10,000W it takes to power the PA system is equivalent to 10 kW, which is the amount the Eiffel Tower lights use every five minutes they’re powered.

Love a great cup of coffee in the morning? How about a cup every day for the next 39 years? Well, that’s entirely possible with the power consumed by the Eiffel Tower’s lights.

The Natural Resources Defense Council (NRDC) stated that the 164 watts of idle power consumed in northern Californian homes each day in 2015 were enough to make 234 cups of coffee. With this same formula applied over 10 kW, you could make over 14,000 cups of coffee.6

Of course, avid coffee drinkers would tell you that one a day simply isn’t enough. How about three cups of coffee a day for 13 years?

Run a heart-lung machine for an open-heart surgery

The amount of power used by the Eiffel Tower lights could be enough to assist in a life-changing medical procedure.

Heart-lung machines are vital for patients undergoing open-heart surgery, as it takes over the functions of the heart and lungs, allowing surgeons to work on a still heart.7 These machines also require a lot of power, with some needing around 3,000W (3kW) of electricity.8

While three hours might not sound like much, it might be enough to complete an open-heart surgery, with the medical procedure taking between three and six hours on average.9

For this equation, we simply divided the 10,000W generated by the Eiffel Tower by 3,000W to get the number of hours the heart lung machine could run for.

Power an electric scooter for over 900kms

If you’re someone who enjoys getting around the city by way of electric scooter, you might be surprised to find out how far 10kW could get you.

With an electric scooter that consumes 1.1kW per 100km,10 you could travel over 900kms from the amount generated from the Eiffel Tower lights. That’s enough for a trip from Paris to Milan!

Alternatively, you could choose the more practical option of using the power to travel 25km a day for 36 days – it’s up to you.

The 10kW from the Eiffel Tower lights is divided by the amount an electric scooter uses per 100km (1.1kW), then multiplied by 100 to get the total kilometres.

Run 66 hair straighteners for an hour

Hair straightening is part of the routine of many people looking to tame their natural curls. The hair straightener itself also generates heat in a short amount of time, meaning it could use a lot of power if left on.

The wattage was retrieved from the GHD IV professional styler box.

How about those needing to groom the hair on their face? Well, if you’re a man looking to keep your beard neat or going for a full shave, the electricity that powers the Eiffel Tower lights is more than enough to maintain whatever look you’re going for.

Using the WAHL Optimus trimmer as our example here, it typically takes one hour to fully charge at around 48W.11 Once fully charged, it typically has up to three hours of battery life.12 This means that the energy consumed from five minutes of the Eiffel Tower lights being switched on can power either:

If you have that amount of energy dedicated to your beard trimmer, there would certainly be no excuses for your beard to get grizzly.

The beard trimmer has the following units of power listed on its charger:

To achieve the conversion into watts, the number of amps is multiplied by the volts.

The amount consumed by the Eiffel Tower lights (10,000 W) was divided by the wattage of the trimmer (48W), then multiplied by the number of hours the trimmer can hold a full charge (three hours).

Play ‘The Legend of Zelda: Breath of the Wild’ for over 470 hours

One of the most critically acclaimed games on Nintendo Switch, The Legend of Zelda: Breath of the Wild, contains an incredible open world you can sink hours into. But how much gameplay could you get through with an accumulated 10kW of power?

Well, the Nintendo Switch can hold a full charge for up to nine hours; but for Breath of the Wild, it may be limited to five and a half hours due to the additional processing power the game requires. Provided you can get a full charge from a regular Nintendo Switch AC charger, which uses around 39W, you could play this gaming masterpiece for over 470 hours.

So, whether you’re looking to explore every nook and cranny of Hyrule or want to playthrough the game seven times, the power the Eiffel Tower lights consume would be more than enough.

Finally, based on the assumption that Legend of Zelda: Breath of the Wild would take around 60 hours to play through, we divided the total amount of hours by 60 to get the number of playthroughs.

Watch 86 hours of Netflix, Amazon Prime or Disney+ on a 4K smart TV

Love binging new television programmes from one of the numerous streaming platforms available? Whether you’re signed up to Netflix, Amazon Prime, Disney+ or any other video streaming service, you could get a lot of bang for your buck from 10 kW of electricity.

In fact, with a 4K smart TV which runs at 115 W,14 you could watch almost four days-worth of your favourite TV shows and movies. This is perfect if you have several TV series or movies you have to catch up on to be part of those water-cooler discussions in the office.

Just don’t watch all 86 hours at once!

For this example, we use the typical power consumption of a 65” Class Q90R QLED Smart 4K UHD TV, which is 115W.14 To get the number of hours someone could watch their preferred video streaming service, we divided 10,000W by 115W.

The Eiffel Tower lights up 20,000 light bulbs, with each using 6W of power.1 Multiplying these two numbers (20,000 x 6) allows us to calculate the overall watts consumed by the hour.

Can you keep your lights on for less?

You don’t need 20,000 lights in your house to justify trying to find a better deal on your energy plan. If your current plan costs more than you bargained for, it’s worth seeing why it pays to compare.

If you live in SE QLD, NSW, ACT, VIC and SA, try our free energy comparison service to compare plans from several providers in your area in just minutes.

Brought to you by Compare the Market: Making it easier for Australians to search for great deals on Energy plans.