Which countries produce the most renewable energy?

Countries are increasingly relying more on renewable sources, such as wind and solar, for their energy as they attempt to go green.

But which nations are investing in these eco-friendly alternatives the most? And which need to do more?

The countries producing the greenest energy per person 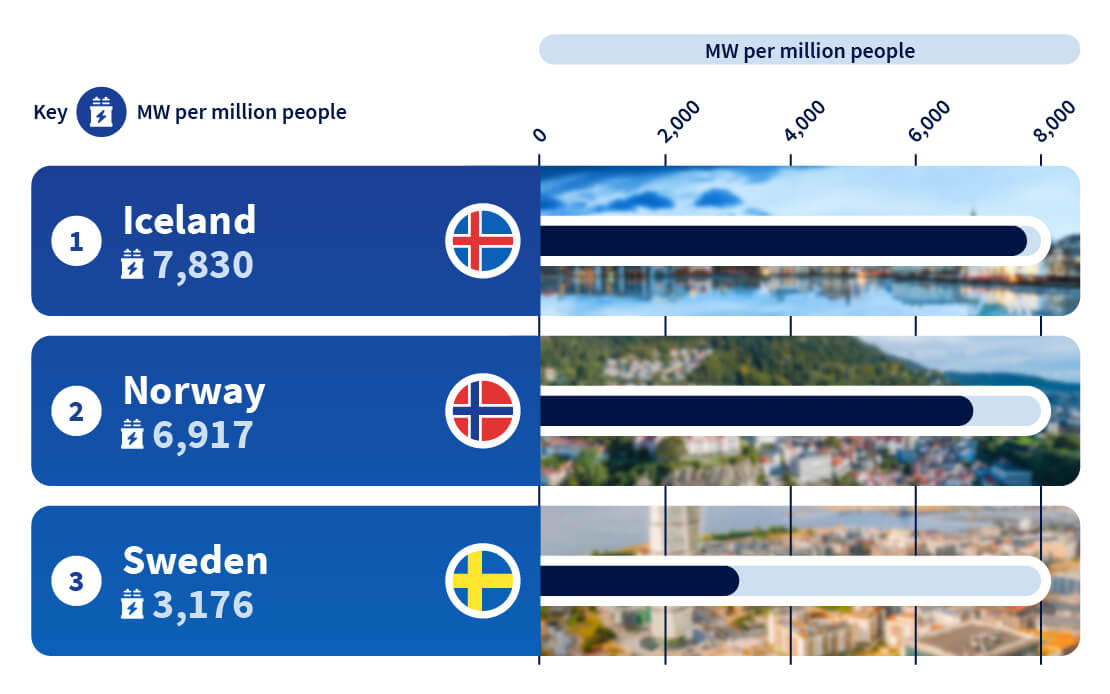 2. Norway – 6,917 MW per million people
Another Nordic country comes in second place, with Norway producing 6,917 MW of renewable energy per million people.
Again, this was primarily sourced from hydropower (which has been the main fuel source for Norwegian industry since the late 1800s) by harnessing the country’s many rivers and waterfalls.

3. Sweden – 3,176 MW per million people
In third place (although by some distance) is neighbouring Sweden, with 3,176 MW of renewable energy capacity per million people.
While still dominated by hydropower, Sweden’s renewable energy profile is a bit more diverse than those of Iceland and Sweden, with high levels of bioenergy also often used for heating. 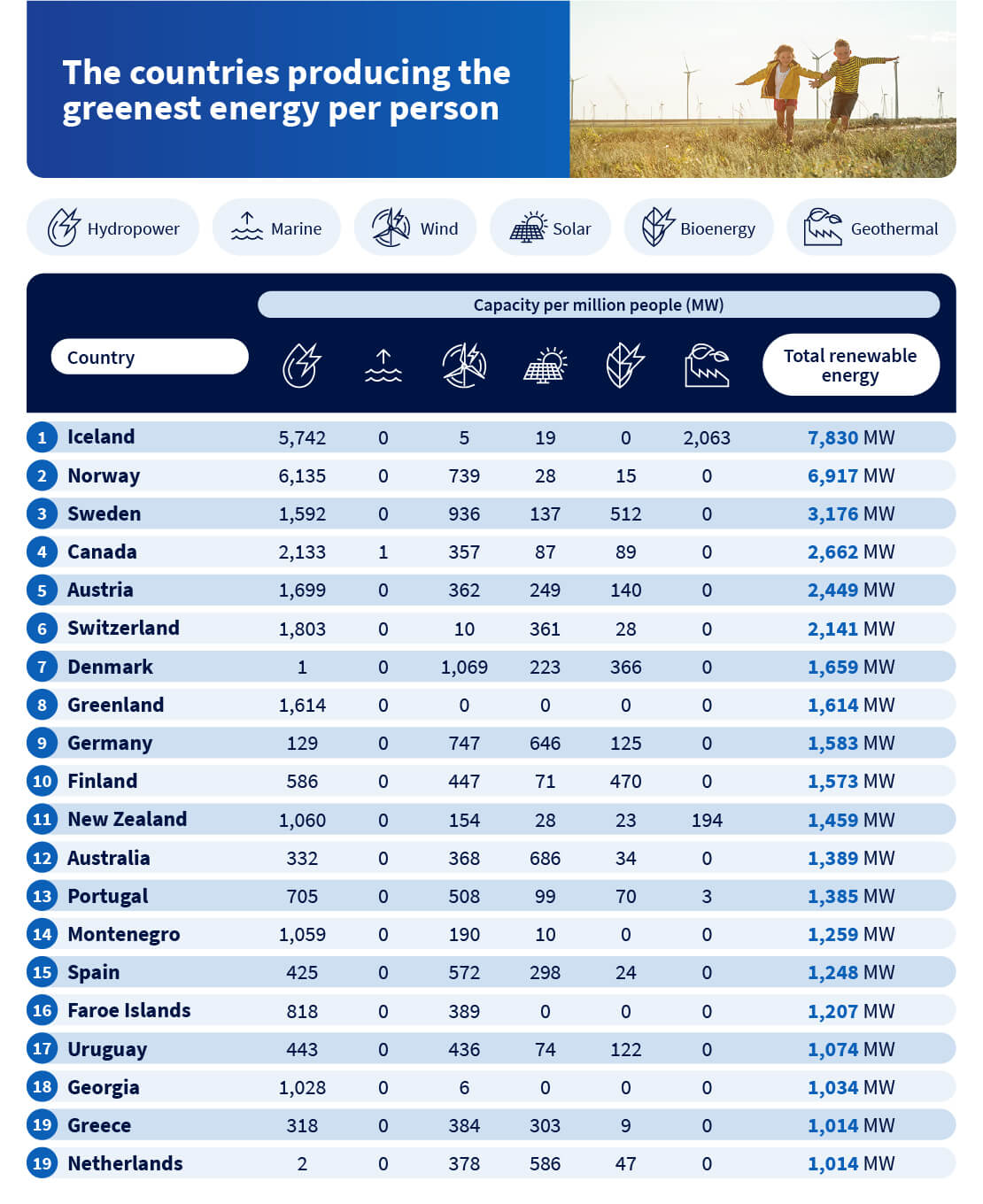 The countries relying on green energy the most 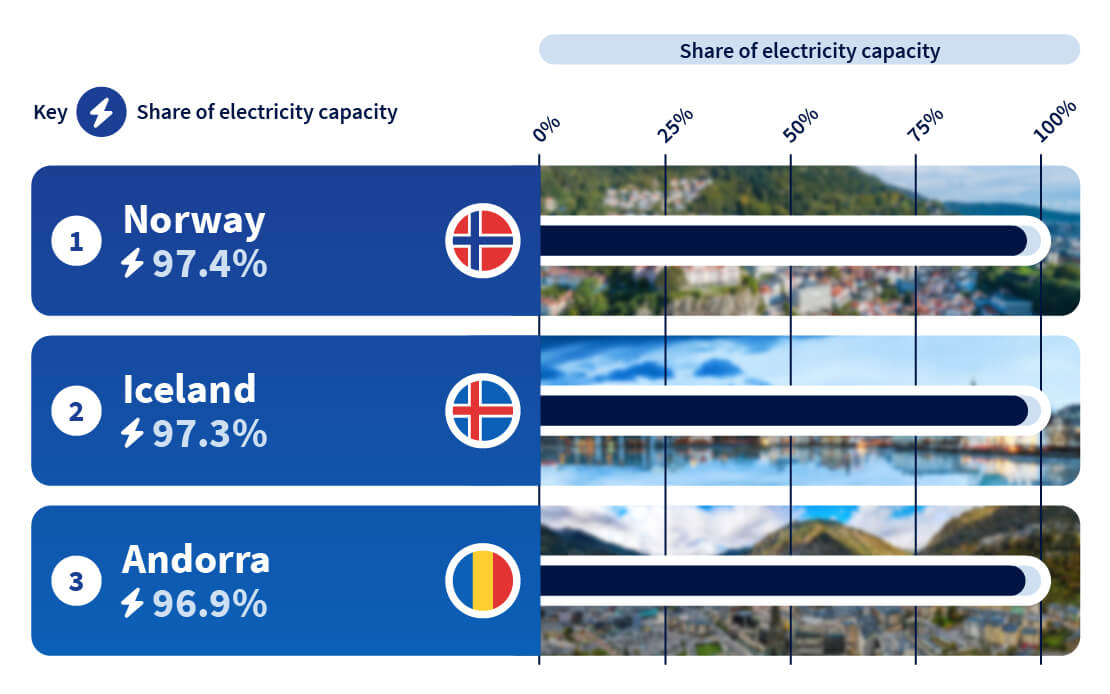 1. Norway – 97.4% share of electricity capacity
Looking specifically at the countries where renewable energy makes up the greatest share of total electricity capacity, Norway comes out on top with 97.4%.
The country produced 33,003 MW of hydroelectric power in 2020, but also makes use of wind, solar, and bioenergy too.

2. Iceland – 97.3% share of electricity capacity
Only just behind Norway in terms of its renewable energy share is Iceland, with 97.3% of capacity coming from renewables. And it’s not surprising given the nation aims to be carbon neutral by 2040.
Iceland produces much of its renewable energy itself, with the majority of hydropower coming from plants owned by Landsvirkjun (the National Power Company).

3. Andorra – 96.9% share of electricity capacity
The tiny principality of Andorra has a renewable energy share of 96.9%, having actually fallen from 100% since 2015.
The majority of energy here is imported from Andorra’s neighbours (including France and Spain) and it makes use of hydropower, bioenergy, and solar power. 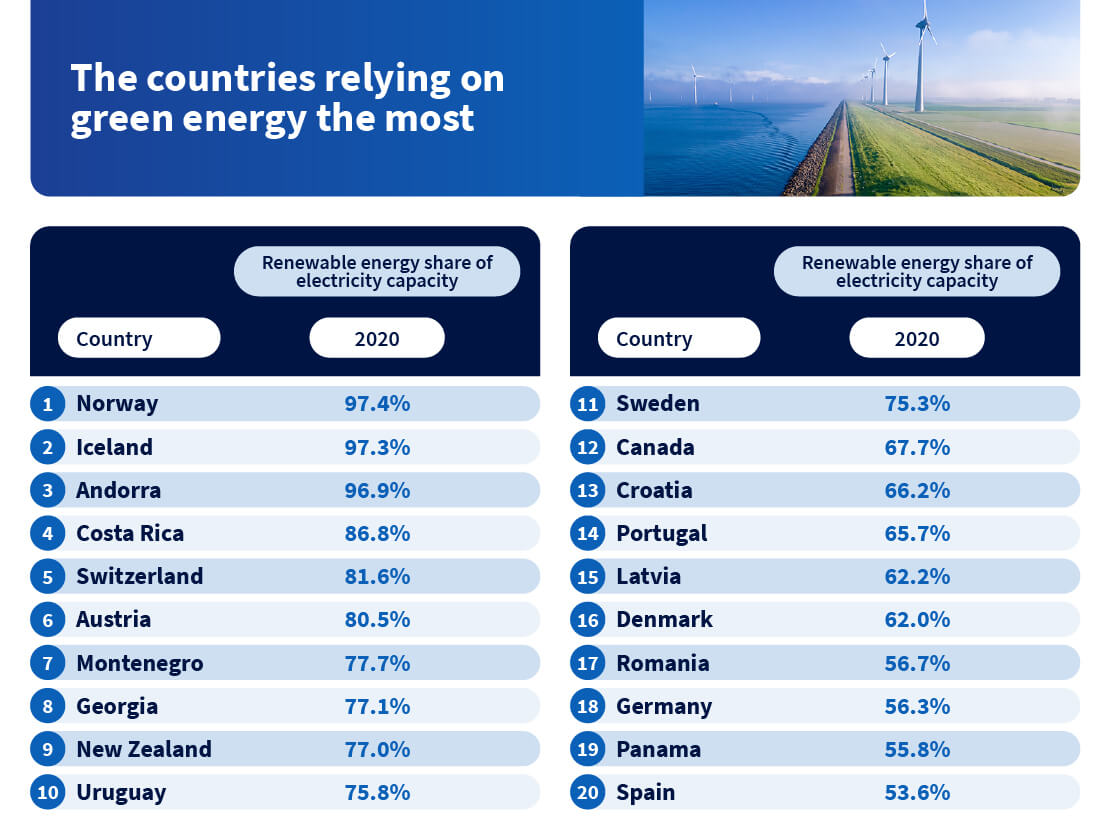 The countries with the largest increase in renewable capacity since 2011 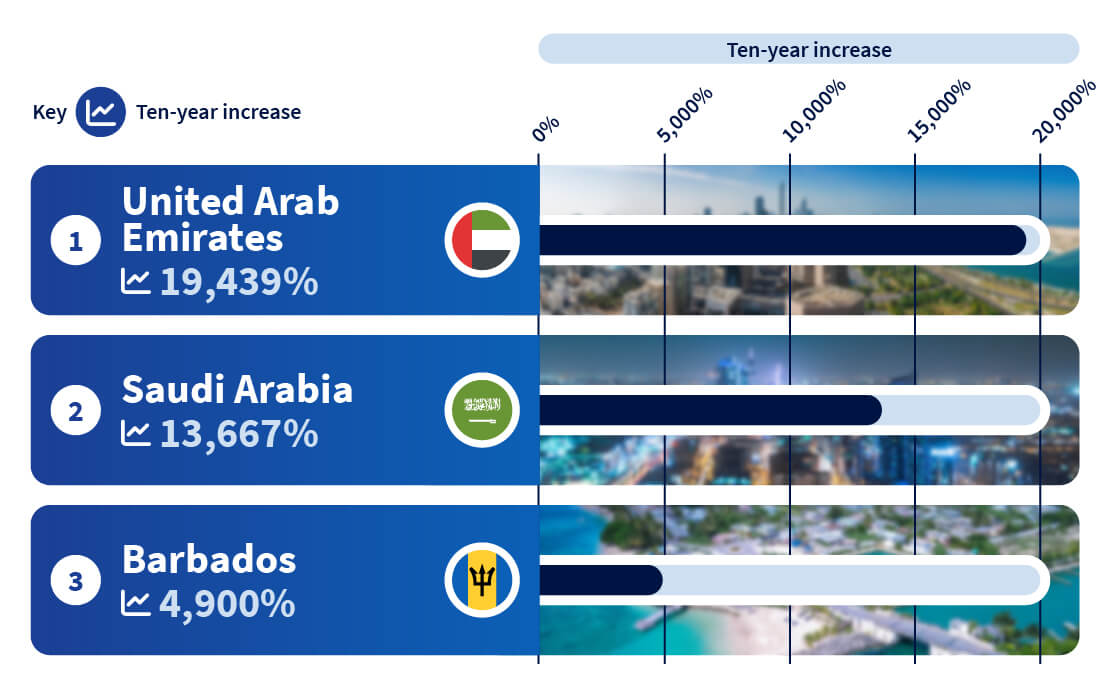 1. United Arab Emirates – 19,438.5% ten-year increase
The nation that has seen its use of renewable energy increase the most is the United Arab Emirates, where renewable capacity has grown by almost 20,000% over the last decade.
The UAE has traditionally relied on its plentiful supplies of oil but has recently made a big effort to shift away from fossil fuels, although just 7.2% of the country’s energy needs are met by renewable means.

2. Saudi Arabia – 13,667% ten-year increase
Like the UAE, Saudi Arabia is another country that has had a strong reliance on oil for its energy needs but has been pushing towards more renewable alternatives with an increase of over 13,000% in the last ten years.
The kingdom has particularly invested in solar power, producing 409 MW in 2020 compared to just 3 MW in 2011.

3. Barbados – 4,900% ten-year increase
The Caribbean country of Barbados comes in third place, having increased its renewable energy capacity by 4,900%.
Past natural disasters and the impact of the COVID-19 pandemic have highlighted the need for a more diverse economy in Barbados and renewable energy has been placed at the forefront of this.
As we can see, each of the nations that have increased their renewable capacity the most are those that have developed renewable sources comparatively late to the rest of the world. 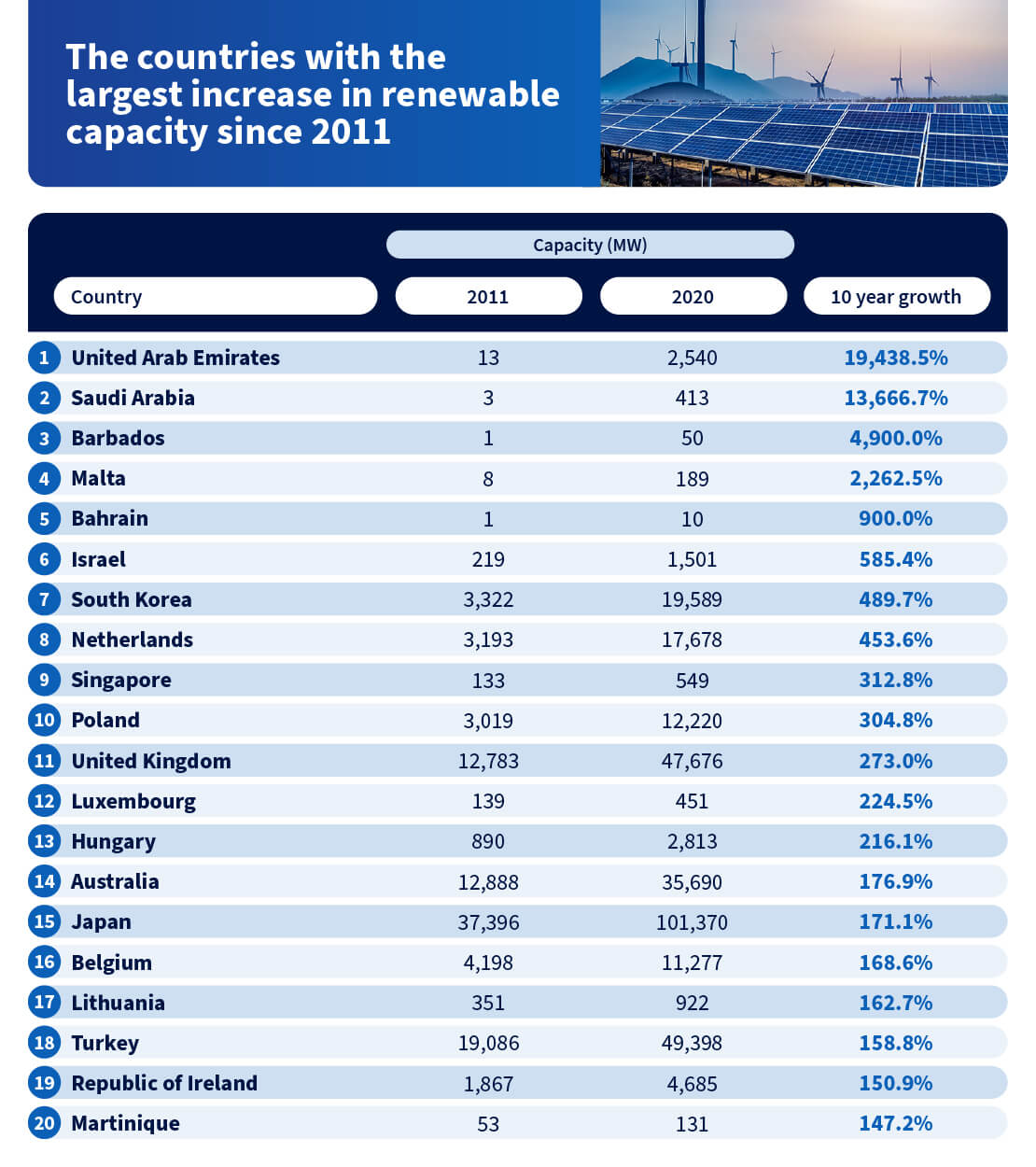 The country producing the most hydropower 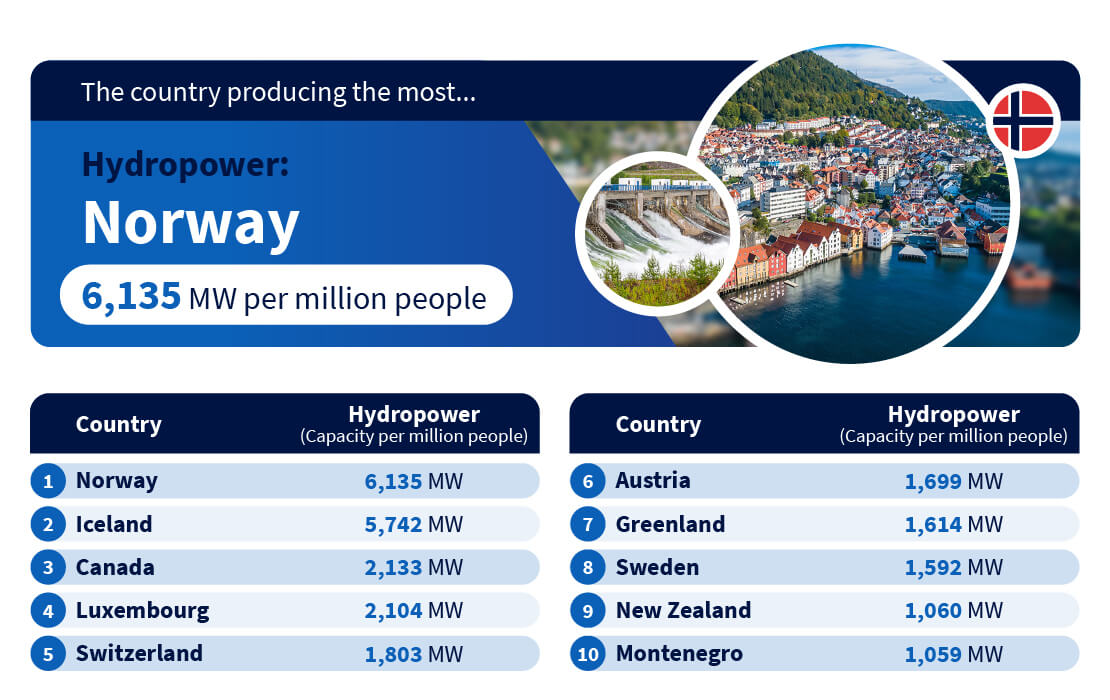 Norway – 6,135 MW per million people
As one of the countries with the greatest renewable capacity overall, it’s not surprising that Norway also has the highest hydropower capacity per capita.
Hydro has been a mainstay of Norwegian energy for many years due to the abundance of access to water via its reservoirs; the country is home to around half of Europe’s total reservoir storage capacity.

The country producing the most marine power 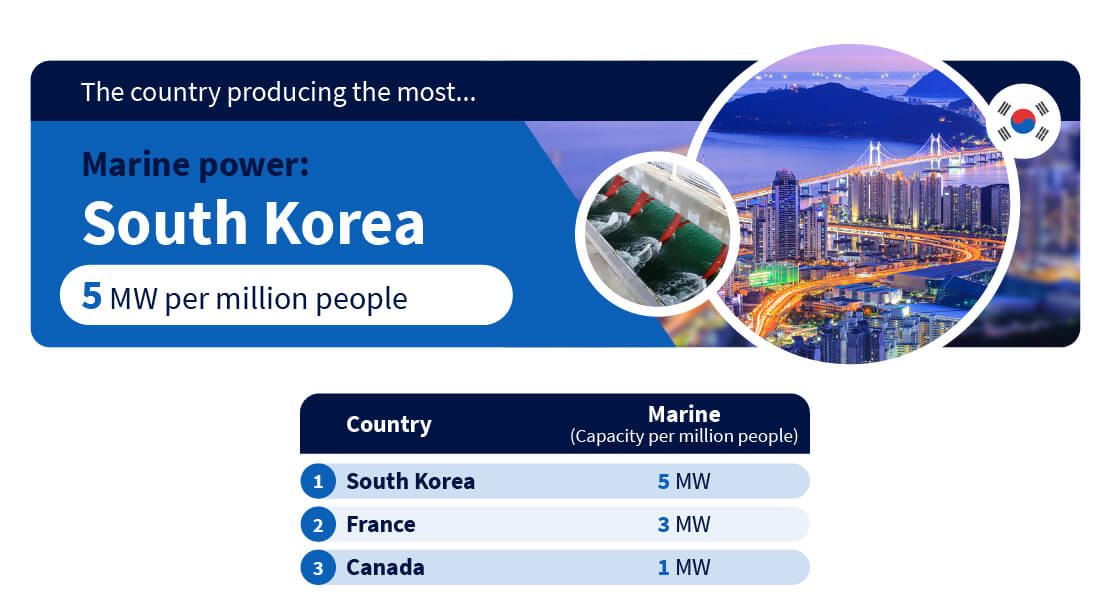 The country producing the most wind power 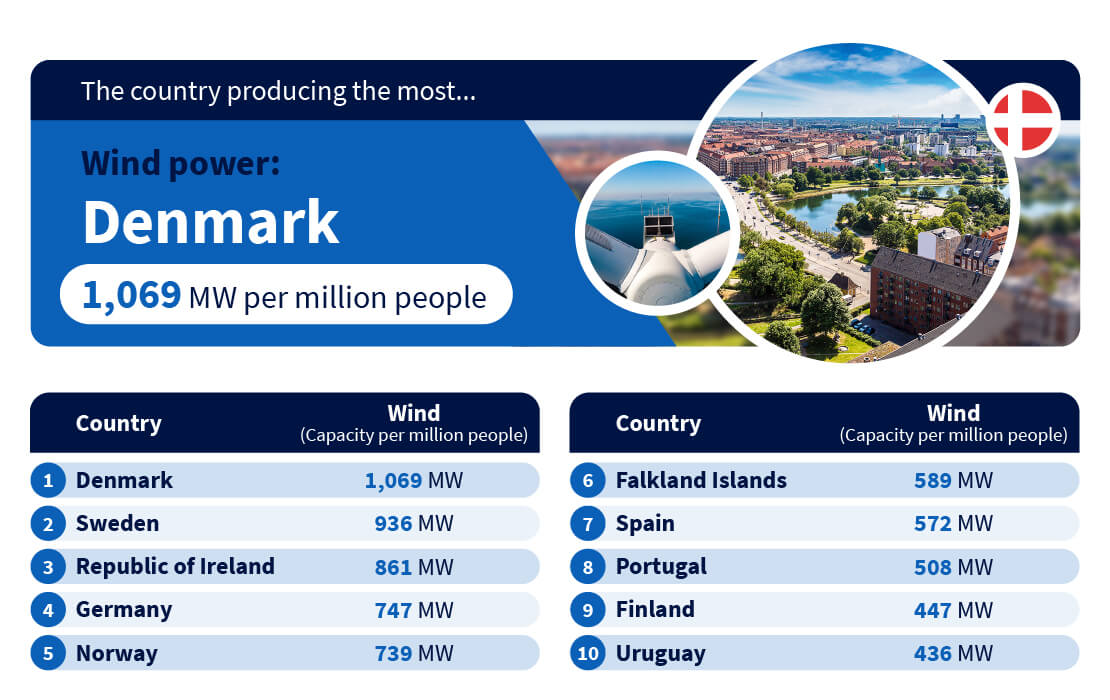 The country producing the most solar power 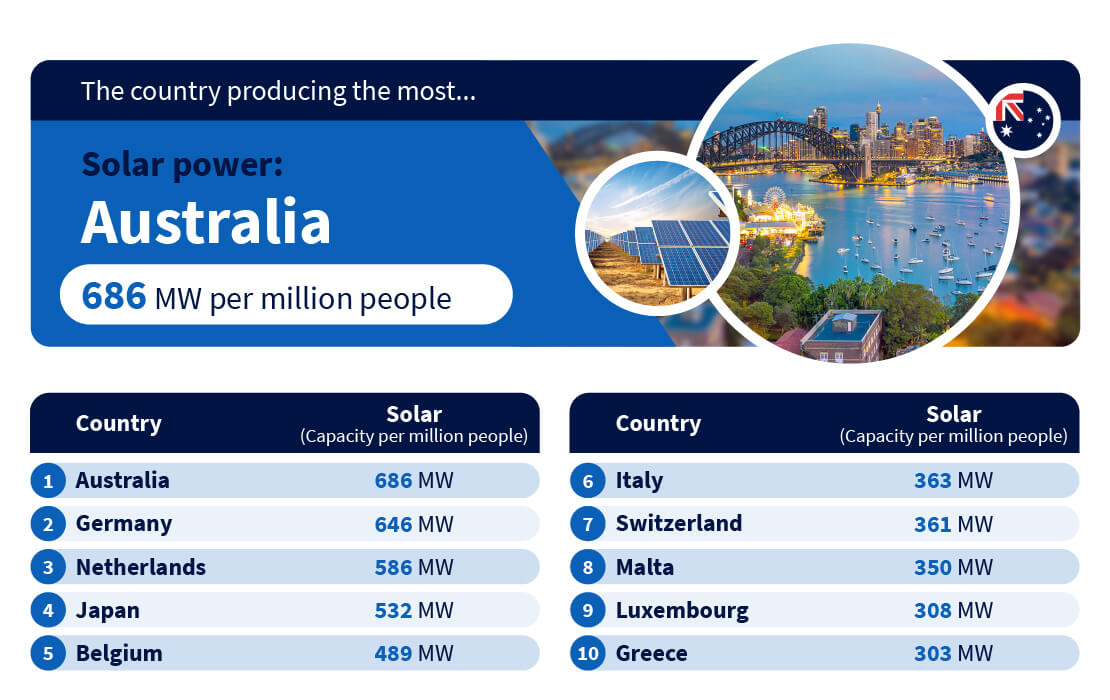 Australia – 686 MW per million people
The use of solar power is growing rapidly in Australia, with over 30% of Australian households now estimated to have a rooftop solar PV system installed.
Australia is, of course, a country that benefits from a lot of sunshine and so there are also many large-scale solar farms now in place across the country.

The country producing the most bioenergy 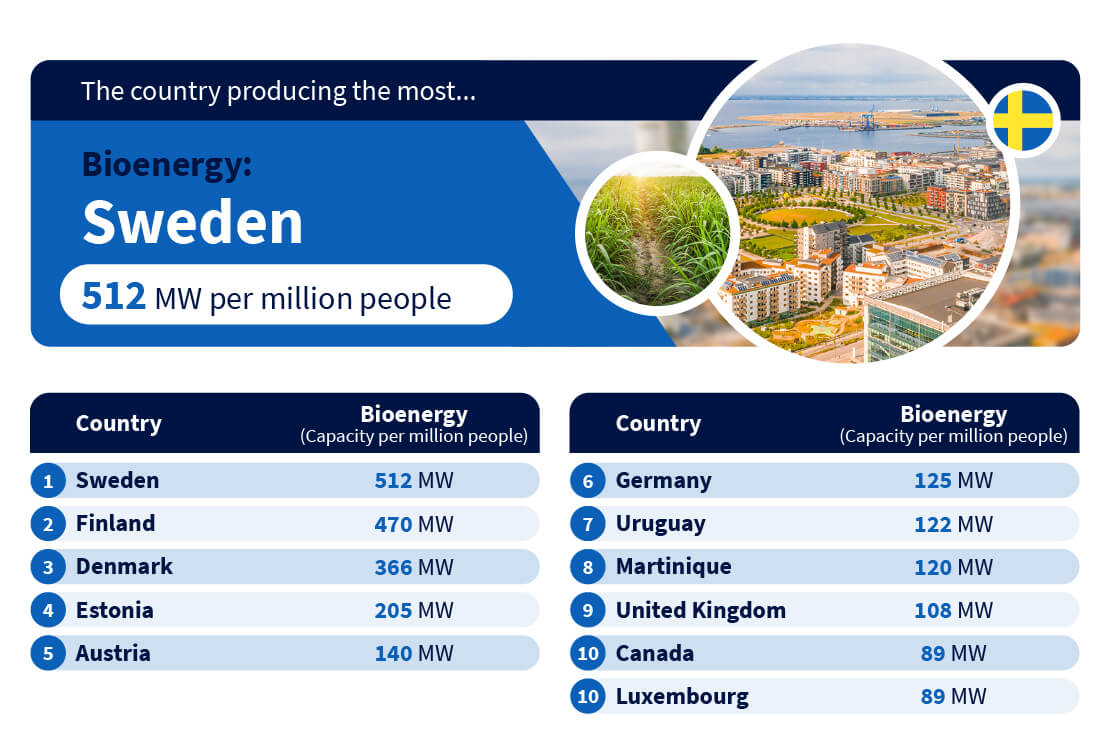 Sweden – 512 MW per million people
Bioenergy is derived from recently living organic materials, such as crop and food waste. Sweden is now one of the world leaders in this field, having relied on oil up until the late 1970s.
Today, the country has a bioenergy capacity of 512 MW per million people. It’s particularly used in district heating and forest-based industries, which use up a lot of energy.

The country producing the most geothermal energy 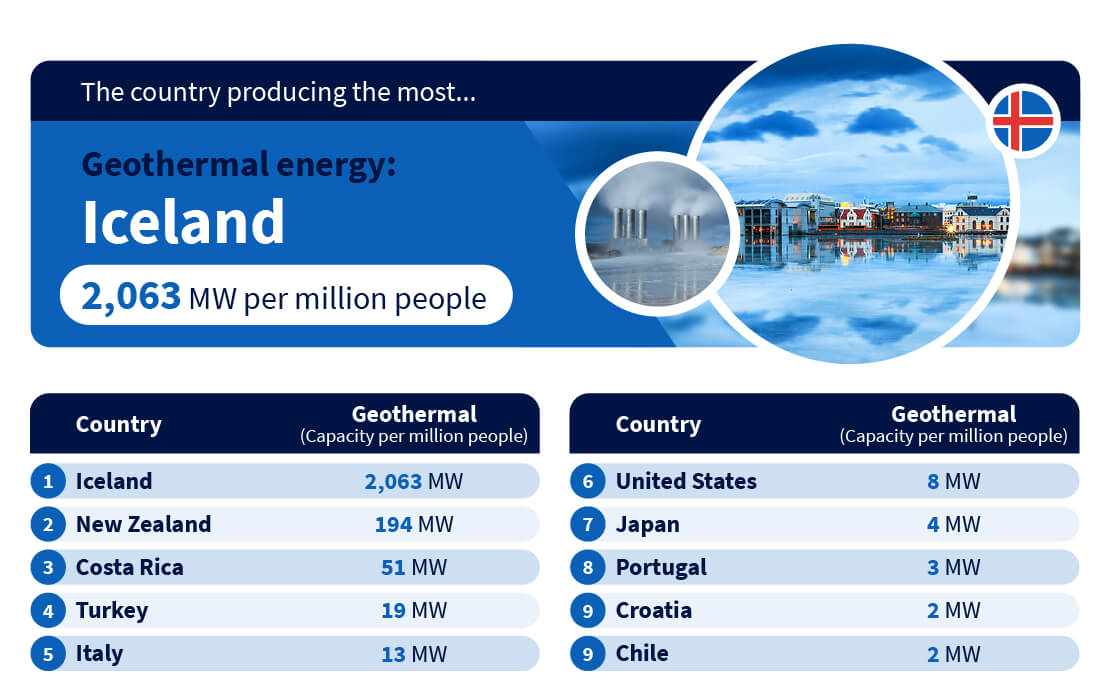 Iceland – 2,063 MW per million people
The country with by far the highest geothermal energy capacity is Iceland, with a capacity over ten times larger than any other country.
Iceland has been a pioneer in the use of geothermal energy, and its move away from using peat and imported coal has led to Iceland becoming one of the most prosperous countries in Europe.
The country’s capacity for geothermal energy is so high due to its position between the Eurasian and North American tectonic plates, which means it has a high number of volcanoes, much like New Zealand.

All energy data was sourced from IRENA’s Renewable Energy Capacity Statistics 2021 and is shown in megawatts.

Figures per million people were calculated using 2020 population data from the World Bank.

Note that we only looked at developed countries and territories, defined as countries with a score of over 0.800 on the United Nations’ Human Development Index.

Brought to you by Compare the Market: Making it easier for Australians to search for great deals on Energy plans.