The Best International Cities for Stargazing

With the amount of artificial lighting steadily increasing across the world each year, it’s making it harder to find spots to go stargazing. Whether you want to zoom in on the Andromeda constellation with your high-powered telescope or simply wish upon a shooting star, we’ve got you covered with our list of 50 international cities that are great for stargazing.

Denver, Colorado is our top city for stargazing

Coming in first place for stargazing is Denver, Colorado. Whilst the elevation of the city definitely helps (it’s the highest of all cities on our list), it also boasts low levels of rain and relatively low levels of light pollution. If you’re in the city and want to spend an evening gazing up at the stars, head to Red Rocks Amphitheatre (when there aren’t any concerts on, of course!) or Chamberlin Observatory.

In fact, cities in the United States dominate the top ten, with El Paso, Texas in second position. Stargazing here is a popular pastime for locals and tourists alike; the Hueco Tanks State Park holds regular guided tours at night.

Positions three and four are two Canadian cities: Calgary (the Rothney Astrophysical Observatory is a great hotspot) and Edmonton, where you might even be able to see the Northern Lights if you’re really lucky!

Rounding up the top five is the first European city to make the list: Madrid, Spain, which has extremely low levels of light pollution at 89.51.

The USA continues to dominate the top ten, with Las Vegas in sixth place; this might sound surprising given all of the hotels and casinos contributing to its high levels of light pollution. However, all you need to do is drive out of the city for 25 minutes until you reach the desert, and you’ll feel like you’re in another part of the world entirely. Wrap up warm and you can spend a romantic evening searching for meteor showers, Mars, Jupiter, and more, depending on the visibility.

Phoenix, Arizona and Fort Worth, Texas also make it into the top 10, with Australia’s capital, Canberra, entering at position 8 thanks to its low levels of light pollution (61.55). 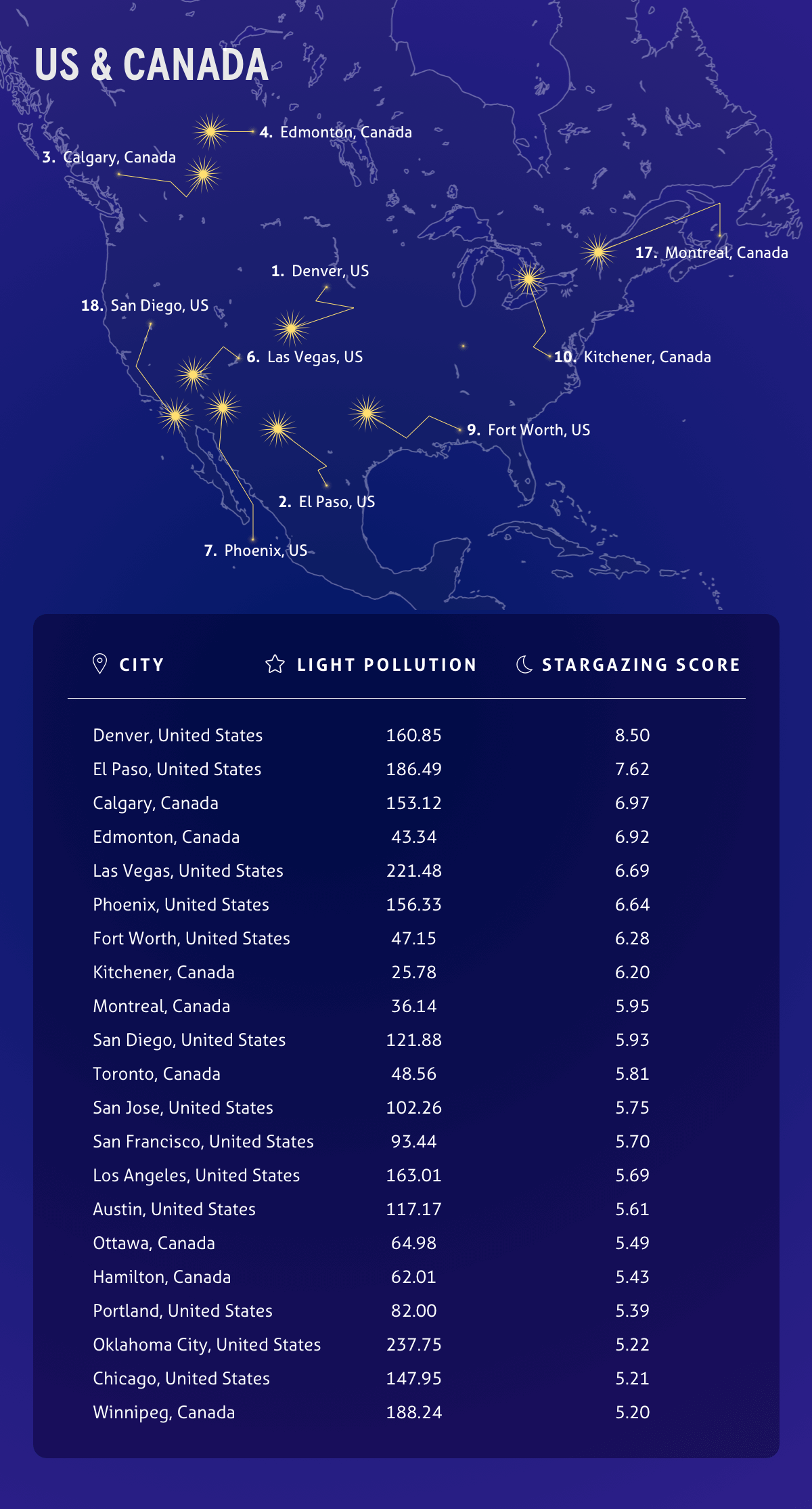 Top cities for stargazing in Europe and the UK

Madrid aside, the next city in Europe to feature on our list of stargazing capitals is Barcelona, in position 11. Sofia in Bulgaria follows closely behind, alongside Germany’s second city, Munich, and Valencia in Spain. 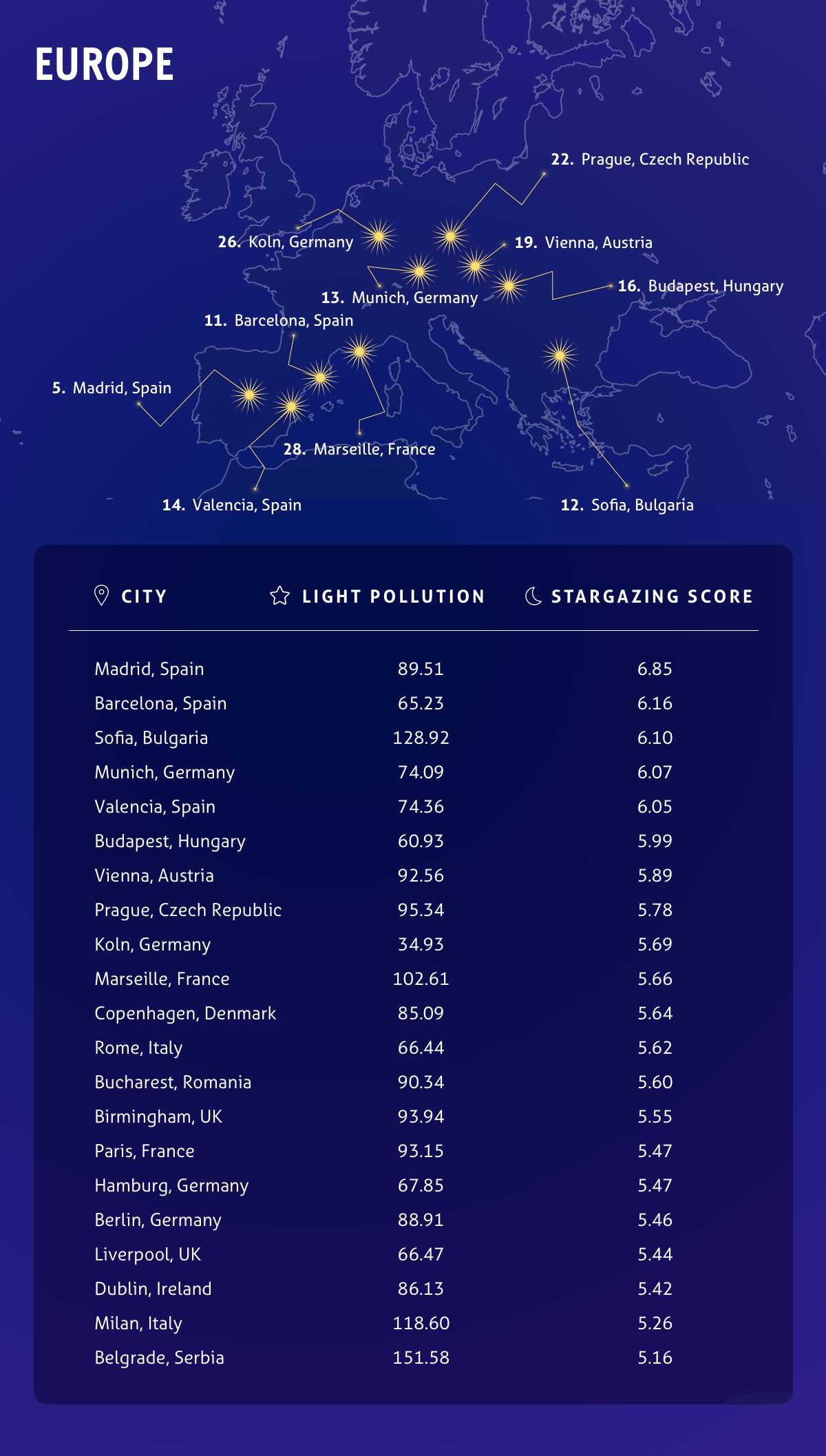 Top cities for stargazing in Australia

Australian cities feature further down the list. Newcastle is the second Australian city to make the list, in 15th place, followed by: 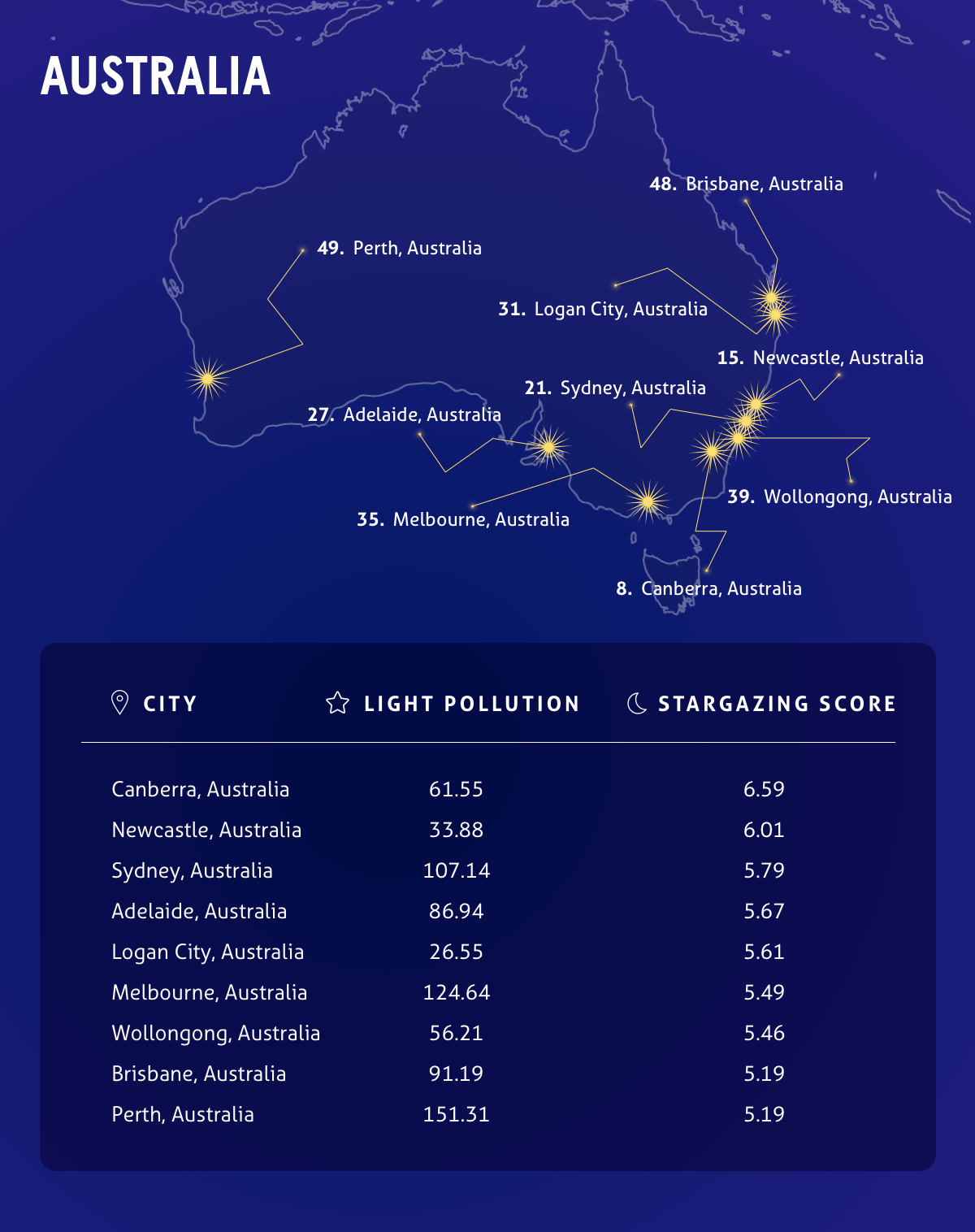 Light pollution levels and energy consumption around the world

While factors such as average temperatures, levels of rain and altitude all play a part in how good a city is for stargazing, a huge factor is light pollution levels.  Out of all the cities included, the lowest light pollution levels come from Kitchener, Canada, with just 25.78 (placing 10th). In fact, there are several Canadian cities that have lower levels of light pollution than many other places around the world; Montreal has the fourth-lowest level on our list, with Edmonton, Toronto and Ottawa close behind.

High levels of light pollution mean that, naturally, more energy* is used – and some countries are paying more for energy than others because of the sheer amount they use.

In terms of energy usage in 20201, Iceland surprisingly used the most at 61,280.76 kWh per capita, followed closely by Norway at 22,879.31 kWh. Even though seven Canadian cities are featured on our list of top 50 places to stargaze Canada has one of the highest electricity usage figures at 15342.52 kWh per capita.

The US with all of its stargazing hotspots used 12,724.23 kWh of electricity per capita in 2020, placing them in 10th position. Australia followed close behind in 15th place.

Spain, as another prime location for staring up at the stars, came in 34th for energy usage, showing just how much light pollution can affect the visibility for stargazing.

So, whether you’re really into astrology and want to see as many constellations as possible, or you’re a complete novice that fancies a romantic evening under the stars, your best bet is to head somewhere that has lower levels of light pollution.

And if you know that you’re guilty of leaving the lights on a bit too often, then it’s time to turn them off to both save some money and reduce your contribution to light pollution. Then again, you might suspect that your bills are higher than they should be; in that case, you can compare your energy plans with us.

This ranking table looks at the best major cities for stargazing, across Europe, the United Kingdom, Australia, Canada, and the USA. This list was created by looking at four different factors: light pollution, altitude, average temperatures, and yearly precipitation.

After the data** was compiled, each factor was indexed to give a value between 0 and 1. The light pollution and yearly precipitation factors were given a higher indexed value if they were lower, whereas the altitude and average temperature factors were given a higher indexed value if they were higher. A higher temperature is more comfortable for potential stargazers, hence why it ranks higher. Each factor was then given extra weighting depending on the importance to stargazing; light pollution was given a weight of 4, altitude a weight of 3, yearly precipitation a weight of 2, and average temperature a weight of 1. The indexed scores were then added to provide a total score for each city out of a maximum total of 10. The cities were then ranked based on this score.

All cities in Ukraine and Russia were not included in the research.

Brought to you by Compare the Market: Making it easier for Australians to search for great deals on Energy Plans.