How concerned do people feel about the effects of climate change?

The state of our planet and the uncertainty of the future are two topics that go hand in hand for many people that are concerned about the environmental impact of humans. It can be a truly divisive issue, particularly given it is a hot topic around the globe.

To find out how people truly feel about climate change – how concerned they are about it, what they’re doing to prevent it, and whether they’ve already experienced it – energy comparison website Compare the Market surveyed adults across Australia, Canada and the United States.

The results indicate that while the majority of people are worried about the potential impacts of climate change, all hope is not yet lost.

Just so we’re all on the same page, the United Nations defines climate change as long-term shifts in temperatures and weather patterns.1 Throughout history this has occurred naturally, but since the industrial revolution of the late 18th century, human activities (such as logging and the burning of fossil fuels like coal, gas and oil) have rapidly accelerated global temperature increases beyond anything seen in any of the record books.

The Earth is now about 1.1°C warmer than it was in the late 1800s, and every portion of a degree that increases, a whole host of things like natural disasters, animal endangerment, rising sea levels, water and food scarcity (we could list many more) get worse.

Thanks to organisations like the Intergovernmental Panel on Climate Change (IPCC), we now know beyond a shadow of a doubt that humans are causing this shift in our climate. The question is, just how worried are we, and what do we plan to do about it?

How many people are concerned about climate change?

According to our survey results, Canadians are the most worried about the potential impacts of climate change, with 87% of respondents expressing concern. That’s just above the 82% of Australians who said they were concerned about climate change and well ahead of Americans at 72%.

These results are interesting as, while climate change will affect each country, most studies show Australia will be hit harder than most other developed countries, in part due to the extensive desert areas across the nation. According to the 2021 Climate Risk Index, Australia (19) was ranked above Canada (62) in terms of current and potential risks associated with climate change.2 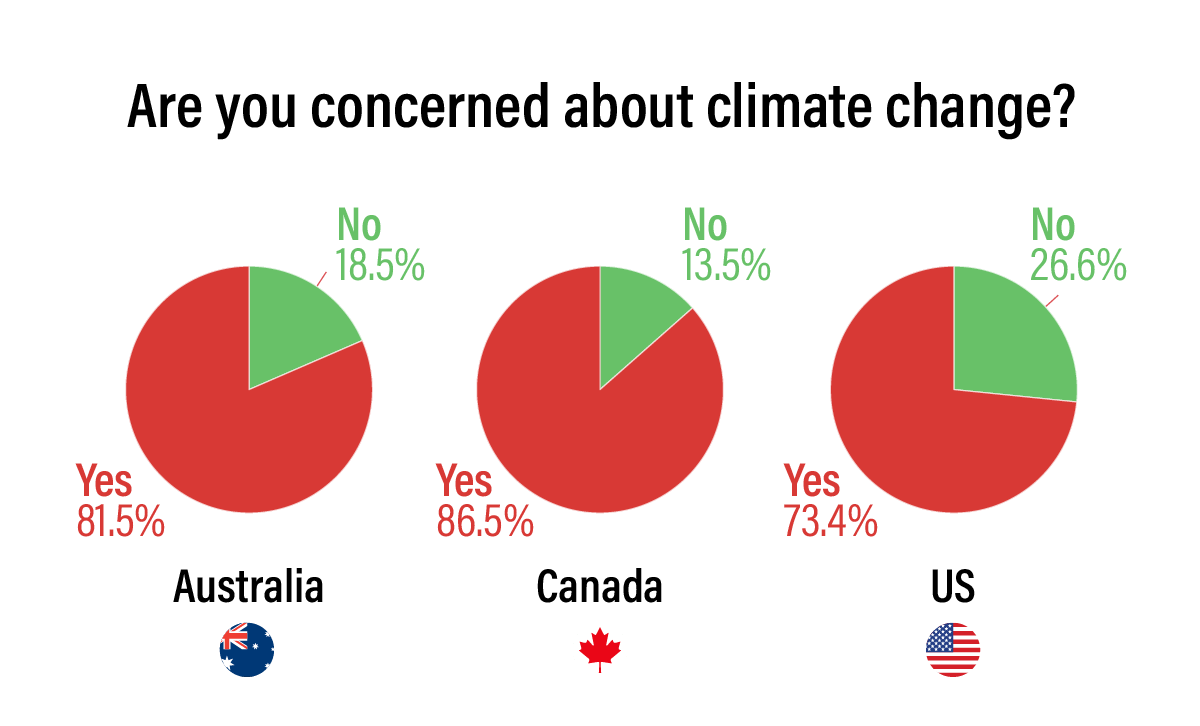 Are people satisfied with the government’s approach towards climate change?

Based on current projections, the world is set to comfortably miss the targets set out in the 2015 Paris Agreement to limit global temperature increases to 1.5° Celsius. The latest IPCC report says we may be on track for an increase as big as 3°C3 — twice the Paris Agreement target – which is alarming!

All three of the countries surveyed by Compare the Market – Australia, Canada, and the United States – are among the worst offenders in terms of mitigating and preventing climate change. The 2022 Climate Change Performance Index actually puts all three in the bottom quarter of the 64 countries ranked in their study: America was the highest ranking in 55th; Australia 58th; and Canada 61st, just three places above bottom-placed Kazakhstan.4 In other words, even major players think these nations aren’t actively doing enough.

This poor performance is reflected by our survey results. When asked if their country was doing enough to combat climate change, 63% of Australians, 62% of Canadians and 65% of Americans said they were not. 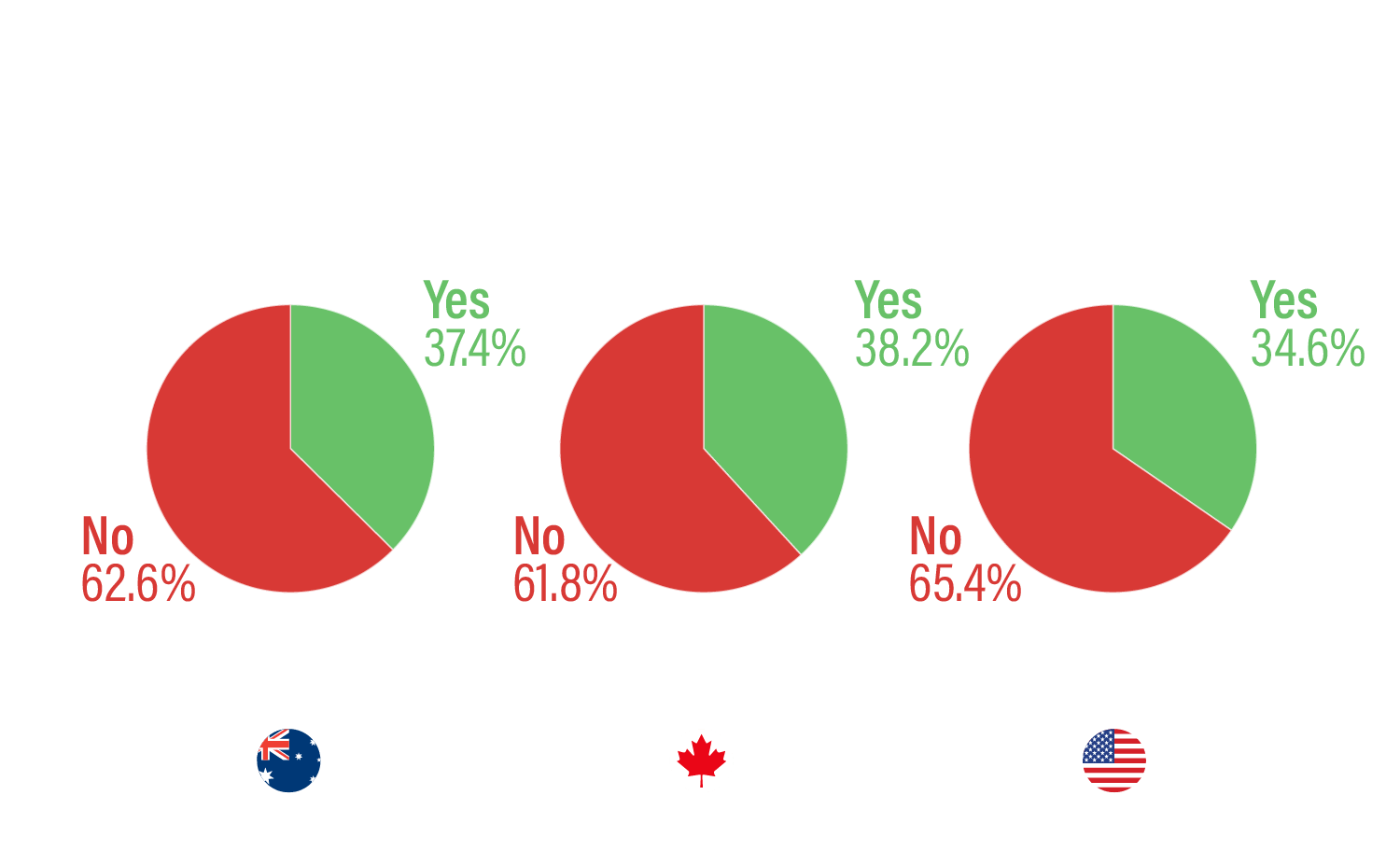 While climate change is undoubtedly caused by human activity, debate is still common as to who exactly should bear the responsibility of the unenviable and massive task of reducing global emissions and transforming society as we know it.

Should governments be responsible for passing legislation that tackles climate change by meeting global targets and penalising polluting corporations? Or is it the responsibility of the individual consumer to lead by example, to force change by cutting down on their meat consumption, reducing waste and switching to green energy alternatives?

If our survey results are anything to go by, the answer is a bit of both, but Australians, Americans and Canadians all seem to lean towards the individual: 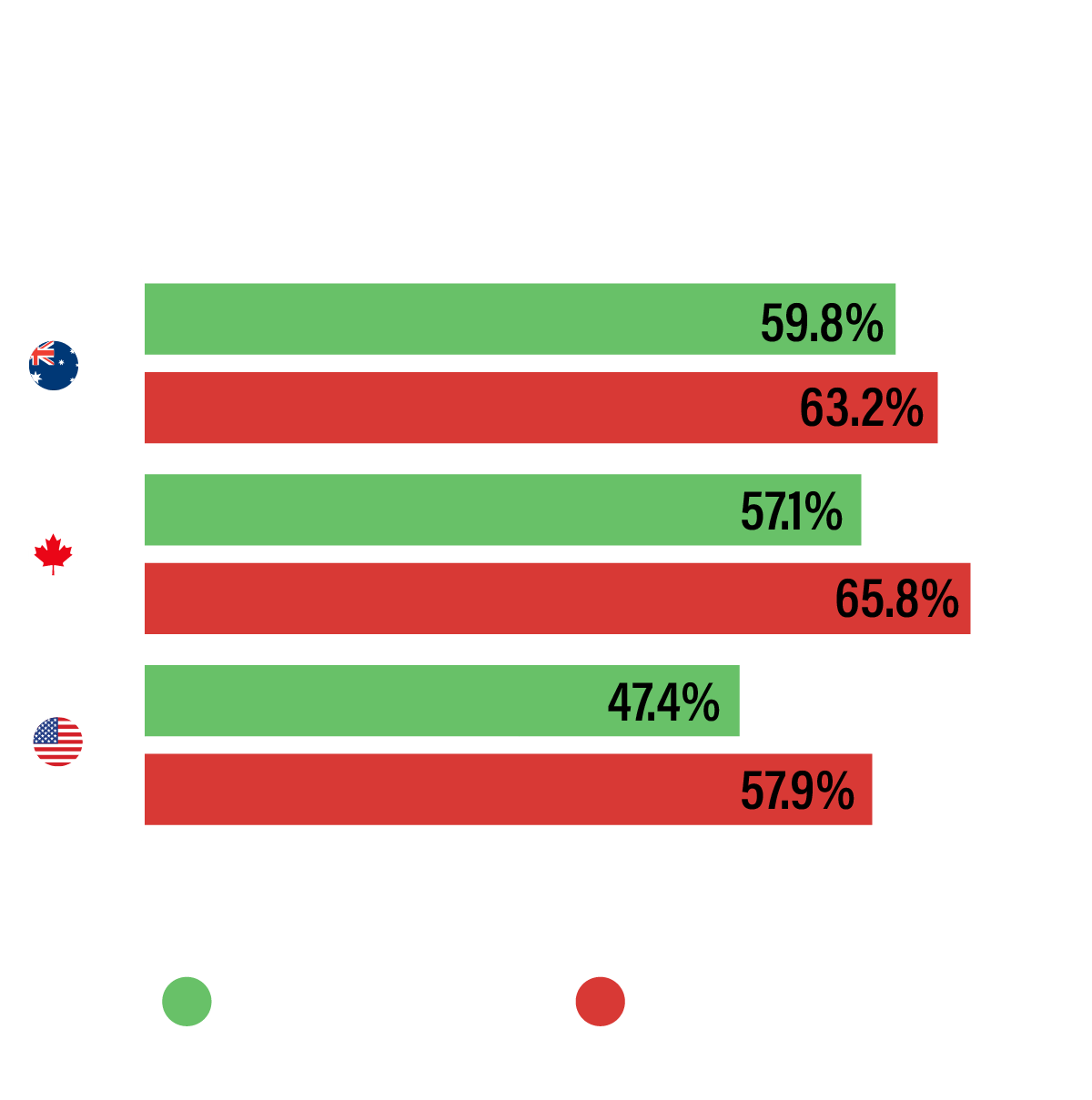 More than 20% of Americans felt the steps they take as individuals do not make a difference to climate change, compared to 16.5% of Australians and 13.1% of Canadians. 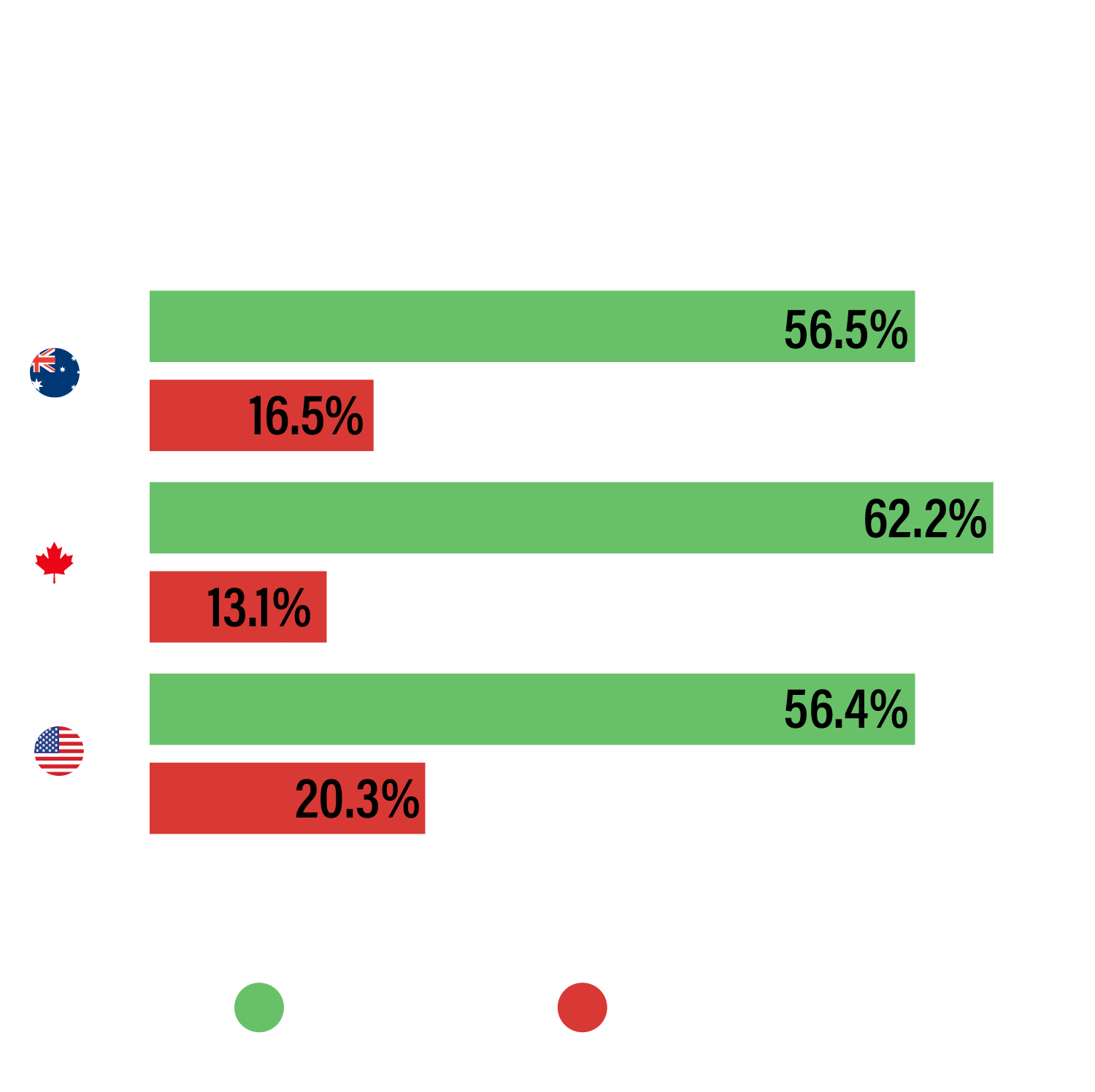 Analysis by the Climate Accountability Institute in 2019 found 20 fossil fuel companies contribute more than one-third of all global greenhouse gases.5

How hopeful people feel about the future of our planet

Despite the rather dire future we may face in certain climate change scenarios, people still seem to be remaining optimistic. In fact, on average between the three countries, 55% of people say they felt either “very hopeful” or had “some hope” about the future of our planet.

Americans were the most optimistic:

However, nearly 26% of people on average also said they did not have much hope, while more than 3% responded saying they had “no hope at all”: 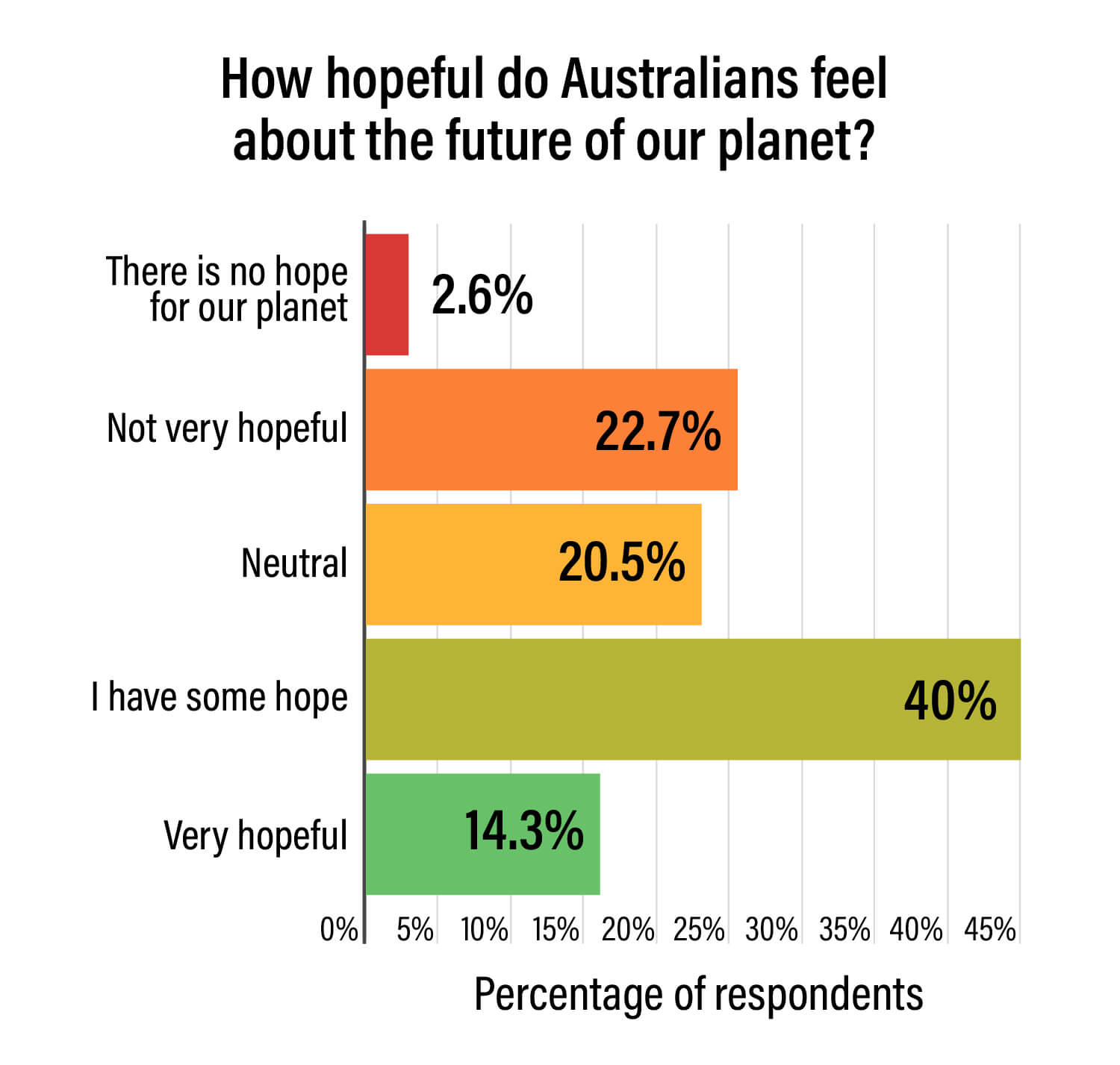 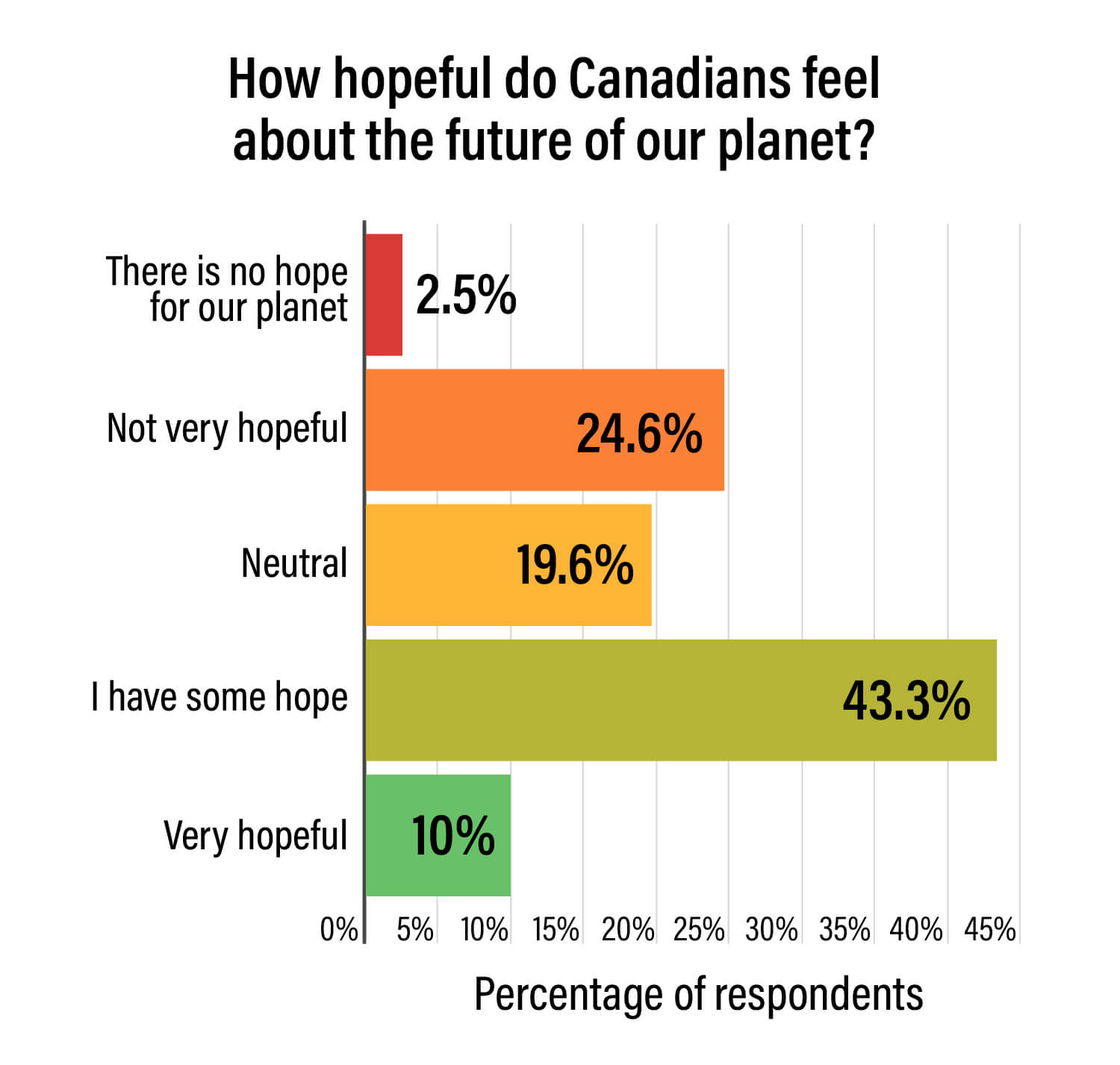 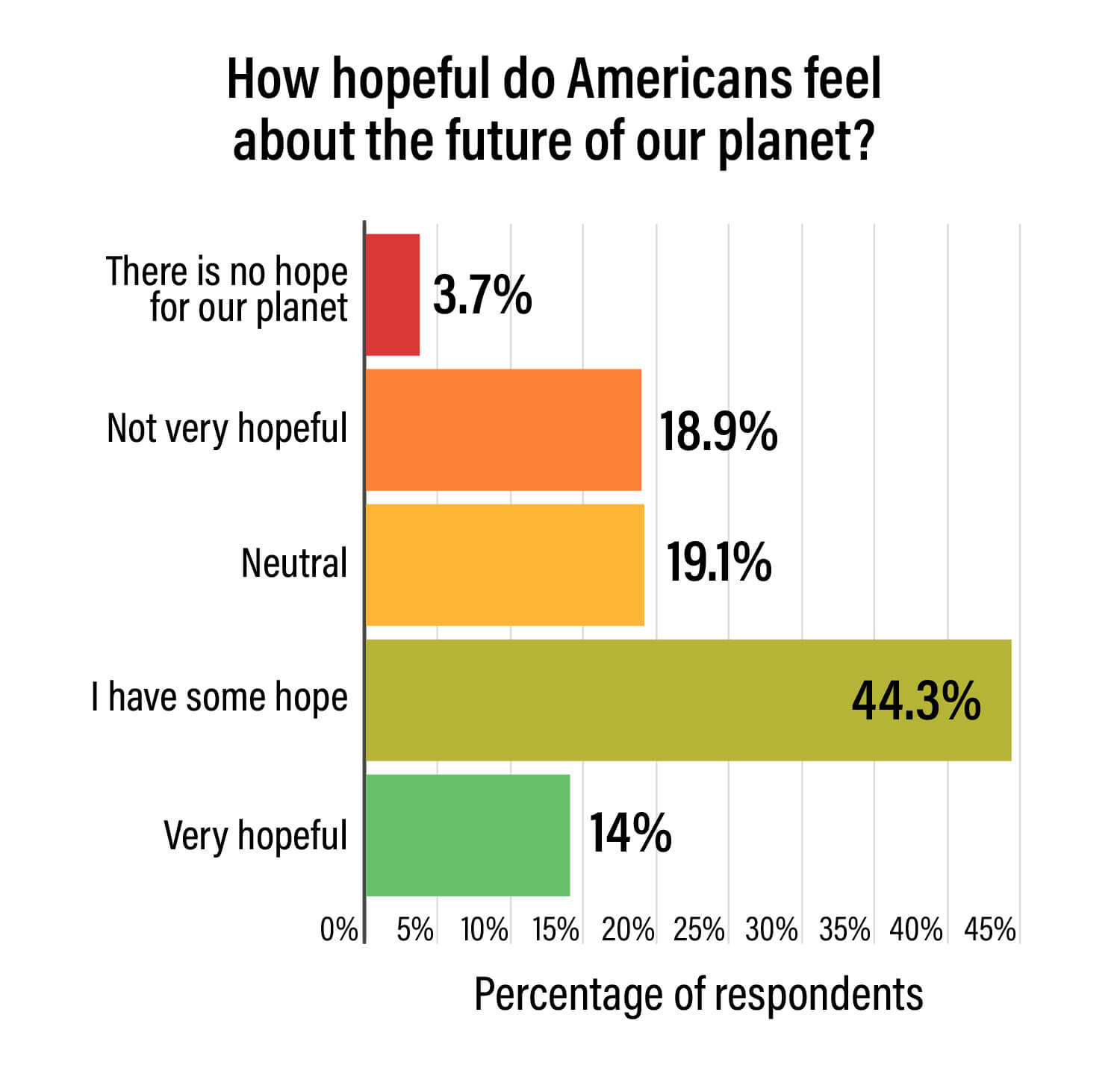 Given the majority of people in each country both a) still have some hope for the future and b) believe individuals have a responsibility to tackle climate change, it’s promising to see that many people are taking steps to actively minimise their environmental impact.

We asked respondents in each country what actions they were taking to reduce their carbon footprint, and the top answers included the likes of:

Despite this, on average, just under 10% of people said they didn’t take any actions to minimise their impact towards climate change. 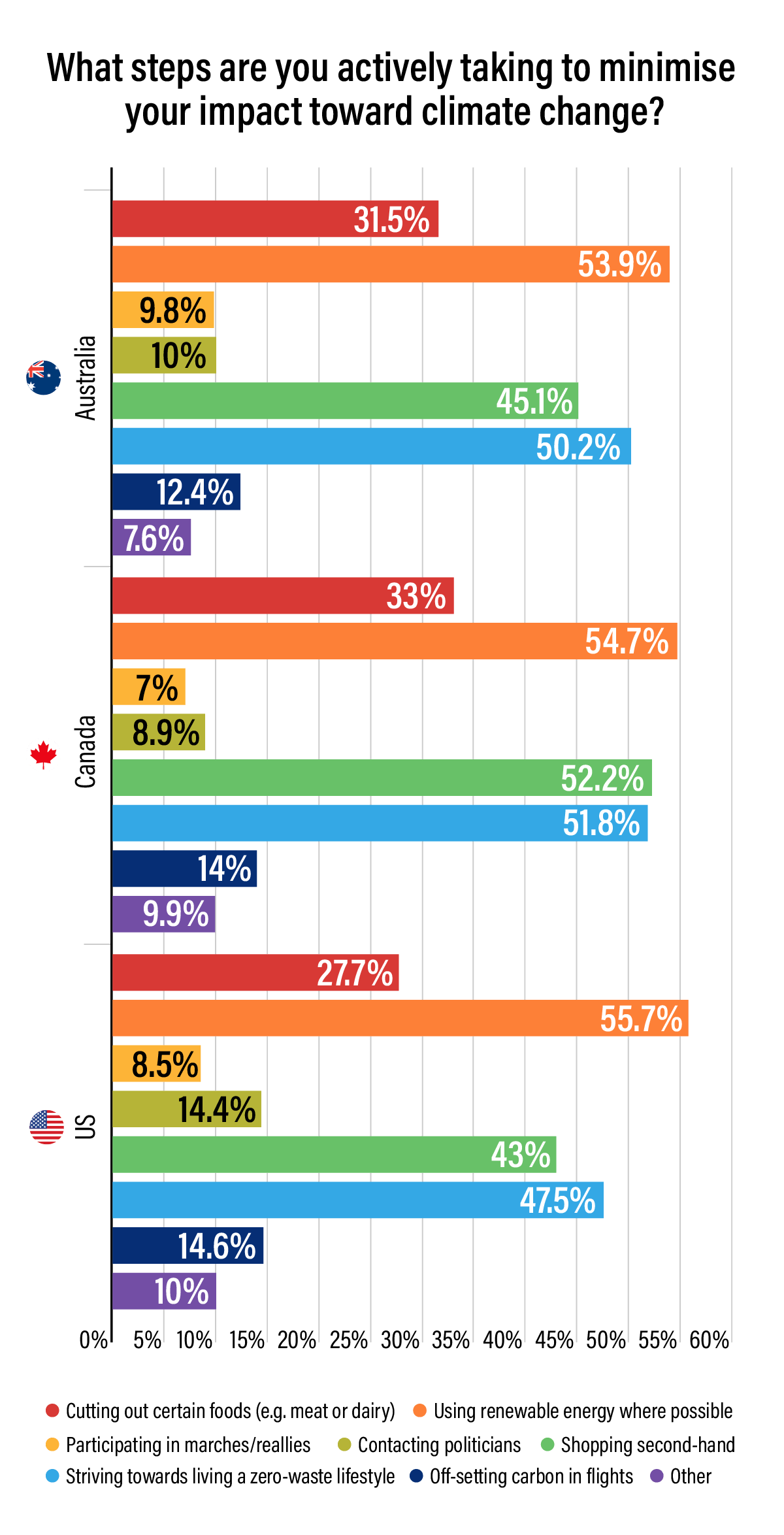 How many people have already been personally affected by climate change?

Climate change is often thought of as some future event, but as a recent IPCC report makes clear, it’s already here:

“Climate change is already affecting every region on Earth, in multiple ways. The changes we experience will increase with additional warming,” the report said.6

Most people are in agreement with the IPCC’s statement. In both Australia and the United States, 57% of people said they have already been personally impacted by climate change. But far more Canadians (69%) said they’ve already experienced climate change than either of the other two nations. 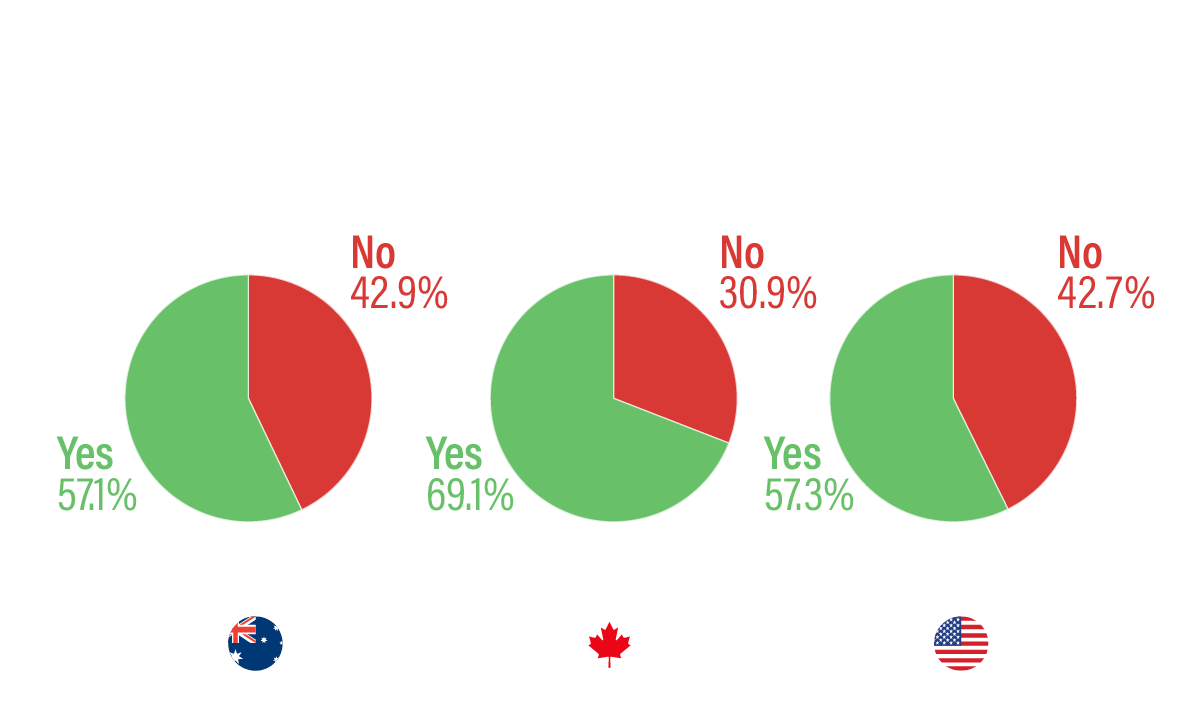 The possible ways people can be affected are wide-ranging. There are the obvious examples such as bushfires, floods, powerful storms and droughts, but things like food shortages, heatwaves, communities being displaced, illness and disease, and even the loss of local wildlife could also be considered.

Does climate change influence where people choose to live?

Thankfully, based on all these responses, it appears that people are taking the issue seriously when it comes to choosing where they live. We asked respondents in each country if the potential impacts of climate change would impact where they chose to live or buy a home, and the majority said it would: 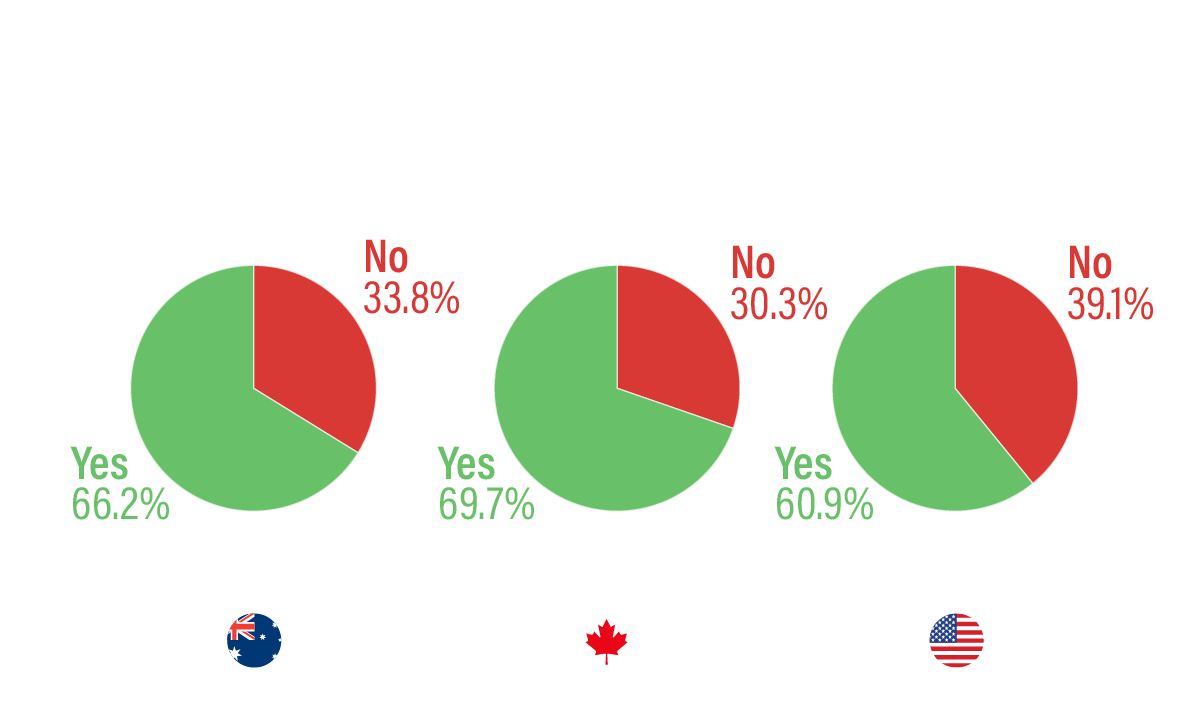 Considering climate change when choosing where to live can involve things like looking at natural disasters maps (such as floods, cyclones, hurricanes and tornadoes, fires etc.), checking out insurance premiums, analysing sea level increases in coastal areas and much more.

What do energy experts think about climate change?

Compare the Market’s General Manager of Energy, Brett Mifsud, explains how something as simple as energy usage can influence the effects of climate change on a larger scale.

“If you are looking to reduce your carbon footprint in the wake of the climate change movement, you can do so in a number of ways,” Mr Mifsud said.

“Climate change is caused by a plethora of compounding factors, one of which being the burning of fossil fuels.

“Depending on where you are located, switching to a green energy plan gives you the opportunity to offset the carbon emissions that your household produces.

“Another popular and common way to incorporate green living is by installing solar panels onto your home.” 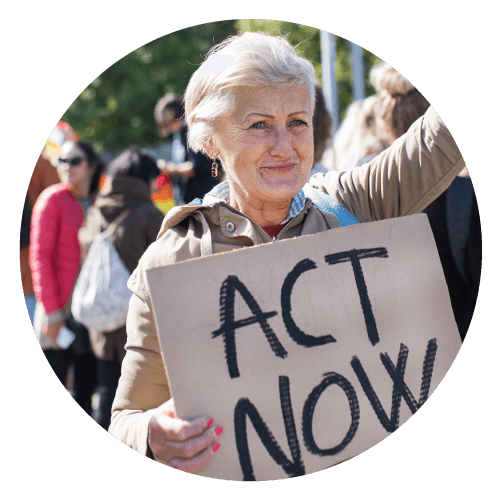 If you are considering switching to a more environmentally friendly energy plan, comparing your available options could be the best place to start. Compare the Market’s free energy comparison tool is a great way to compare multiple plans side-by-side with ease.