Governments across the world have advised their citizens to ‘social distance’ and ‘stay-at-home’, which has helped flatten the curve of the COVID-19 (novel coronavirus) outbreak – but it’s also affected other areas of life.1 Road traffic is one area that has seen a dramatic decrease in many countries around the world.2

However, how likely is it for the significant decrease in the number of road users to see a correlating reduction in road-related mortalities?

To gain a measure of comparison, we’ve recorded the number of road-related mortalities that occurred in a year for 15 different countries. 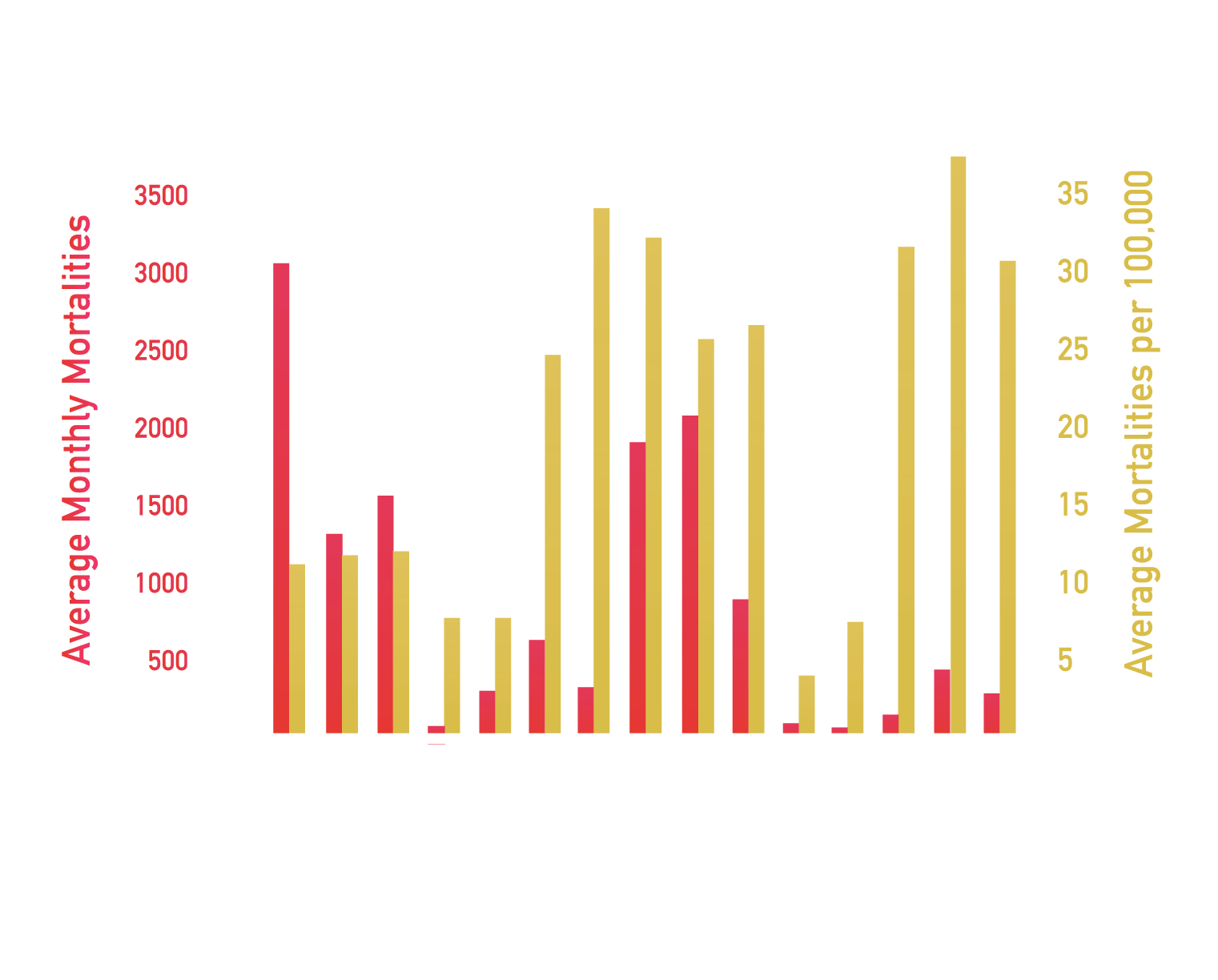 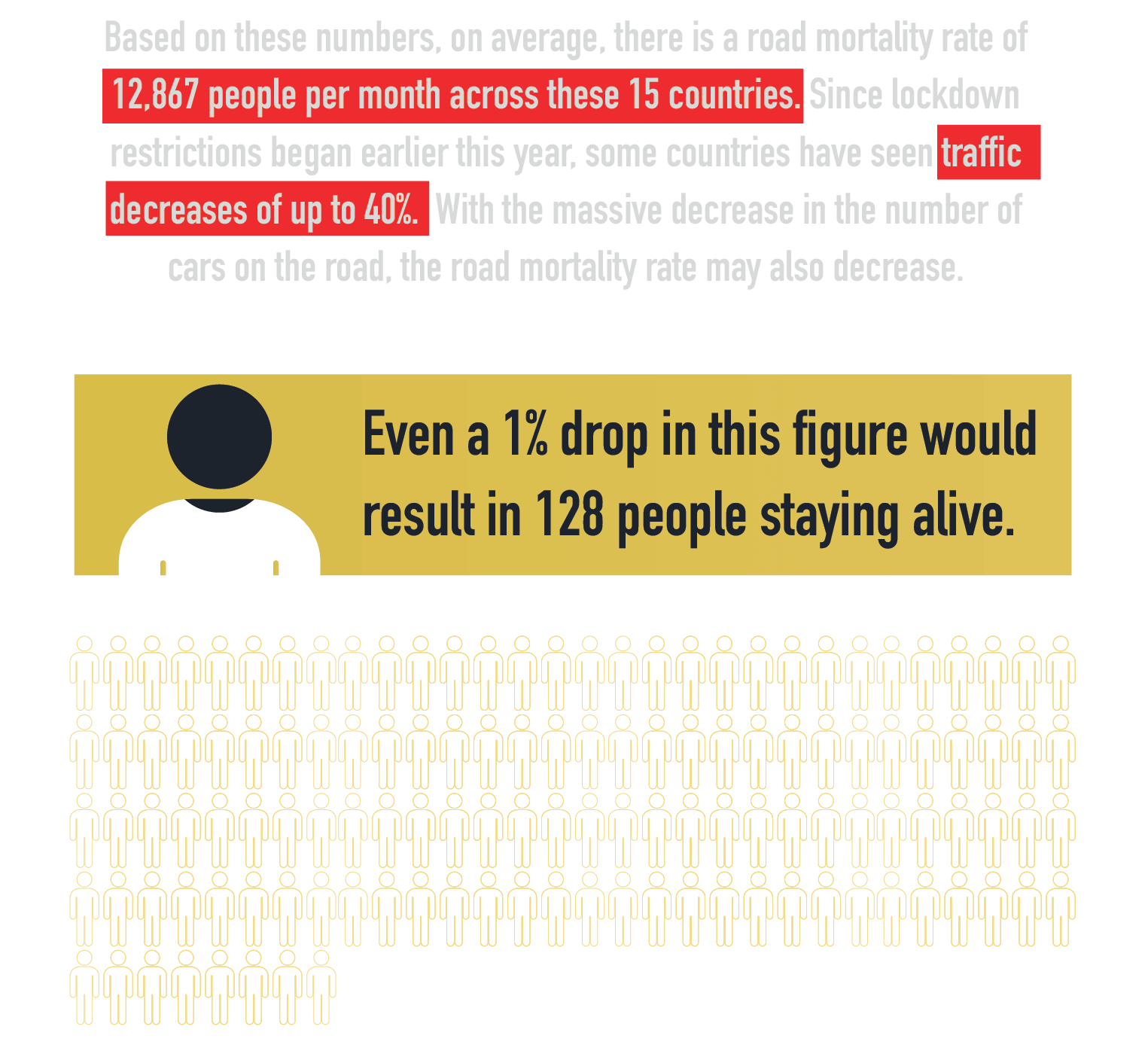 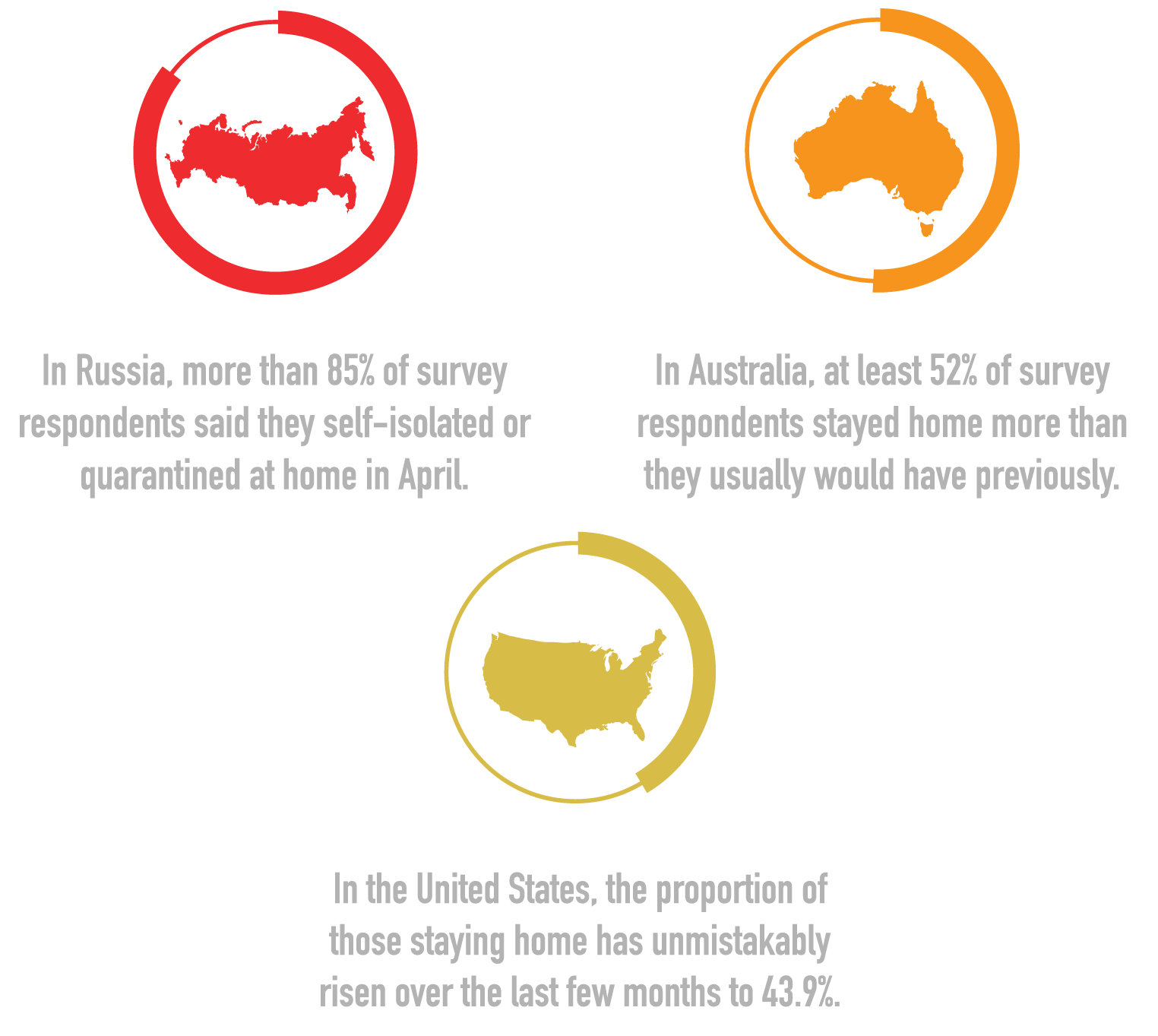 While most countries are waiting to release data at the beginning of 2021, Australia’s monthly reports have already seen a drop in road-related mortalities. In fact, there were 1,105 mortalities in the year ending June 2020. While there are only 91 less mortalities than the previous year (1,196 mortalities), it’s the lowest it’s ever been in 10 years.9

That’s to say, the road mortality rate could, theoretically, be much lower for other countries as well. However, several factors will affect this.

What factors will influence the potential number of lives saved?

One of the leading factors that may impact traffic volume is the degree of ‘stay-at-home’ restrictions that governments have implemented throughout the world. Although the stringency and length of time these restrictions are in force varies from country to country, if all motorists comply with the restrictions, there could be a considerable decrease in traffic and also, potentially, the number of lives lost.

To gain an idea of just how stringent these restrictions are, we’ve laid out the severity of this restriction as well as any other specific curfews or free movement bans. The four categories in which the countries were grouped into regarding the stay-at-home restrictions include:

The guide below provides a comparison of various stay-at-home, curfew and free movement restrictions from the period 1 March to 11 June: 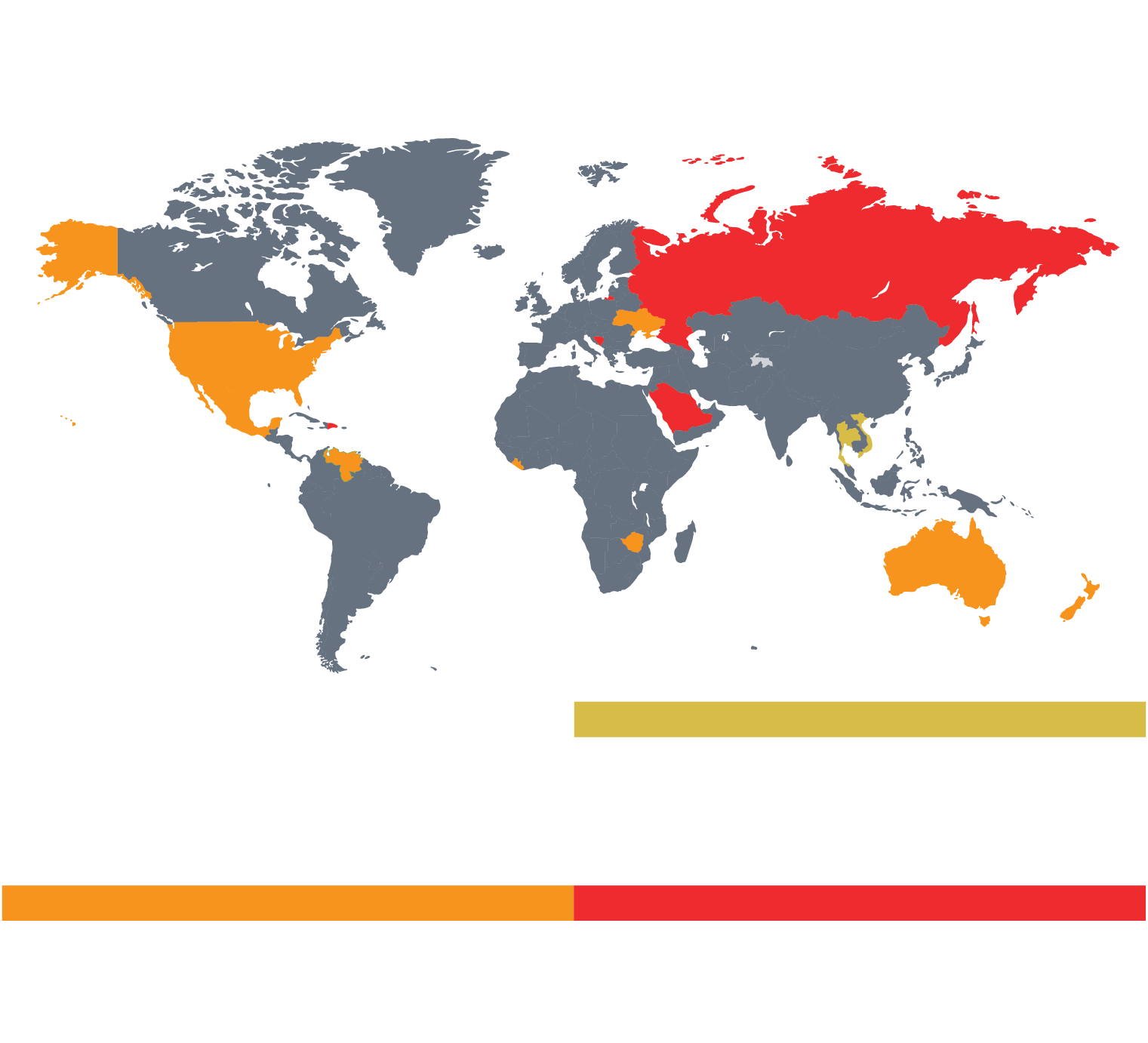 Curfews and movement restrictions,9 which are determined on a state-by-state basis. The government established a ‘traffic light’ system with four colours to indicate what level of activities are allowed.15

Not allowed to travel more than 2km from your home unless you have a digital pass in Moscow and some regions. Cars may be confiscated.16

Movement restrictions and the state of emergency and state of disaster has been lifted.17

Nationwide curfews between 7pm and 5am (Monday to Saturday); and 5pm to 5am (Sunday). Not allowed to leave home except to buy essential goods or access health care. All public transport was closed, but it has since resumed services at 30 per cent from 6am to 6pm.18

Curfew from 11pm to 3am throughout Thailand; some regions are more strict.19

Movement restrictions (which vary between provinces). Penalties apply for non-compliance. Travelling from provinces that have confirmed cases of COVID-19 can result in quarantine costs. Non-essential travel to certain provinces are banned.20

Some countries have been stricter than others with their stay-at-home restrictions. For example, in certain regions in Russia, travel has been limited to no more than 2km from your home unless you have a digital pass; non-compliance can lead to car confiscation.13

As aforementioned, with 85% of survey respondents reporting that they’ve self-isolated during the month of April, Russia would have seen a significant decrease in road traffic.

Events such as the Black Lives Matter protests, have seen worldwide protests to fight for human rights. This may have resulted in a temporary increase in the number of vehicles on roads.

Unfortunately, not all countries around the world have traffic laws and vehicle standards to increase safety and minimise the number of accidents. That’s to say, there’s a strong correlation between low road-related mortality rates and high vehicle standards and driving laws.4

Laws based on a BAC limit of no more than 0.05g/dL for the general population, and 0.02g/dL for young drivers.

Laws that set a limit of no more than 50km/h in urban areas with local authorities who can modify national speed limits.

Laws that mandate that all riders, including passengers, should wear properly fastened helmets on all roads while any type of motorized vehicle in which their head is exposed.

Laws that mandate that everyone in a motorised vehicle wear seatbelts, including drivers, front-seat and back-seat passengers.

Laws require all children who are younger than 10 or smaller than 135cm to use a child seat. Child restraints should be regulated, and children of a certain age or height cannot sit in the front-seat. 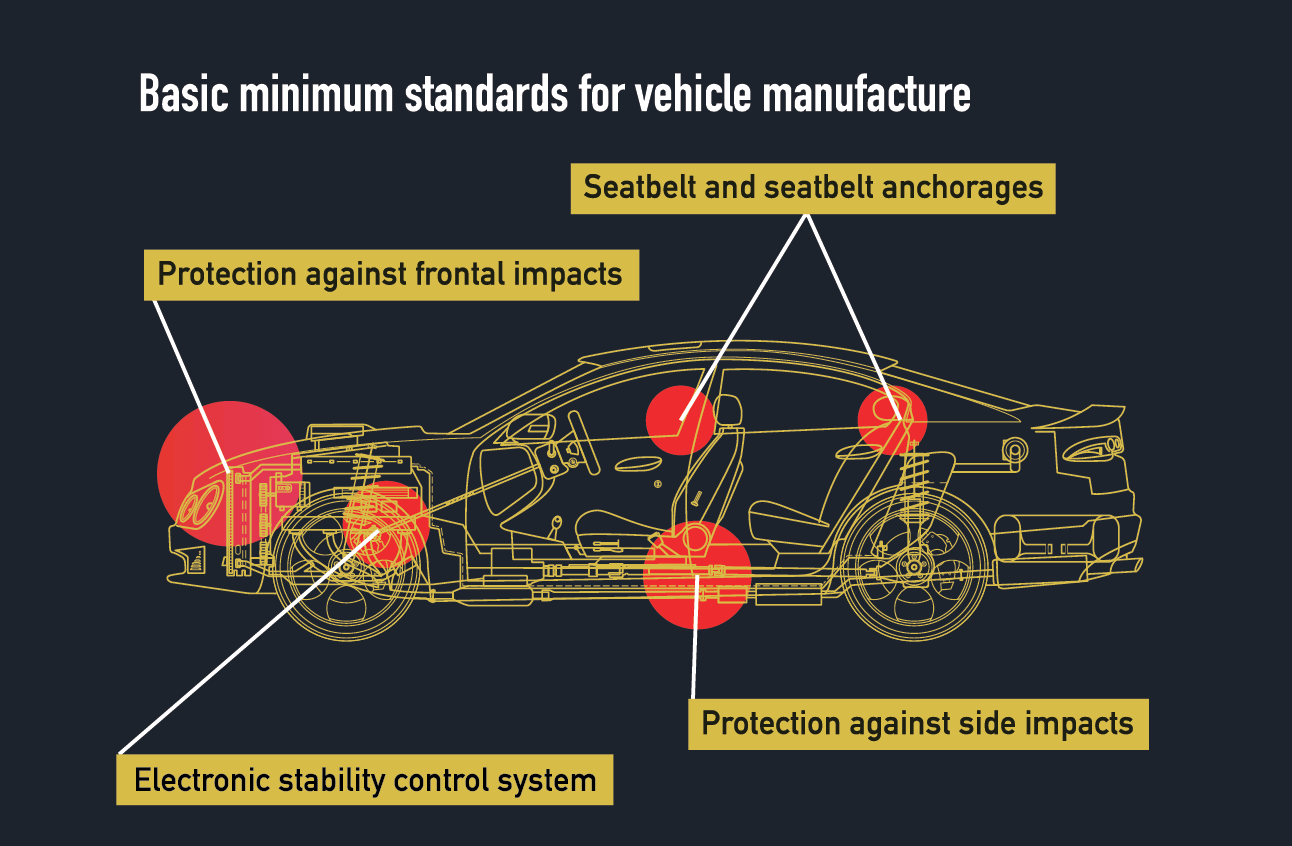 Most first-world countries have these fundamental laws and vehicle standards to keep drivers, passengers and pedestrians safe. However, many low-income countries do not, which is why the risk of a road-related mortality remains three-times higher in these countries.22 While these standards are basic requirements in some countries, many countries still consider these essential safety features as ‘add-ons’.4

Stay safe during and after COVID-19 lockdowns by following the advice of your government. Follow traffic directions and refrain from speeding to keep yourself and those around you safe.

You may also want to consider life insurance. A life insurance policy can provide a lump sum payout to your beneficiaries in the event that you pass away, including in a traffic accident. This can be particularly helpful if you have family and dependents.

We do not compare all life insurers or products in the market. Any advice given is general and does not take into account your objectives, financial situation or needs. You should consider whether the advice is suitable for you and your personal circumstances. Before you make any decisions about purchasing products, read the PDS for your product.

Brought to you by Compare the Market: Making it easier for Australians to search for great deals on Life Insurance.