Awkward! Half of Australians are getting this everyday phrase wrong.

Longer, hotter days are finally upon us as we enter the summer time zone. But it turns out most Aussies aren’t that switched on about the clock change, with much confusion about what the annual ritual is called.  A Compare the Market investigation has cleared up the embarrassing mistake half the nation is making. No, it’s not faded curtains.

We asked more than 1,500 adults across New South Wales, Victoria, South Australia, Tasmania and the ACT (i.e. Sorry, Queensland and WA) whether they had been caught out by gaining or losing an hour.

One in three people (32%) confessed they’d forgotten to switch their clocks and had been late to work or an event. That’s a lot of stressful mornings!

But the most shocking finding by far was the number of people who failed our spelling test. Should we say DAYLIGHT SAVING, or DAYLIGHT SAVINGS? The ‘s’ makes all the difference. We posed the following question to 1,502 people:

“Which of the following is the correct terminology for the period when we change the clocks for summer?”

Here’s what they said: 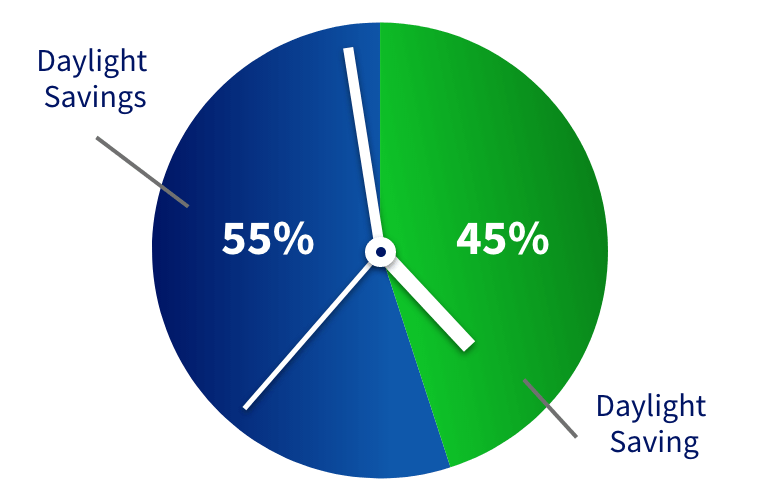 The majority of respondents got the answer WRONG. According to the Australian Government (yeah, what do they know anyway), this time is officially known as DAYLIGHT SAVING. So, the ‘s’ in Daylight Saving Time (DST) stands for Saving, rather than Savings.

Daylight Savings is in fact a meerkat trademarked term that describes the ways you could compare and save on your insurance, home loans and energy bills.

We found that men were more likely than women to get the answer right (52% vs 38%), while across the states, those in South Australia were most likely to correctly say ‘Saving’ at 55% versus just 39% in Victoria. Come on Victoria, seriously…

Just 17% of young Aussies aged 18-24 correctly identified Daylight Saving as the correct terminology compared with 77% of those aged 65 and over.

So, just to be clear, for times when the clocks go forward, say Daylight Saving. For Savings on your insurance, energy and home loans come to Compare the Market.

Now you’re getting it.

But are the clocks going forward or back?

Next, we decided to quiz the great Australian public on the direction clock hands are turning: forward or back? Here’s the question:

“Which way do you expect the clocks to change next in your area?”

And how respondents answered: 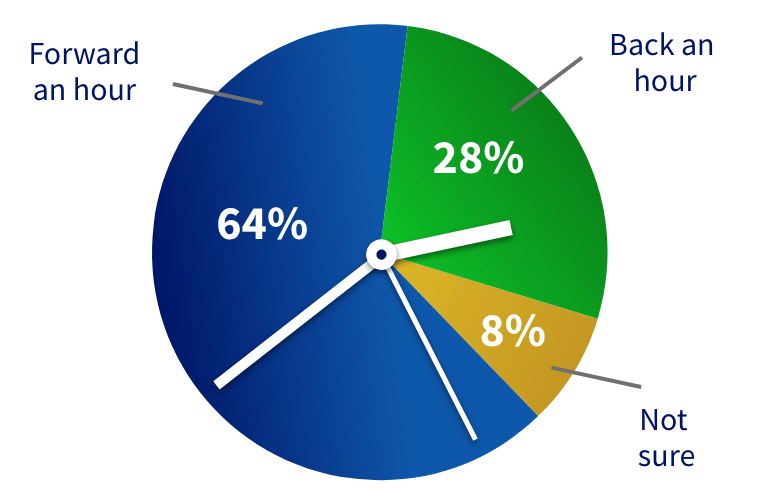 Maybe that’s wishful thinking – we could all use an extra hour.

Which clocks are wrong?

Almost half of survey respondents (49%) said all the clocks in their home were showing the correct time, which leaves a small majority of people who are living one day to the next knowing that some of their clocks are showing the wrong time… how can they live like this?

We wanted to find out which clocks are most likely to be wrong around Aussie homes. The results: 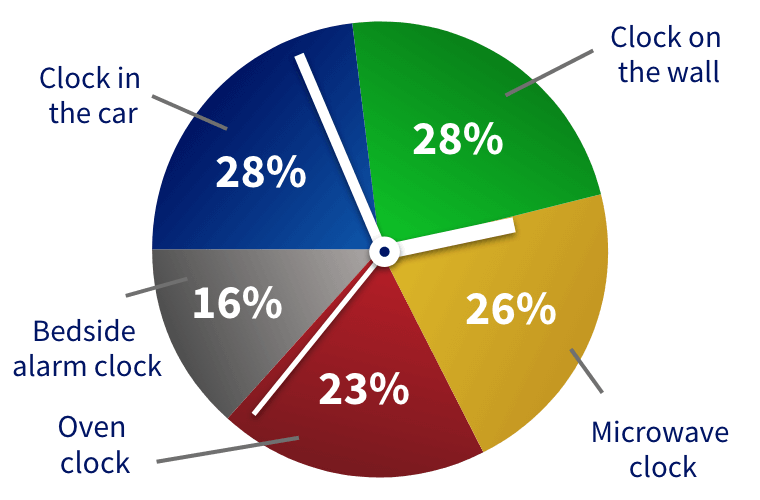 Men were more likely to have incorrect clocks inside the house (that’s ovens, microwaves and bedside tables). That could explain why some people overcook their dinner.

Meanwhile 29% of women neglected their car clocks. That’s one way to make sure you aren’t late!

Aussies who forget to change their clocks – or couldn’t be bothered – are also less likely to change financial products to save money.

Two-thirds of Australians (64%) admit they could probably be saving money on financial products if they simply put in more effort to compare…. that’s a lot of people who could be overpaying for things like energy and insurance when they don’t have to.

Nearly three quarters of Australians said that life would be less stressful if they could save some money on regular bills. Despite this, only 37% had actually switched a financial product or service in the last 12 months to save money.

It seems finding enough time could be part of the problem, with 45% of survey respondents admitting they usually just pay their bills every month or quarter without really checking the details. A similar number (41%) usually just accept their insurance renewal notices without challenge.

When the clocks go forward this year, consider taking a few minutes to check your bills and expenses, and search for a better deal at Compare the Market. Let us take care of your Savings while you take care of those clocks.