How your dog’s breed could affect your pet insurance

We take a look at some of Australia’s favourite dog breeds and the pros and cons of each.

It’s the eternal argument between pet owners: which is better, dogs or cats? Well, it seems Australia is pretty well decided – on dogs.

Before you argue back, yes, we have the stats to back it up!

In 2019 alone, there were more than five million pet dogs across Australia compared to just under four million cats, making man’s best friend our most popular choice of pet.1 That number is growing, too. In 2016, around 38% of Australian households owned a dog, and by 2019 that number increased to 40%.

So, it seems pretty apparent that we love our dogs, but which dog breeds do we gravitate towards most?

Most popular dog breeds in Australia

Maybe you’re thinking of getting a dog, or perhaps you just love them so much that you like to research them in your spare time.

Either way, our guide to the most popular dog breeds in Australia (according to the number of registrations for each breed in 2018, recorded by the Australian National Kennel Council)2 will step you through some of the basic ins and outs of each breed, including their origins, temperaments and any health problems that could potentially impact your pet insurance. 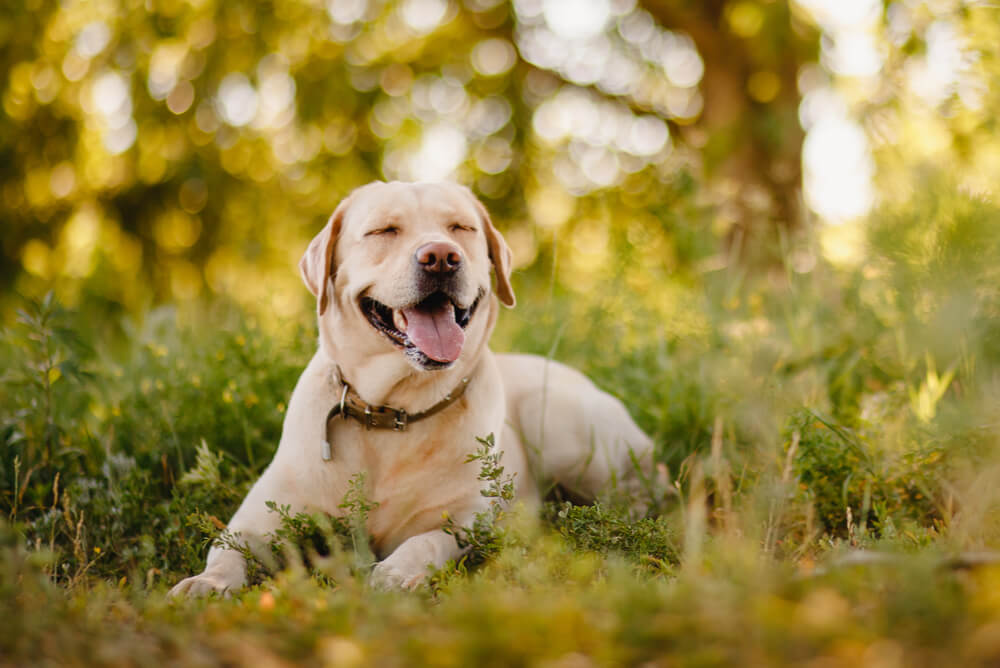 As Australia’s favourite dog breed, the Labrador is easily recognisable with its strong build, short fur coat and intelligent eyes.3 Labradors are smart, kind and active dogs that make for devoted pets.

The origins of the breed most likely lie in Newfoundland, Canada where they were used by fisherman to retrieve waterfowl and drifting nets.4 Because of their intelligence and kind, loyal nature, they’re well suited to working as guide and assistance dogs, as well as sniffer and tracking dogs.

Labradors are a pretty healthy breed of dog but aren’t immune to various health problems. The main issues Labradors generally suffer from include hip and elbow dysplasia, as well as epilepsy and progressive retinal atrophy.5 They also tend to be rather greedy with food, so obesity comes pretty easily to a Labrador! 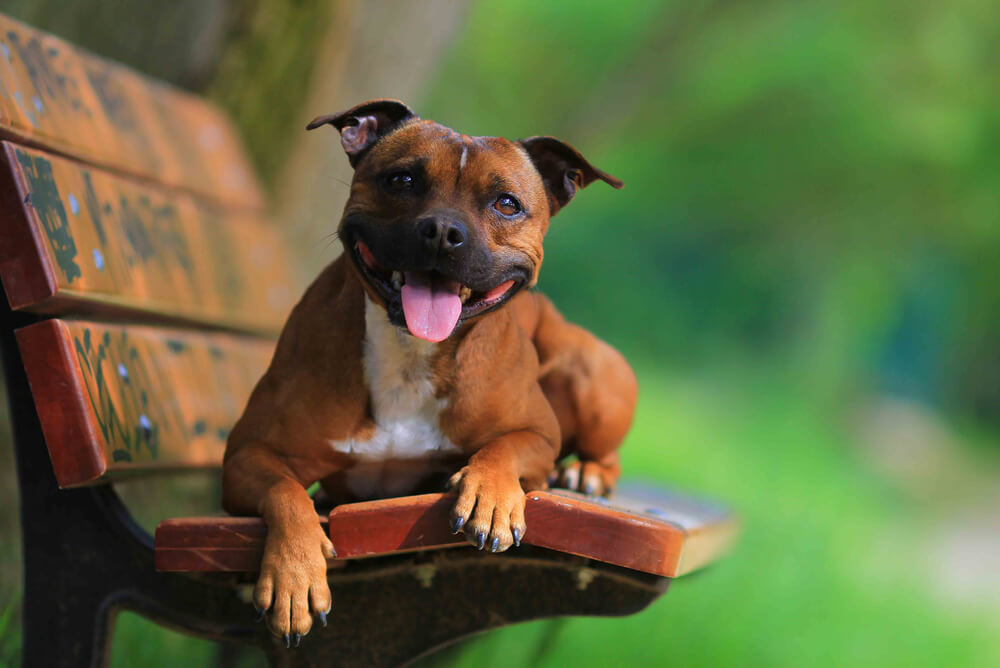 Affectionately known as a Staffy, the Staffordshire Bull Terrier is a smooth-coated, muscular, active dog with short body features.6 Despite their strong appearance and a bold, fearless temperament, Staffies are intelligent, affectionate and reliable companions.

Staffies were originally bred in England in the 1800s for bull and bear-baiting, but you would hardly guess judging by the modern Staffy’s friendly, gentle and lovable nature.7 They’ve even been known to work as therapy dogs.

However, there are a few health problems that Staffies are prone to, including congenital heart diseases, hereditary cataracts, hip dysplasia and hyperthyroidism.8 They may also suffer from sensitivity issues in their skin and stomach. 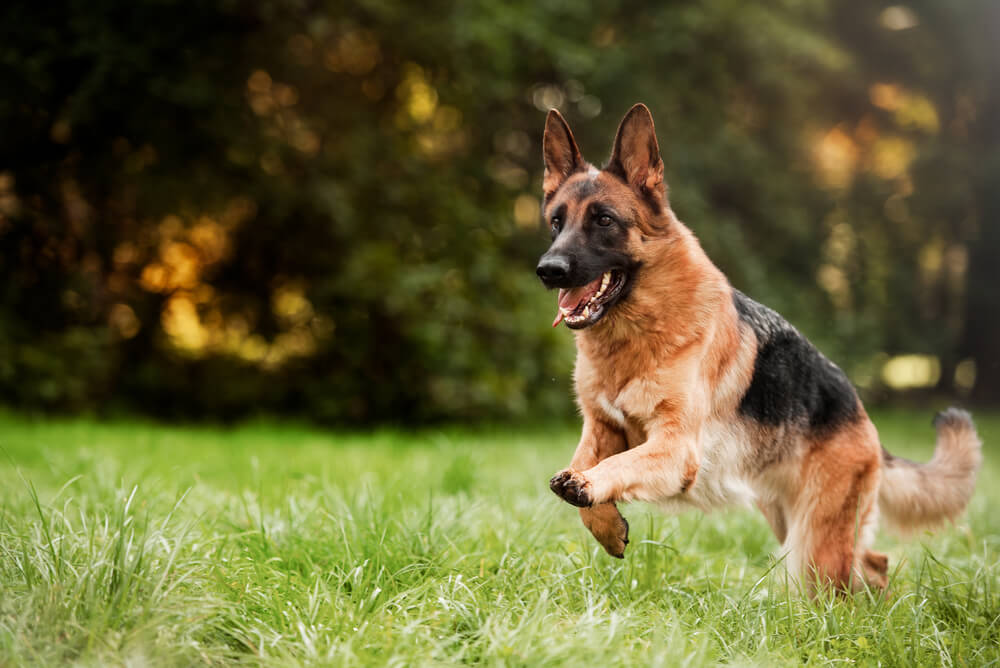 German Shepherds are easily recognisable, with a medium-sized build, gently curving tail and upright, pointed ears.9 Shepherds can also come in several different colours, with a mix of black and tan being the most common.10

Originating in Germany in the late 1800s, German Shepherds are exceptionally intelligent, devoted and attentive, and love attention from their human friends. This mix of traits means they make excellent family pets and work well as service, guard, watch, herding, protection and sniffer dogs.

Unfortunately, irresponsible breeding during the breed’s early days has led to some ongoing health problems for Shepherds.11 Hip dysplasia is a particularly prominent problem in Shepherds. Panosteitis (bone disease), bloat (stomach disorder in deep-chested dogs) and congenital heart conditions are some other health problems Shepherds can experience. 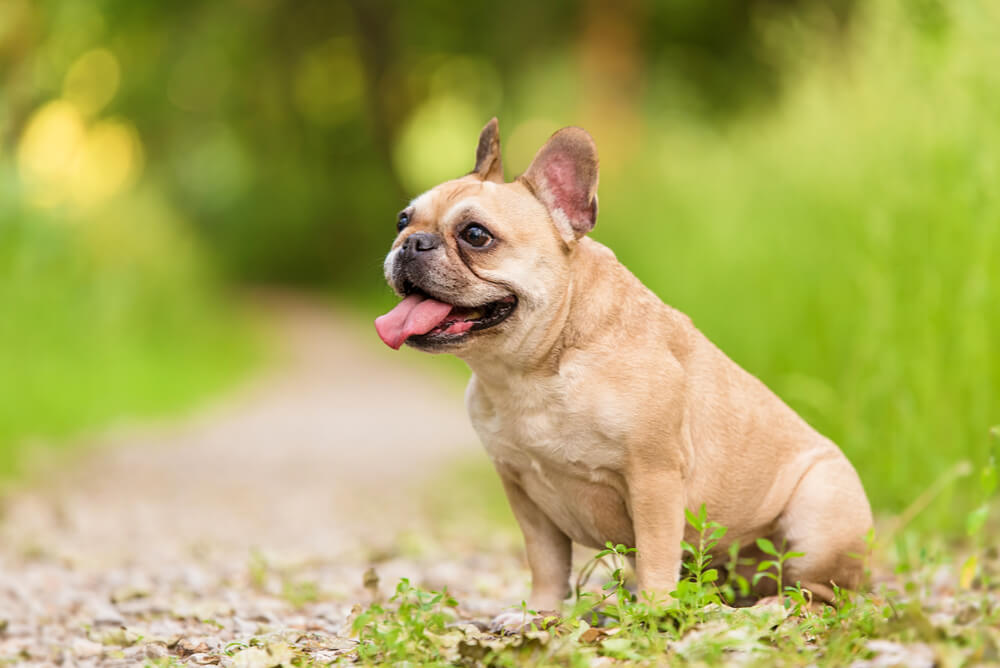 The French Bulldog – otherwise known as the Frenchie – is instantly recognisable for its trademark ‘bat ears’.12 One of the small dog breeds, Frenchies have a solid build, smooth coat and are quite affectionate.

The Frenchie’s origins aren’t exactly known, but it’s thought they were brought from England to France during the time of the industrial revolution, where they were developed further to become the dog we know today.13 Frenchies are playful, loving, sweet and funny little things, and can get along with just about anyone and any animal.

For all their cuteness and friendliness, though, Frenchies can experience some health problems. The main ones you’ll find amongst this breed include back weakness, soft palate issues and luxating patellas (dislocating knee joints). Frenchies are also prone to breathing problems and overheating. 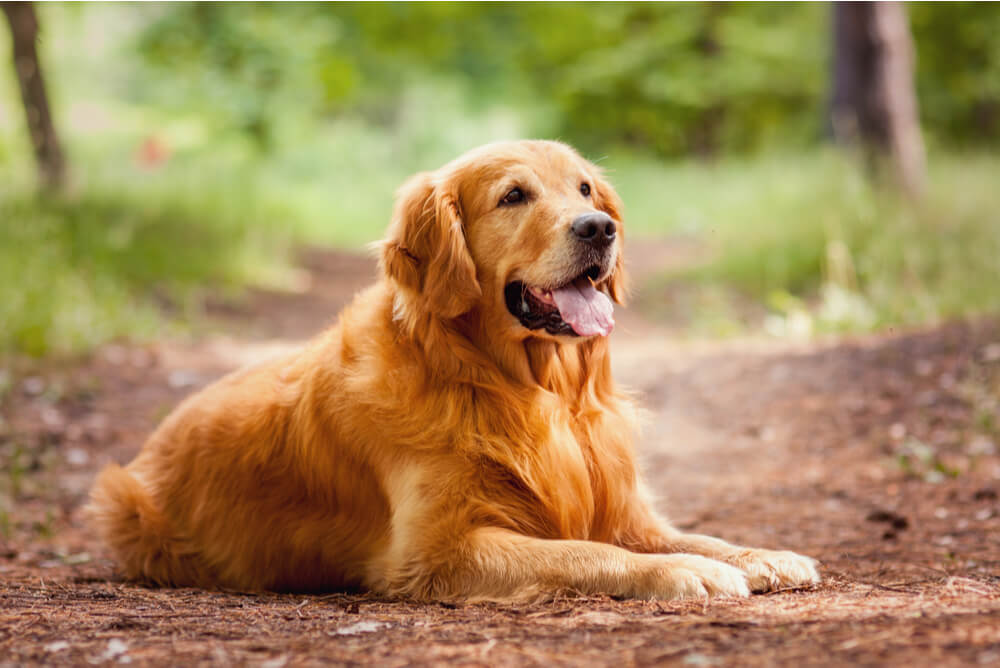 With their gentle temperament and sweet, kindly eyes,14 it’s no wonder why Golden Retrievers are one of the most popular breeds in Australia. They’re a large dog breed and are strong, but very affectionate and gentle, plus they love being around their family.

Retrievers are also highly intelligent and have been used as guide and therapy dogs.15 While they’re a pretty healthy breed of dog, they have been known to experience hip and eye problems, as well as osteochondritis dissecans (a bone disorder). 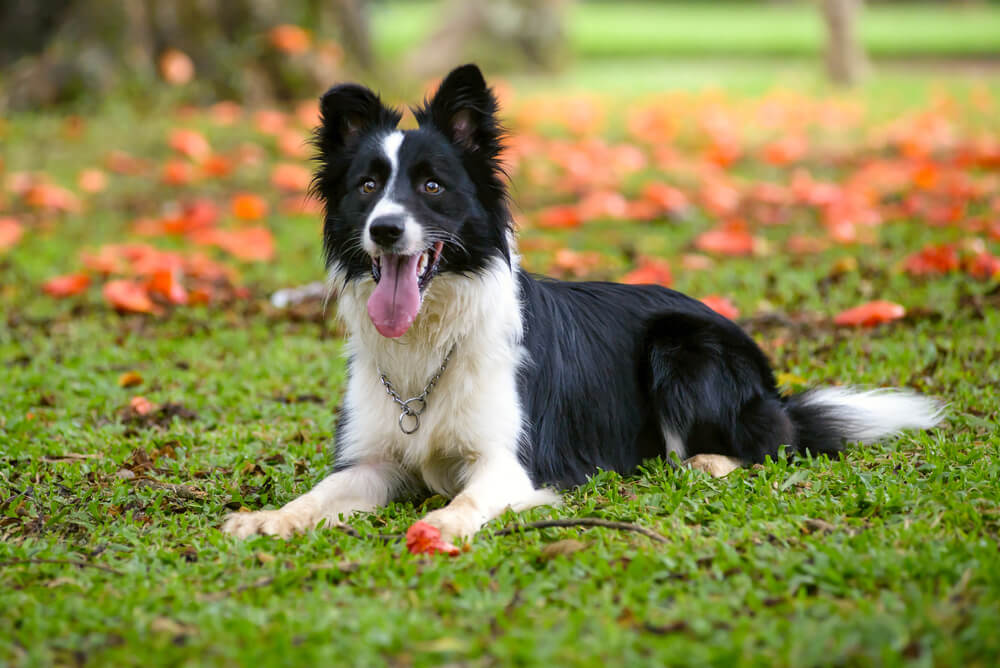 Border Collies are perhaps best known as working sheepdogs, but they also make for wonderful, devoted family pets.16 Their long, fluffy coats are commonly black and white, but you can also get a variety of red, mottled blue and brown-coloured Collies.

Their origins lie around the border areas of England and Scotland – hence their name – as herders for shepherds. Collies are among the smartest dog breeds, and they take to training and learning new skills like a… well, a dog to a bone!

Border Collies are one of the healthiest dog breeds out there; after all, as working dogs, they were bred to be hardy. They may occasionally develop bone problems if they’re not correctly fed during their youth. 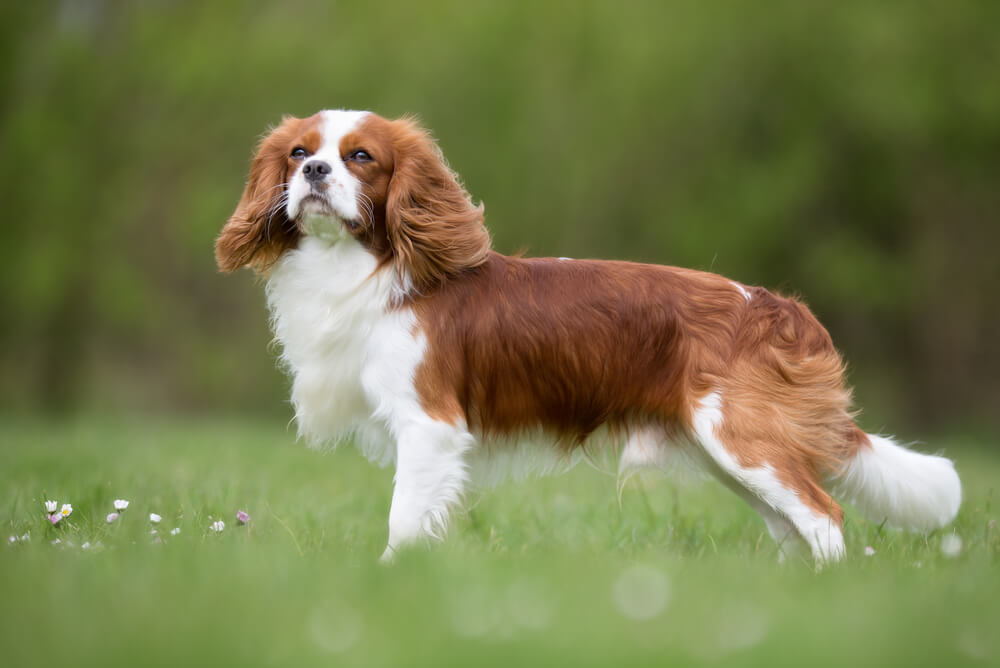 The Cavalier King Charles Spaniel has a long and rich history. They descend from the toy spaniels of the 16th and 17th century and are so named because of King Charles II’s great love of this friendly, easily trained small dog breed.17

They have long, silky coats and long, drop ears, and come in a range of colours including a mix of black, tan, ruby, red and white. However, Cavaliers are prone to several health problems, including heart murmurs, mitral valve disease, cataracts and subluxating patellas (slipping kneecaps). 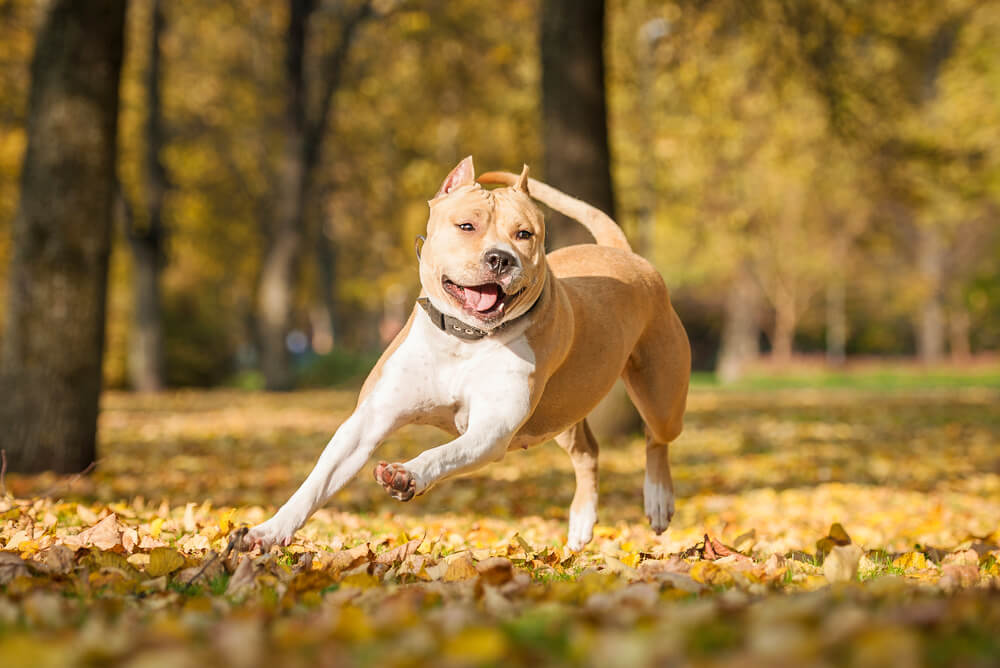 The American Staffy (sometimes referred to as Amstaff) is a relative of the English variety, but with several noticeable differences, the main ones being that the Amstaff is much larger and heavier than the English Staffy.18

Amstaffs weren’t bred to be fighting dogs, but unfortunately, that is what they were used for until dog fighting was banned in the United States.19 However, they aren’t natural fighting dogs; they were originally bred to be companions and working farm dogs, and still maintain those traits today.

They are strong, active dogs that need a lot of exercise with a capable owner, but when welcomed into the family make for devoted, loving pets. As for the breed’s health, Amstaffs can be susceptible to hip dysplasia, cardiac disease and elbow problems. 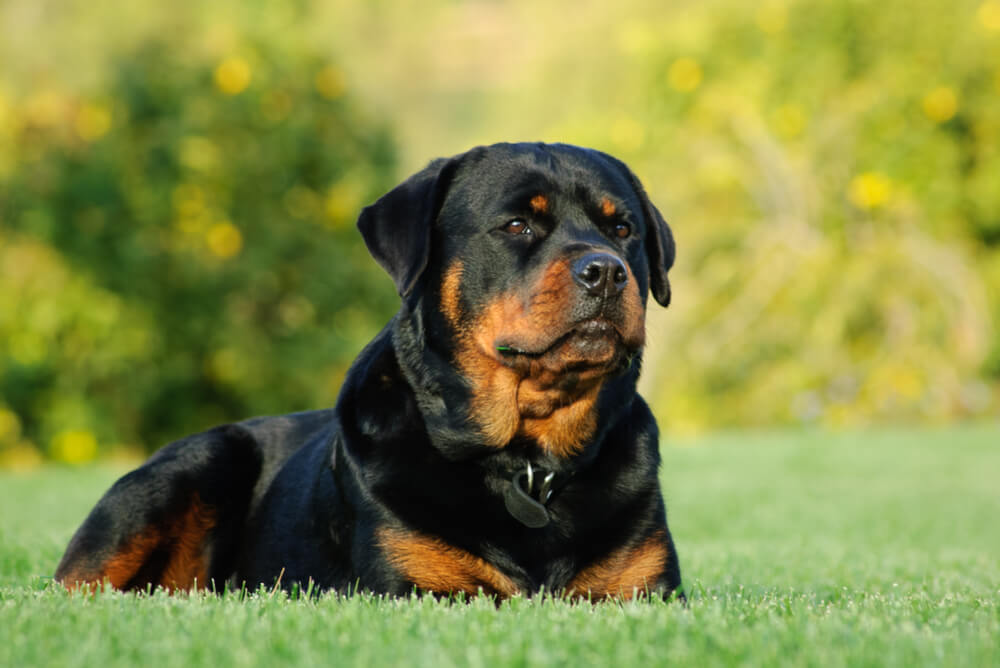 Rottweilers, or Rotties, may well be one of the oldest dog breeds in the world, dating back to Roman times when they were used to drive cattle.20 Mixing with the native dog of Rottweil, a town in Germany, produced the Rottweiler breed we know today. Rotties can be medium to large-sized dogs and are distinguished by their black coat with tan markings.

Rotties are among the strongest dog breeds and so need plenty of exercise.21 Because of their natural guarding instinct, Rotties can be dominating if not appropriately raised by a firm and responsible owner. Still, they are entirely devoted to their families and will protect them at all costs.

Rotties can be susceptible to hip problems, and can also suffer from bloat, so it’s important that they’re fed properly in accordance with the breeder’s advice. 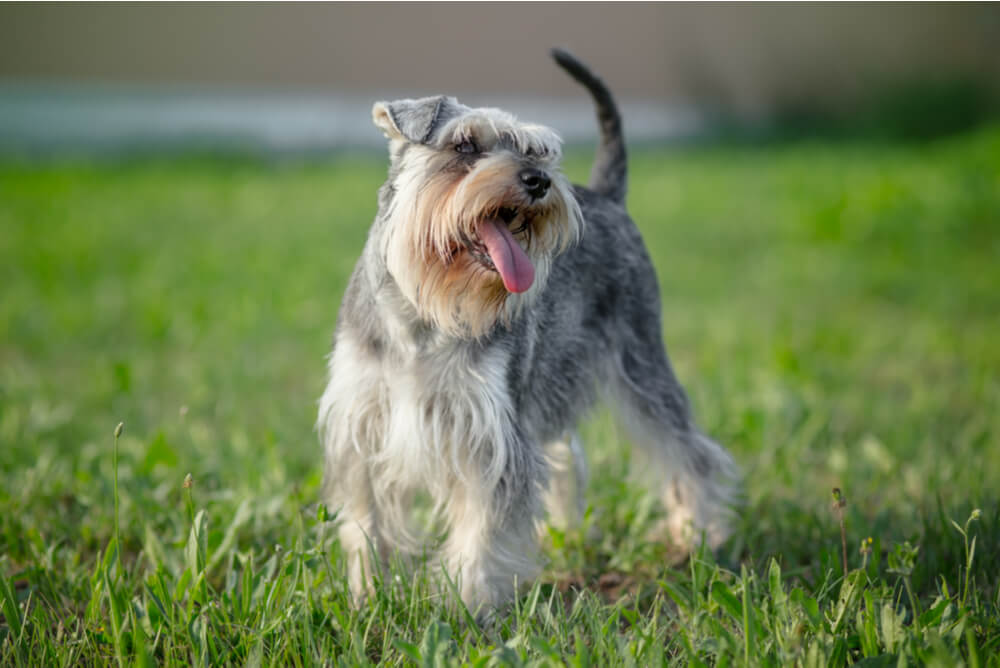 There are three types of Schnauzer (miniature, standard and giant), each of which looks the same but just in different sizes.22 You can quickly identify a Schnauzer for their beards and eyebrows, giving the breed quite a distinctive look.

Despite being a small dog breed, Mini Schnauzers are quite sturdy and robust, with a square body shape. They’re intelligent with an instinct to guard, as they were originally bred as guard dogs, but are now mainly a companion dog. Minis are also pretty healthy dogs, with only a few conditions known to occur in the breed.23

What are the smartest dog breeds?

While not always a completely accurate practice, a dog’s intelligence is usually measured by things like their memory, ability to comprehend words and how receptive they are to training.24 Some of the smartest dog breeds out there include:

Which dog breeds are hypoallergenic?

Allergies to dogs are caused by dander that clings to fur, not actually the fur itself, so there’s no dog breed that is completely hypoallergenic.25 However, some breeds are better for dog allergies than others, including:

If you or a member of your family is allergic to dogs but are still looking to bring a furry friend into your home, you can reduce the risk of allergies by regularly washing your curtains and drapes, vacuuming your carpet and grooming and washing your dog.25

What dog breeds get along with cats?

If you want to expand your furry family to include a cat, you may be wondering if certain breeds are friendlier towards their traditional enemy than others. Some dog breeds that get along with cats include: 26

Which dog breeds bark the least?

You won’t find a dog breed that doesn’t bark at all, but some are naturally quieter than their fellow canines, including:27

What dog breeds are banned in Australia?

The states and territories may have different legislation on the ownership of these restricted breeds. For example, in NSW it is illegal to sell or give away these dogs and to receive one,29 and in Victoria, you can sell or otherwise transfer ownership of a dangerous dog provided you advise the new owner in writing that the dog is classified as dangerous.30

Should I insure my dog?

Getting pet insurance for your beloved dog is a great way to help protect against the potential financial burden if your dog has an accident or illness. If something were to go wrong – say your dog had an accident and injured their leg, or ate something not meant for dogs and got sick – pet insurance can help cover the cost of vet bills, allowing you to focus on getting your furry friend back to health.

Pet insurance can also come in handy if your dog is a breed that’s prone to certain health problems, as are some of those we talked about above. However, it’s a good idea to insure your pet early in their life or before they show symptoms of these problems, as pre-existing conditions often aren’t covered by pet insurance.

You don’t have to spend hours crawling all over the internet looking at different pet insurance policies and weighing up each of them in your head; our pet insurance comparison service can do all that for you with just a few clicks of your mouse!

All you need to do is enter a few details about yourself and your pet, and our comparison service will show you a range of pet insurance policies side-by-side, so you can easily review their details and features.

And we do it all for free. Simples!