Is solar power suited to your home?

That big ol’ ball of gas in the sky is useful for more than just giving you some sweet tan lines – it’s also an excellent source of energy. Significantly better for the environment than conventional sources of electricity, solar power has steadily become a more feasible option for conscientious energy customers across Australia.

As solar panel prices continue to drop in line with uptake in demand and advances in technology, there are many things you should consider before deciding whether to make the switch to solar power.

Read on to discover how it all works and what you need to make the transition.

First of all: What is solar energy?

Solar energy is created by the heat and light emitted by the sun.1 We can harness this energy and convert it to electricity, use it to heat water or air and even create solar fuels (like hydrogen); doing any of these produces solar power.

How does solar power work?

Solar power systems harness energy from the sun and convert it into electricity. There are two primary solar energy technologies used in Australia:2

Solar thermal: Takes sunlight and turns it into thermal energy, used for heating or producing electricity via steam and turbines. This type of energy generation is typically reserved for large-scale systems. 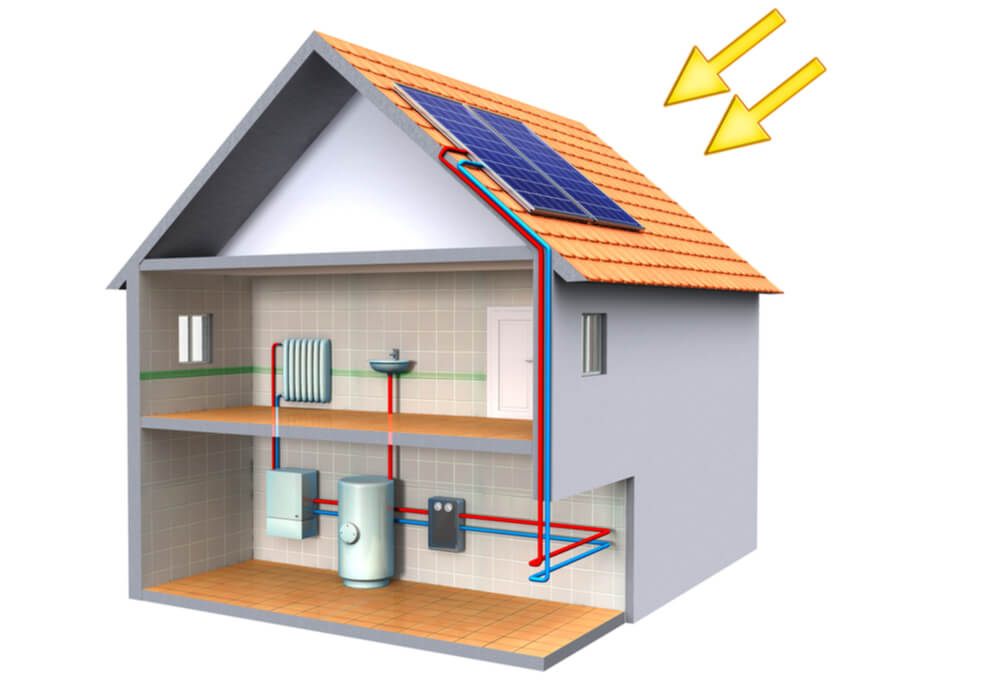 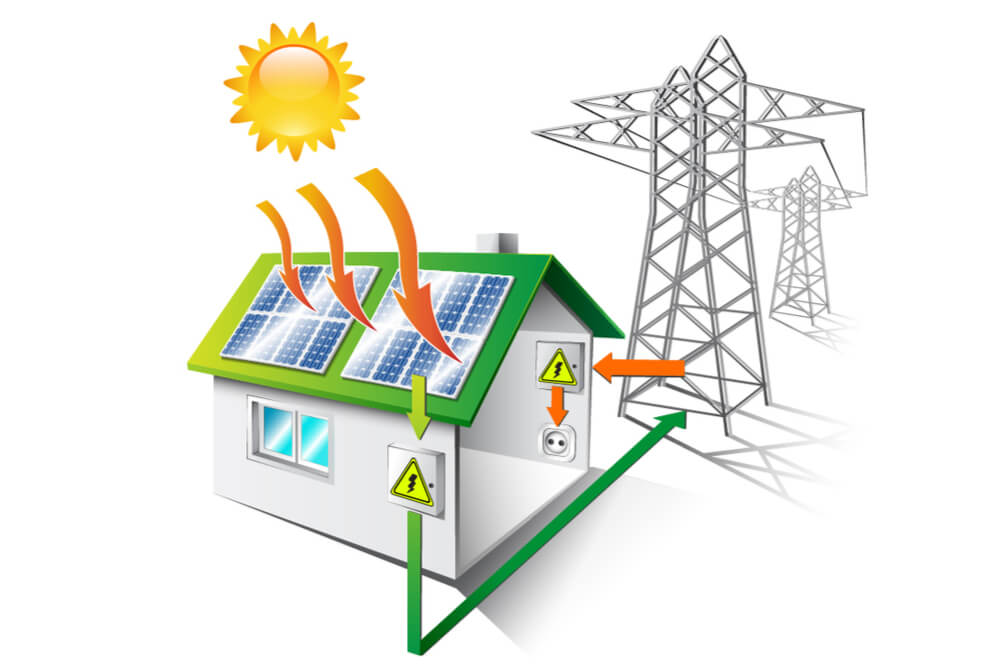 Naturally, the effectiveness of these technologies is entirely dependent on the weather. However, as you probably know all too well, that isn’t too much of an issue in Australia.

While climates do vary between regions, by and large, the country is a fairly sunny place. In fact, Australia receives enough solar radiation per year to power the entire country 10,000 times over, according to figures collated by Geoscience Australia.2

There are three main types of solar power systems available in Australia:

Components of a solar power system

It’s all well and good to understand how solar power works and how it becomes electricity, but you should also understand a system’s makeup. We’ve outlined some of the main components of a solar power system below.

How common is solar energy in Australia?

Australians are slowly warming to the idea of solar energy. As of December 2020, around 2.6 million households in Australia have been equipped with rooftop solar PV installations.3 All these PV systems have a combined capacity of more than 18.5 gigawatts (GW)4 To put that into perspective, it’s enough to power around 5.5 million Australian homes at once.

As renewable energy continues to play an important role in Australia’s electricity production, Australians are moving to take charge of their utility bills and save cash in the long run with solar. That means that many are happy to pay the (sometimes) significant upfront costs to install panels in their home.

Regardless of the costs involved, it seems many Australians believe that solar power is the way of the future, since Australia currently has the highest uptake of solar power in the world.3

It appears as though the future may be powered by the sun, but what exactly are the benefits of solar energy, and how might they impact you as an electricity customer?

The benefits of solar energy

It goes without saying that solar energy is substantially better for the environment than conventional sources of electricity. Reducing greenhouse gas emissions and minimising fossil fuel dependency are critical targets for Australia and countries around the world, and solar and other renewable sources will likely play a key role in meeting these objectives.

A cleaner, greener environment is better for everyone, but perhaps more noticeable – at least in the short term – is the impact moving to solar energy will have on your power bill. In fact, solar power customers could recoup the initial up-front costs of PV systems (without batteries) within three to five years.3

Considering that such systems have a 20-30-year life expectancy,5 generating your own electricity could mean you enjoy reduced electricity bills for 15-17 years. Of course, you’re still required to pay supply charges for being on the grid and need to pay for panel servicing and maintenance. Before switching electricity providers or moving to solar energy, be sure to weigh up the costs involved to identify which option is best suited to your specific household.

Am I eligible for a solar energy rebate?

In addition to saving the planet and improving your power bill, you could be entitled to a government rebate for your solar system. The Small-scale Renewable Energy Scheme (SRES) can help you with the purchase price of your solar power system by awarding you with Small-scale Technology Certificates (STCs). The number of STCs you may be eligible for is based on the amount of solar electricity your system produces (or how much energy consumption it reduces) and the climate in which you live. You can then redeem your STCs by selling or assigning them.6

Some state and territory governments also offer solar rebates or incentives. Information below is current as of March 2021. Read more about rebates and concessions in your state or territory.

What is a solar feed-in tariff?

The other type of solar FIT is gross, which pays for all the electricity generated by your system, as it’s intended to bypass your home entirely and feed straight back into the grid. Gross solar FITs aren’t generally offered to new customers anymore.

Solar FITs are also different between states and territories, and different again between energy providers within those states. Ask your existing provider for more information.

How do I choose a solar power system?

Solar power systems are large, intricate, expensive products. It’s therefore vital you choose the right system for your needs. Here are some things you should consider if you’re looking into solar energy for your home.

How much energy do you need? When you search for the right solar energy system for your home, you should first decide how much electricity you need to generate. Take a look at your current consumption and the periods during which you most use power; your energy bill would typically detail this. Such information will then influence the size and number of solar panels your property would likely need.

What can impact the cost of solar power systems? As we mentioned earlier, the price of solar energy systems (particularly the panels) has come down over the years as demand and production has increased.3 According to the Department of Industry, Science, Energy and Resources, solar PV systems cost an estimated $3,500 for basic installation,14 although this price can vary based on many factors including:
– The cost of equipment
– The value of the Australian dollar, especially if your system’s parts are imported from overseas
– Any solar rebates you’re eligible for; and
– The size of the solar panels installed.

How much could it potentially help you save? Saving on electricity bills is one reason why people turn to solar energy to power their homes. Bear in mind, though, that a solar power system can take a few years before your energy savings exceed the purchase price.

Is your home suited to solar energy? The ideal spot for solar panels is a north-facing roof or a space that isn’t near shade.13 You’ll still generate electricity with east- or west-facing panels, but with each degree away from north they face, it’ll be that little bit less.

Do you own your home? If you don’t own your home, you’ll need to get your landlord to install the solar power system. Even if your home is suited to solar energy, not all scenarios will be eligible.

How much roof space do you have? The amount of space on your roof should also be considered when choosing a solar power system. For example, you may not be able to install a system if you live in an apartment.

How do I compare solar electricity plans?

If you’re in the market, you stand a good chance at finding the best solar compatible electricity plan by doing your research, shopping around and, most importantly, comparing your options.

When comparing such electricity plans, keep an eye out for the following:

It sounds like a lot to remember, doesn’t it? Luckily, our energy comparison service can do this for you. Just enter in a few details about yourself and your property, and our service will present you with a range of energy plans to compare and choose from. Simples!