What we’re really doing when we ‘work’ from home

Working hard, or hardly working? When it comes to working from home, it seems that the latter could be true – particularly for young people.

Compare the Market hates to see people waste their time or money so set out to discover what has been going on while the world has been working from home (WFH), and the research revealed that young adults might really be the laziest working generation.

The survey recorded data from 2,522 adults across America, Canada and Australia to understand what people are really getting up to behind the webcam that their employers may not know about.

Almost one in four respondents admit they have been slacking off behind their employer’s back, either by taking longer breaks while WFH or working fewer hours in general.

The most common distractions

Almost one in three (30.8%) of all respondents in both Australia and America admit to sleeping while they are supposed to be working. A similar number of Canadians (29.3%) admit to watching television or other non-work-related content.

Australians seem to enjoy running some quick errands, as 22.6% confessed to leaving the house entirely, compared to just 16.9% of those in Canada and 15.7% in America. Meanwhile, North Americans might have a heightened appreciation for alcohol with 15.3% of Canadians and 13.7% of Americans revealing they have had a drink on the job. The figure was slightly lower in Australia at 13.3%.

Other popular activities included drug use, sexual activity, and working from inappropriate locations. 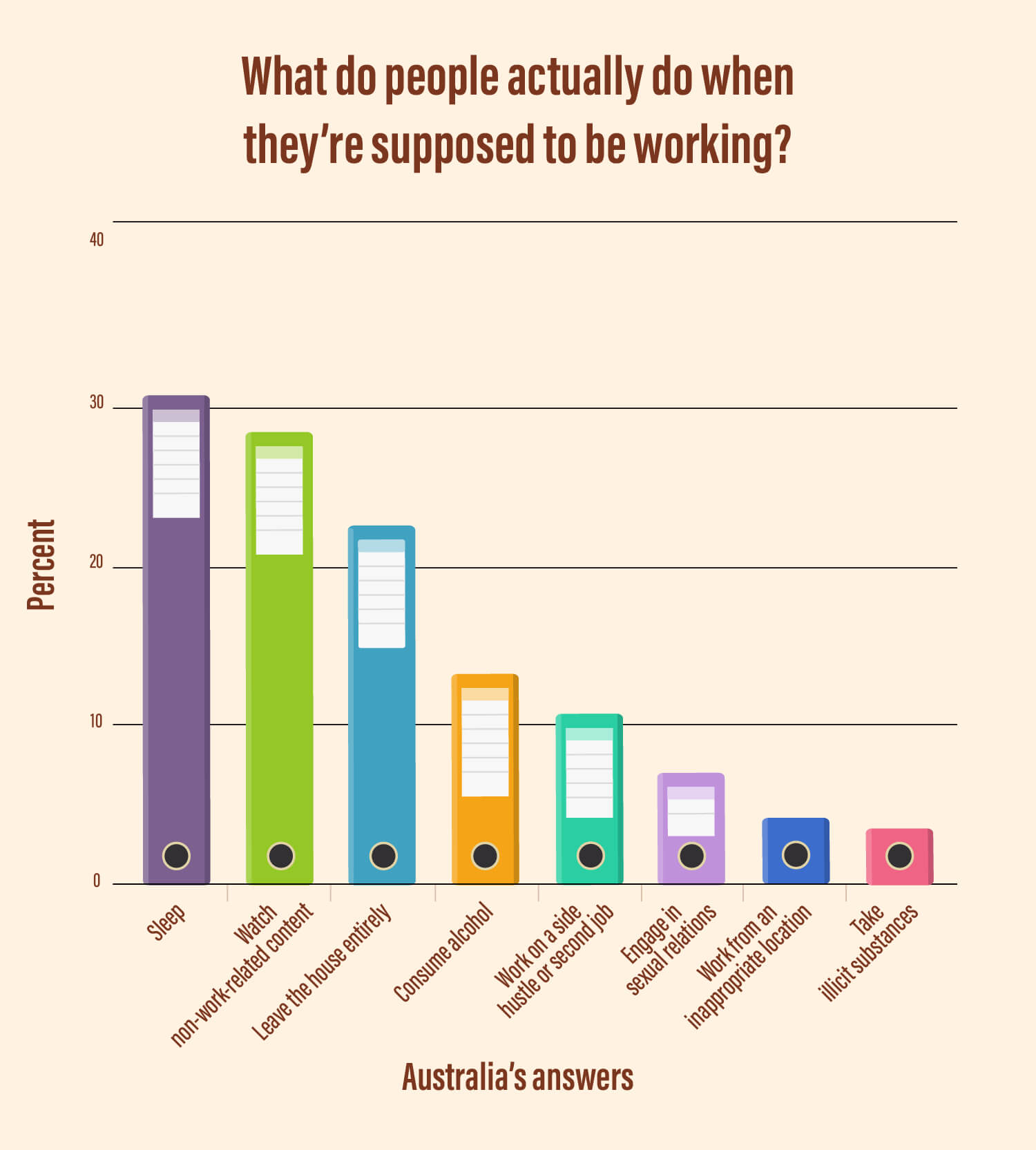 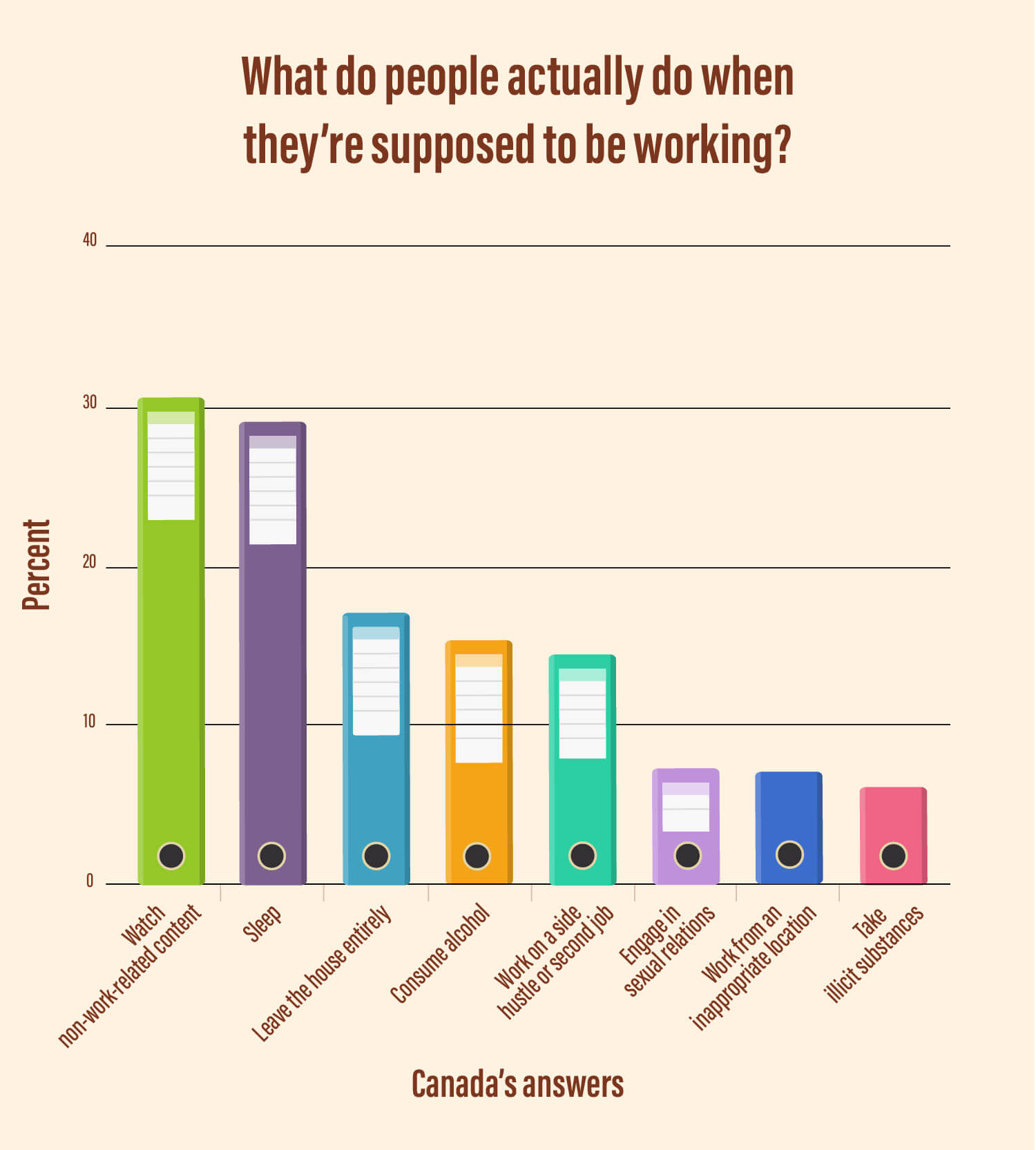 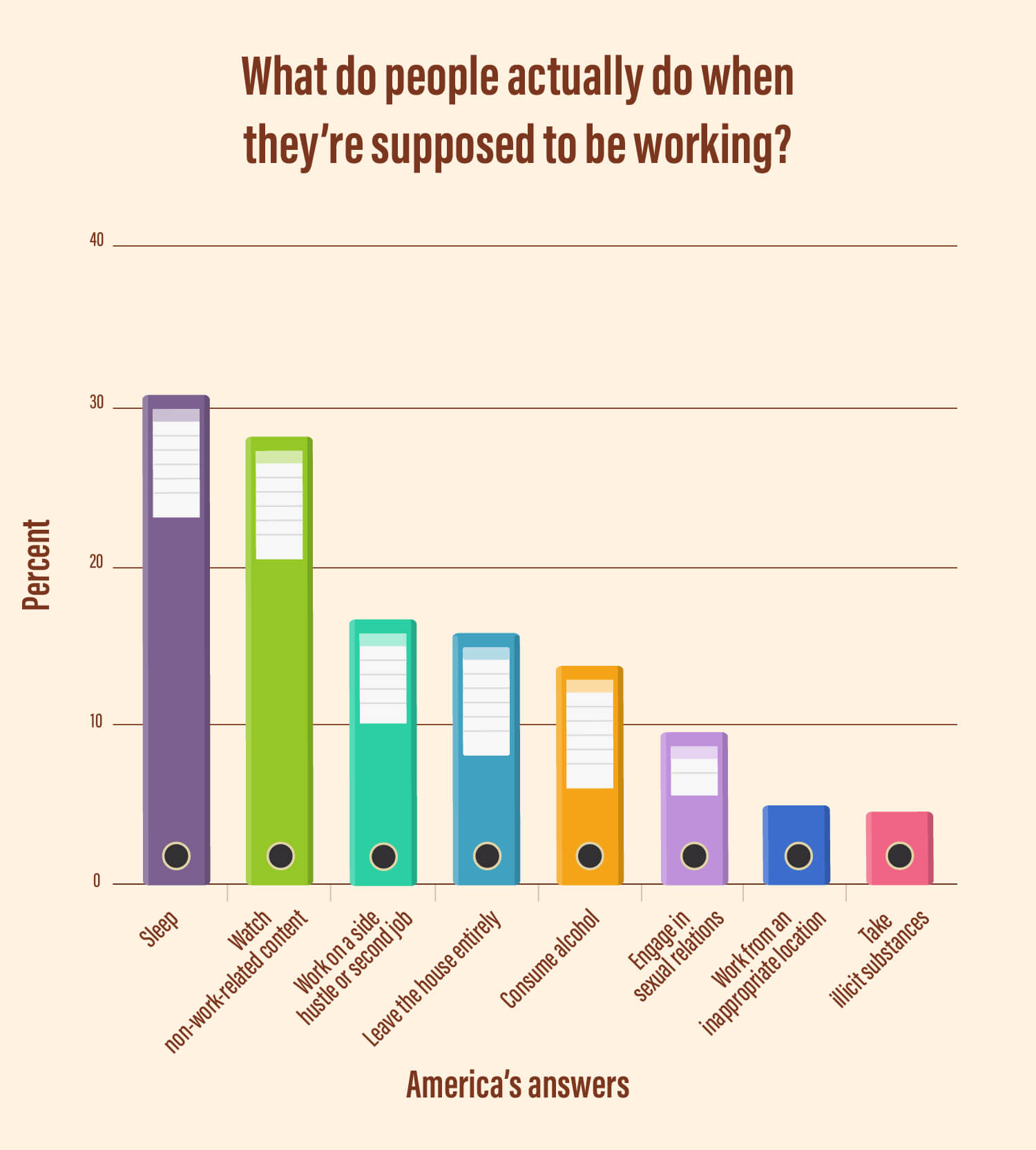 People aged 18 – 34 were the biggest offenders. In America, the younger generation was more than twice as likely to work fewer hours in a day without their employer’s knowledge, compared to any other age group. Meanwhile, in Canada, a whopping 60.4% of those aged 18-24 admitted to either taking longer breaks, starting later or clocking off early. Australian 25-34-year-olds were the most likely to be flexible with working hours in general, whether it be extending or shortening lunch breaks.

Americans aged 25-34 are also the most likely to engage in non-work-related activities. The biggest distractions for young adults in the States while on the clock are sleeping (48.9%), watching television (33.7%), working on side hustles (29.2%) and consuming alcohol (24.2%). The order of activities was quite similar for both Canadian and Australian young adults.

In Australia, men were much more likely to admit to bad behaviour, including alcohol, drugs or sexual pleasure while WFH than those who identified as female. The difference was so stark that in each case, they were between three to eight times more likely to have done each activity.

In the US, however, females were more likely than males to work in alternative locations, such as their bed, at a friend’s house, or outdoors. Where 62.3% of males indicated always working at their typical workspace, only 49.9% of females said the same.

In contrast, a much higher number of Canadian men take shorter breaks or work longer hours (22.0%) than females (13.4%).

Who’s taking advantage of the clock?

When it comes to WFH, it can be easy for employees to lie about how much work they are doing behind the camera. In each of the three countries, a decent 31-38% of respondents indicated that they always work their typical hours. Of those remaining, Canada had the highest number of slack workers, with 15.9% admitting to taking longer breaks and a further 8.8% saying they regularly start late or clock off early.

The numbers are similar for overworking in Australia – 12.1% have taken shorter breaks, and a further 9.9% have worked longer hours by clocking off late or starting earlier than usual. 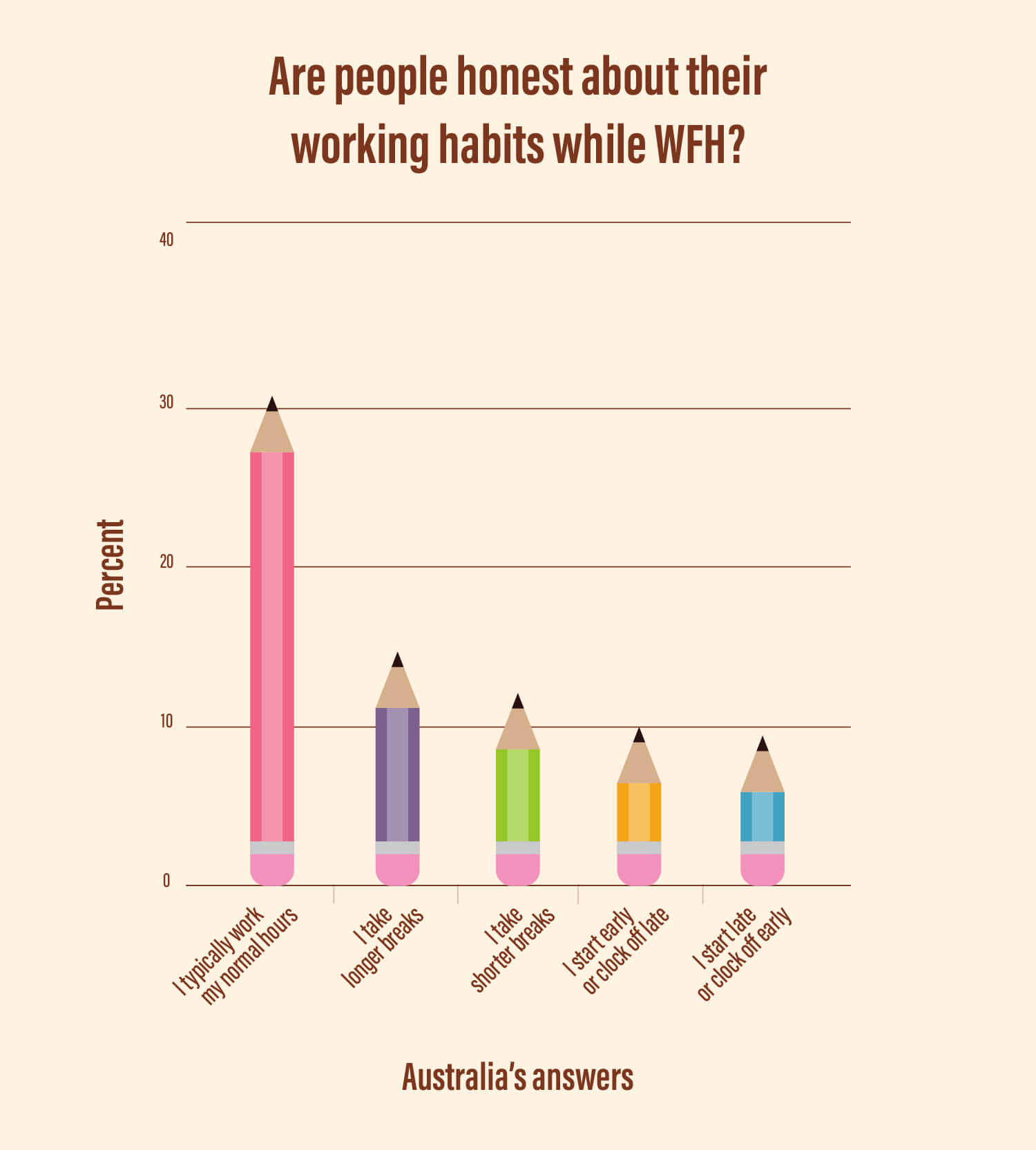 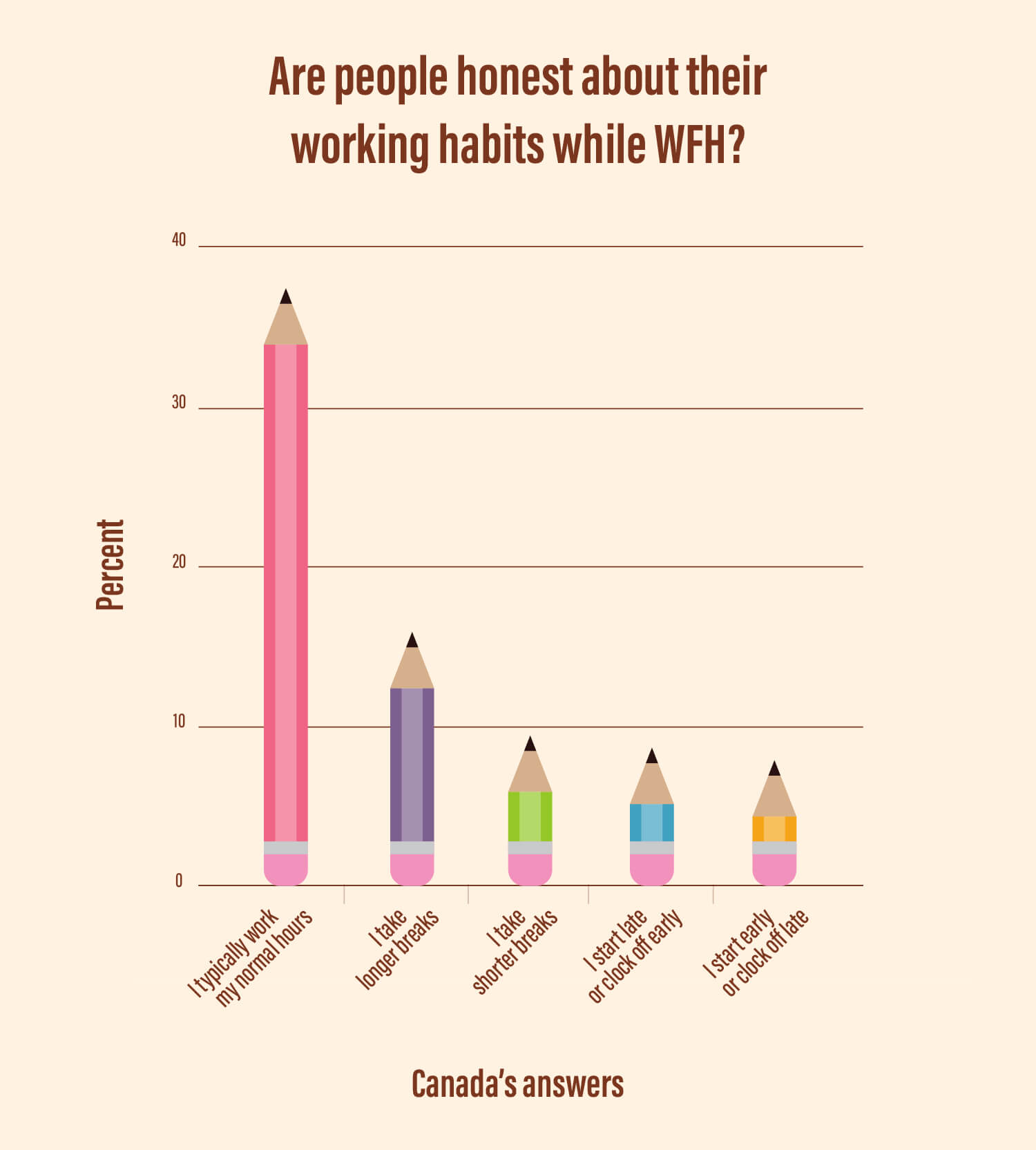 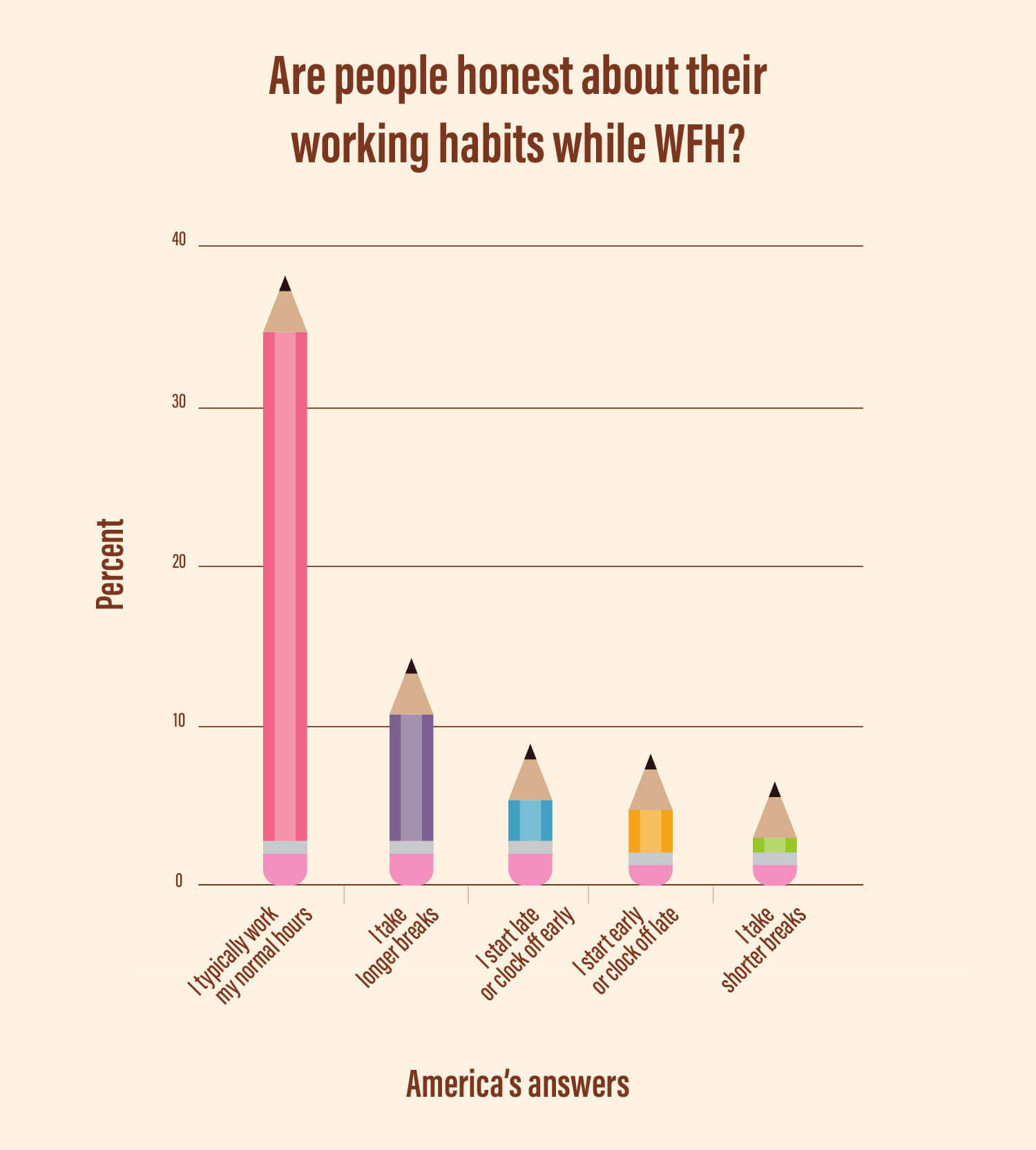 The most popular WFH locations

While around 60% of those surveyed confirm they have one or more appropriate workspaces around their home, it seems that less-than-appropriate locations are also frequently used. In fact, nearly 35% of all respondents admitted they have worked somewhere other than their typical workspace.

The most common alternative location is the bed, which is the most popular ‘office’ for those in all three countries. As many as 29.1% of Canadians, 29.6% of Americans and 23.4% of Australians admitted to it being their favoured alternative workspace.

The bedroom is followed closely by the outdoors, where 14-17% of respondents admitted to frequently working.

Americans enjoy working in coffee shops more than any other country, with a handful of respondents indicating it was their preferred location.

Other popular workspaces include friend or family member’s houses, the bathroom and hotels or other accommodation. 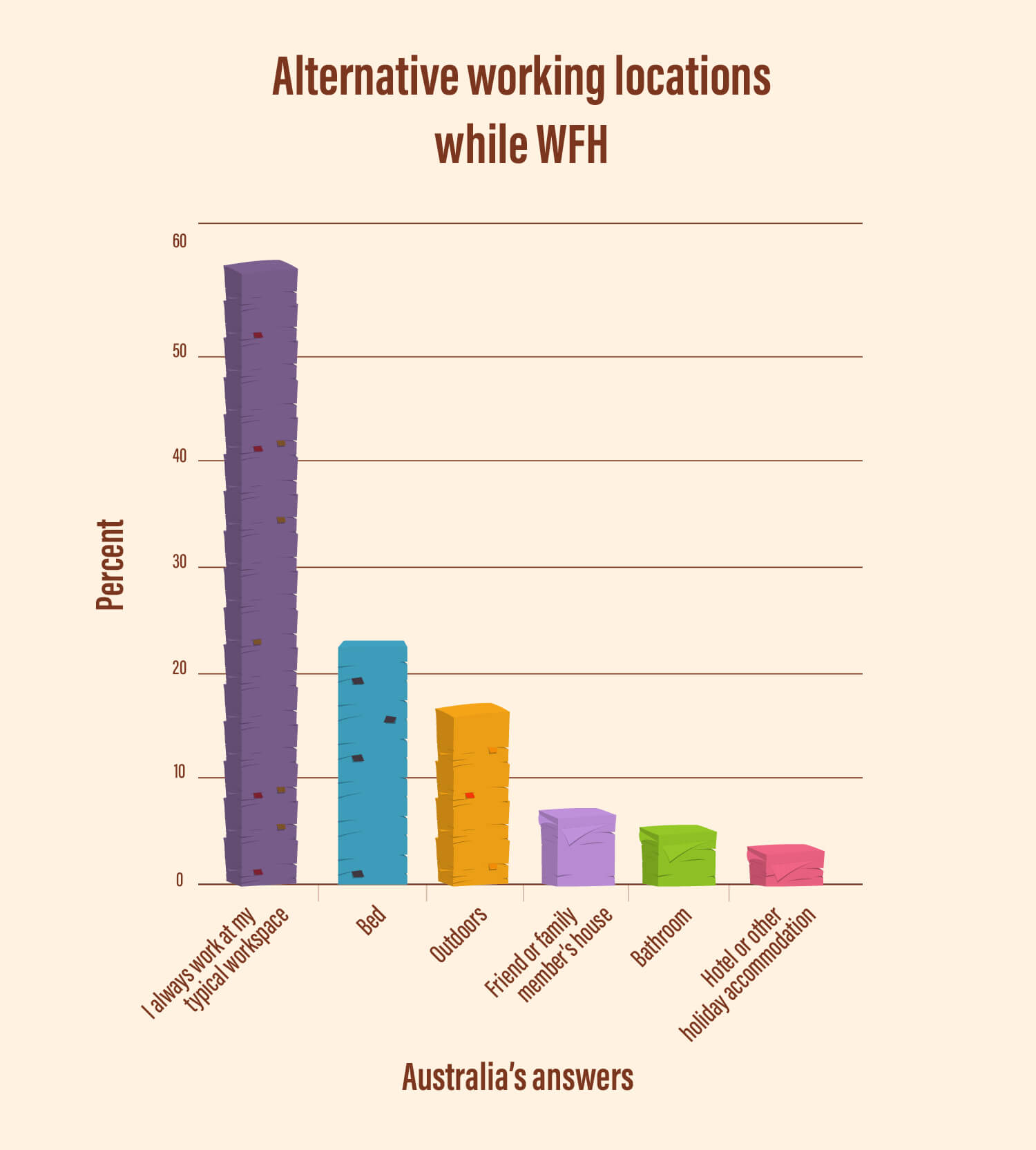 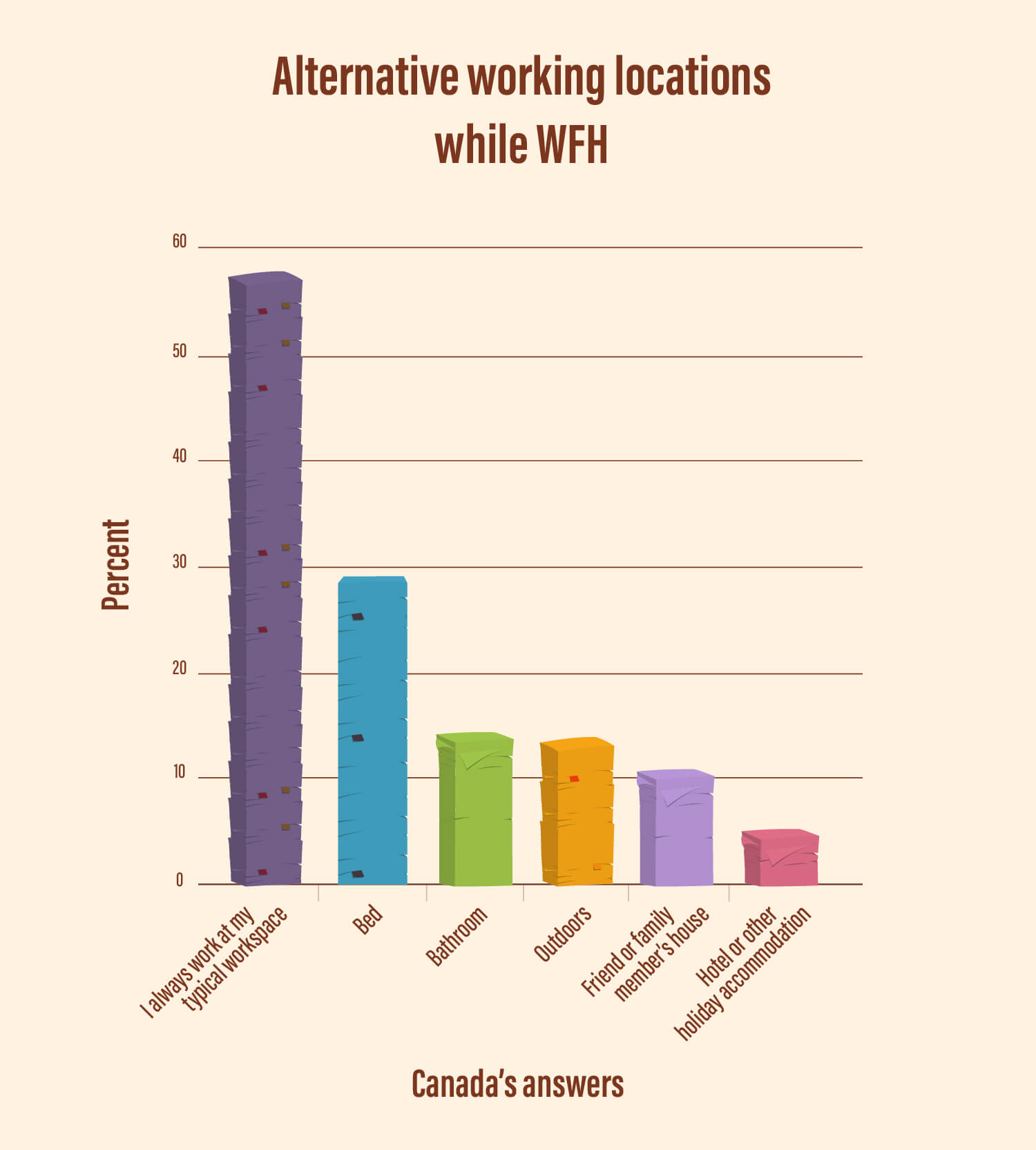 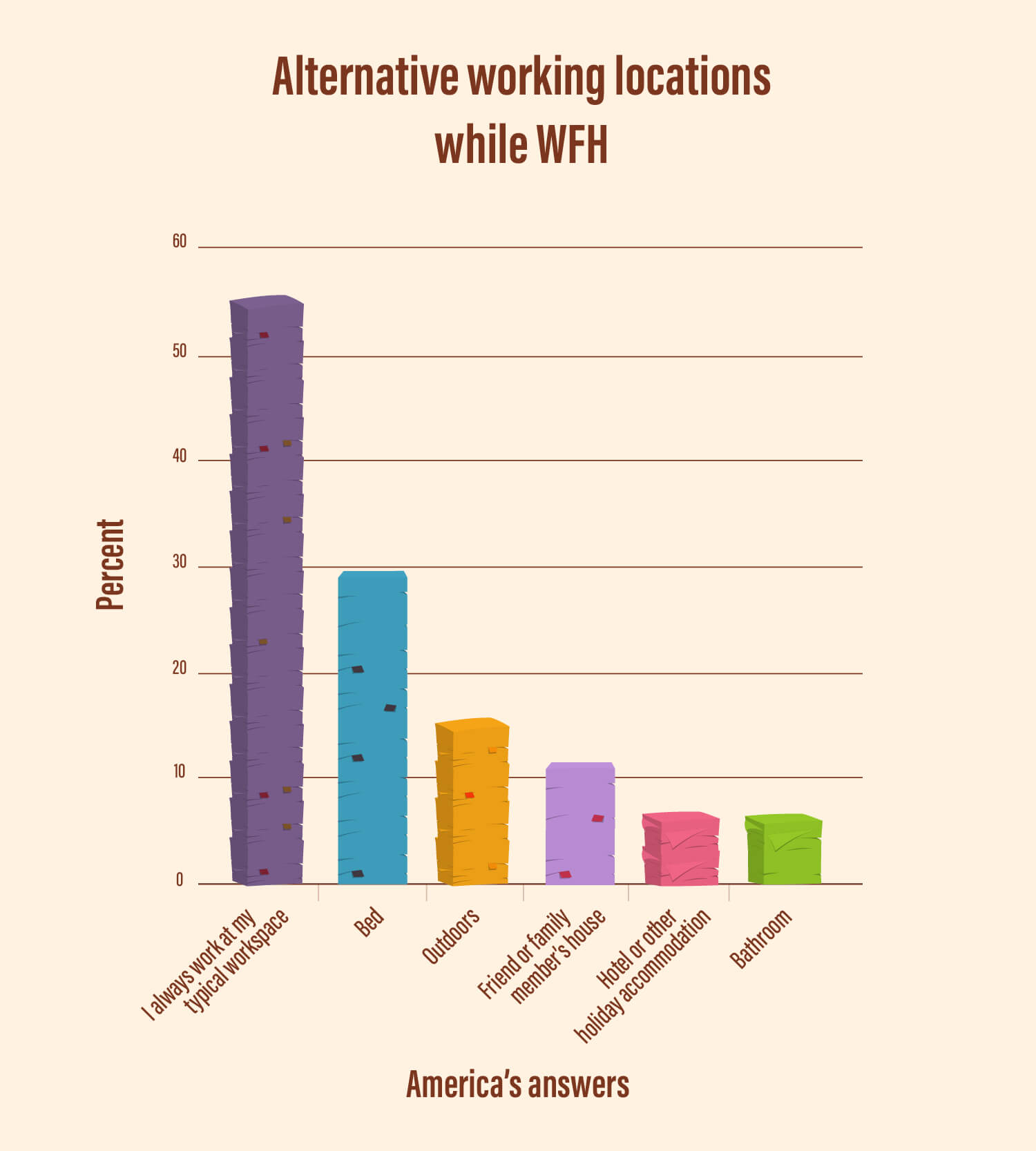 Staying focused while away from the office

Compare the Market spokesperson, Hannah Norton, talks about the importance of staying focused while working from home.

“It’s tempting to indulge in distractions at home. That’s why it is important to set some ground rules to keep you focused on what you should be doing,” Ms Norton said.

“Not only is it disrespectful, sleeping or consuming alcohol while you are supposed to be working can put your job at risk.

“We’ve seen people resigning from their jobs in droves over the past year, which indicates just how big of an impact the pandemic has had on people’s state of mind around the world.

“If you find that you are not enjoying your job enough to stay focused throughout your day, it may be time to look elsewhere for a position in which you can work more efficiently.”