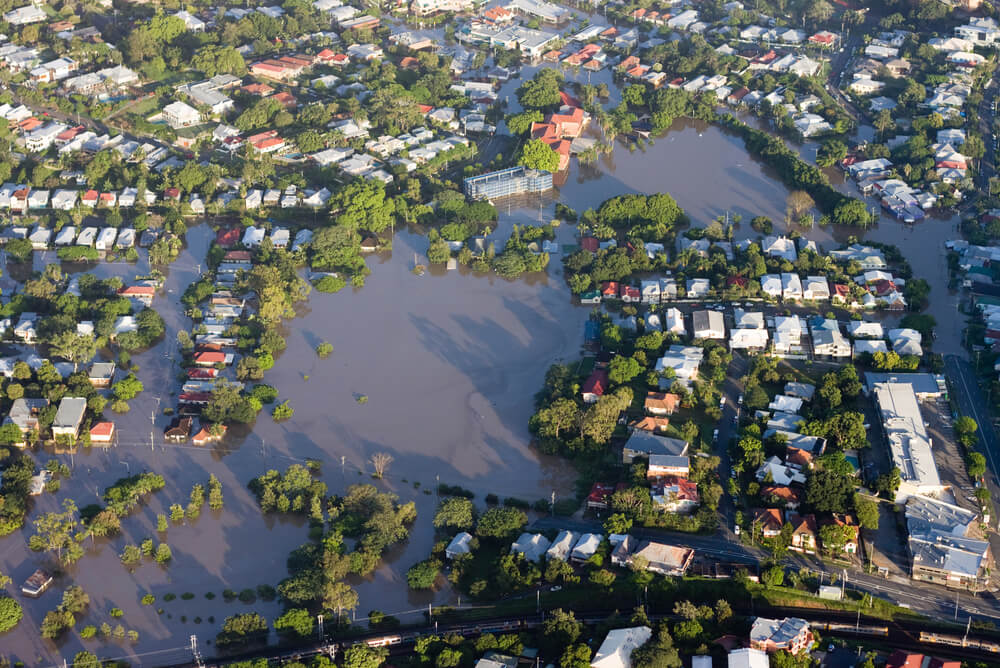 With all the focus on climate change and the now locked-in effects, we’re set to see, the Australian property market is unlikely to escape unscathed.

The latest Intergovernmental Panel on Climate Change (IPCC) report found, among its hundreds of pages, that Australia is set to endure among the worst effects of climate change, including longer and hotter summers, more bushfires and coastal erosion from rising sea levels, just to name a few.1

Australia’s property market is now worth more than $9 trillion, several times greater than our country’s entire GDP.2 3 But with a good chunk of that $9 trillion exposed to the effects of climate change, the Climate Council predicts as much as $571 billion in value will be wiped out by 2030 alone.4

According to a Reserve Bank (RBA) research paper, about 3.5% of Australian properties are currently considered to be at ‘high risk’ from climate change.5 To come to this conclusion, the RBA used an indicator called the ‘Value at Risk’ (VaR) – the VaR measures the expected annual cost of climate change-related damage relative to the replacement cost of the property. It essentially measures insurance premiums.

A property is deemed to be ‘high-risk’ if the VaR exceeds 1%. With 3.5% of Australian properties above this threshold, it is expected to increase to 8% by the year 2100.

In terms of price decreases, the RBA predicts about 1.5% of Australian properties will experience a fall in value of 10% or more due to climate risk by 2050, increasing to 9% by the year 2100.

“However, there are some properties that could see very large price falls,” the reports’ authors Kellie Bellrose, David Norman and Michelle Royters said.

“These risks could emerge more rapidly if buyers start to recognise the increasing risk of climate change and factor this into current property prices (by discounting prices more heavily than the actuarial fair amount) ahead of climate change impacts being fully realised.”

They also noted that price impacts could be greater than this if climate risks aren’t yet fully reflected in property prices.

“Climate change creates risks for the Australian financial system that will rise over time to become substantial if they are not properly managed,” they said.

“If current values do not fully reflect the longer-term risks of climate change, housing prices could decline, leaving banks with less protection than expected against borrower default.”

What areas will be the most affected?

These declines will be concentrated in certain areas, mostly agricultural or coastal regions.

“The regions with the largest rise in the proportion of properties that are projected to be high risk continue to include some populous regions in south-eastern Queensland and northern New South Wales, which have a large number of houses at risk of coastal inundation,” the report said.

“The risks in these regions could further increase if the affected communities find that access to, or affordability of, insurance becomes a challenge.” 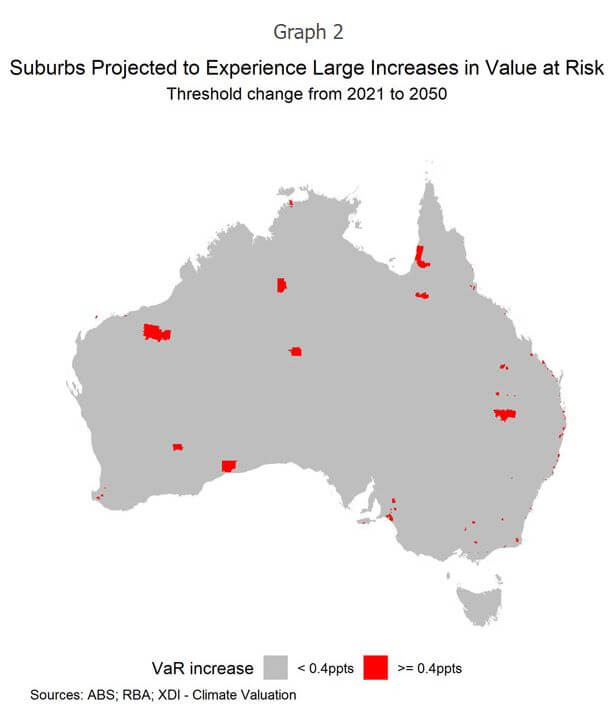 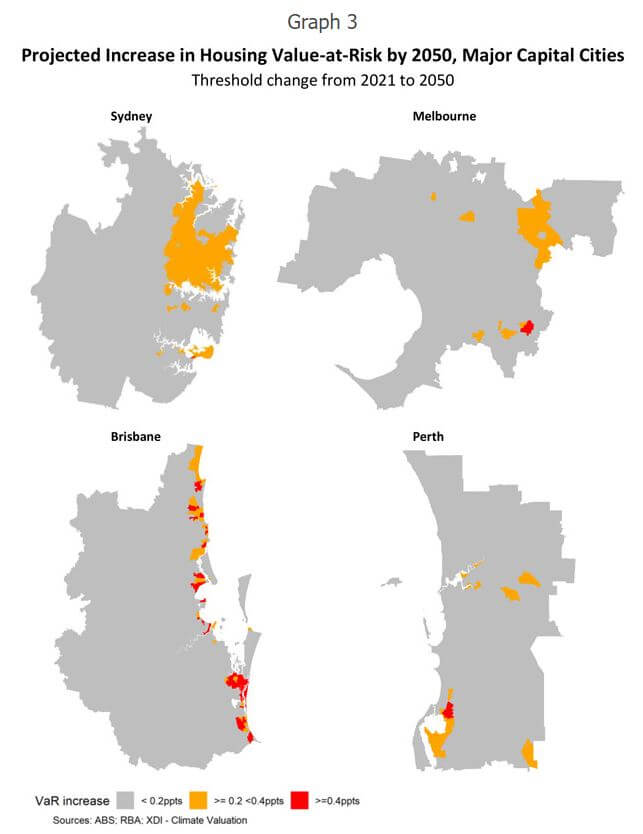 How have property prices been affected by previous disasters?

Australia is no stranger to natural disasters, with the 2019/20 Summer bushfires coming to mind. Other large weather events in recent memory include the Brisbane floods of 2011 and Cyclones Yasi and Debbie in North Queensland.

While these events were devastating in the short term, CoreLogic analysis found that in the long term, there hadn’t been much of an impact on housing values.6

According to CoreLogic Research Director Tim Lawless, most of these natural disasters occurred in low-population areas.

“Housing values in the worst affected areas of the Brisbane floods saw only relatively minor declines following the event and were fully recovered within the space of a few years,” he said.

“The worst affected areas of Northern Queensland following Cyclone Yasi and Cyclone Debbie saw a mild fall in housing values, but these impacted postcodes actually recorded a higher rate of house price growth over the three years following the cyclone than the regional Queensland average.”

But climate change as we now know it is a whole new beast, and CoreLogic acknowledged that values could be more widely impacted if weather events occur more often.

“It’s reasonable to assume the impact on housing values could be more substantial if weather-related events became more frequent or impactful, or if insurance costs rose substantially creating an additional disincentive to purchase in an area that might be higher risk.” 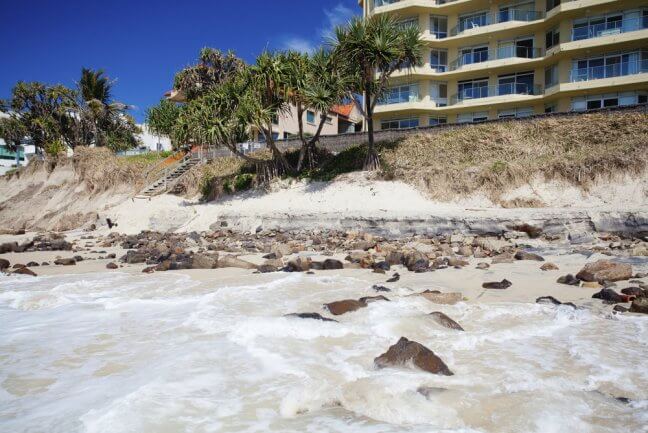 Coastal erosion from rising sea levels is one factor that could further influence prices.

Insurance premiums will rise too

Much of the expected changes in property values have been modelled off changes in potential insurance premiums. For people who live in climate change impacted areas, the cost of their home, contents and landlord insurance will get significantly higher.

According to the Climate Council, one in 19 properties in 2030 could face ‘unaffordable’ insurance premiums, defined as more than 1% of the home’s value each year.

“Even for Australians who can afford to pay, general insurance currently does not cover damage from coastal inundation and erosion: events which are likely to become more common because of climate change,” climate risk expert Dr Karl Mallon said of these findings.

That’s nearly one million homes by 2100, with about 5-6% of them bearing the brunt of the cost in the most heavily affected areas.

Queenslanders will be the hardest hit, with more than 52% of LGAs (local government areas) set to experience ‘unaffordable’ insurance premiums within the next decade.

This is in line with what we’re already seeing; premiums in Northern Australia are nearly four times the national average:7

How might climate change affect how you get a home loan?

Lenders already factor the location of properties and the type of property into their risk assessment practices when deciding whether or not to approve a loan.

A lender might not approve loans for properties in certain suburbs, for example, whether it’s due to crime rates, lots of infrastructure developments nearby or because of other risks.

Higher exposure to adverse weather and higher insurance premiums could make a customer a higher risk to a lender, potentially leading to higher interest rates, higher fees and even rejection altogether.

“When considering lending for mortgages, banks look carefully at the annual costs of the borrower, including the cost of insurance. Therefore, banks in principle will have to lend less for houses with higher insurance costs,” the Climate Council said.

If you want to avoid this potential problem when buying your next home, you can check out a free – or paid – report from sites like Climate Valuation to see how climate change might impact that property in the next several decades.