Grocery shopping, that staple of Australian household budgets, has become even more important since the pandemic lockdowns of 2020 began.

Credit card data from Commonwealth Bank1, which represents a significant portion of card spending, shows that in the 12 months to February 2021, spending at grocery stores and supermarkets across the country increased by a significant 17%.

At an average weekly spend of $255 per household on groceries3, there might not be a person reading this who doesn’t take a trip down to their nearest supermarket to buy their essentials.

With shopping for groceries near the top of most people’s expenses, it makes sense to try and save as much as possible to buy the things we truly need. But the supermarket chains aren’t likely to see it that way!

Supermarkets and grocers are businesses after all, and given some of our biggest such as Coles and Woolworths are worth billions, they are always trying to make more money out of their customers.

“Most of the tips for saving money on groceries you might have heard before are things like ‘don’t shop while you’re hungry’ or ‘make a list and stick to it’, and even though these are good ideas, they’re child’s play compared to how much you might be spending purely due to subconscious supermarket tricks,” Compare the Market Spokesperson Simon Downes said.

“While it might not look like it, almost everything in the local grocery store has been carefully designed and planned out to get shoppers to spend as much as possible in any given visit, and they’ve perfected some of these tactics so well that roughly 20% of purchases are unplanned4.”

Here are some of the top tricks and tactics your local shop could employ to get you to spend more. Click the links to jump to each one:

The sales before the aisles

Perhaps the most obvious ‘trick’ in this list, stores will place lucrative-looking deals at the beginning and end of each aisle to entice customers to snap them up.

These promotions are big business, and companies often pay large sums of money to supermarket chains to place their products in these key positions, because they clearly work. A 2015 study in Europe5 found that more than half of all goods (54.6%) sold to UK shoppers in supermarkets and major retailers were on promotions such as these.

Things like ‘2 for 1’ or ‘50% off’ are common for these sales, and even though they might be good value, both the store and the manufacturer are betting that you’ll buy that item even though you may not need it.

If you buy something you don’t need, then you aren’t saving money, you’re spending extra. And that makes you the supermarket’s favourite type of customer…

The sales at checkout

Most supermarkets and stores these days offer a host of treats at the checkout: chocolate, lollies, magazines, drinks, and even medicine can be bought right before your items are bagged at a low price.

This is a great way to entice people to buy a chocolate or two they weren’t planning on buying, especially if they’ve got children with them demanding some.

These ‘impulse buys’ are extremely common, as around 77% of shoppers (US)6 said they’ve done this at least once in any three-month period. Shoppers also tend to have less self-control at this point as they’ve already committed to spending money, so one more minor purchase won’t hurt…

The essentials at the back

Let’s face it, you probably didn’t come to the shops to buy lollies or Coke, you went there to get actual food you need for the week, like milk, bread, eggs, butter etc.

Supermarkets know this, which is why these items are almost always at the back of the store, or at the very least not near the front.

The reason for this is simple: customers are more likely to put more things in their cart on the way to buying their essentials, and the further they have to walk, the more they add.

There are countless studies that show why businesses do this, but you probably don’t need to read a peer-reviewed paper to know that an extra 20 meters or so would give you plenty of time to ogle the super low prices on sweets while you’re stuck behind a particularly slow walker. 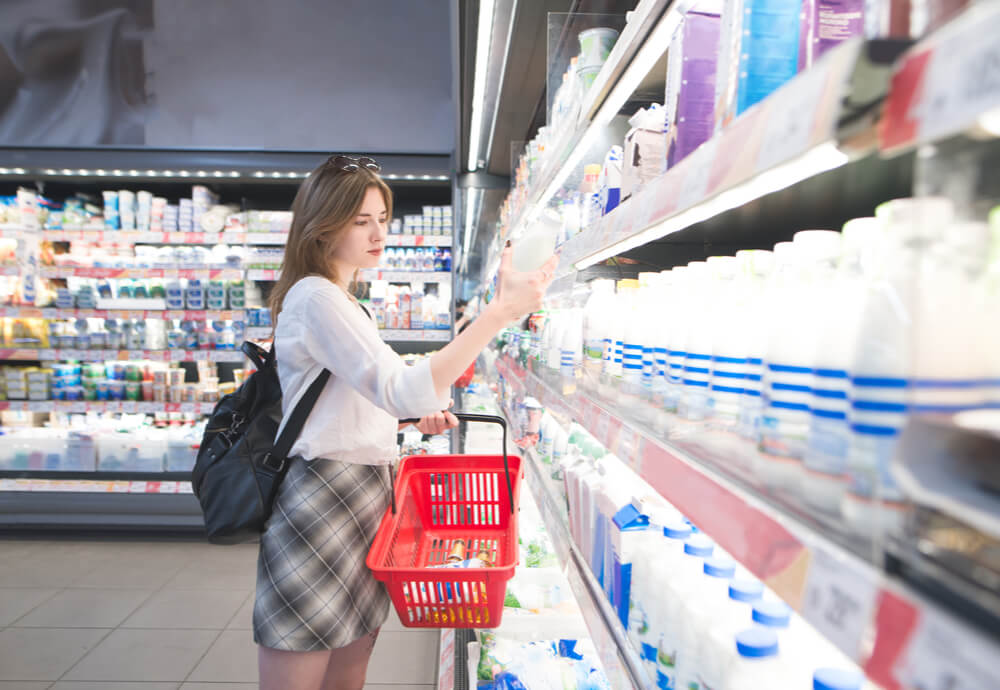 The general layout of the store

The entire layout of major stores has been meticulously put together to manipulate your brain. Yay!

For starters, a common layout in Australia with the major chains is to assault your senses when you walk in. On the left, you might have a delicious smelling bakery with coffee and hot chickens, on the right your fresh fruits and vegetables.

These two things can trigger common responses. Fresh bread, for example, makes you feel hungry, while fruit, veg and flowers by the entrance not only give a more positive impression to newcomers, but are also likely to make shoppers feel less guilty about buying unhealthy food later on. Genius!

“Produce is placed first in your path not to encourage you to buy more of it, but to make you feel super healthy,” Dietitian Christy Brissette wrote in The Washington Post in 20187.

“Once you have healthful options such as fruits and vegetables in your cart, you feel good about what you’re buying. That means you’re more likely to give in to the less healthful products you find throughout the store.”

Triggering your senses with colours

Continuing the ‘manipulating your brain’ theme, stores use colour in their advertising to encourage purchases, and will prioritise certain colours in key positions.

Everyday colours can mean profits for supermarkets, and certain emotions associated with colours generally include:

Interestingly, orange has the strongest connection with being ‘cheap’, while black products are associated with being expensive or ‘luxury’.

So, bear this in mind next time you catch yourself wanting something but can’t quite figure out why. It might just be because of the packaging.

In some major shopping chains like Coles or Woolworths, you’ll often have a choice between various trolley sizes: handheld, small, and big.

This might seem inconsequential, and you might just grab the first one you see, but there’s plenty of research out there to suggest that using a bigger cart leads to a bigger shop, and more money spent.

An American study from 2011, for example, found this to be the case:

“We did an experiment… and we actually doubled the size of the shopping cart. And you buy 40% more,” marketing consultant Marin Lindstrom said at the time8.

“In Whole Foods, the shopping carts over the last two years have doubled in size almost.” 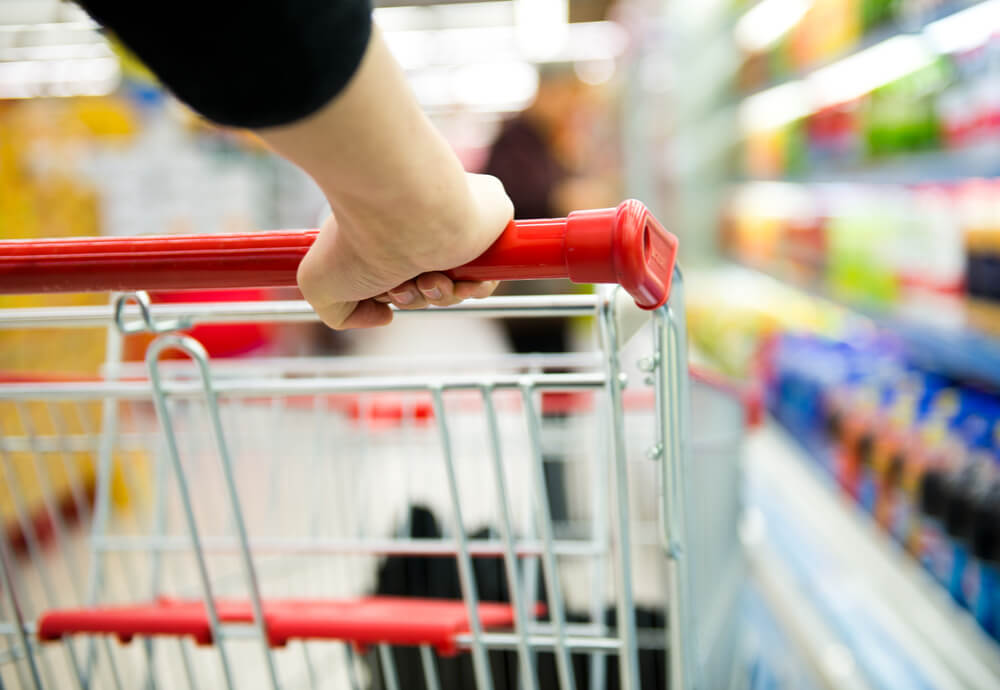 “Eye-level is buy level” is a slogan often used in marketing when it comes to shopping, and what it means is that customers are more likely to spot something that’s right in front of them, especially if it’s a well-known brand.

“Brands that sell best are always in what’s called the ‘bull’s-eye zone,’ front and centre, right in your sight line. It is the best placement, and the manufacturers have to pay for it,” Craig Childress, CEO of the marketing consultant Envirosell, said in 20189.

This phenomenon means stores often charge brands extra to put their products here, which in turn gets you spending more by default.

“There’s no advantage for the supermarket to show you the lowest-priced item in the most effective spot. So here you tend to see higher-priced items or items with the highest markup,” Mr Childress said. 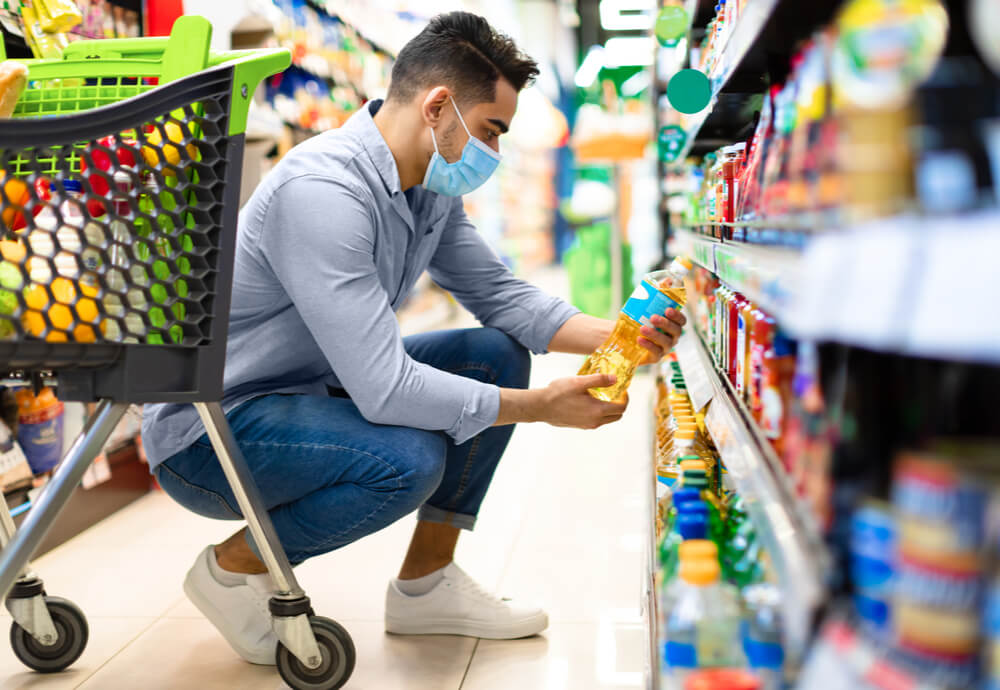 Looking below the middle few rows can lead to spotting some better bargains.

Rewards schemes such as Flybuys (Coles) or Everyday Rewards (Woolworths) are linked to major airlines, so shoppers can exchange their points for flights, hotels, upgrades and more. While that might sound good, these schemes don’t always represent good value for your spending.

Analysis by Point Hacks in 202010 found that “after a year’s worth of shopping exclusively at one supermarket, neither amount of points is enough to buy the cheapest Economy flight between two Australian cities with either Virgin Australia or with Qantas,” assuming an annual family spend of $12,000 per year.

These schemes do have frequent ‘bonus offers’, like 10,000 free points if you spend a certain amount in a number of weeks. While these can be worth using, many customers fall victim to increased spending by trying to earn as many points as possible, not realising that they simply aren’t worth the money.

This is especially true when it comes to the regular offers the supermarkets send to customers offering extra points on certain items, tailor-made based on their spending.

The problem got so bad that it drew the attention of the Australian Competition and Consumer Commission (ACCC), which said “there is an emerging risk of real consumer harm if individual consumers were to be charged inflated prices based on profiling derived from their data.”

How to avoid these supermarket tricks

It might be disheartening to learn just how much of a supermarket is designed to squeeze every cent out of you. Even the music you sometimes hear in-store is being played because of market research – a famous study in 198212 found shoppers spent 34% more time inside in stores that played music.

Hopefully this article has given you some new knowledge on how the supermarkets work, and might make you think twice the next time you’re pushing your trolley round the aisles. It’s entirely possible you’ve fallen for these tactics before, without even realising.

For next time, arm yourself with the following tips on avoiding overspending while grocery shopping:

Image by Syda Productions on Shutterstock.