The Most Popular Sportswear Brands

There’s no denying the popularity of sportswear today. While some wear sports apparel for the sole purpose of exercising, others, including some of the most famous celebrities, choose garments based on fashion and trends. Nowadays, sportswear gets its mass appeal through offering a unique mix of comfort and trendiness, and is now a staple in many wardrobes.

Here at Compare the Market, we wanted to find out the world’s most searched sportswear brands, as well as every country’s favourite sportswear brand, by analysing Google search results from 2021.

Nike is the most searched sportswear brand worldwide, beating Adidas by 134.1 million searches. Most of the top ten are old favourites brands, although Lululemon, Under Armour and Gymshark were founded within the last 25 years and have boomed thanks to social media.

The Top 10 Most Popular Sportswear Brands in the World 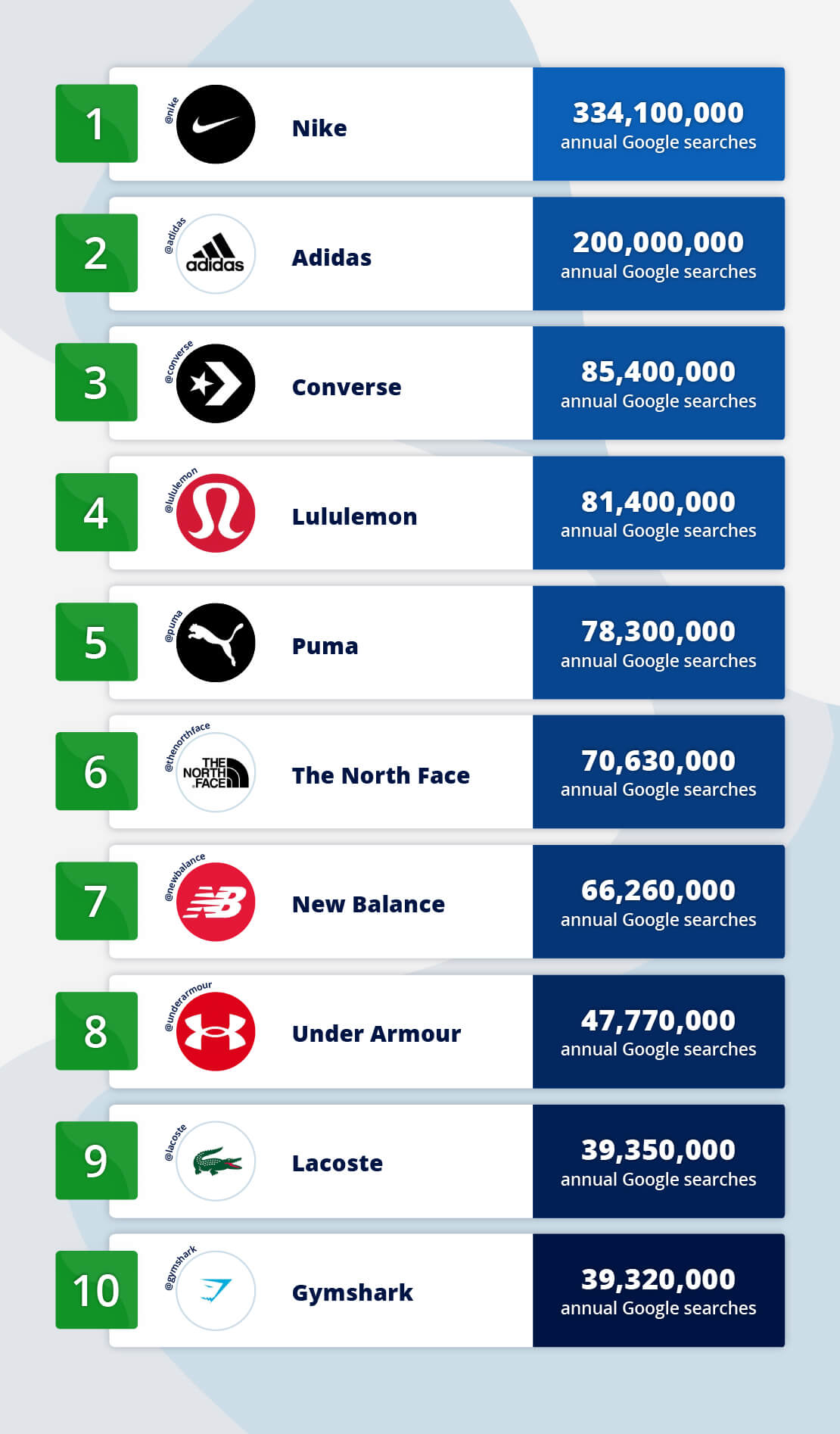 Nike is one of the most widely worn brands today. From their instantly recognisable running shoes to casual hoodies and sweatshirts, Nike apparel is popular among teens, adults and even celebrities. By pairing iconic designs with innovative marketing, Nike has become one of the most talked-about sportswear brands of all time, so it’s no surprise that it reigns as the world’s favourite.

Sportswear giant Adidas comes in second place as one of the most searched sports clothing brands on the planet. The ‘Nike vs Adidas’ debate has existed for years; however, with Adidas receiving around 134,100,000 fewer annual Google searches in 2021 than Nike, it’s clear to see who the winner is.

Converse is a sports street style brand best known for its classic Chuck Taylor All-Stars high tops. Designed by basketball player Charles ‘Chuck’ Taylor in the 1920s, the All-Stars were one of the world’s first basketball shoes, and the style has seen little change over the years. Converse’s comfortable and classic designs make them one of the most searched sportswear brands on the market.

Lululemon markets yoga-inspired workout wear and athleisure, with yoga at the core of its brand values. Named three times as one of Fortune’s fastest-growing companies since its foundation in 1998, Lululemon is one of the world’s trendiest yoga brands and most popular sports apparel companies.

Puma’s popularity has been growing over recent years, and after collaborating with big-name celebrities like Rihanna for ‘Fenty x Puma’ and Selena Gomez in 2019, the brand’s business is booming.

Some years ago, The North Face was synonymous with specialist hiking gear, Land Rovers and premium price tags. Now one of the most commonly worn brands, the North Face puffer jacket is an iconic part of sports street style, while their recent collaboration with Gucci proves the brand’s growing popularity.

New Balance is best known for its running shoes, and the brand surged in popularity last year thanks to being worn by Rihanna, Tom Holland, Timothée Chalamet and Leonardo DiCaprio. Alongside that success, collaborations with big names like Stone Island and Levi’s cemented New Balance’s place as one of the world’s most loved sportswear brands.

Founded in 1996 by former football player, Kevin Plank, Under Armour has been a cult favourite brand among athletes and gym-goers for years. Characterised by their adverts featuring top athletes like Stephen Curry and Michael Phelps, Under Armour’s global popularity is undeniable.

The French clothing label named after René Lacoste is instantly identifiable by the small green crocodile logo that features on most of their pieces. Their most popular product is the Lacoste polo shirt, while other luxury apparel, including shoes and watches, carry the same sporty comfort and appeal.

The youngest brand in the top ten, Gymshark was founded in 2012 by 19-year-olds Ben Francis and Lewis Morgan. Initially selling bodybuilding supplements, the brand quickly moved to market apparel. With one of the biggest social media presences of all sportswear brands, Gymshark secures its spot as one of the world’s most searched sports apparel companies.

The most searched running brand in the world 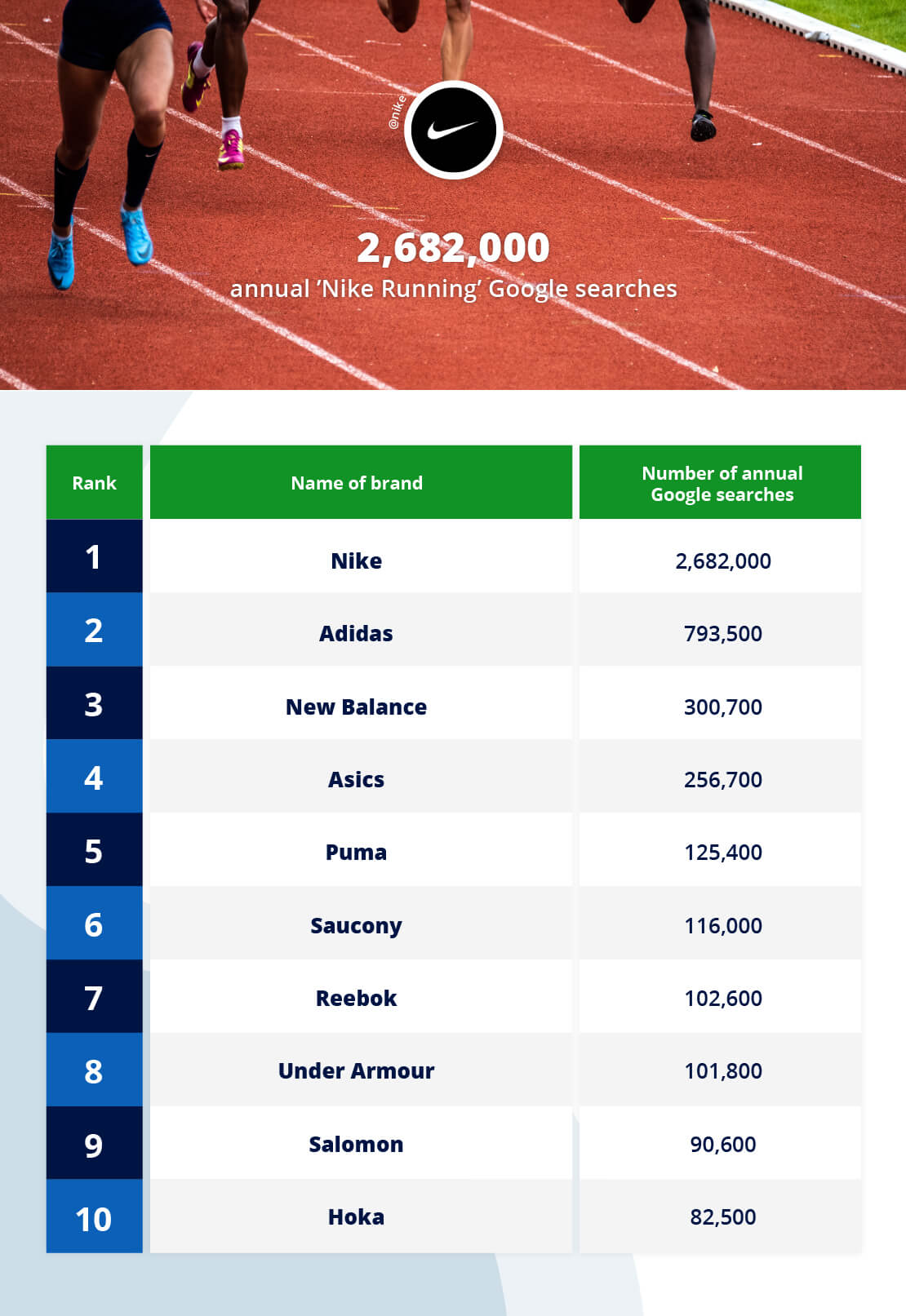 The most popular sportswear brand among runners is Nike, with 2,682,000 global Google searches in 2021 for ‘Nike Running’.

With a history linked to running, brand founder Phil Knight ran track at the University of Oregon and founded Nike with his coach, Bill Bowerman. One of the oldest shoes Nike produced was the Air Max, originally released in 1987 and designed for comfort while running.

The most searched yoga brand in the world 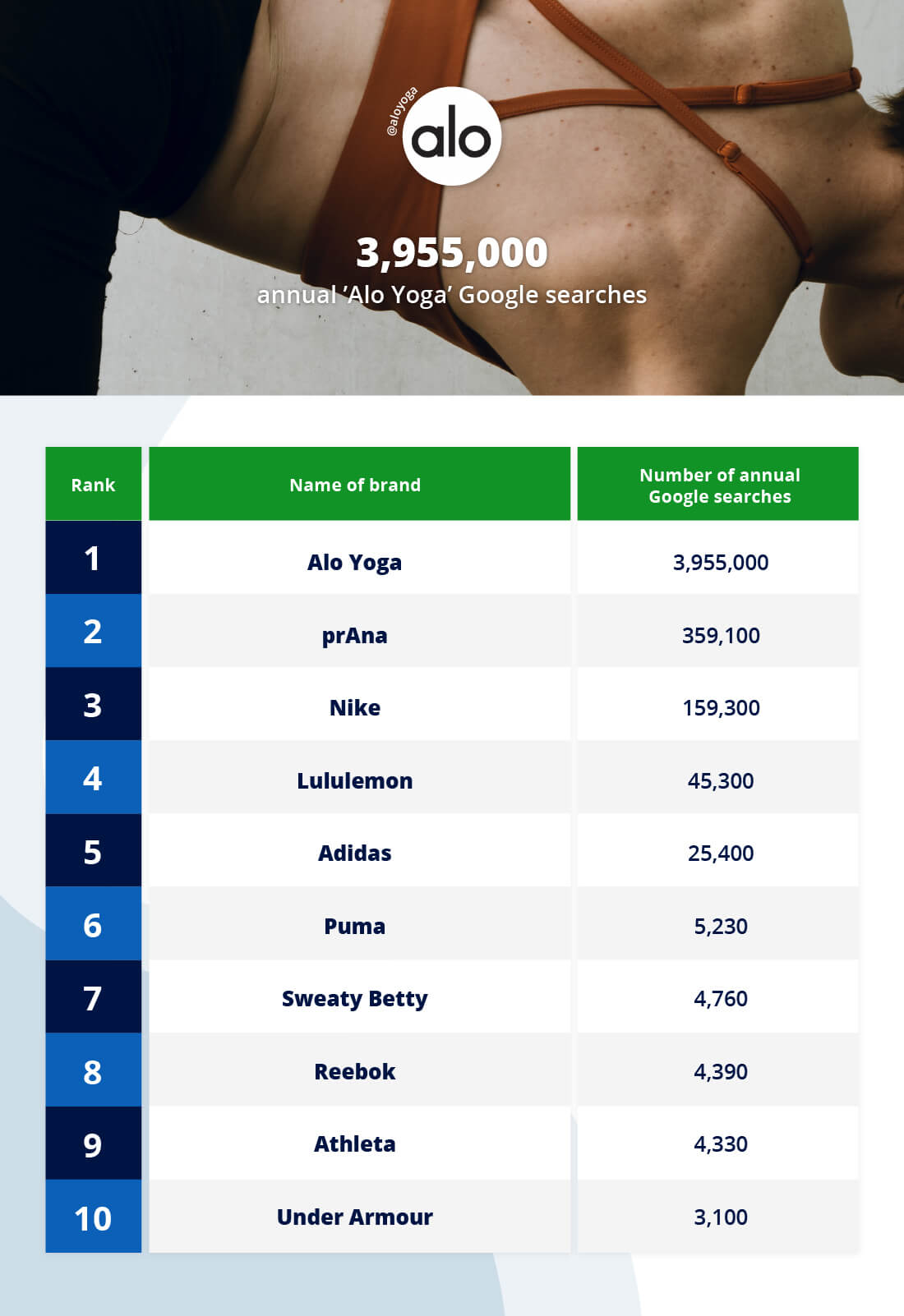 The world’s favourite yoga brand is Alo, with 3,955,000 total Google searches in 2021 for ‘Alo Yoga’. Founded in 2007 in Los Angeles, the brand is one of the trendiest on social media and has found popularity among celebrities including Jennifer Lopez and Hailey Bieber.

The most searched tennis brand in the world 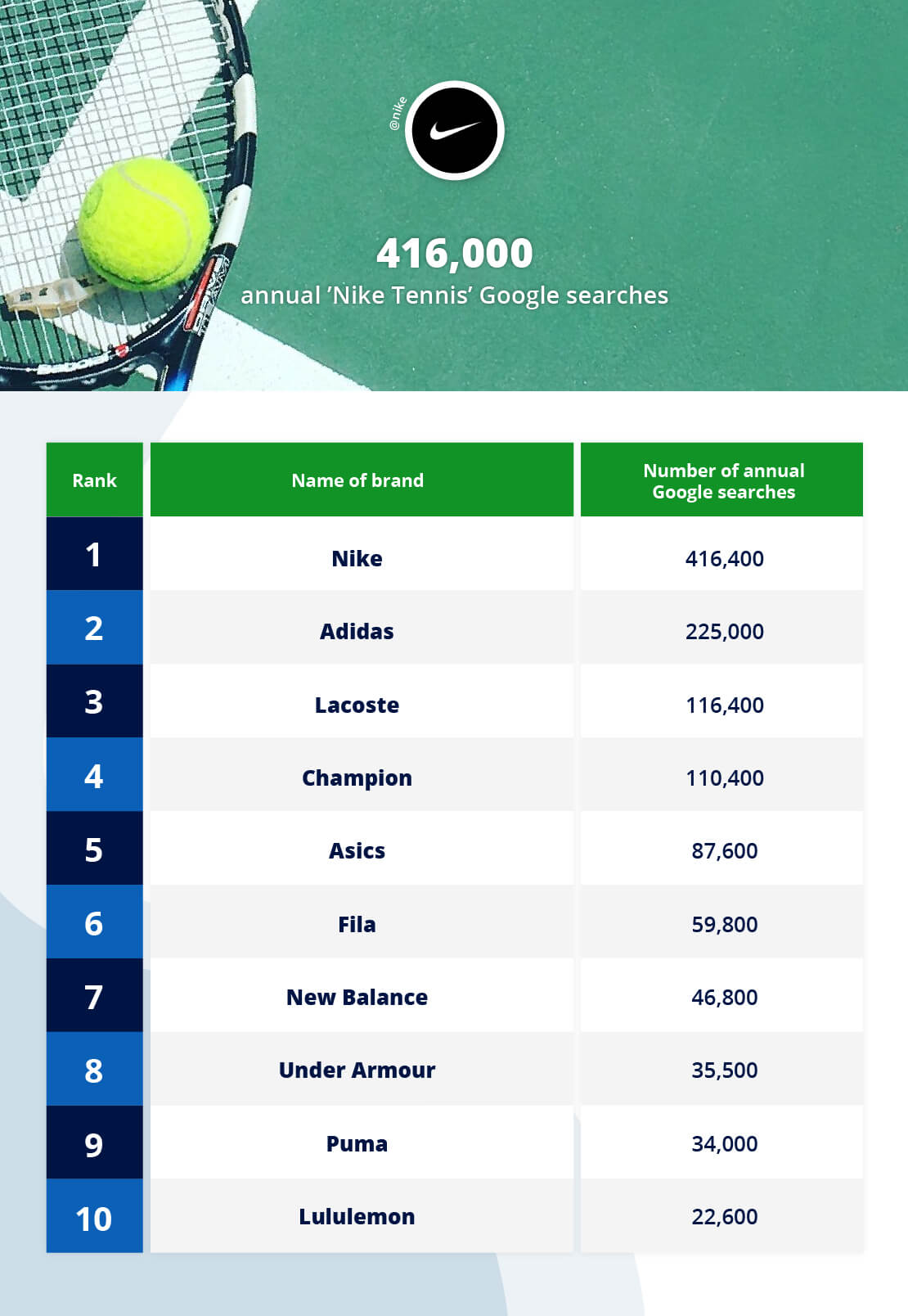 In the world of tennis, Nike is the clear winner with almost double the number of Google searches last year than Adidas. There were 416,000 searches worldwide for ‘Nike Tennis’ in the last 12 months.

The most searched outdoor brand in the world 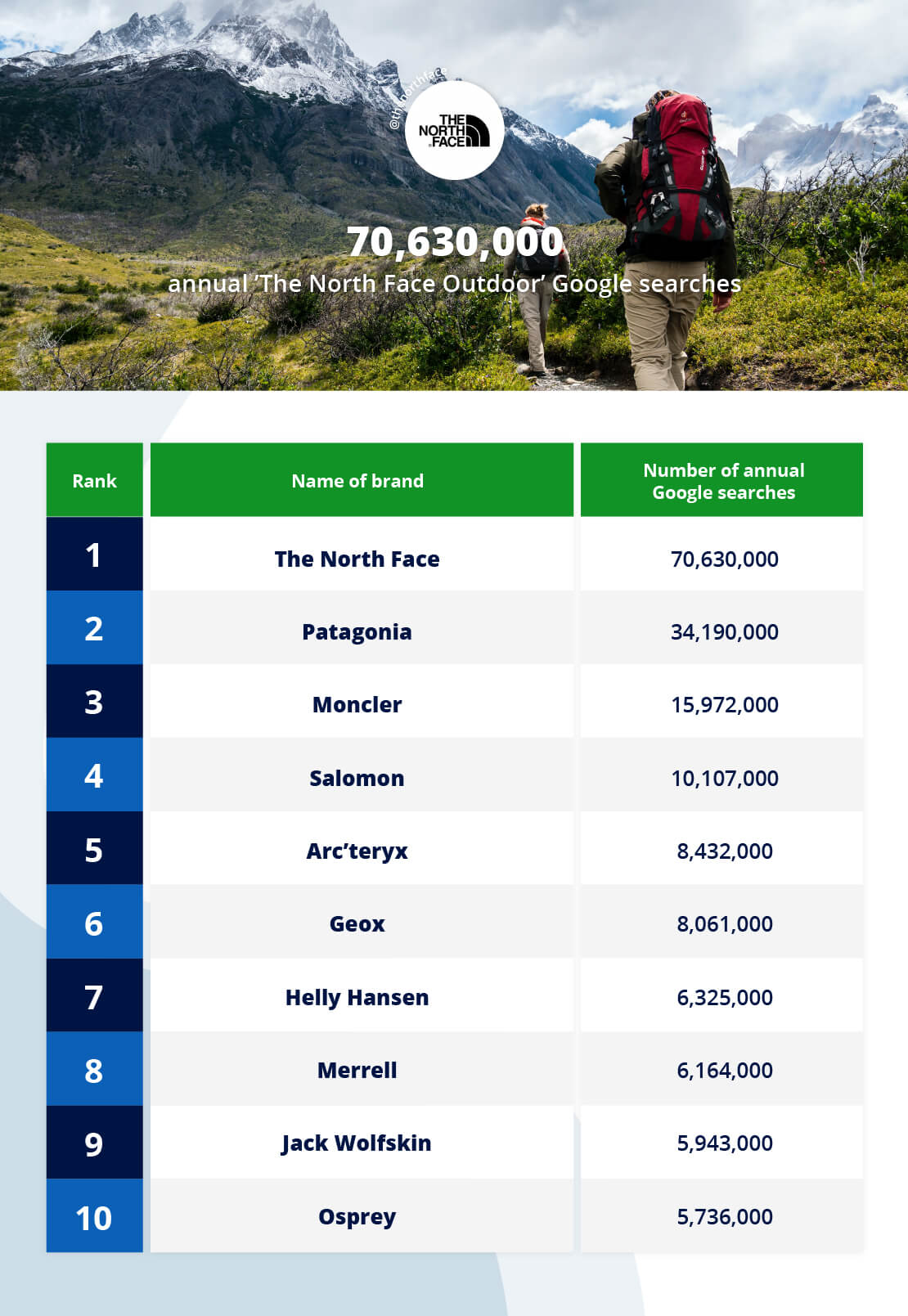 The North Face takes the top spot for the world’s most-loved outdoor sportswear brand, receiving over double the number of searches as Patagonia, which comes in second place.

With a commitment to crafting quality outdoor clothing, backpacks and shoes, The North Face produced rock climbing and camping equipment in the brand’s early days, opening their first store in 1966. By the 1990s, The North Face jackets became a fashion staple, and the brand’s popularity continued to grow.

The most searched cycling brand in the world 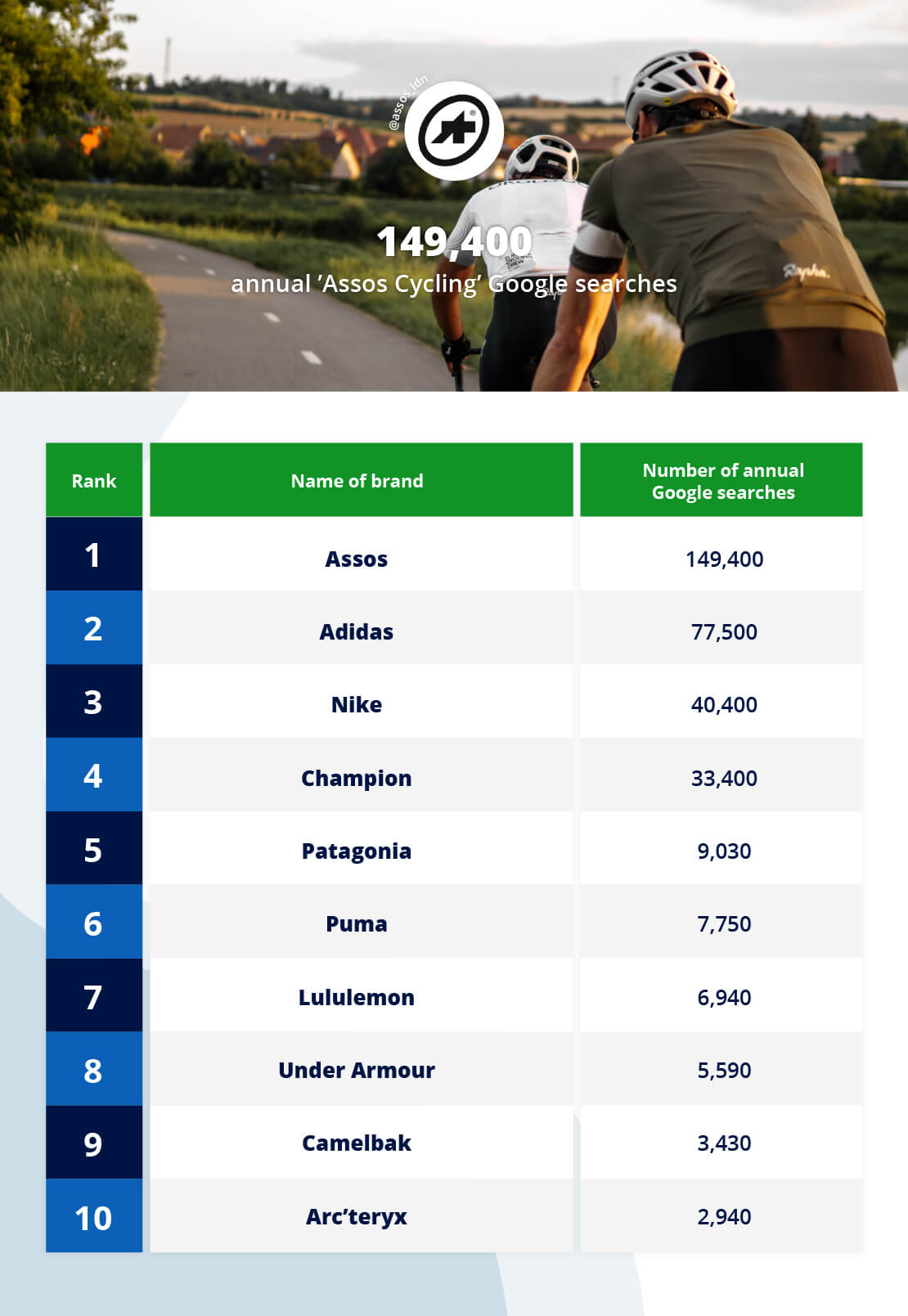 Swiss brand Assos is the world’s most searched cycling brand, with 149,400 total searches throughout 2021 for ‘Assos Cycling’. Originally a bike manufacturer, the brand started making clothing in their later years and are now best known for their bib shorts. 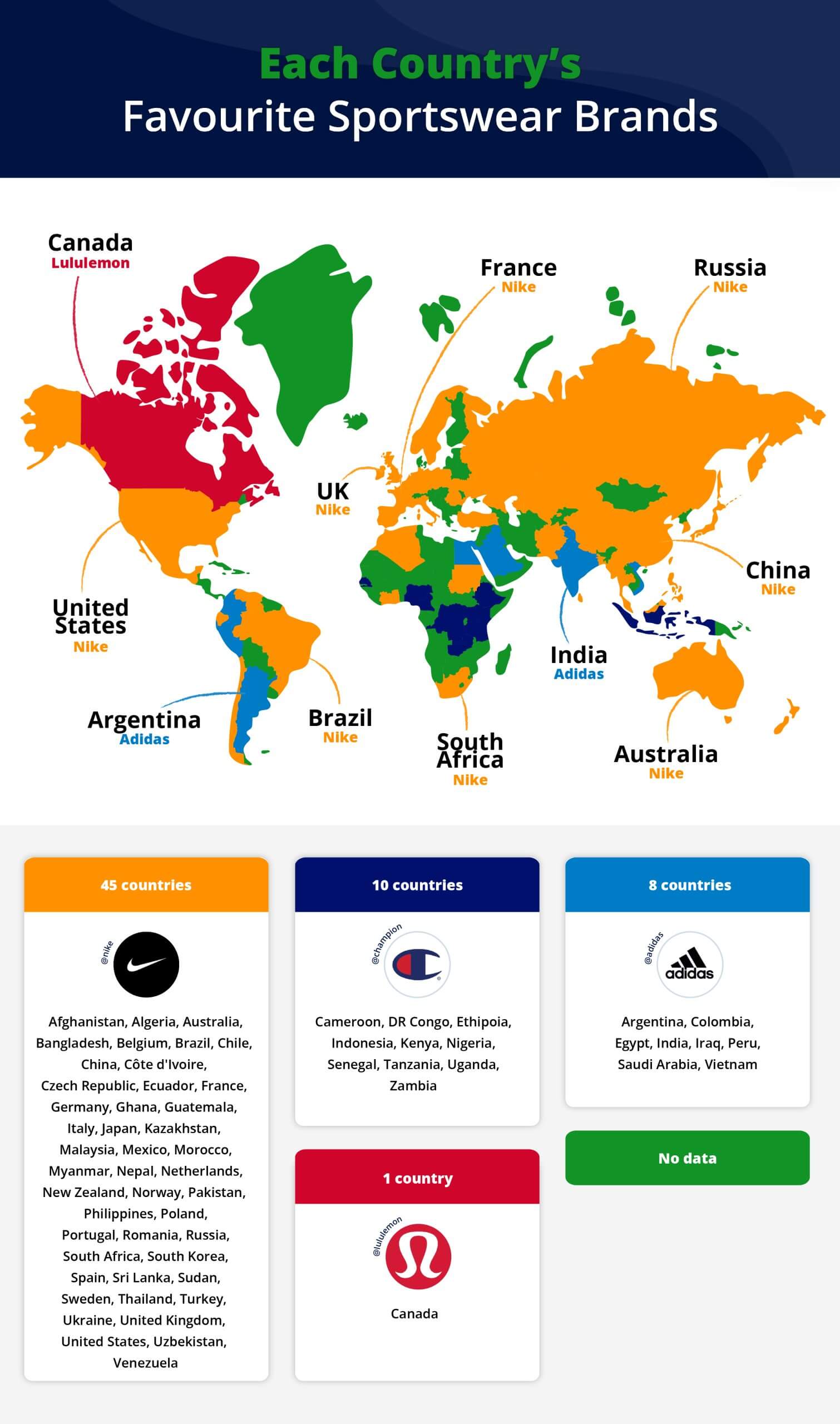 Nike is the clear winner as the most searched sportswear brand in 45 countries, including Australia, New Zealand, China, the UK and the USA.

Champion is the favourite sportswear brand in 10 countries, including Nigeria, Senegal, Uganda and Kenya.

Lululemon is the standout brand in Canada, with over 10 million more Google searches than the second most searched brand, Nike.

To find the most searched sportswear brands in the world and in each country, lists of popular brands categorised into running, yoga, athleisure and outdoor brands were sourced from Wiggle, The Yoga Nomads, Ranker, Vogue and Best Hiking.

Names of brands that could refer to other commonly used search terms (including ‘100 percent’, ‘Shock Absorber’ and ‘Black Diamond’) were removed.