The most dangerous times to drive on Australian roads

The deadliest time to drive

On average, more than 1,000 people die every year on Australia’s roads from fatal accidents and crashes.1 However, these incidents are not evenly spread throughout the year – there are times when the number of deaths on the road spike.

We explore the data to find out when most road deaths occur and what’s behind these increases.

What’s the most dangerous time of the week to drive in Australia?

On any given week, most road fatalities occur on a Saturday, based on data from the Australian Road Deaths Database (ARDD).2

‘Weekend traffic is more social, has less congestion and more likely to occur at night, where there is a higher risk for crashes,’ says Professor Cameron.

‘Social driving is more likely to involve alcohol and drugs. In urban areas during the weekend, people may be more inclined to speed, which can’t be done during the congestion we see on weekdays.’ 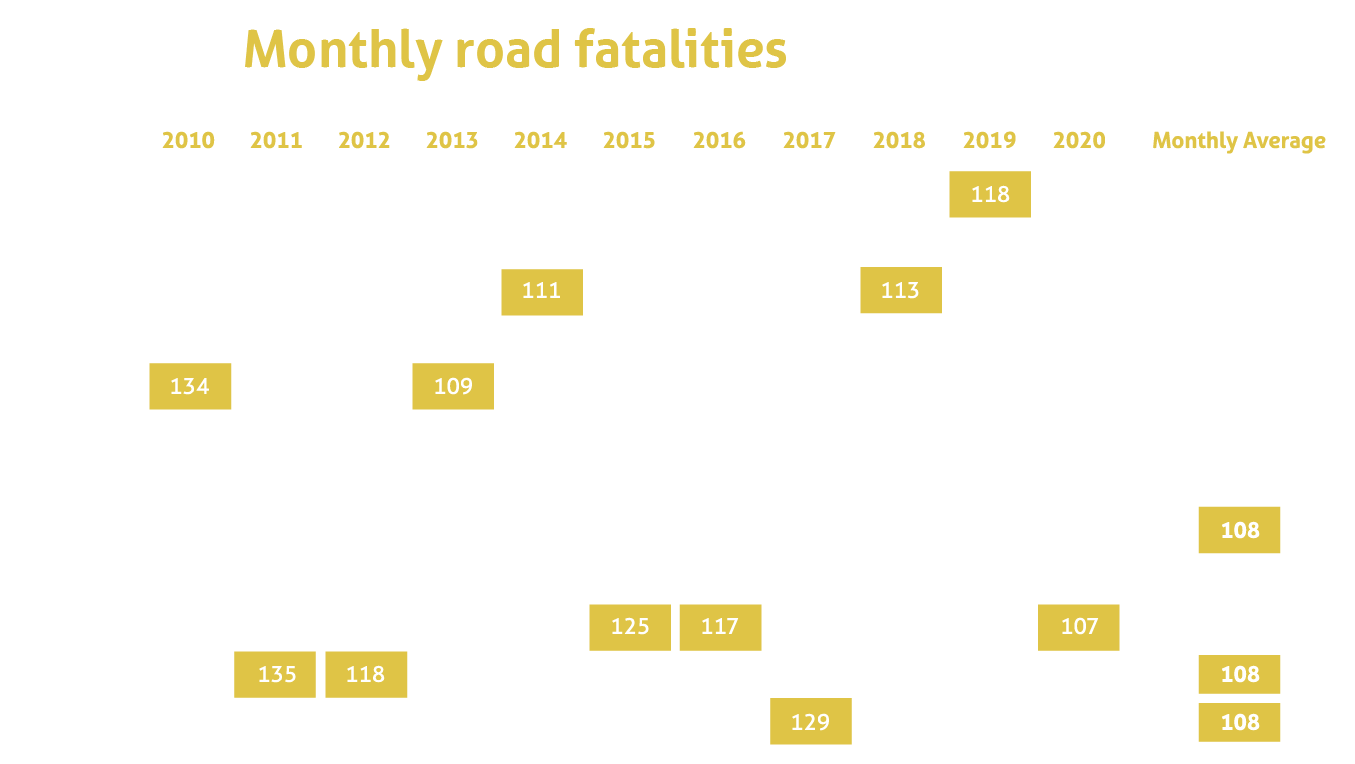 Notes: Monthly average is rounded up to the nearest whole number. Fatalities include drivers, passengers, pedestrians, motorcyclists, motorcycle pillion riders and pedal cyclists. The months with the highest monthly average fatalities for their year are highlighted.

Professor Teresa Senserrick from the Centre for Accident Research and Road Safety – Queensland (CARRS-Q) tells Compare the Market that there are clear spikes on school holidays.

‘The dates where we see spikes in road deaths match with school holidays. This is why there is justification for double demerit points during those periods.’

‘There are more fatal crashes that occur during holidays. A key characteristic of fatal accidents is they usually involve higher speeds, and higher speeds are more common in rural areas, which also see more traffic during holiday periods, increasing the risk.’

Other factors can increase the numbers, according to Professor Senserrick. This includes extremes in weather during the height of summer and winter, and the breeding season of animals.

The impact of Easter and Christmas on road fatalities

Christmas and Easter see specific spikes in road fatalities, but only represent a small period within the year, as shown above. Excluding Christmas, which increases the monthly average in December, August and November are the most dangerous time of year to drive.

Still, based on the Easter and Christmas fatalities alone, there is cause for concern as Easter road fatalities continued to rise from 2017 (2020 is the exception due to the COVID-19 lockdown), while Christmas road deaths have been declining steadily since spiking in 2017.

Notes: Fatalities include drivers, passengers, pedestrians, motorcyclists, motorcycle pillion riders and pedal cyclists. Easter is a five-day period from the Thursday before Good Friday and ends on Easter Monday. Christmas is a 12-day period starting on 23rd December and ending 3rd January. Deaths are rounded up to the nearest whole number.

Are road deaths in Australia declining?

Fortunately, the number of lives lost on the road has been declining since 2010 – with spikes in 2012 and 2016. Given that Australia has a growing population and an increasing number of vehicles on the road, this is a positive outcome.3,4

The reduction in road deaths is in part due to modern vehicles being safer than older ones. The Australasian New Car Assessment Program (ANCAP) notes that the fatality rate for cars built before the year 2000 is four times higher than that of vehicles built after 2011.5 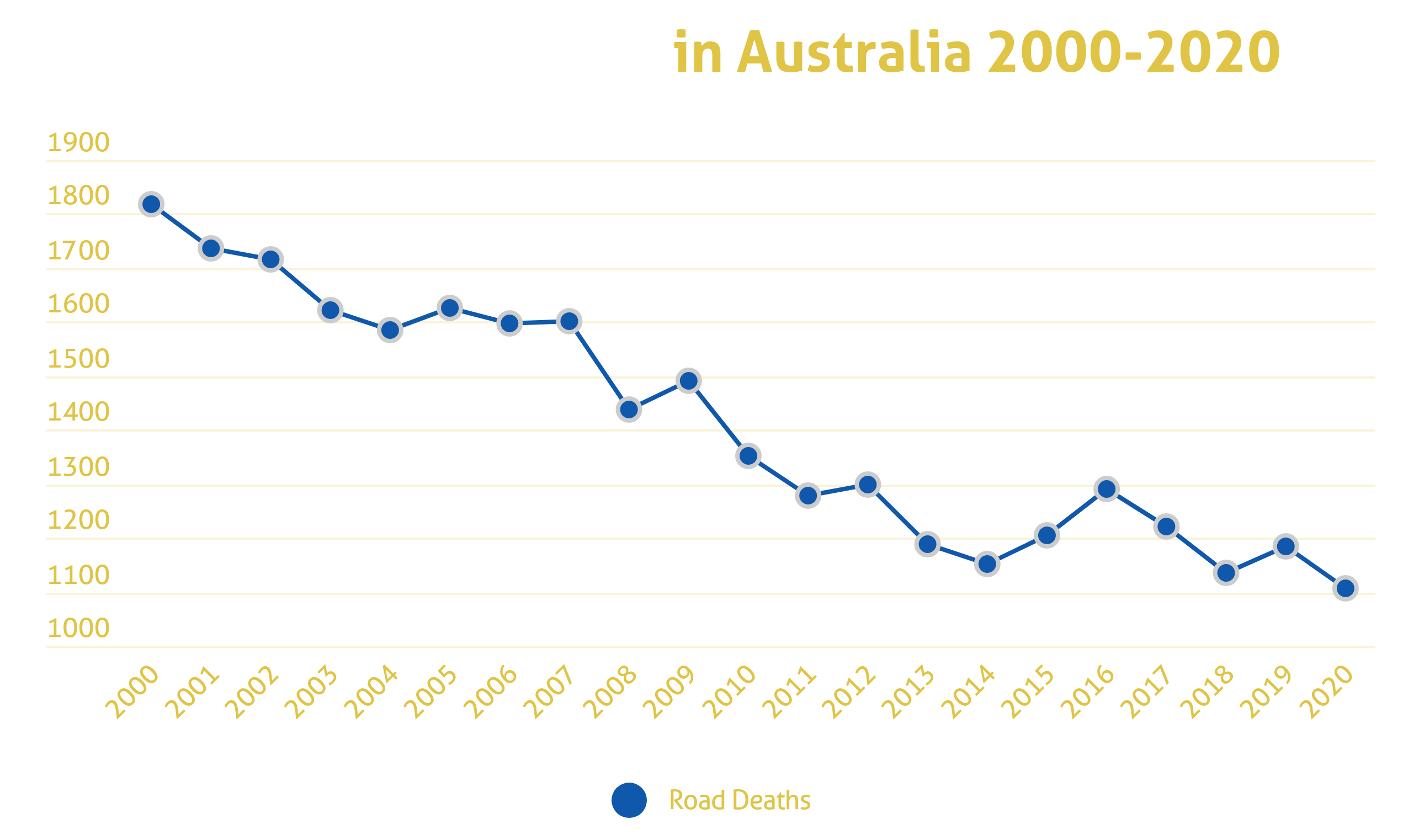 While rain creates an obvious risk factor for drivers, there’s no clear discernible trend in road deaths increasing during rainy months compared to months with less average rainfall, based on the monthly road death averages.

The issue with rain is based on how torrential it is, with light rain actually causing an increased risk of crashes – depending on location – according to Professor Cameron.

‘In some parts, rain is quite torrential, but when the rain first starts in Australia’s southern states, the roads often have a lot of dust on them. Rain turns that dust to mud, which is very slippery. Heavy torrential rain quickly clears the mud away.’

Professor Cameron adds that roads are designed to provide the right amount of friction for tyres so you can stop very quickly, but it’s hard to overcome that initial muddiness when rain first forms. Heavy rain also deters other types of road users.

‘Motorcyclists, cyclists and pedestrians don’t tend to be on the roads during heavy rain so much, so there are fewer fatal crashes for these groups of road users, who are at a higher risk of dying in a crash compared to vehicle occupants.’

Over a third of road fatalities occur at night

While most people drive during the day for work, errands and leisure, from 2010 to 2020, 38% of road deaths occurred at night, reflecting a much greater risk from driving at night.8

A number of risks are present at night-time driving, such as reduced visibility and driver fatigue on top of the risks associated with social driving.

Professor Senserrick states that while most drivers travel during the day, driving at night, any day of the week, comes with a greater risk of crashing.

‘Compared to the much lower amount of time we spend travelling at night compared to the day, the risk of crash is substantially greater. There are more nuances at work, such as driving at a time you would normally be asleep.’ 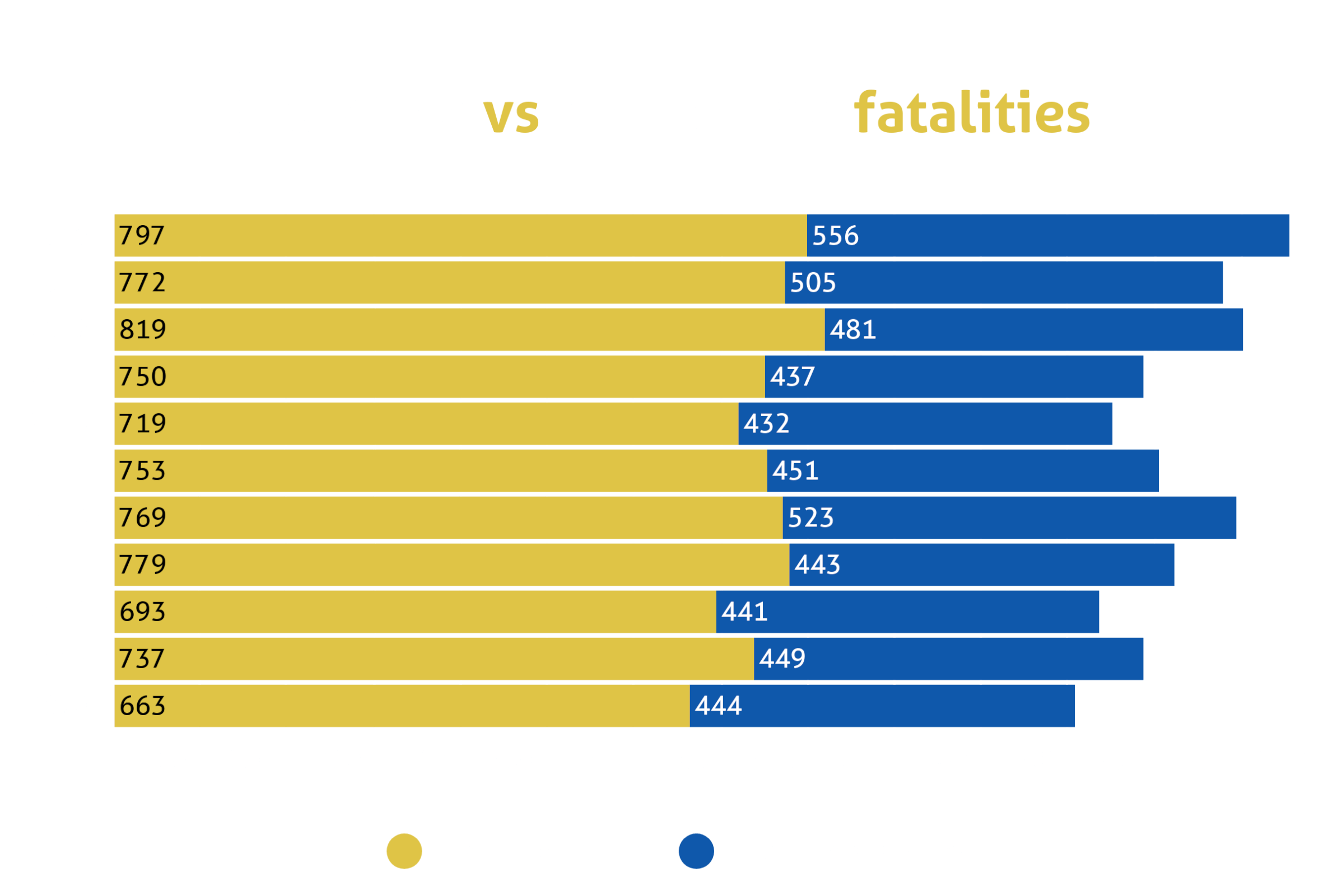 Your location is also a risk factor

There is a higher likelihood of road fatalities in rural areas, according to government data. 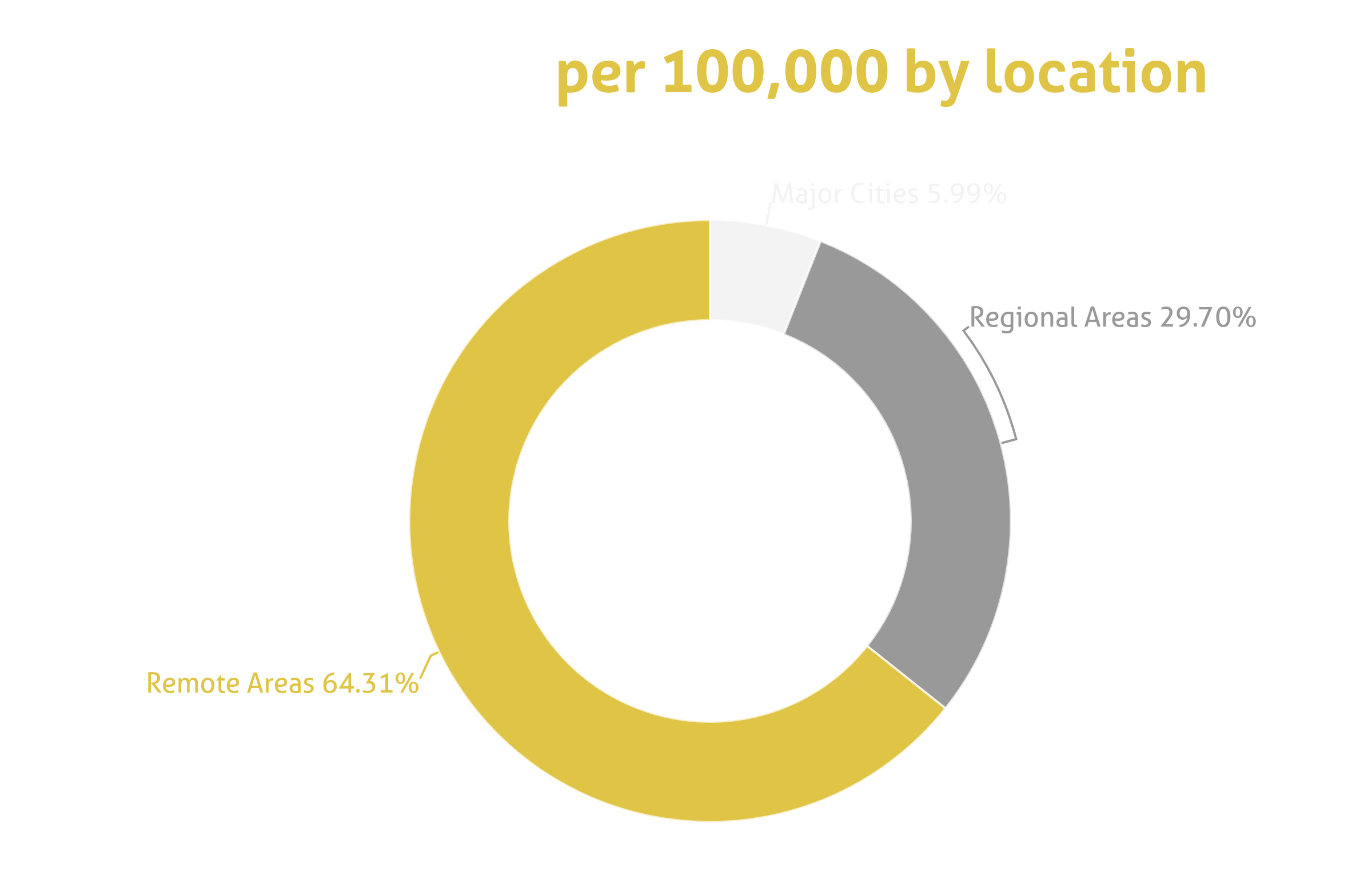 According to Professor Cameron, the quality of the roads, combined with higher speed limits, leads to higher road deaths. The distance between crash sites and the emergency services also plays a role.

‘Speed limits in poor quality country roads are often 100kph. Regrettably, some people drive at those speeds rather than driving to the conditions of the road. Also, the lack of traffic encourages some drivers to speed to excess.’

‘Speed is a big issue. It’s time we took it more seriously. It doesn’t just increase the risk of crashing, but it makes crashes more likely to result in fatalities.’

When asked about the greater fatality rate in regional areas, Professor Senserrick also called out higher speeds as key issue.

‘From regional to remote areas, the higher speed limits and less congestion have a marked role. It is simply the laws of physics. The higher the impact speed, the higher the risk of death.’

Are other countries also reducing their annual road fatality numbers?

Based on the available data, most countries are seeing a decline in annual road fatalities, except for two. New Zealand is reversing a recent upwards trend in road fatalities, but the number of deaths on the road in the USA continues to grow. 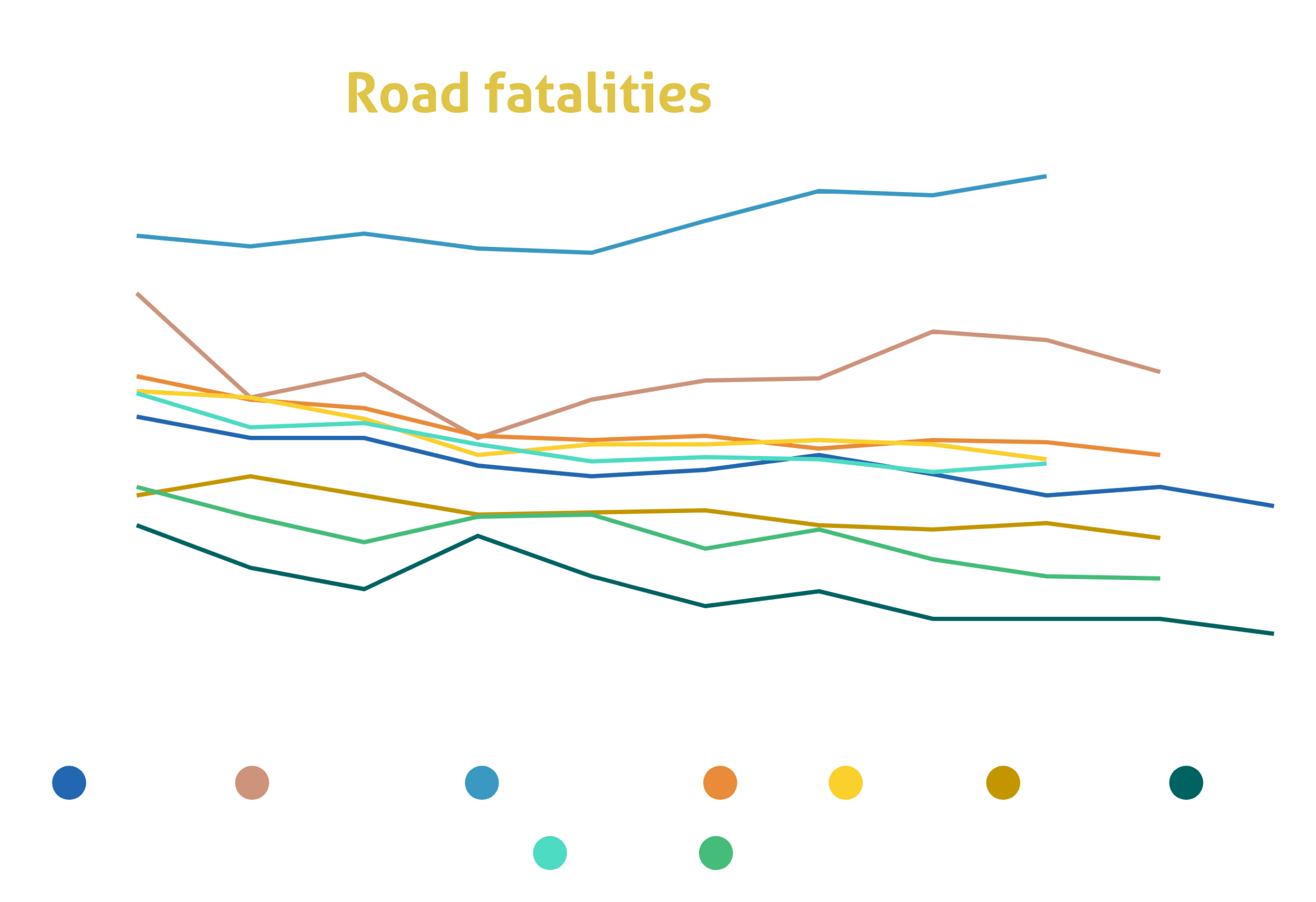 What is the Australian Government doing about the numbers?

Currently, Australia has a $2 billion Road Safety Program,9 which includes the Road Safety Strategy for 2021-2030. This is just one part of the massive investment federal, state and territory governments make on road safety enforcement, policing, and safety awareness campaigns.

The states and territories themselves have added their own millions to improve roads, such as Western Australia putting a combined $100 million into upgrading more than 17,400 kilometres of regional roads with audible lines and sealants to reduce ‘run-off road’ crashes.10

Reducing road fatalities to current levels has taken years of work, campaigns, and billions of dollars.  Given the reward is reducing deaths on the country’s roads, the investment is invaluable.

Brought to you by Compare the Market, making it easier for Australians to search for great deals on their Car Insurance.