Is your car always the shining star of the street or the dirty little secret? In a new Compare the Market survey, we asked people across America and Australia about their car cleaning habits and questioned whether it may be time to get the detailing sponge and hose out.

Our data shows that Americans most commonly clean their cars every few months (24.03% of respondents), closely followed by those who clean their car every month (22.35%). Surprisingly, there are also quite a few people (14.25%) who clean their car weekly, while the rest of the driving population struggles to get into the habit even just once a year, if at all.

Idaho came out on top as the state with the cleanest cars, where nearly 30% of participants stated that they clean their car every week. Almost a quarter (24%) of Californian and Oklahoma locals also clean their cars each week, rounding out the rest of the podium.

At the other end of the scale, Montana has the messiest cars on record as nearly 18% of respondents admitted to having never cleaned their car, or only cleaning it once or twice a year (19.61%).

While there may be an intergenerational war brewing between youngsters (aged between 18-34) and their parents (aged 55+) the data shows that they have the same line of thought when it comes to car cleanliness. Both age groups most frequently clean their car every few months on average. In comparison, the age groups between (35 – 54) prefer to clean their car monthly. 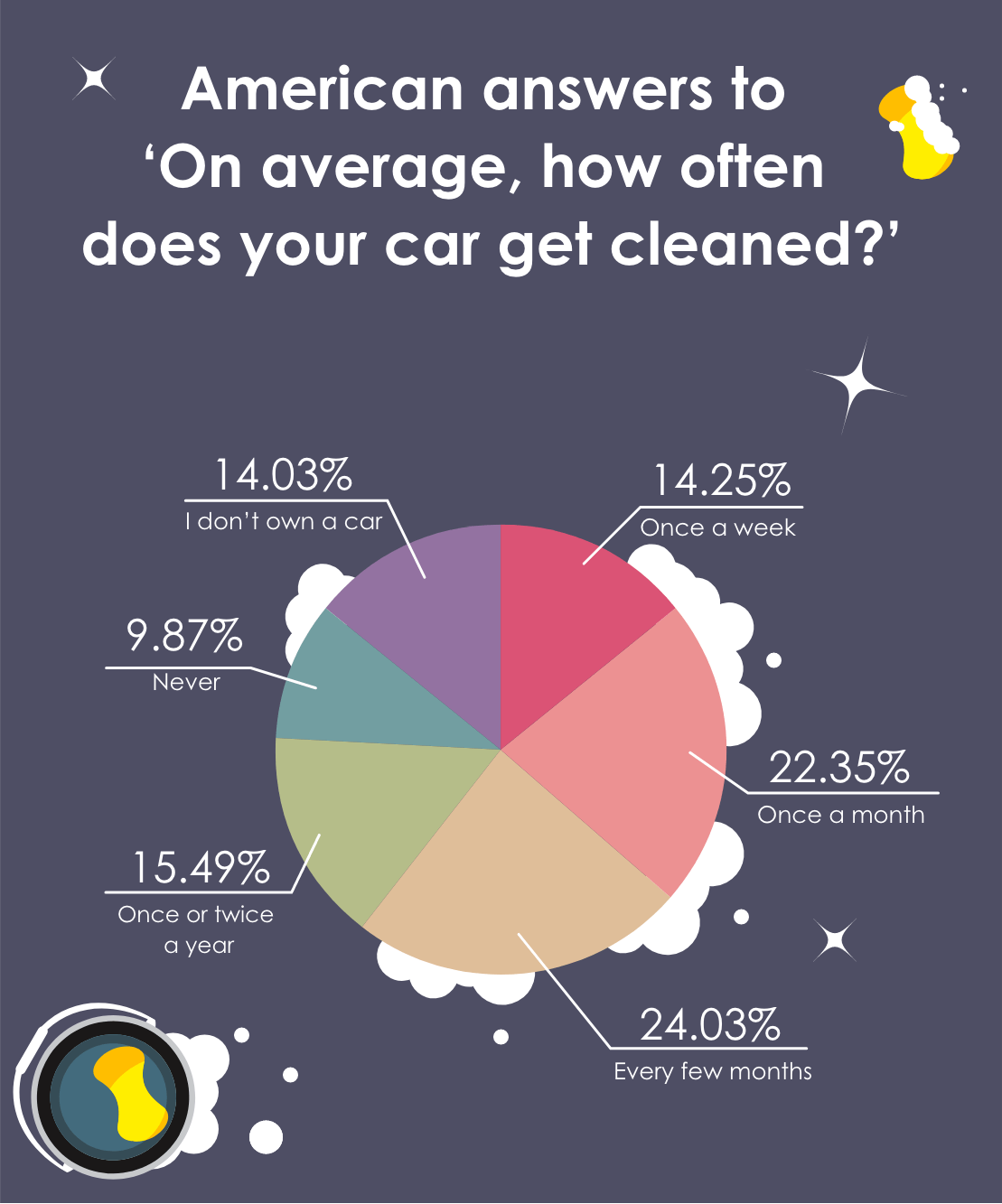 Just a show-off, or actually clean?

We also set out to see if people had a preference for outward appearances or internal perfection (i.e. do vehicle owners clean the outside or the inside of their car more often?).

The most common result (38.32% of Americans) admit that the outside of their car receives more attention. It’s a practice that is even more prominent in Iowa, where 54.9% of locals clean the outside more regularly than the inside.

Of the states that focus on the inside, Vermont returned the strongest results with just more than a quarter of respondents getting out the vacuum and tidying up the trunk on a regular basis. Arizonians may just have the cleaning balance right with a majority (37.25%) claiming to clean the outside and the inside of their car equally.

It’s a royal flush across the age demographics, as drivers of all age groups have suggested that they keep the outside of their car in better shape than the inside. 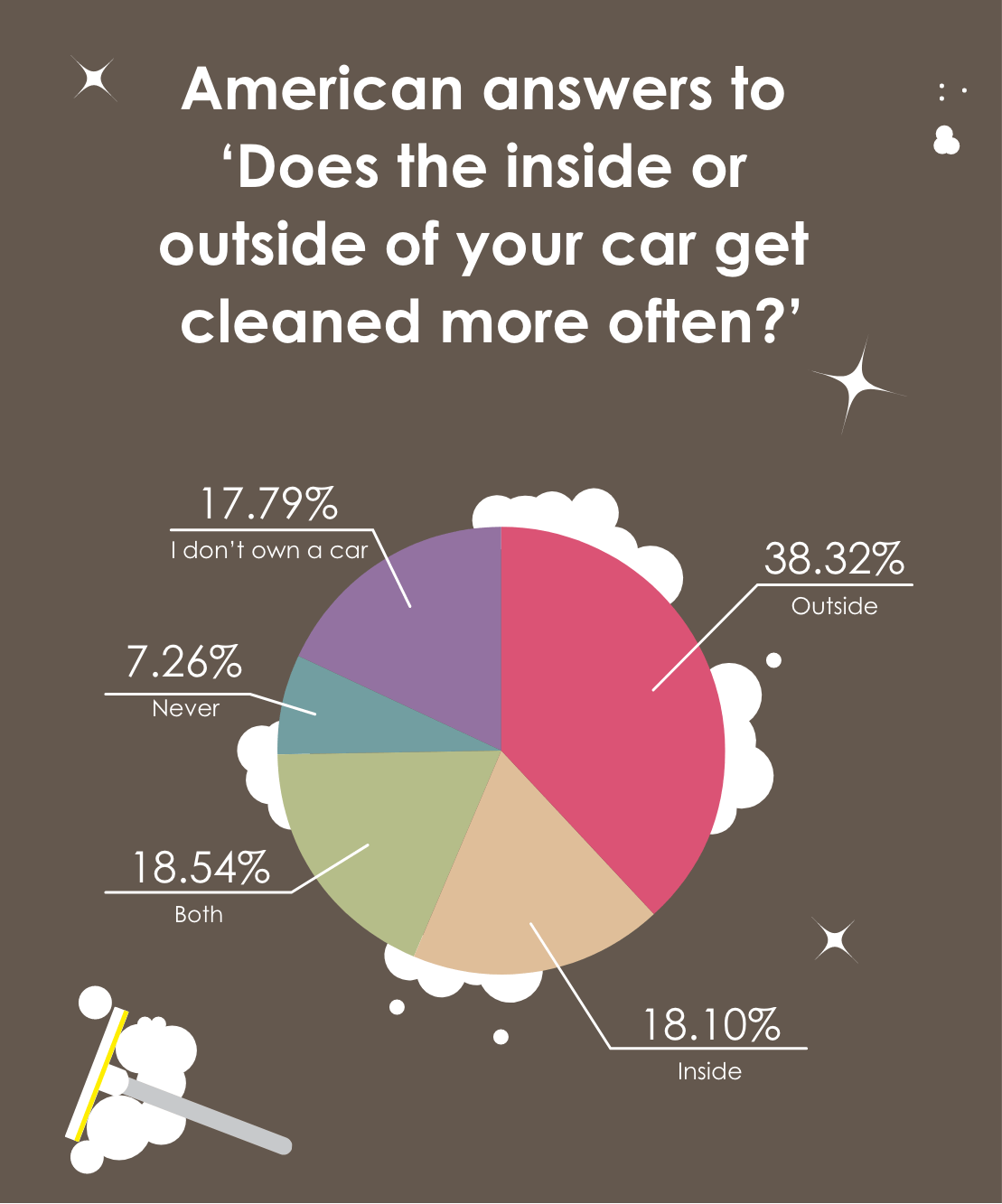 Looking after the hip pocket

When it comes to who does the cleaning, we were able to paint a picture of who likes to save money by doing it themselves and who is happy to leave their vehicle in the hands of someone they trust for a pretty penny. Nearly 40% of Americans seem to have a consensus on cleaning their car themselves, which is followed by just over a quarter of people (25.84%) choosing convenience over savings and paying for an automated car wash service.

South Dakota comes out on top as the stingiest of states, with more than half (56.86%) indicating that they clean their car themselves. In Wisconsin, at the highest rate amongst the states surveyed, 46% of people admit to forking out their hard-earned cash for an automated car wash, while 12% of Missourians spare no expense on cleaning their car by splashing out on a manual car wash service.

Americans in all states surveyed, except for 3, are also penny-pinching and prefer to clean the car themselves. While some drivers from those 3 states have an appreciation for cleaning their own cars, most drivers from Arizona (41.18%), Indiana (39.22%) and Texas (36%) would rather splurge on an automated car wash service. 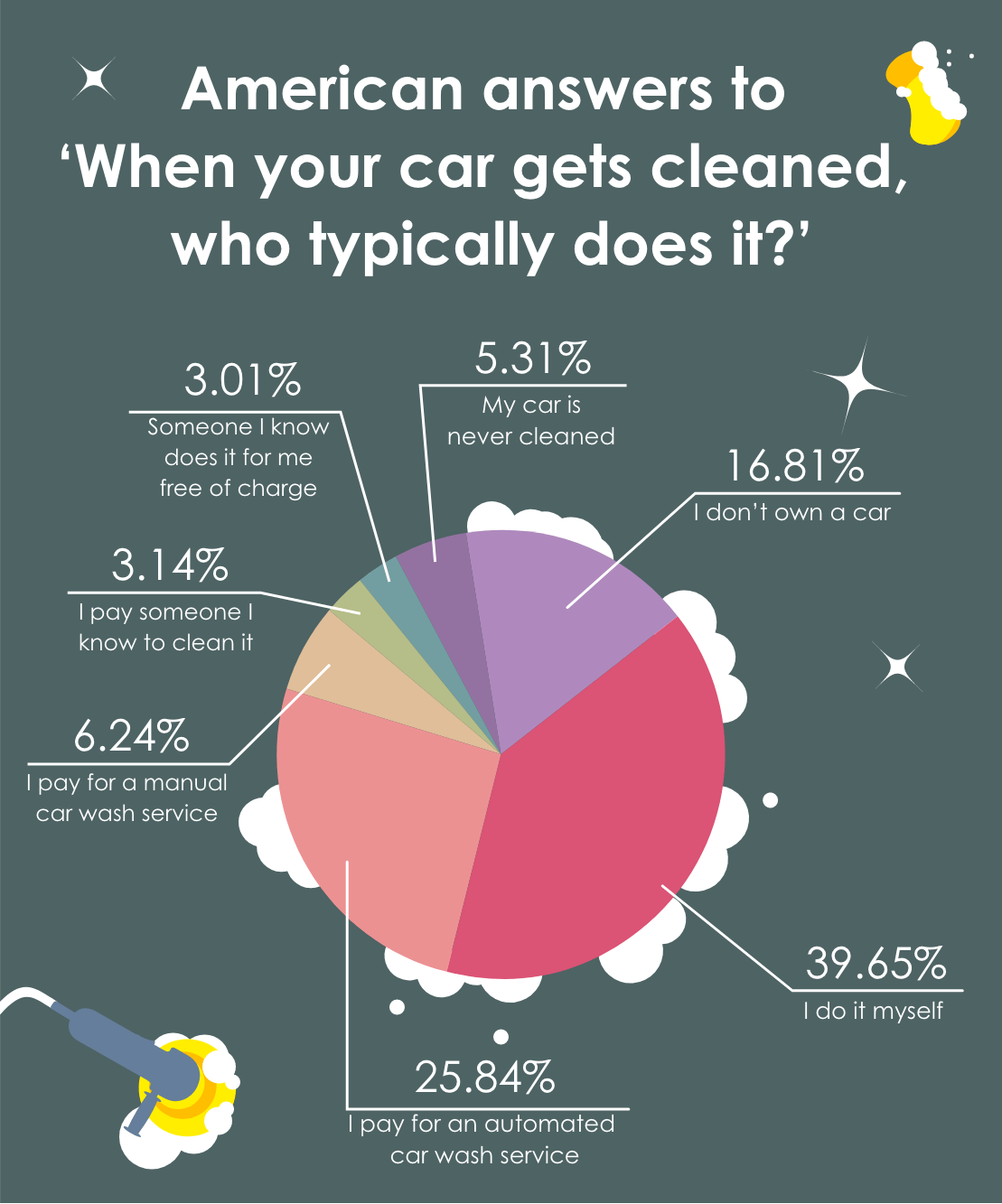 Ultimately, most of the male and female respondents acknowledge that they prefer keeping their car looking mint on the outside, rather than on the inside, at 38% and 39% respectively. There is also almost no difference in washing preferences with women (40%), and men (39%) equally preferring to drag out the vacuum cleaner and detailing sponge themselves, whereas 25% of men and 27% of women would prefer the convenience of an automated car wash.

How does America compare to Australia?

Does a relaxed country also lax on the cleaning? It seems that way. Only 20.96% of Aussies admit cleaning their car every few months, compared to the 24.03% of Americans saying the same thing. There are also more Australians admitting to never cleaning their car (11.38%) compared to Americans who sit just below 10%, while another 13.37% of Aussies only take the time out of their busy schedule once or twice a year to clean. While these data sets may not paint a clean picture, it should also be noted that out of the surveyed people, Australia has around double the rate of people without cars than those in America. 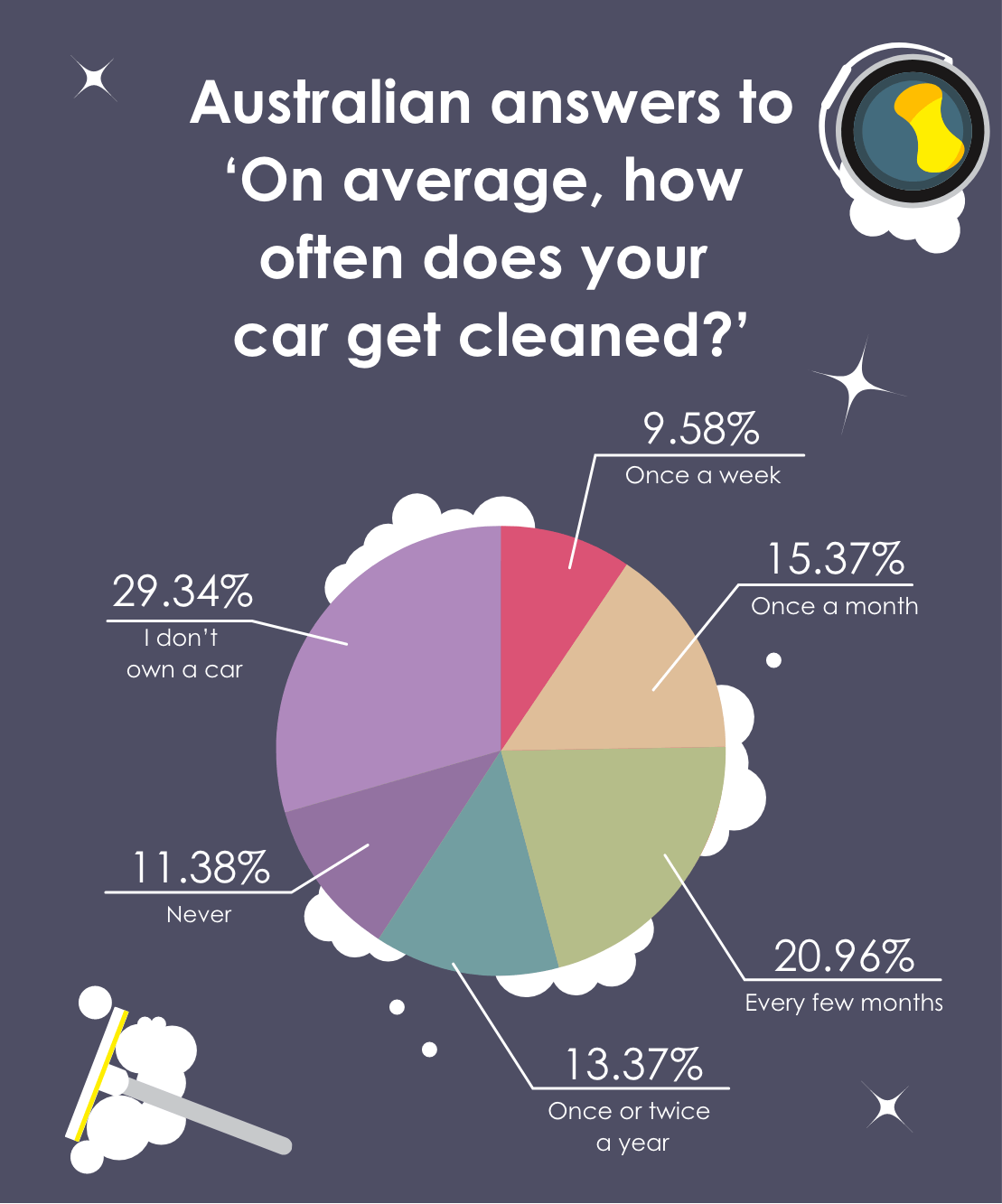 Australians also prefer to show off that new car shine, rather than clean the inside with over a quarter of respondents (27.74%) in Australians admitting to cleaning the outside of their car more often than the inside. Almost 7% of Aussies also admit that their car is never cleaned, which is similar to the rate across America. 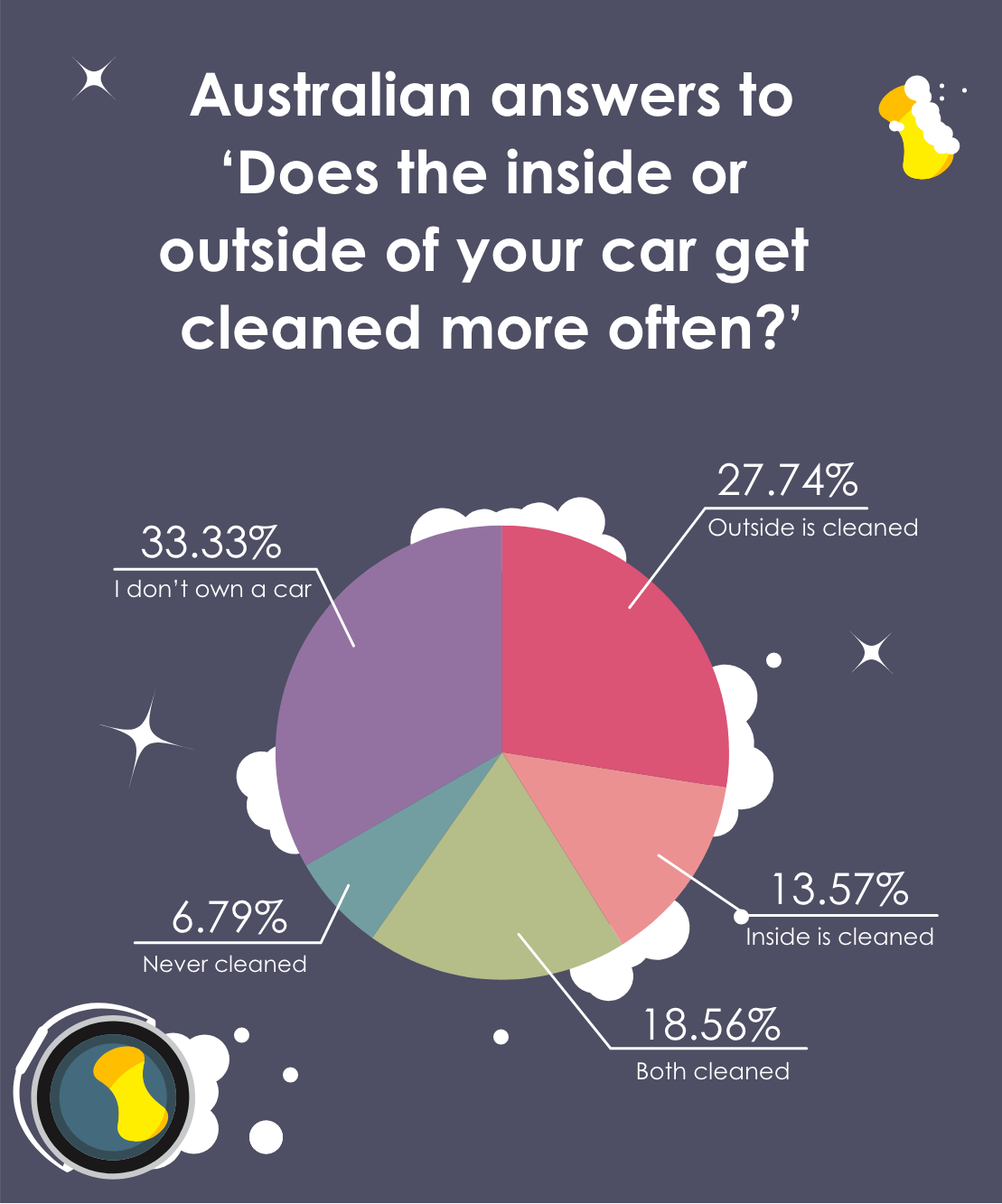 Australians, much like their American counterparts, are also quite stingy when it comes to cleaning their car, with 37.13% of Aussies stating that they clean their own cars. Quite a drop from the American stats (25.84%), only 9.38% of Australians indicate that they pay for an automated car wash, while slightly more people in Australia (8.38%) than America (6.24%) would pay for a manual car wash. 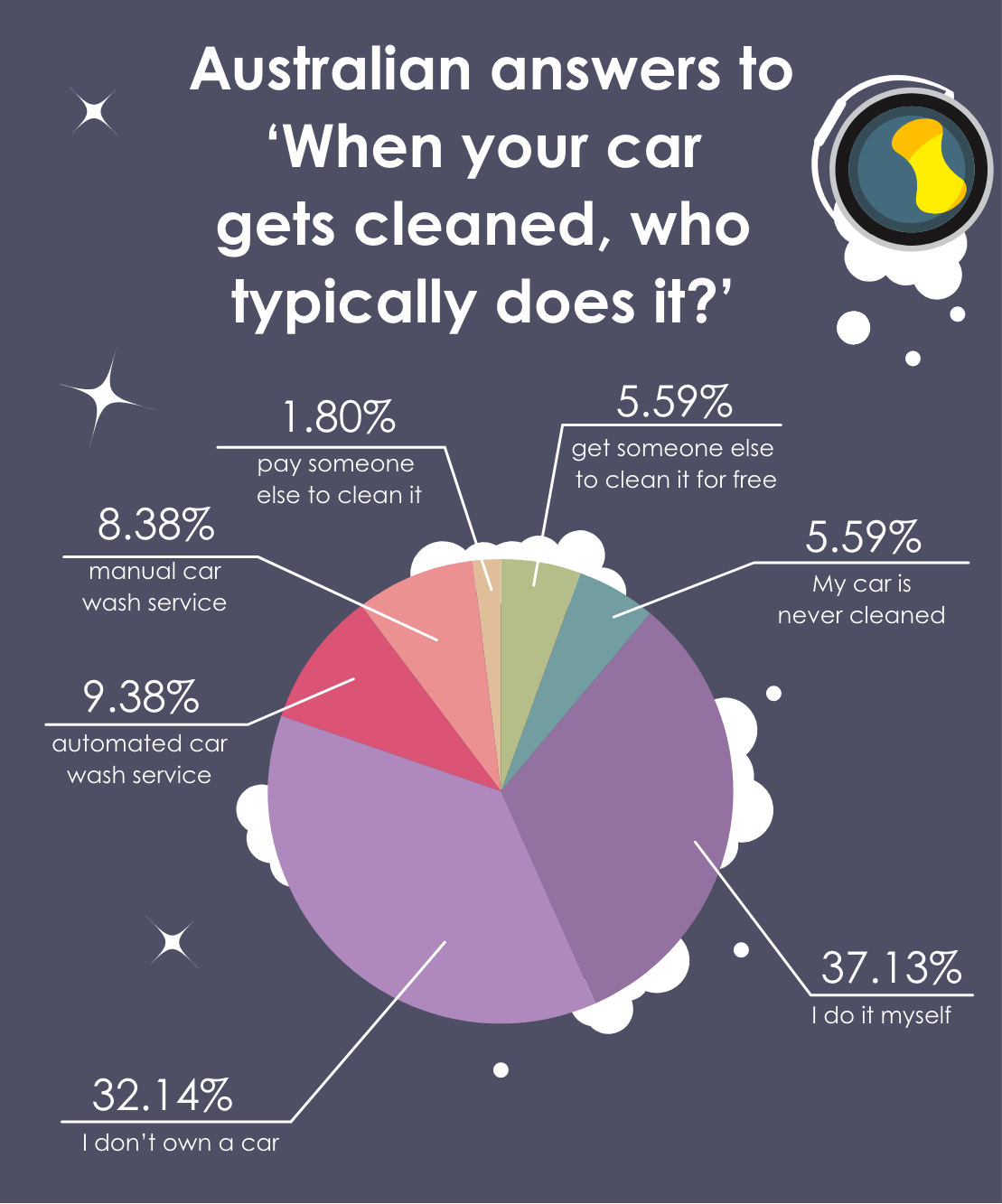 While we don’t think it’s time for most people to grab a detailing sponge and hose out soon, there may be a select few, especially from Montana, that should consider buying a new set of cleaning products. Overall, most people keep their cars in a relatively clean condition as we use them to keep our lives running like clockwork. At the very least, car cleanliness could be an interesting topic to bring up at your next barbecue!

Disclaimer: Responses from Alaska, Hawaii, New Hampshire, Rhode Island and West Virginia were not included in the above survey as there was not enough participants from these states to collect statistically significant data.