But how does this break down on a country level? And where does your country place?

This article reveals the total organ transplant numbers for member countries of the Organisation for Economic Cooperation and Development (OECD). 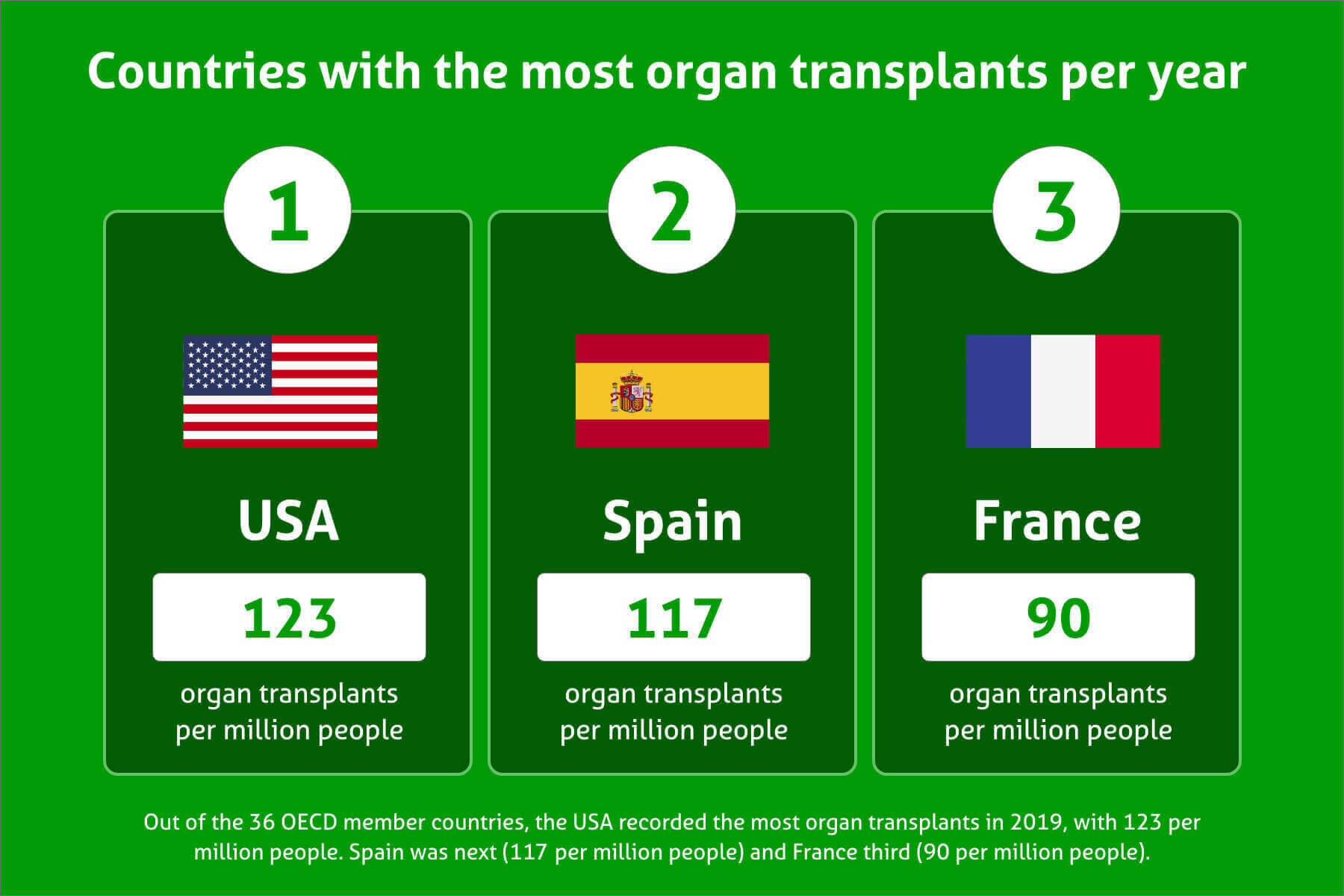 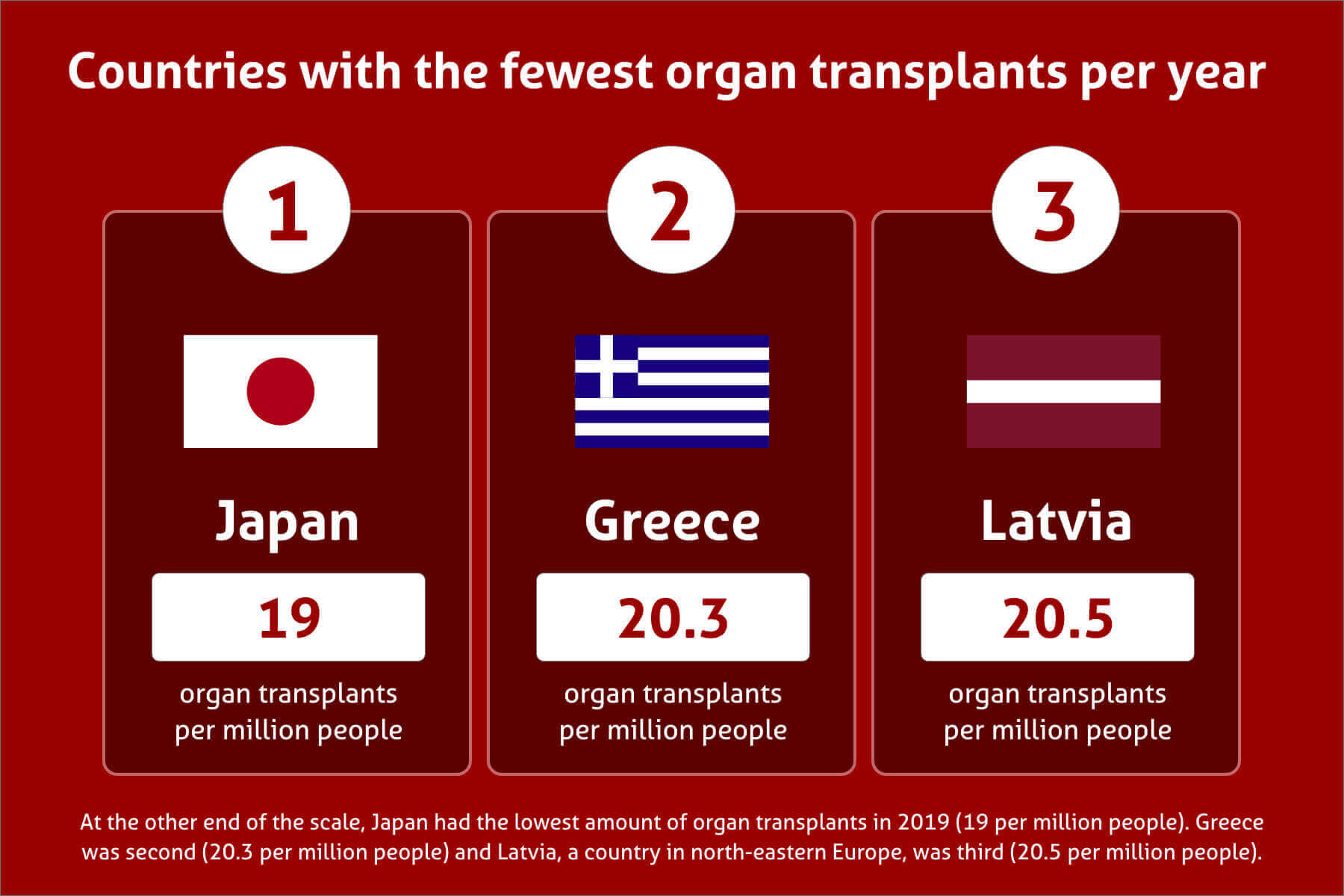 Most organ transplants by country

What affects a countries total number of organ transplants?

Countries with high rates of organ transplants heavily invest in medical infrastructure, including purpose-built intensive care units, transplant coordinators and specialised training for doctors and nurses. In Spain, they have a central body responsible for coordinating the entire donation system, called The Organizacion Nacional de Trasplantes.4

Developed nations like Australia and the US have dedicated websites with free educational content and online registers. The US has organdonor.gov, while Australia has donatelife.gov.au. There’s also World Organ Donation Day, which occurs every year on August 13. Many countries run media campaigns to raise awareness and motivate people to donate organs after death.

It’s clear that some countries focus on treatment while others focus more on prevention. Japan ranks last for organ transplants out of the OECD; however, they rank first for life expectancy (84 years old).5 Japan is also one of the slimmest countries with only 4.3% of the adult population recorded as obese, compared to 36.2% of the US adult population.6

While no major religions explicitly ban organ donation, some are more open to it than others. For example, Christians, Muslims, Buddhists and Hindus generally leave the decision to the individual while Shinto’s believe the dead body is impure and dangerous.7

N.B. Unfortunately, the majority of people who register for organ donation are ineligible. For instance, in the USA, only three in 1,000 people (0.03%) die in a manner that allows for organ donation.9 In Australia it’s also less than one per cent.10 The USA’s large of volume of donors means they still achieve a high amount of transplants per year.

The USA comes in at number one with 40,621 transplants. That’s roughly 123 organ transplants per million people. While they’re impressive numbers, they still have room for improvement. As of February 2021, more than 107,000 people were on the national transplant waiting list, with 17 people dying each day waiting for an organ transplant.11

A key aspect of Spain’s success is not only the opt-out (or presumed consent) system but their investment in education and medical infrastructure. As a result, Spain leads all OECD countries for deceased organ donors with 49 per million (deceased donors as opposed to living). The USA holds second place with 36 per million.12

In 2017, France adopted the opt-out (presumed consent) system after several other European countries did the same, including Spain, Austria and Belgium. This decision has resulted in third position for total organ transplants (OECD countries) and an increase in actual deceased donors from 28 per million in 2016 to 33 per million in 2019.12

Despite having one of the most innovative health systems in the world, Japan has the lowest rate for organ transplants (out of the OECD countries). There are many reasons why, including outdated laws (which make it difficult to get consent from families), conservative cultural beliefs and religion. Japan is primarily a Shinto nation, where most followers believe the body should not be divided after death. 7

A struggling economy and lack of investment in medical infrastructure put Greece near the bottom of total organ transplants. However, the Onassis Foundation is halfway through building the Onassis National Transplant Center (ONTRC) in Athens. The four-floor building will provide the Greek public with a state-of-the-art transplant hospital for many years to come.12

A predominately Christian country with the opt-out system, Latvia recorded the third lowest number of total organ transplants with 20 per million people in 2019. This could potentially be due to their underfunded health system, which is the second lowest funded health system in the EU after Romania.13

How many Australian lives have been saved in the last decade?

Chief Executive Officer of the Australian Organ and Tissue Authority, Lucinda Barry says the effectiveness of organ donation in Australia over the last decade has been profound. “What we have seen in the past decade is more than 14,000 Australians receiving an organ transplant and that’s thanks to 5,000 donors and their families who said “yes” to donation, and we’d like to thank them for that.”14