How well do people prepare themselves and their households for natural disasters?

As each year passes by, natural disasters get more severe. While the will and strength of those rebuilding their lives in the aftermath is nothing short of exemplary, there is still work to do in improving peoples’ preparedness before these events occur.
Home and contents comparison website Compare the Market surveyed 2,513 adults across Australia, Canada and America to see who are the most prepared.

In 2021, there were over 400 natural disaster events that happened worldwide.1 When we asked respondents whether they had experienced a natural disaster in their lifetime, the results were alarming. For Australians, one in every three people said they had lived through a natural disaster, though for people living in Queensland, as many as 45% of the people surveyed fell into this category. This is well above the quarter of people in Victoria or the 37.8% in New South Wales who had a similar response. 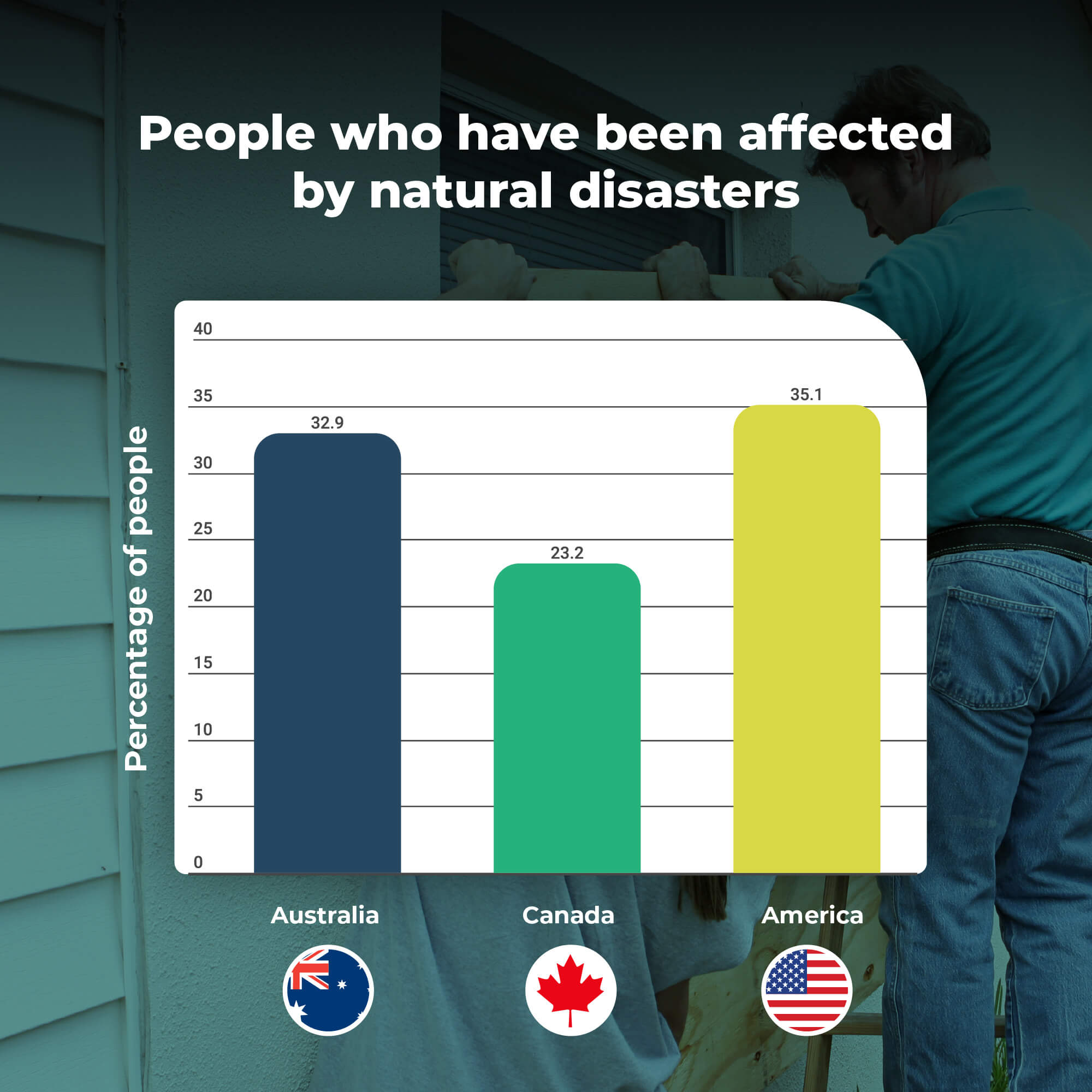 Surprisingly, our survey found that people aged 25-34 were the most likely to believe that they had lived through a natural disaster across all three countries, while people aged 55-64 were the least likely.

Only around one in two people are prepared for a disaster

Over 58% of Americans, the highest of the countries surveyed, indicated that they were prepared for natural disasters in some way, shape or form.

Australians seemed to be less prepared, with less than half (46.6%) of the respondents saying they have an emergency kit (or something similar) on hand, while only 43.7% of Canadians said they were equipped. 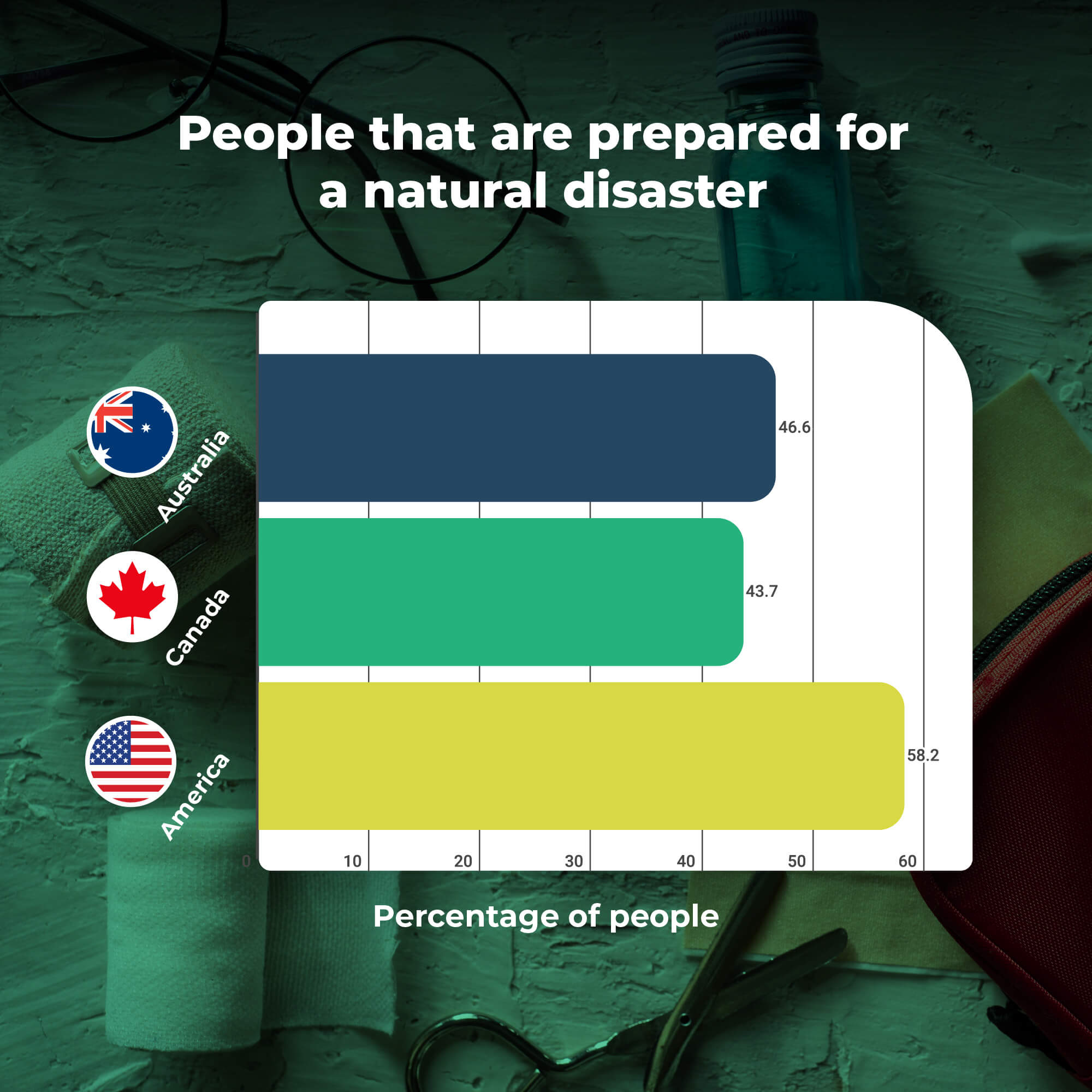 Across all countries, the most common way that people were prepared for a natural disaster was by preparing an emergency first aid kit followed by an emergency kit with tools.

It may not be something that we often think about, but checking natural disaster risks and warnings before moving to a new property (whether renting or purchasing) can save a few headaches later down the track. For example, those living in areas known for particularly bad storms would be wise to refrain from keeping lightweight furniture in the backyard. The same could be said for a place prone to flooding in the wet season.

Despite this, over 60% of Australians have admitted to not checking the natural disaster warnings and risks before moving into their current place of residence. And while Americans were the most likely to say that they have lived through a natural disaster across the three countries, only 36% of them were likely to check that their property is not at risk of a natural disaster. Canadians may be the worst offenders, with more than 65% of respondents letting us know that they were yet to check for natural disaster risks for their homes. 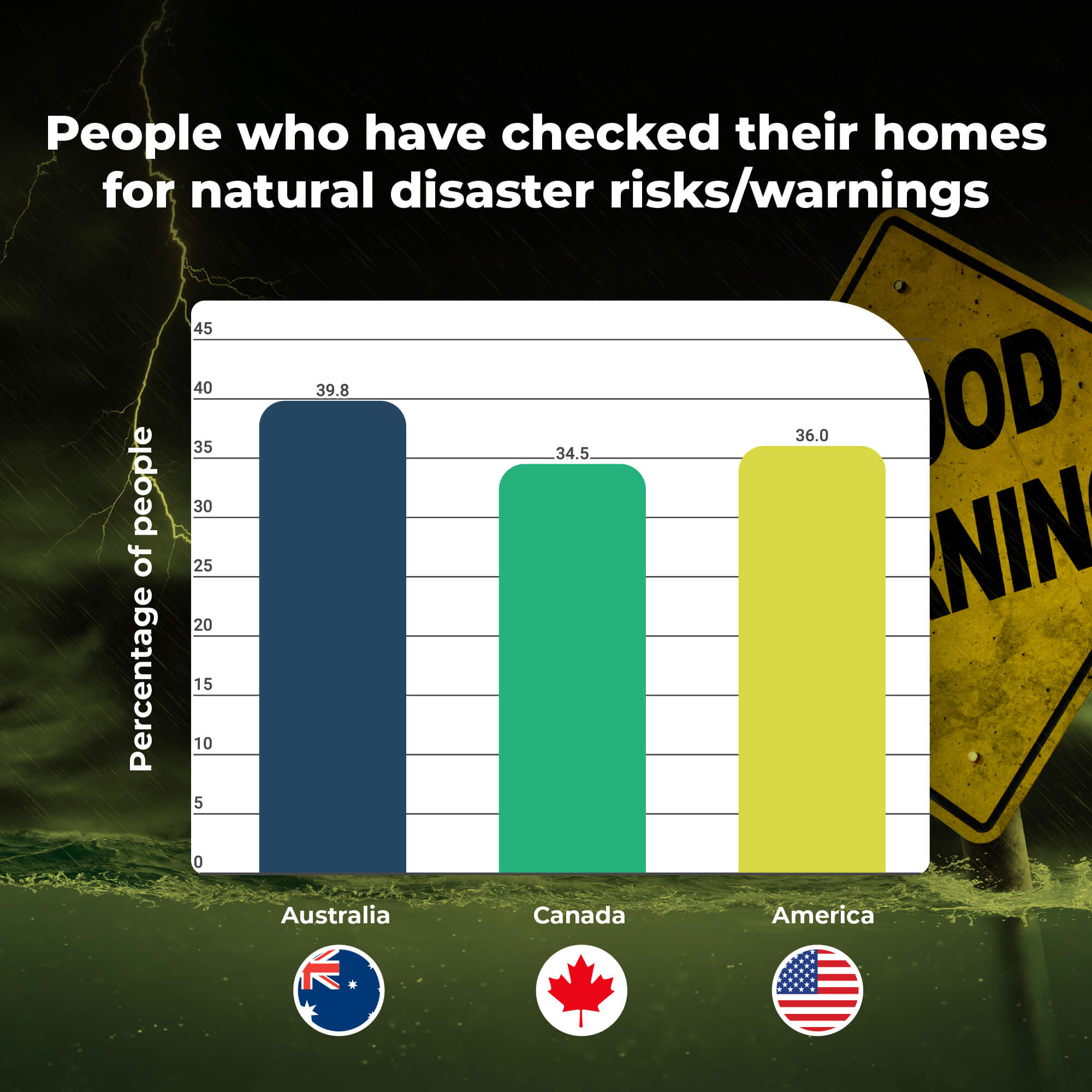 Another way that people might be able to protect themselves and their households from natural disasters is through insurance. We asked our respondents how many of them ever received a quote for home and contents insurance to see if people were more open to having financial protection rather than physical protection.

We found that people on average were more likely to have considered financial protection for their belongings (53.5%) compared to having some sort of emergency kit ready at home (49.5%)

Only around one in two people are prepared for a disaster

Stephen Zeller, home and contents insurance expert at Compare the Market, spoke about the dangers of being unprepared for natural disasters.

“When talking about natural disasters, many people often think of events such as tsunamis, hurricanes and volcanic eruptions,” Mr Zeller said.

“However, many people fail to realise that the flooding, bushfires, droughts and even extreme temperatures are considered natural disasters, too.

“Each and every one of these disasters has the potential to displace hundreds, if not thousands, of people from their homes and can strike without any warning.

“Sometimes being able to get out or being cut off from help can be counted in minutes rather than hours, which we saw with some of the flooding on the east coast of Australia earlier this year.

“It’s always smart to have an emergency plan in place which may include escape plans, temporary accommodation, medical supplies and documents in watertight packaging, even for those who think they may not need them.

“It may also pay to have home and contents insurance, especially for those items which you may not be able to move quickly, in the case of an emergency.

“Those few extra minutes saved by having a plan in place with important documents, emergency items and financial protection ready can save a life.”

It can be a frantic time trying to sort through important documents, family heirlooms and sentimental items to save in case of an unexpected natural disaster. With the stress compounded by sometimes impossible time limits, it can be hard to save everything that you might have liked to. This is why home and contents insurance may be right for you, in being able to replace items that you might have no choice but to leave behind.

[3] Our World in Data, Total economic damages from disasters as a share of GDP,  https://ourworldindata.org/explorers/natural-disasters?time=2011..latest&facet=none&Disaster+Type=All+disasters&Impact=Economic+damages+%28%25+GDP%29&Timespan=Annual&Per+capita=false&country=~OWID_WRL

[5] Our World in Data, Number of deaths from disasters, https://ourworldindata.org/explorers/natural-disasters?time=2011..latest&facet=none&Disaster+Type=All+disasters&Impact=Deaths&Timespan=Annual&Per+capita=false&country=~OWID_WRL