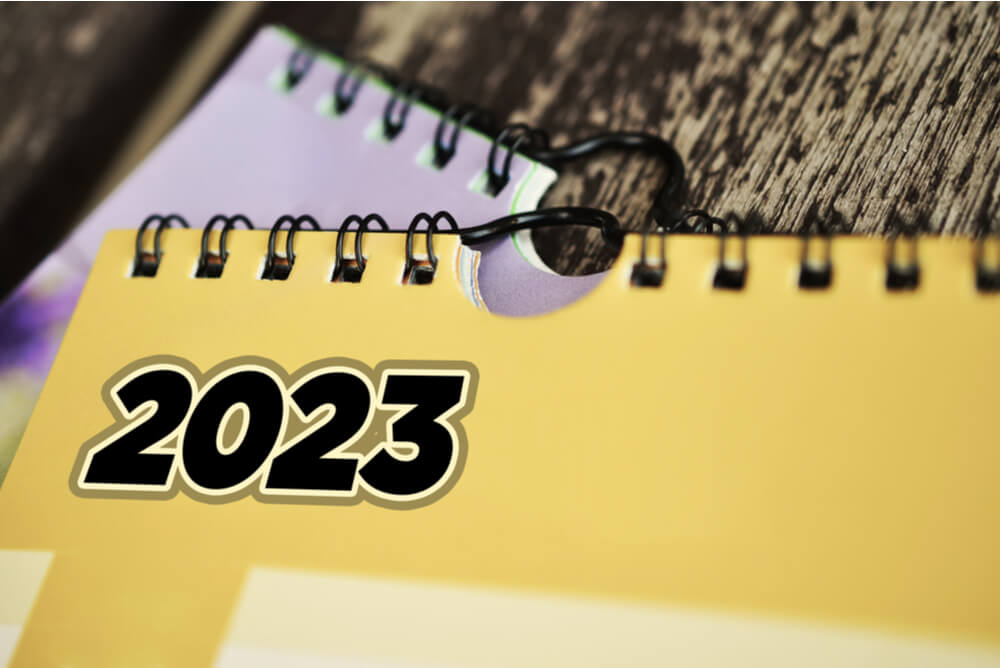 It’s the question hopeful homebuyers are banking on: when are property prices going to drop?

According to new forecasts by three of Australia’s big four banks, house affordability is likely to get worse next year before it gets better in 2023.

Commonwealth Bank, ANZ and Westpac have all updated their predictions, with each expecting another year of moderate growth in 2022 before prices correct slightly the following year.

This follows an enormous annual gain of 22% in capital cities, which according to REA Group data business PropTrack is the third-highest rate of growth since 1880.1

The table below shows what each bank predicts will happen to house prices in the next two years – NAB is yet to announce a revised forecast of its own, although it has previously predicted a 5% national increase over 2022.2

As the figures below show, if these forecasts are correct then prices will still remain slightly above or slightly below their current record highs.

Commonwealth Bank (CBA) predicts a further 7% increase in dwelling prices throughout 2022, before prices drop by 10% in 2023 – the most substantial predicted decrease of all the major bank predictions.

According to CBA, 2022 will see a moderation in prices driven by “higher fixed mortgage rates, affordability constraints, and natural fatigue after a period of extraordinary price gains”.

In 2023, CBA predicts the Reserve Bank will take the cash rate to as high as 1.25% by the end of the year, leading to an ‘orderly’ correction.

“The Australian housing market is in the twilight of an incredible boom that has been fuelled by record-low mortgage rates. The phenomenal lift in prices is not over yet given dwelling prices are still rising briskly in most capital cities.

“But near-term indicators of momentum coupled with the recent move higher in fixed-rate mortgages suggest that conditions will moderate from here.

“Interest rates become a headwind on property prices if they are rising. That is the place we believe we are moving towards over the next two years given our expectation for the RBA to commence normalising the cash rate in late 2022.”

ANZ predicts smaller changes in dwelling prices, with values to rise another 6% from current levels in 2022 and fall 4% in 2023.

ANZ’s extensive report, ‘Australia’s Housing Rolling Over’ said Australia’s house price gains have peaked over the past year and won’t be repeated in 2022.

According to the report’s authors, ANZ Senior economists Felicity Emmett and Adelaide Timbrell, high household savings and savings buffers, rising mortgage rates, lending constraints and a large increase in stock on the market will all lead to a slowing down of runaway price growth.

However, ANZ doesn’t predict quite as many cash rate increases as Commonwealth Bank, only expecting the RBA to start raising the cash rate by mid-2023.

“The recent weakness in housing finance suggests that price growth will slow over coming months.

“We see the RBA on hold until H1 2023, but fixed mortgage rates are already rising. A faster-than-expected rise increases the risk that prices slow more than we currently expect.” 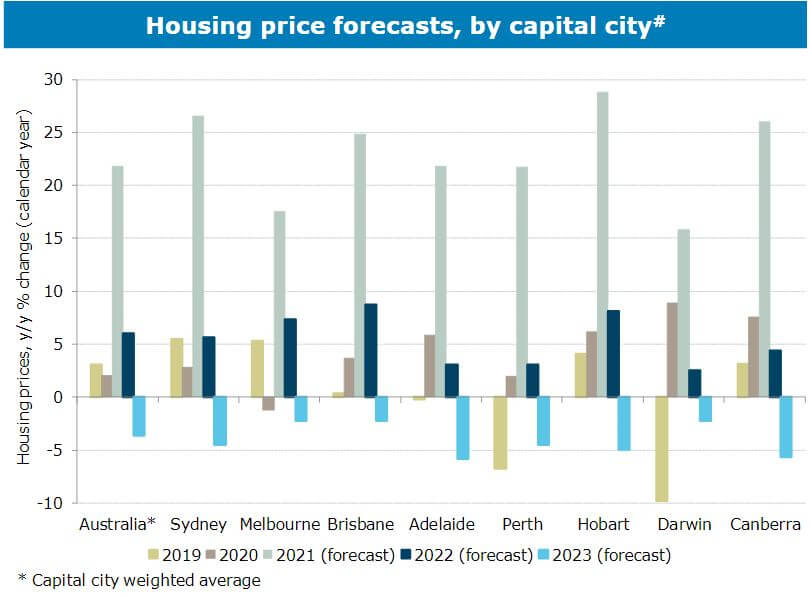 According to Westpac, the correction in 2023 will again coincide with a rise in official interest rates.

“As always, there are many moving parts to the price outlook as the boom enters trickier territory,” Westpac’s Chief Economist Bill Evans said.

“The main ones relate to affordability – which is becoming stretched – and policy tightening by both the Australian Prudential Regulatory Authority and the Reserve Bank.

“The wild cards are around investor activity and potential impacts from an extended period of slow population growth.

“But for now, the market has weathered the latest COVID disruptions very well and price momentum has held, prompting us to revise up the near-term outlook for prices before a correction phase begins in 2023 and likely extends into 2024.” 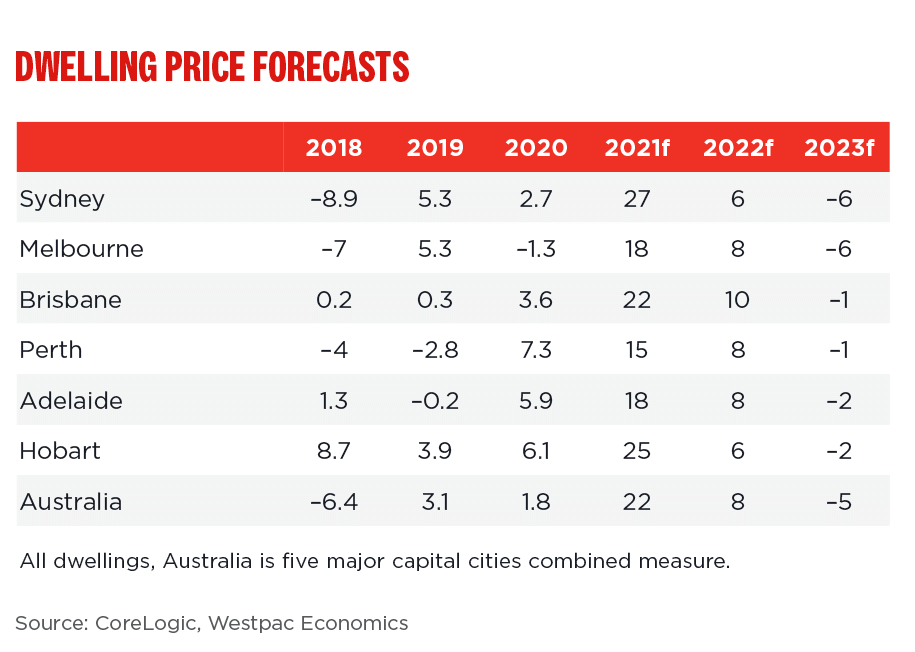 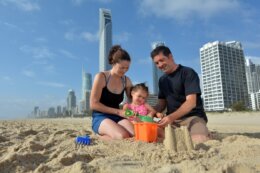