It might be time to hit the books and refresh on that geography class, according to the latest Compare the Market survey. We quizzed 2,700 American and Australian adults on international flag recognition and discovered an ocean-wide knowledge gap to be filled.

Across the United States, the results were less than promising. When shown an image of a flag with four subsequent options for the country it belongs to, Americans either got the answer wrong or blatantly admitted they did not know for the vast majority of them.

The people most in need of brushing up their knowledge are North and South Carolina locals as both states rated in the top five most incorrect answers across all the questions asked. Arizona and Delaware residents might also need to hit the books as these two states also made the cut for least knowledgeable on flags. 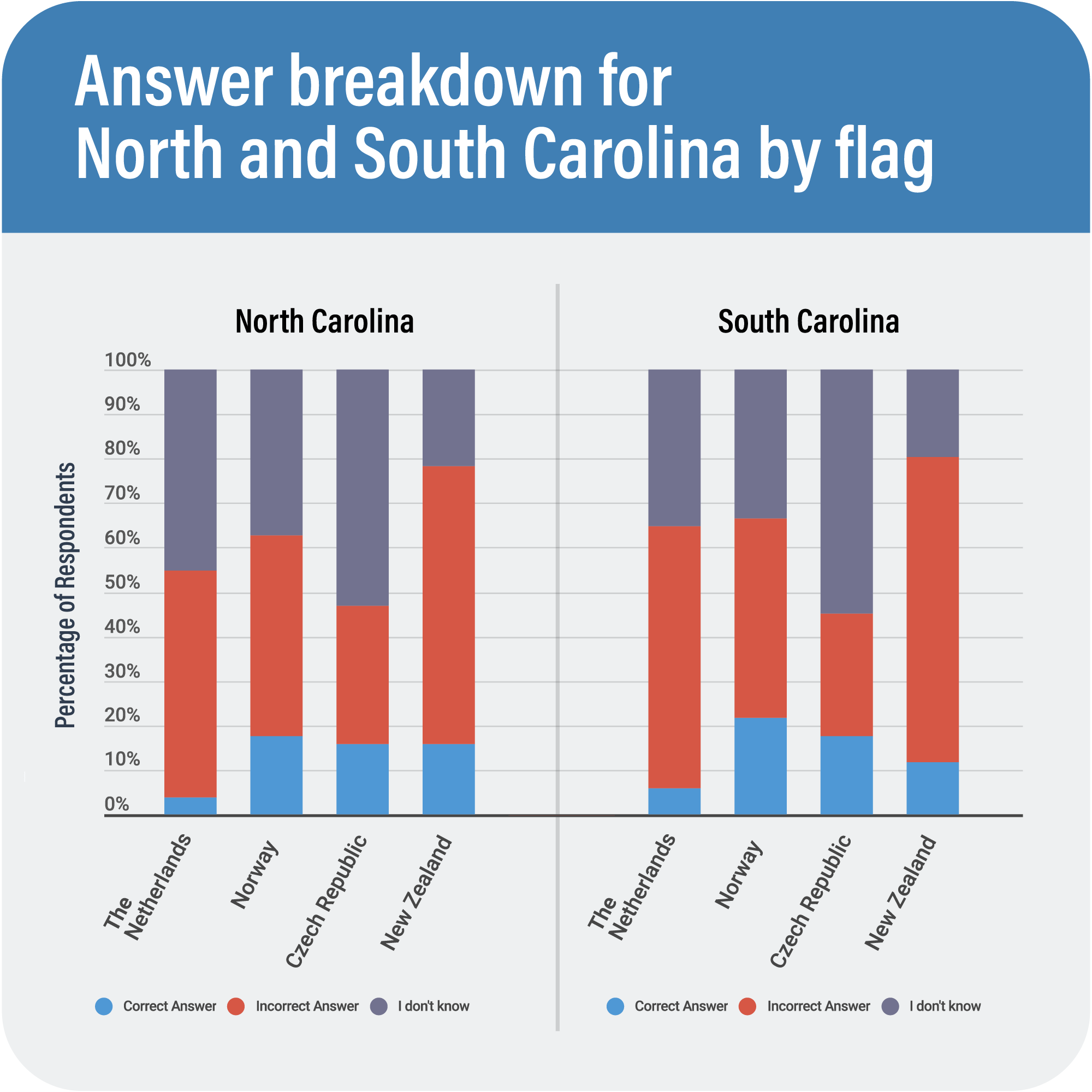 It may be best to hold off on the Dutch courage

The first flag we presented to respondents was that of the Netherlands – which is often confused with the flags of France, Russia and Luxembourg.

Overall knowledge on the Dutch flag was pretty dismal with only 12.35% of people across America correctly identifying it.

Connecticut proved to be the most knowledgeable state, despite only one in every five people being able to correctly identify the flag. To further add salt to the wound, more than half of Maine locals (56.25%) thought the flag was French and just over 45% of people from North Carolina admitted that they had no idea.

Age didn’t account for a difference in answers either, as all age groups thought that the flag was French, by quite a convincing margin. 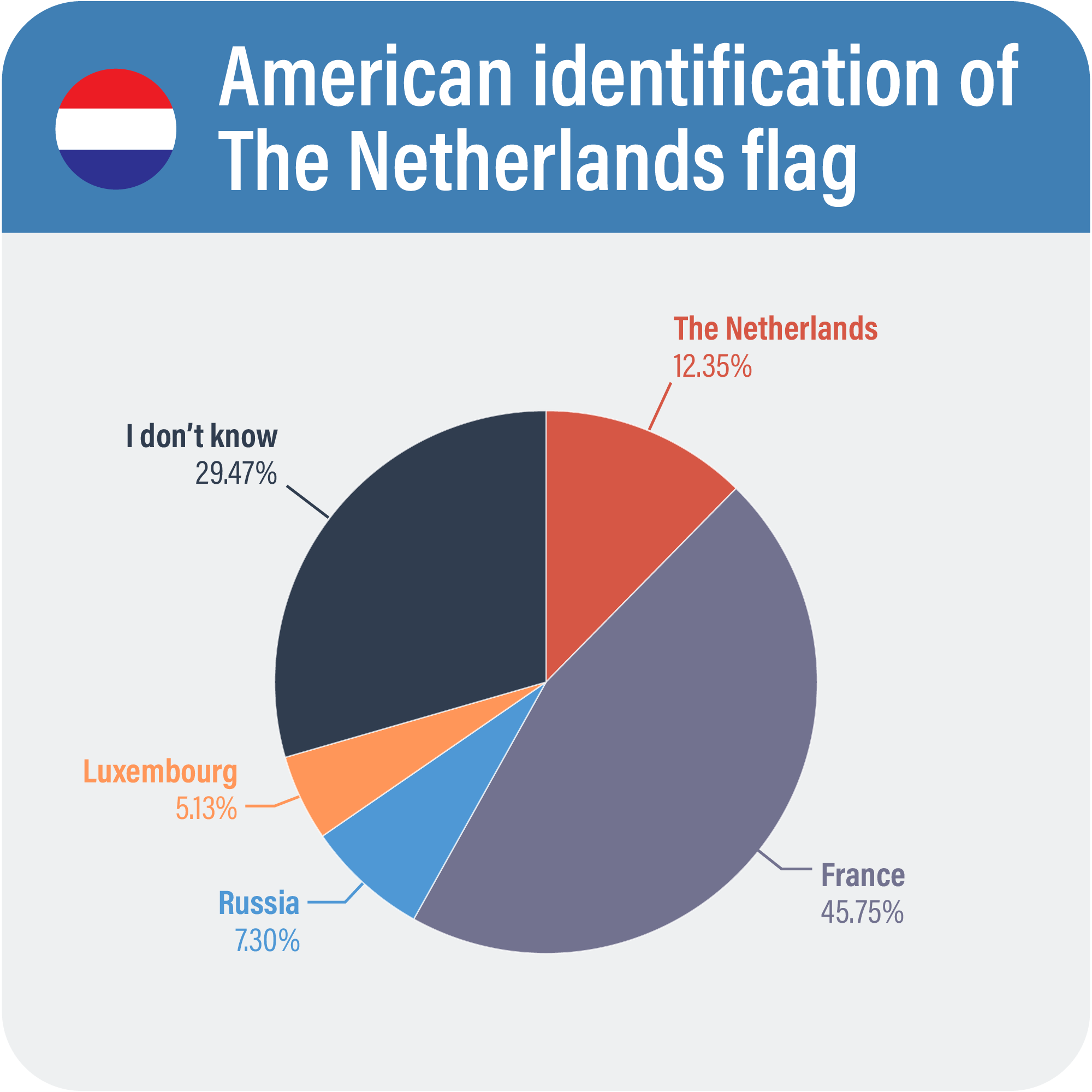 Heading up to the North of Europe we see scores start to improve but still just less than a third (30.88%) of Americans were able to correctly identify the Norwegian flag.

Unsurprisingly, Minnesota, who has the highest rate of Norwegian Americans living in the state,1 had the most people correctly identifying the flag at 51.92%.

There were however a few mix ups between the Nordic flags as 29.41% of Alabama locals thought that it was the Danish flag while Idahoans were almost equally convinced that it was the Swedish flag (27.45%). Arkansas was in two minds about the answer, as they couldn’t decide if the flag was Norwegian or Danish with 27.91% representing each answer. 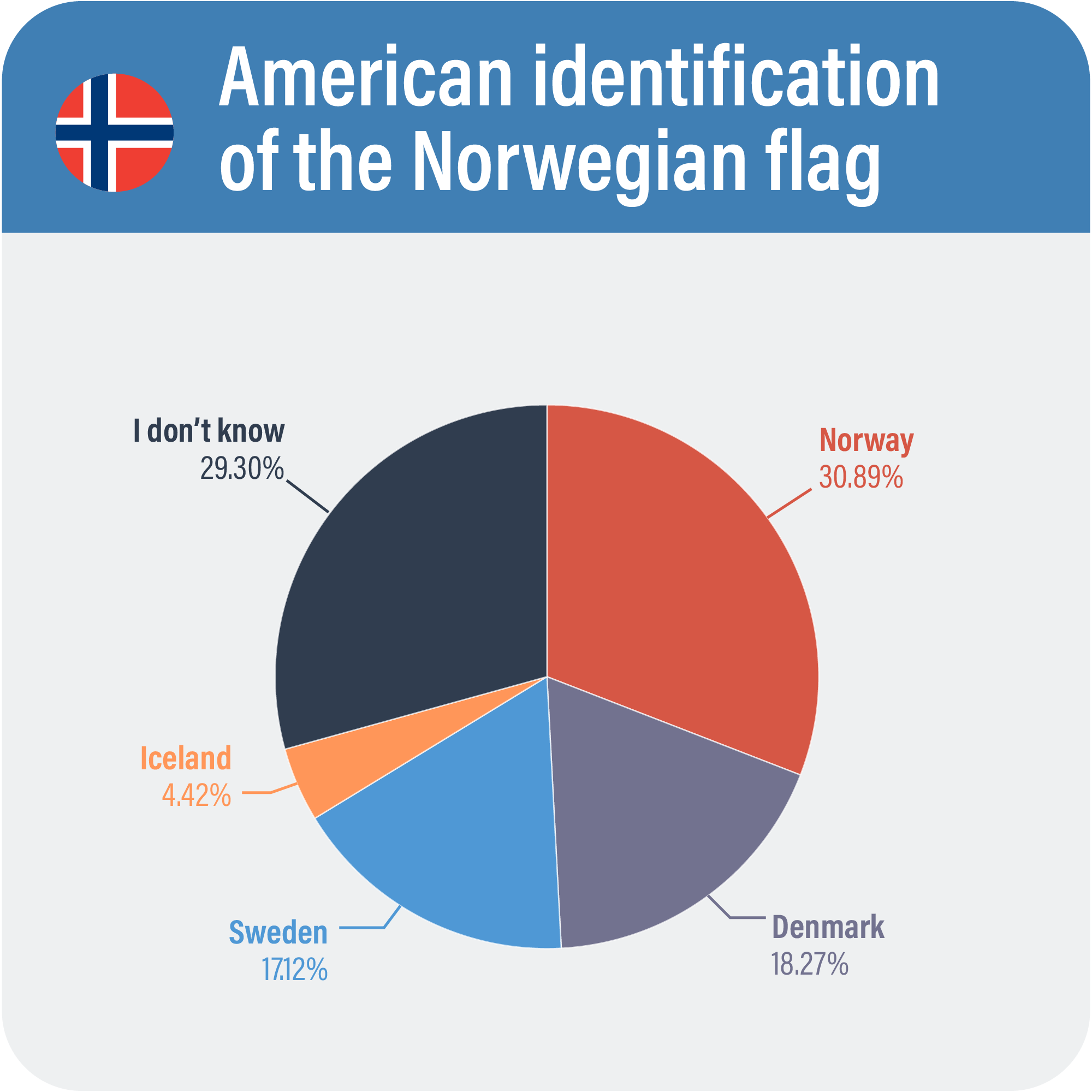 Can you double Czech that?

Americans performed the best when presented the Czech Republic flag, with one in three people correctly identifying it.

Again, Minnesotan locals knew their flags the best with 46.15% of participants getting the answer right.

Pennsylvania on the other hand could have used a map on standby, with two in three people indicating that they did not know the answer, and a further 12% choosing incorrect answers. 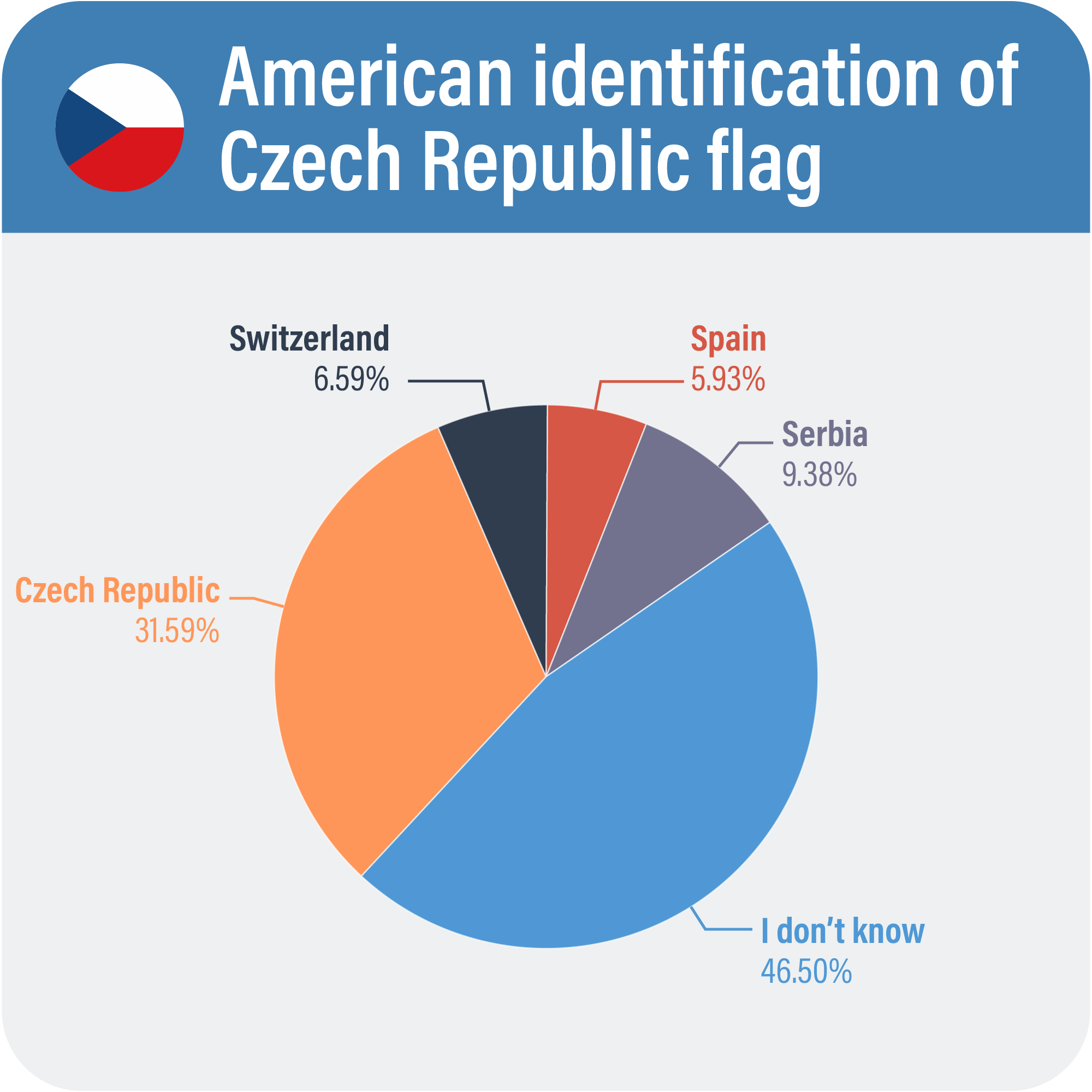 The black sheep of the family?

America may have allies spread throughout the world, yet it appears they can’t tell them apart. When asked to identify the flag of New Zealand, only 26.37% of the population were able to do it accurately.

On a state-by-state basis, Illinois locals got top marks with almost every two in five people identifying the country’s flag correctly.

As the worst performing state, South Carolina had slightly more than one in every ten participants correctly answer, while one in five Oregon locals thought that the flag was from New Zealand’s neighbour Australia. Surprisingly, almost half of the people (48%) surveyed from Tennessee were adamant that it was the United Kingdom’s flag. 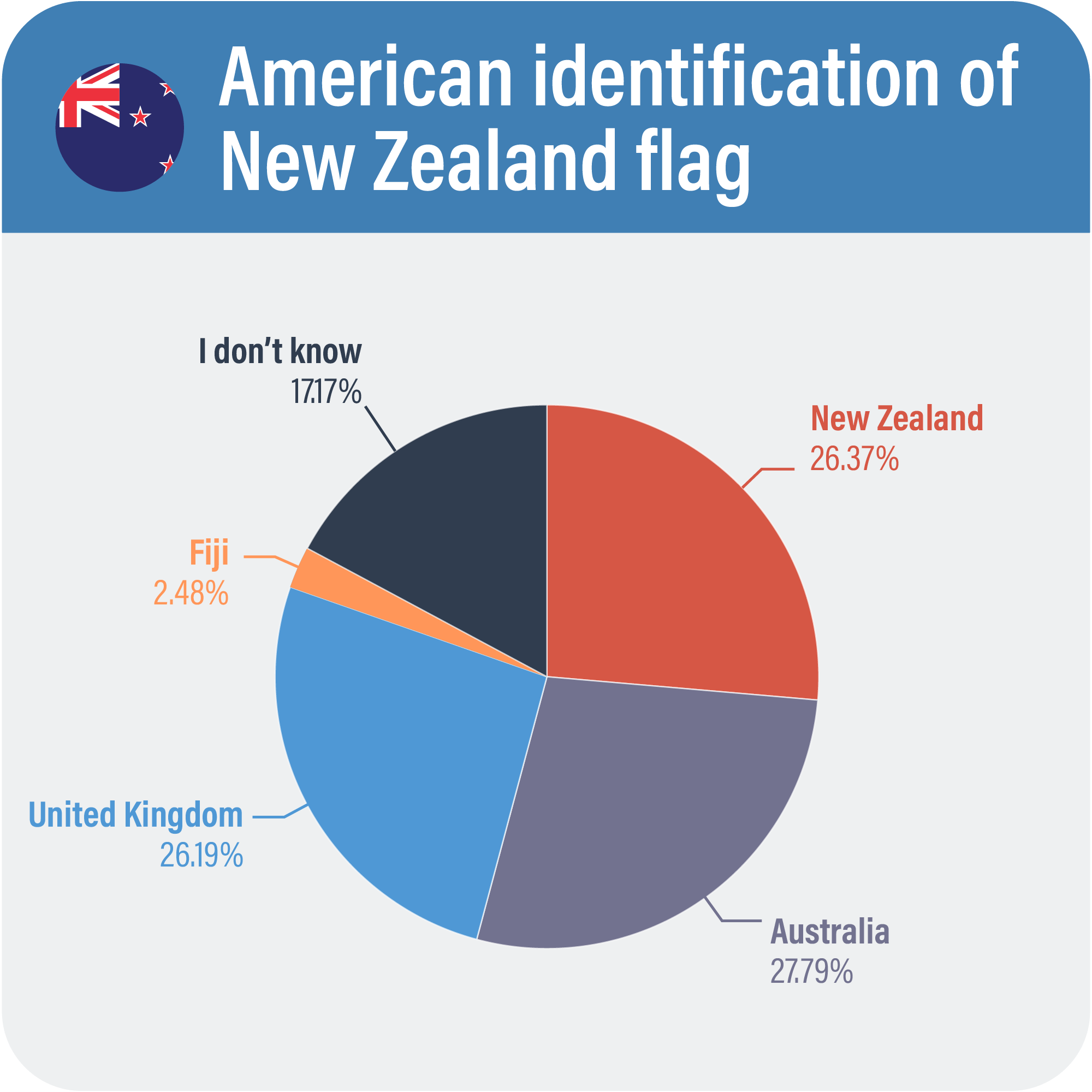 We also checked to see if there were any differences between the answers women and men provided. Females were generally more likely to admit that they did not know the answer than their male counterparts. Men outperformed women across the survey with a higher percentage of the participants getting the answers correct.

How does America compare to Australia?

It seems that Aussies know their geography (or at least their flags) a bit better than Americans, with just under a quarter (24.95%) of Australians correctly identifying the Netherland’s flag. That is not to say that Aussies shouldn’t hit the books, as almost half (47.90%) of people surveyed thought that the flag was French.

Scores were again higher in Australia than in America with 44.51% of people correctly identifying the Norwegian flag, but confusion still arose, with the same amount of people thinking that the flag belonged to another Nordic neighbour (Denmark, Sweden or Iceland).

Lastly, just over half of the people surveyed correctly identified the Czech Republic’s flag. However, over one fifth of participants indicated that they did not know the answer, the highest rate for any of the questions asked.

Embarrassingly, only 69.46% of Australians were able to identify the flag of their closest neighbour. Adding to the injury, over 15% of the people surveyed couldn’t tell the difference between their own country’s flag and New Zealand’s. 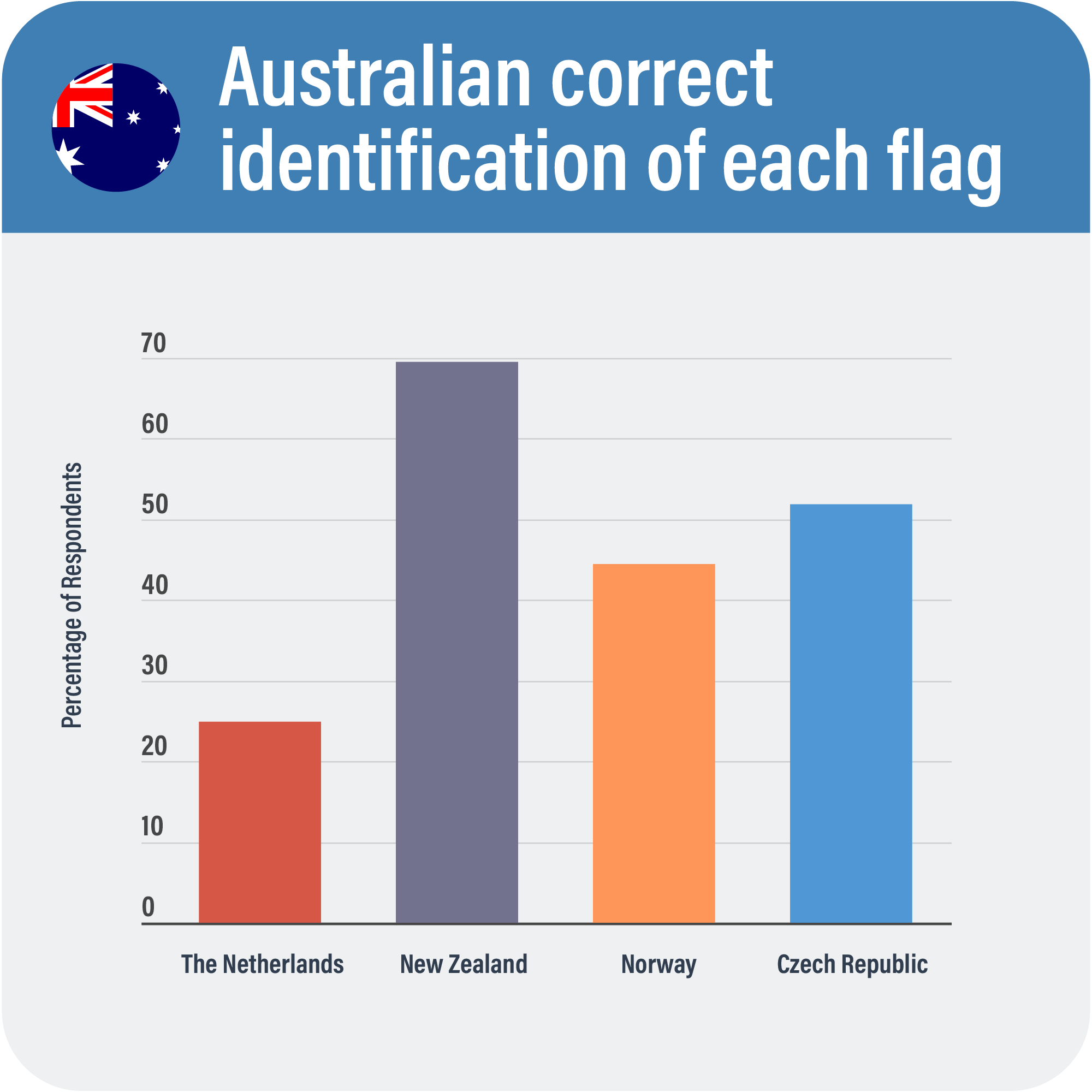 Where in the world do we go from here?

Some say that it’s better to admit when you don’t know something than to try and guess – we just hadn’t anticipated that the education system failed this many people! With luck, 2022 will bring in more opportunities to travel. We just hope that people (especially in North and South Carolina) brush up on their geography skills before booking an overseas holiday. Aussies, you might also want to brush up on your Kiwi knowledge (and slang) before you fly out. If you don’t, you might just end up on the other side of the world.

Compare the Market commissioned Google Surveys to survey 2,761 Australian and American adults throughout October and November 2021

Disclaimer: Responses from Alaska, Hawaii, New Hampshire, Rhode Island and West Virginia were not included in the above survey as there were not enough participants from these states to collect statistically significant data.

Brought to you by Compare the Market: Making it easier for Australians to search for great deals on Travel Insurance.