What factors influence the time of year that people travel?

Are you planning your next holiday for the warmer months, or simply saving until you have enough money for a trip? Whichever way you plan your travel, you’re probably not alone.

The travel insurance experts at Compare the Market have surveyed more than 2,500 adults across Australia and North America to understand people’s preferences and habits when they are planning a recreational trip, and the results are quite varied!

The world is slowly opening up thanks to some relaxation of COVID-19 travel restrictions and it seems that many people are rearing to go and take a well-deserved break. Expedia’s Traveler Value Index: 2022 Outlook found that 54% of people are looking to spend more on travel than they did prior to the pandemic.1

Furthermore, the research states that on average, Australians will be looking to spend $2,845 (US$2,050) on their next holiday, while Canadians are looking to fork out a similar amount of CA$2,567 (US$2,020). Americans were the biggest spenders of the 8 countries surveyed by Expedia, with an average of $2,353 being put towards a typical vacation.2

How do tourists plan their travel?

Before people can reach paradise and relax, oftentimes there are many nights spent looking for the perfect destination, cheapest prices, and best times of the year to take that all-important holiday. Our survey into travel habits found that people have some key considerations when planning for a holiday.

In Australia, the most common consideration (at 35.5%) was travelling to destinations at off-peak times, followed by having enough money to go places (30.5%) and travelling whenever people are able to get time off work (29.7%).

In North America, the main consideration for planning a holiday was having enough funds for a vacation (34.9% of Canadians and 40.9% of Americans). For Canadians, this was followed up by travelling to a destination for a specific season (31.6%) and the ability to travel whenever they are able to get time off work (28.3%). Travelling during the off-season (30.2%) and travelling for a specific season (29.2%) round out the top 3 for Americans. 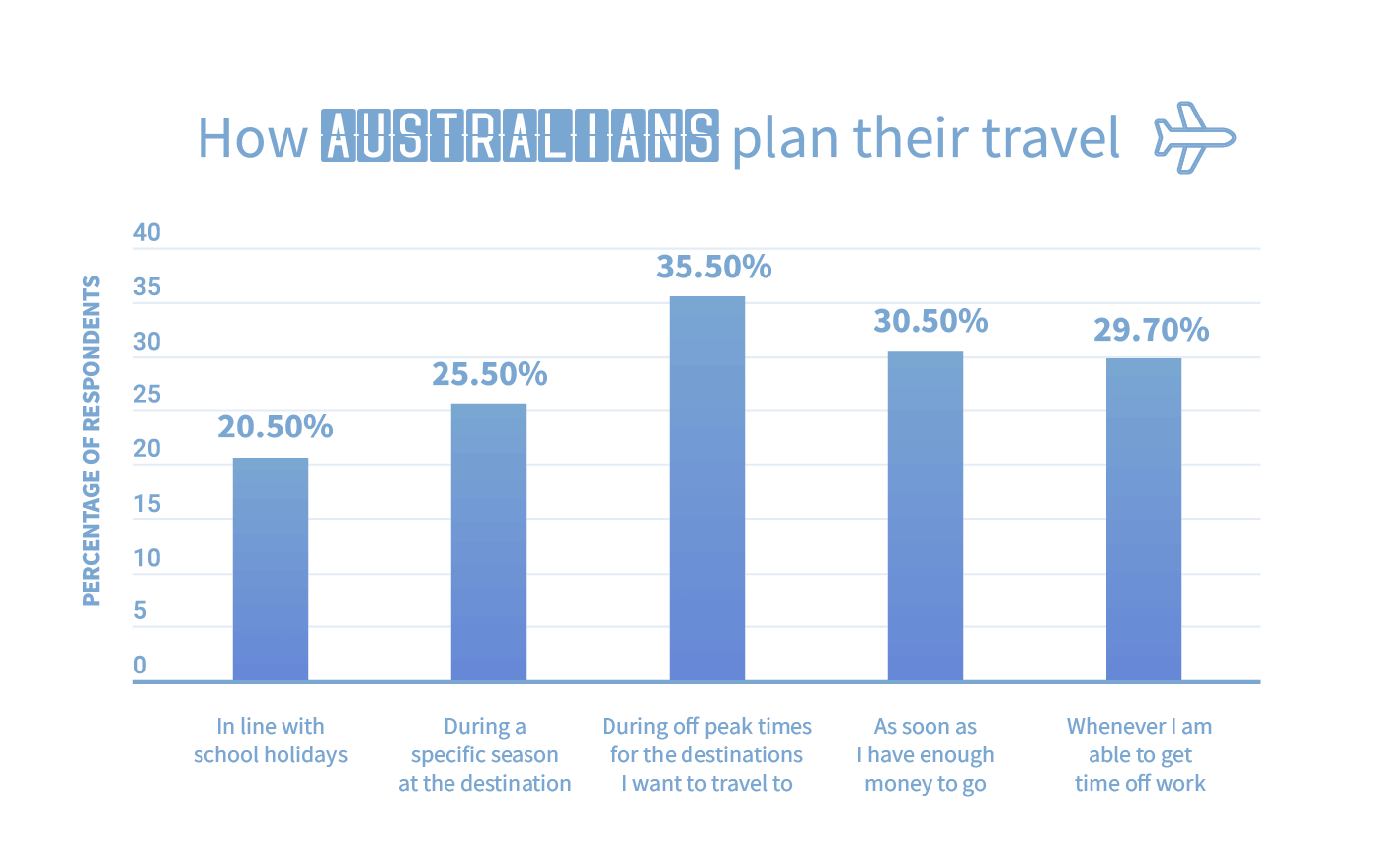 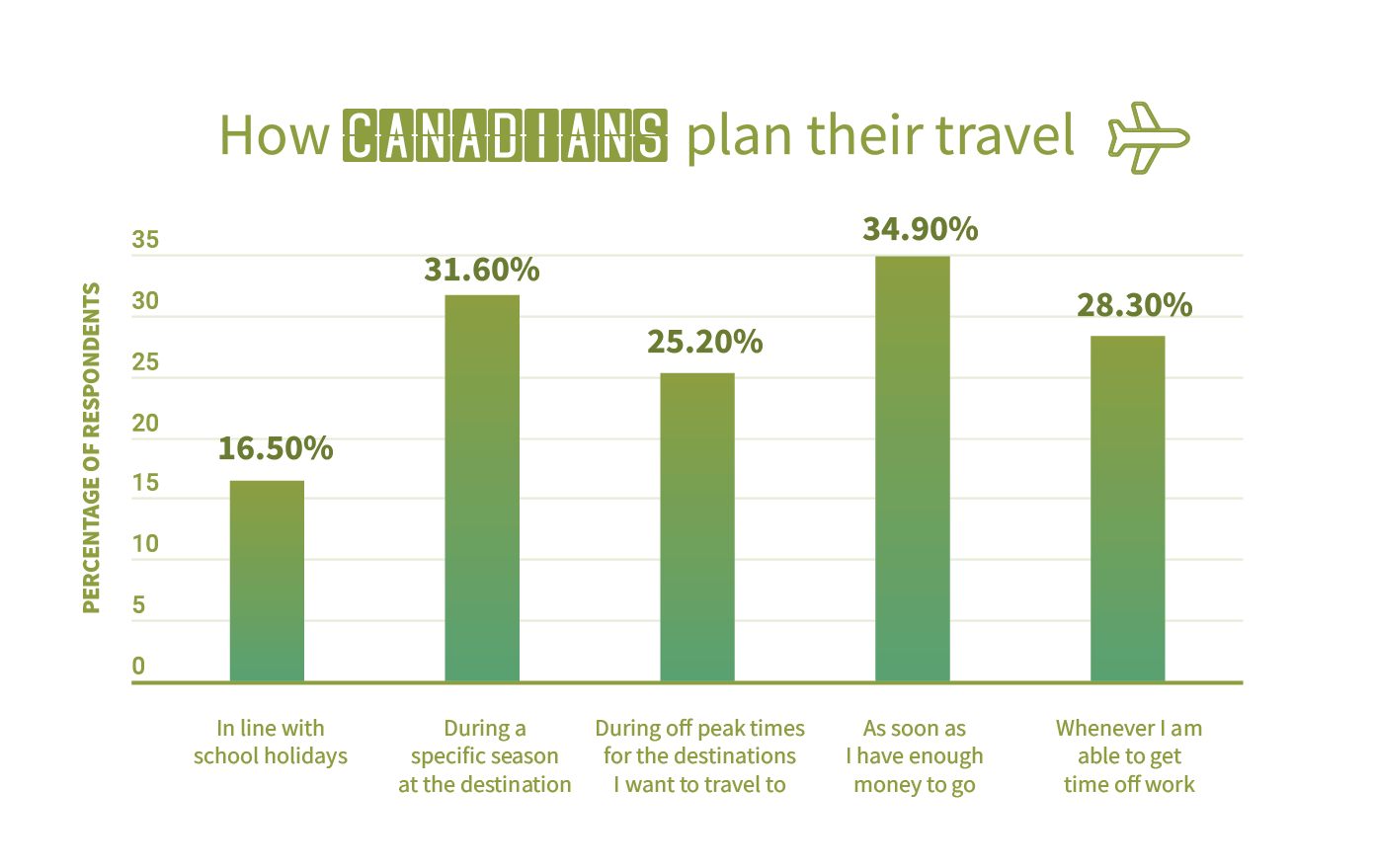 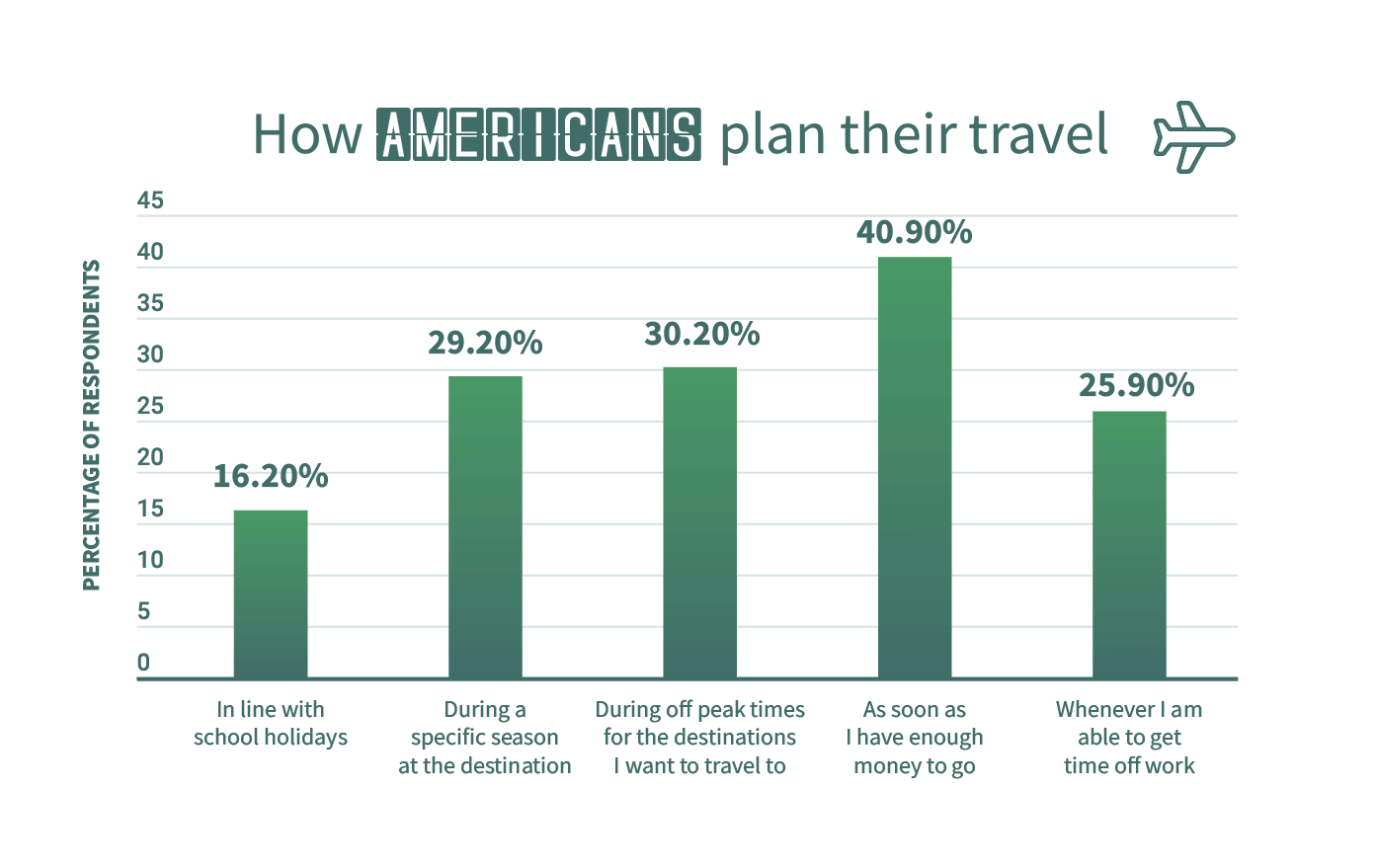 There also seems to be a stereotypical divide amongst the Australian age groups – the most common travel consideration for people aged 18-24 was having enough money to go on holiday. For those aged between 25 and 34, it was getting time off from work, while for Australians aged between 35 and 44 it was travelling within the school holidays. Those aged 45 and above preferred holidaying during off-peak times.

The majority of Americans aged between 18 and 54 opted for travelling once they had enough money saved, while the main concern for those aged 55 and above was to travel in the off-season. Canadians had the most variation across the board – 18-24-year-olds and those over 65 mainly preferred destinations in a specific season, whereas people aged 25-44 and 55-64 mainly wanted to go on a holiday as soon as they had the money. Those aged 45-54 were simply looking to go on a holiday when they were able to get time off work.

The percentage of people who plan their travel around the seasons

Whether it’s experiencing the Northern lights in the middle of winter or sun tanning at Bondi Beach in summer, seasons can play a huge part in how someone experiences a new place for the first time. This is why we wanted to know whether people thought seasonality played a large role when planning a vacation.

Out of those who travel, over 84% of Australians and Americans put at least some consideration to the season at their destination.

This number increases to over 88% for Canadians; and who could blame them, when most of the country is in perpetual winter for much of the year! 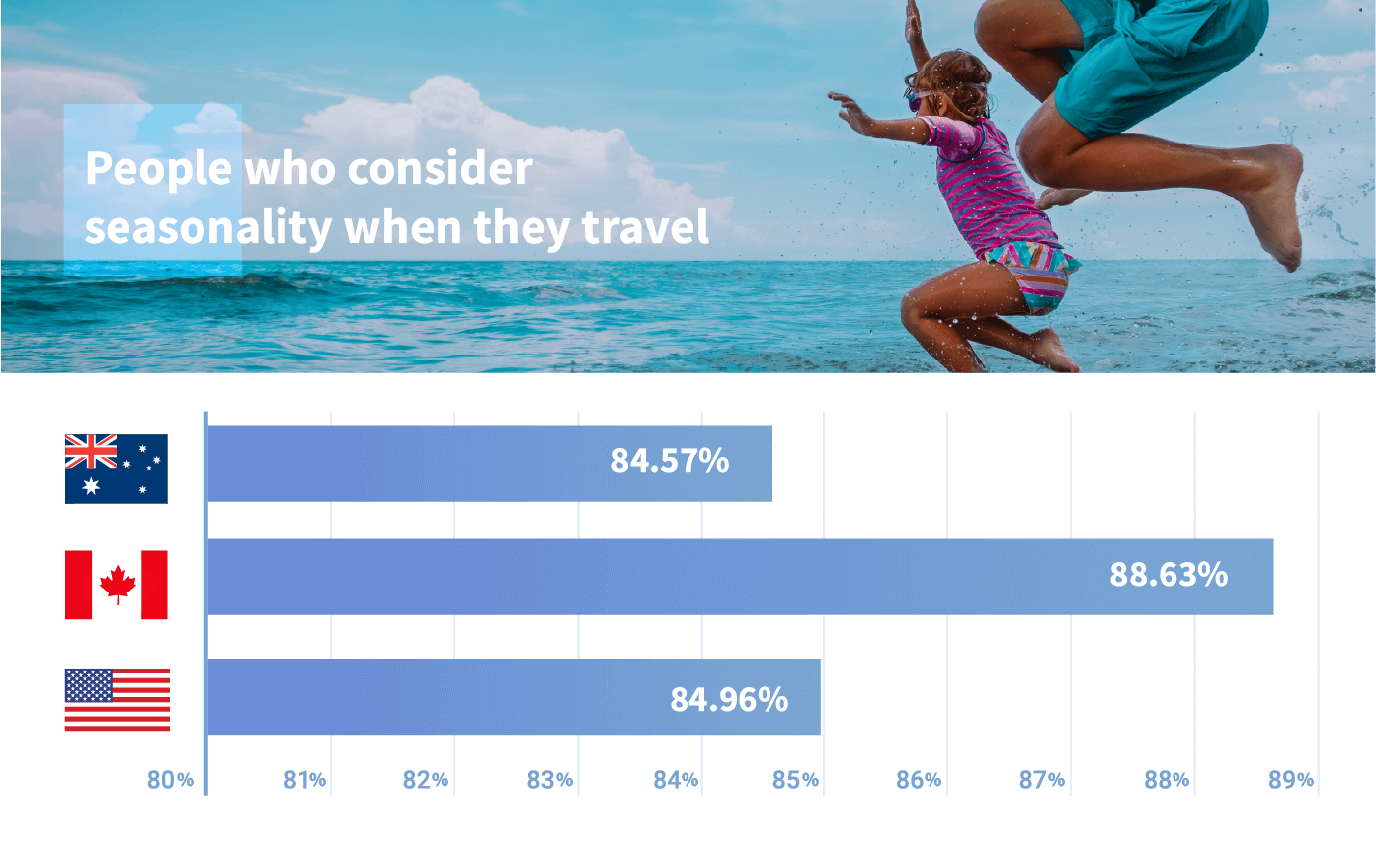 We also wanted to know if people travel to avoid a specific season in their home country. The results were surprising, with 32.26% of Australians and 37.77% of Americans looking to travel to avoid a particular season. At a much higher rate, 51.86% of Canadians also look to do the same. 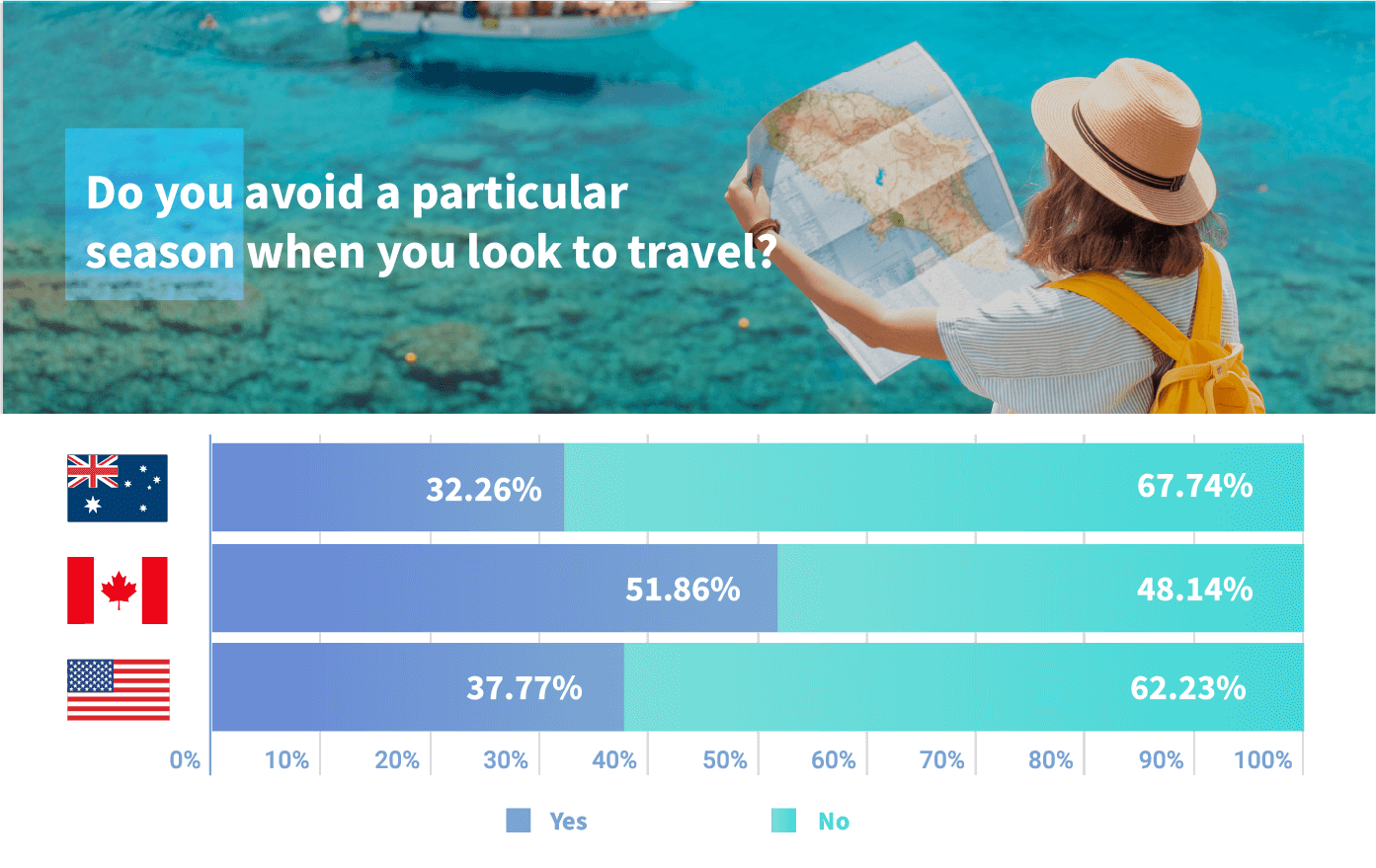 Our survey also explored the preferred season for travellers to take a holiday. Hands down, summer was the all-around winner, with 34.25% of Australians, 56.12% of Canadians and 42.22% of Americans preferring a vacation in the sun. For many Australian travellers (31%), holidaying in spring was quite a draw card while Canadian (11.99%) and American (19.48%) travellers were not as enthused about seeing locations come to life after the long winter months. 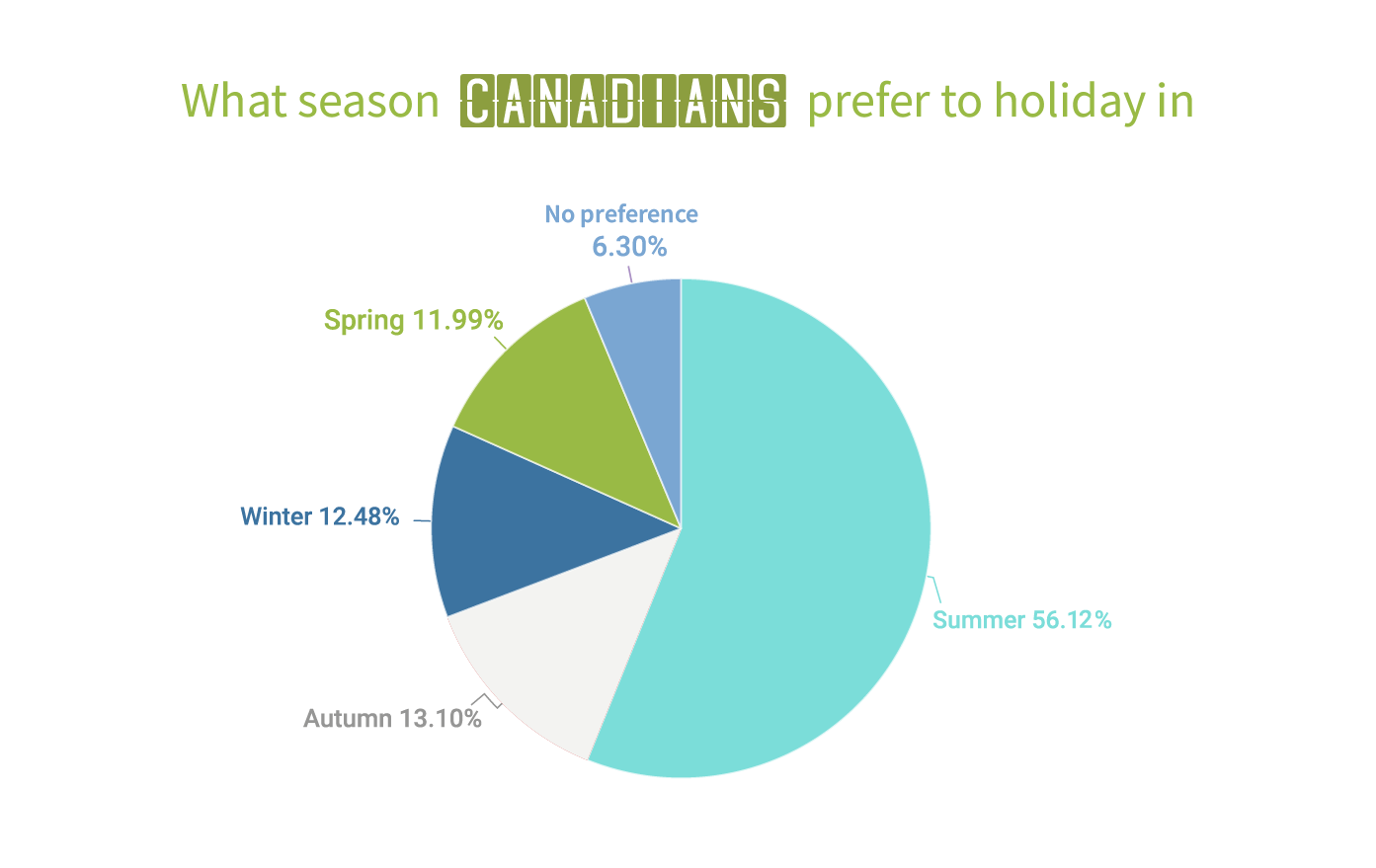 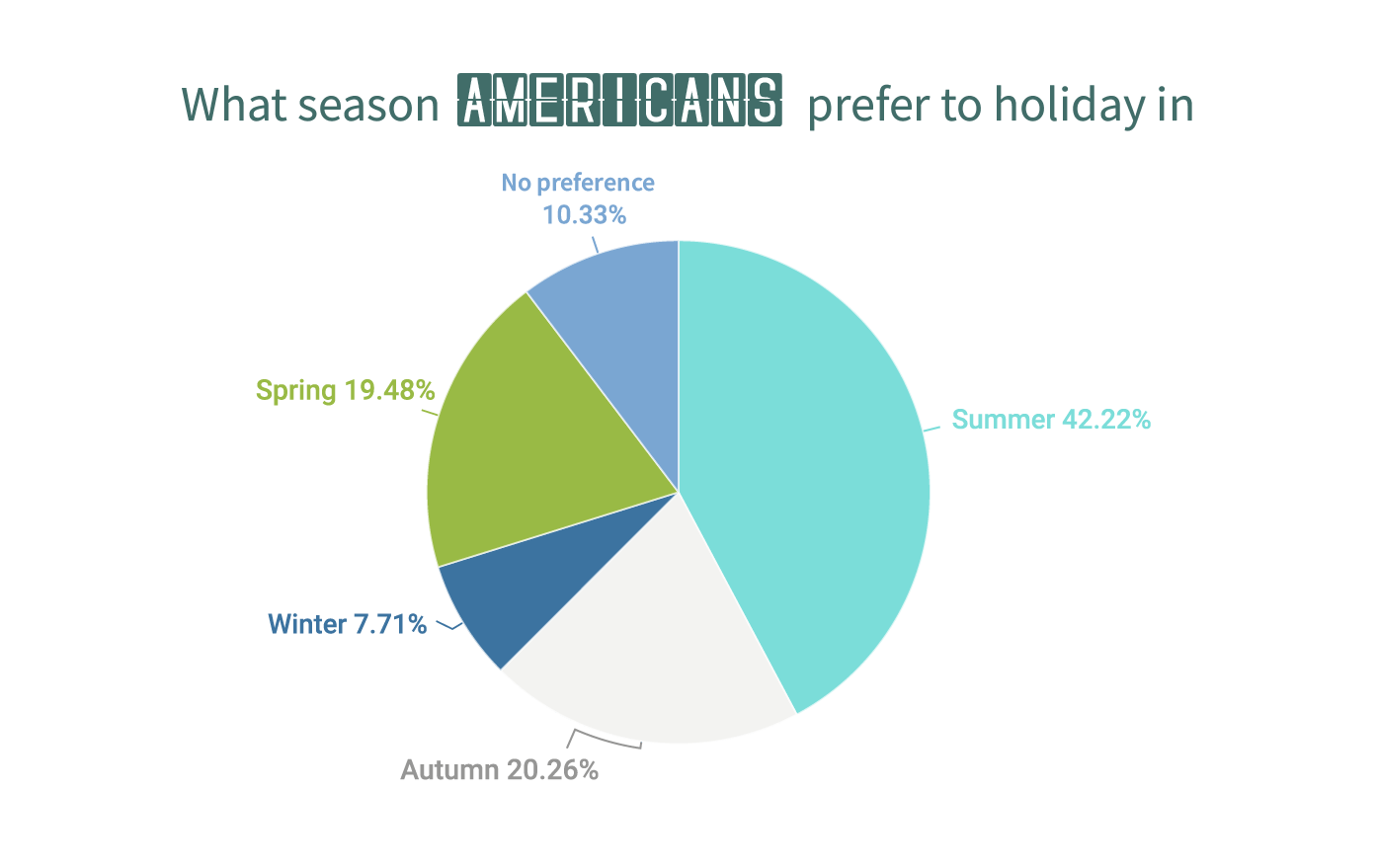 The number of people who have travelled uninsured

We’ve all been told what’s good for us, but how many of us have actually taken that advice? While travel insurance may not be the first thing that comes to one’s mind when planning a trip, having some sort of financial support to help when things go from great to awful can ease some of the added stress.

Our survey found that Americans are leading the board by being the biggest risk takers, with a whopping 74.72% of respondents admitting to going on a trip uninsured.

Australians come in second, where just more than half (54.76%) ‘roll the dice’ and hope nothing will happen while abroad, while a slightly more modest number of Canadians (48.3%) have also gone on a trip uncovered. 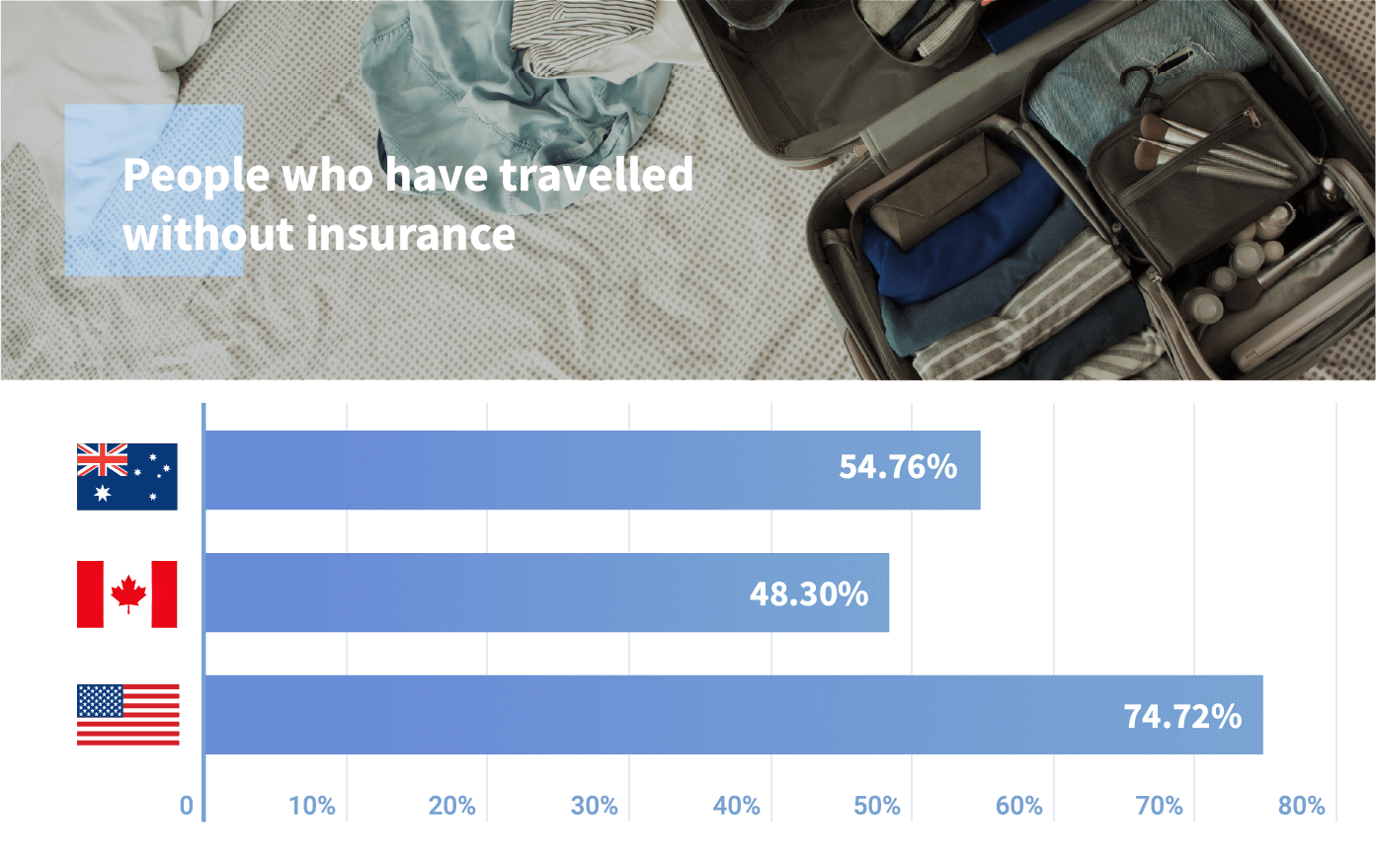 15% of respondents who have travelled without insurance have come to regret it.

Men in Australia and America were more likely to regret their decision, while it was their female counterparts in Canada that had the most remorse.

“Now more than ever, people are looking to take a holiday to recuperate and experience the world, given the lockdowns that have happened in the past two years,” Mr Zeller said.

“While our research shows that people generally look to take their vacations in the summer, many places offer a variety of different experiences for the different seasons.

“We all seem to know a place for one reason, like going to Switzerland to ski the Alps, or visiting Ibiza for its great beach parties, but many of these destinations offer alternative adventures which can only be experienced in off-seasons.

“There’s so much of the world that’s there for us to discover, whether locally or internationally, that can cater to what we want and need at different times of the year.

“However, it’s important to remember that sometimes things don’t always go to plan, and it’s a good idea to be prepared in case something does happen, such as having travel insurance.”

You never know what might happen next while you’re on your holiday, whether that be an injury, illness, or cancelled flights, so it’s worth ensuring that you are covered in case the unexpected does happen. Travel insurance may help you with costs associated in the event you are sick, or have lost or stolen goods. So, while you’re planning your next holiday, it may also be beneficial to consider a travel insurance policy to assist you if things go south.