Which Disney characters are people around the world Googling the most?

There’s no denying that the Walt Disney Company has been a pioneer of cinema and animation for decades, having created many iconic and beloved characters over time. Not to mention the six resorts located across the world, including the Walt Disney World Resort in Florida, which this year celebrates 50 years since its opening.

Disney’s acquisitions are also as well known as its own productions, with the likes of Marvel Studios, Lucasfilm and Pixar Animation Studios all joining the ranks over the years.

With so many films, characters and franchises now under their belt, we wondered which of Disney’s extensive list of characters is the most searched on Google in 120 countries around the world.

To keep things simple, we’ve stuck to just five franchises: Disney Princesses, Marvel superheroes, Star Wars, Pixar and Mickey Mouse characters. We’ve also stuck to just the movies in each category, so don’t go expecting an appearance from everyone’s favourite baby green alien in the Star Wars data. We plugged a list of characters from these categories into a search volume program to see which ones are the most searched in each country. Read more about our methodology below.

Do you agree with your country’s favourite character? 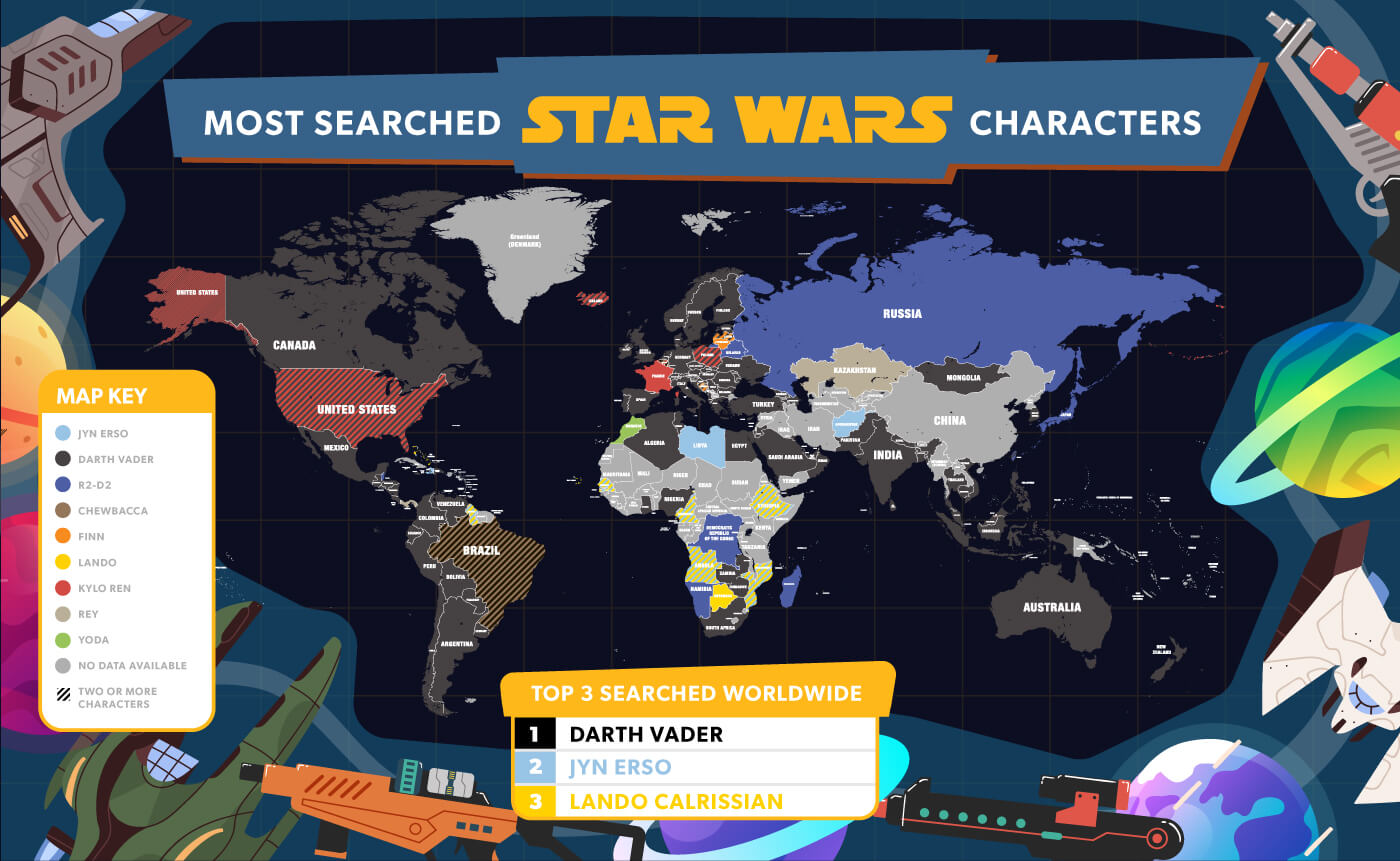 The most searched Star Wars characters around the world

It’s not difficult to discern which Star Wars character is everyone’s favourite; the search term ‘Darth Vader’ absolutely dominated around the world, snapping up a total of 95 out of 120 countries. No other character came close to balancing the Force; the term ‘Jyn Erso’ came in second with just eleven country wins.

Of course, this isn’t taking into account the characters from the various Star Wars TV series. If we had included the search term ‘baby Yoda’ in our data, for instance, the results could’ve been very different. Just out of interest, we decided to compare the global search volumes of the film characters we included to those of the little green alien that took the world by storm – who consequently smashed into first place with the most convincing win we saw in our data. The term ‘baby Yoda’ is sitting at a comfortable 3,350,000 searches per month (as of May 2021), which is more than double the search volume of the term ‘Kylo Ren’ in second place (1,400,000 searches per month).

When we organised the characters according to their era (prequels, originals and sequels, with the Rogue One crew being classified as sequels), the results showed that not a single prequel character won any countries – a vindication perhaps for those fans that disowned the prequels, but a blow for those of us who actually like them. With the massive volume of searches for the term ‘Darth Vader’ behind them, the originals achieved the most country wins, with an original character taking out the top searched title in 117 countries. 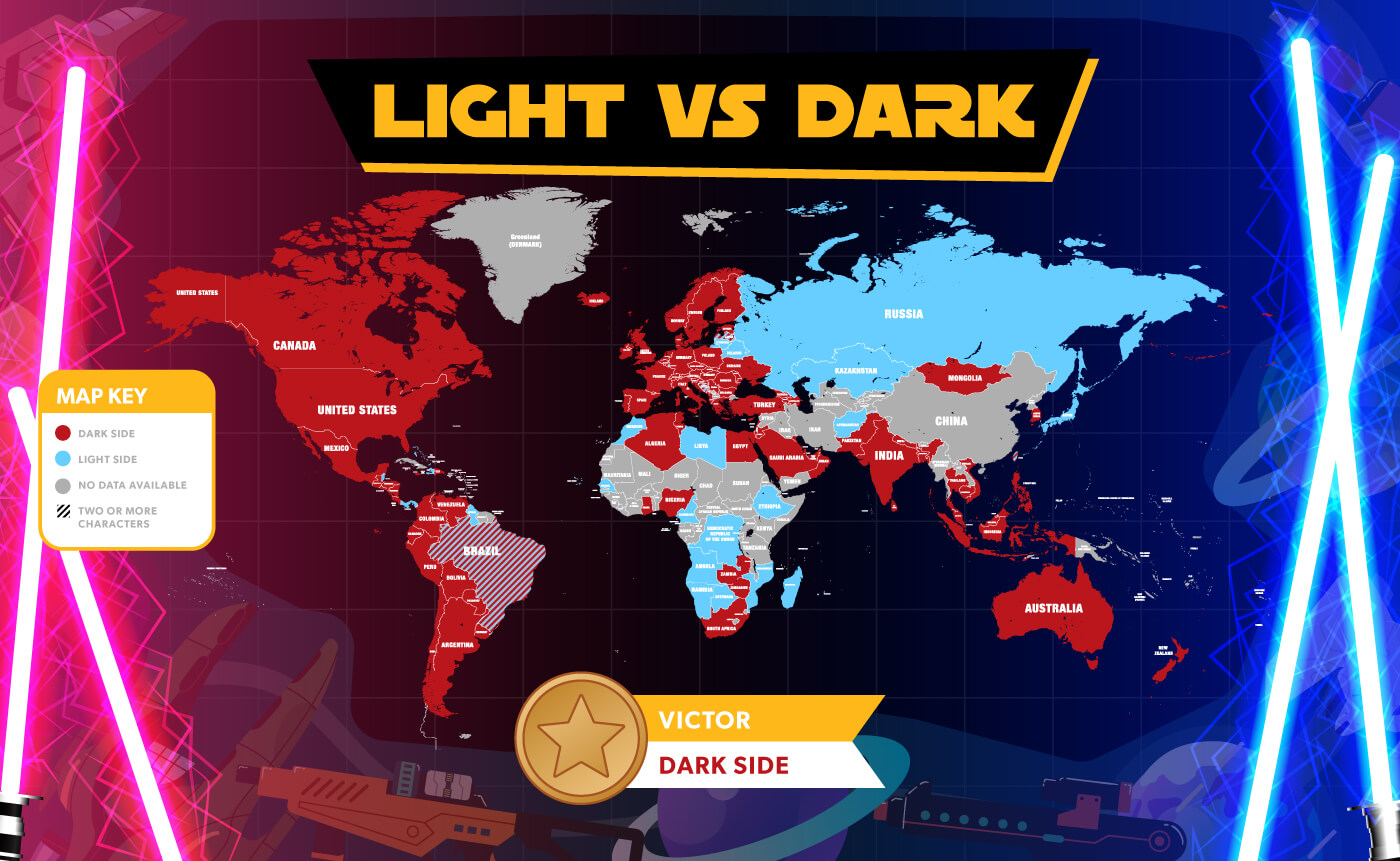 The most searched Star Wars characters: Light vs Dark

We also decided to break down the Star Wars results by Light vs Dark Side, and what we found was fascinating! Despite 24 of the 35 Star Wars characters we looked at belonging to the Light, the Dark Side won a total of 101 countries, largely thanks to the search term ‘Darth Vader’. In fact, the terms ‘Darth Vader’ and ‘Kylo Ren’ were the only two Dark Side characters to win any country’s most searched title, but the sheer volume behind the OG Star Wars villain gave the Dark Side the edge over the others.

Hopefully, this doesn’t mean that the world is falling to the Dark Side! 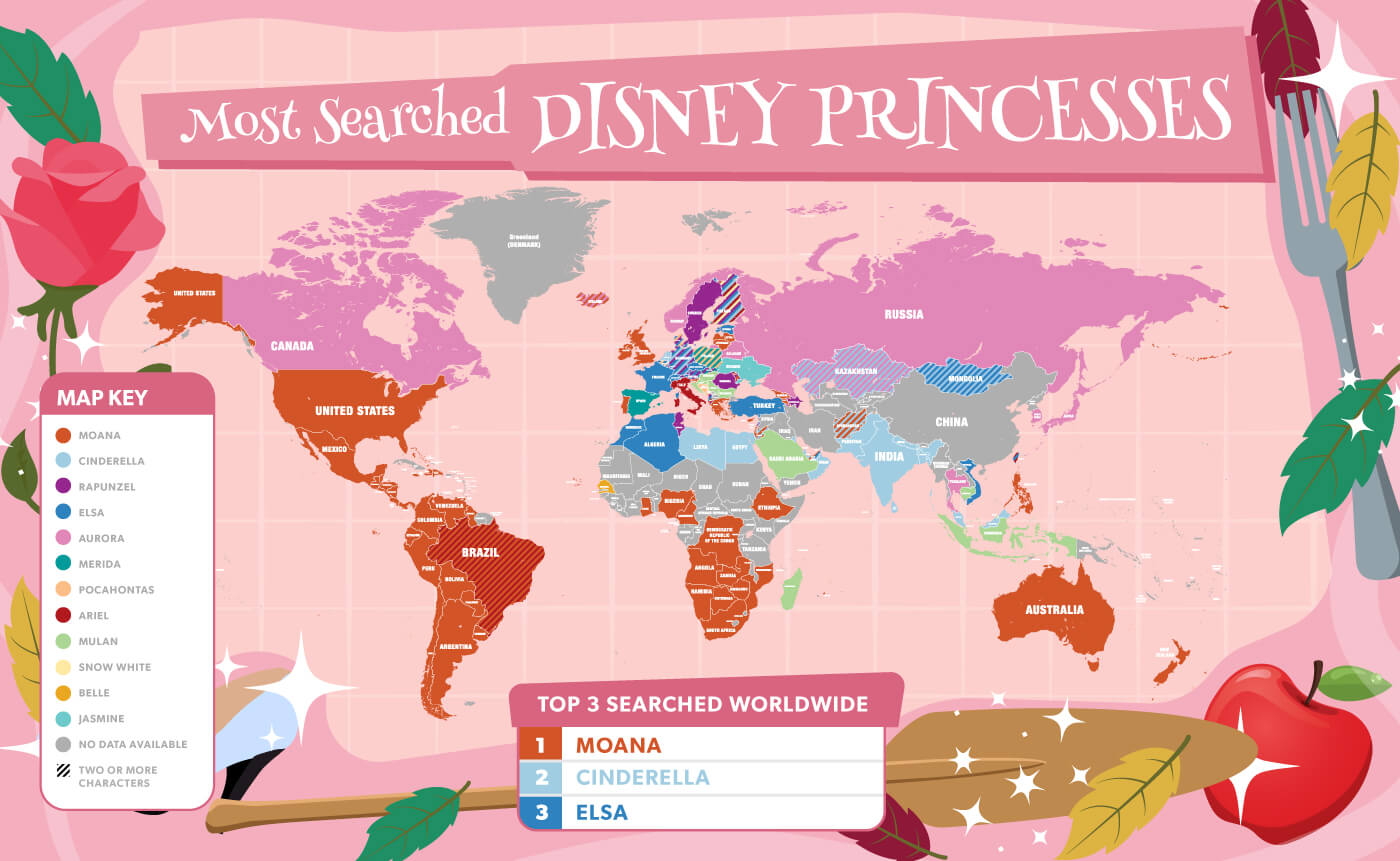 The most searched Disney Princesses around the world

The search term ‘Moana’ came out on top in more than 50 countries, making this Disney Princess the most searched in the world. Second place goes to the search term ‘Cinderella’, which took out 20 countries.

The most extraordinary thing to come out of our Princess data, though, was the five-way tie in Finland – the search terms ‘Cinderella’, ‘Ariel’, ‘Pocahontas’, ‘Rapunzel’ and ‘Elsa’ all nabbed the top spot in the Nordic country!

We also decided to organise the Princesses by the era they’re from:

This could help us see which era has the more popular characters (in terms of search volume). It turns out that the new Princesses have the upper edge over their predecessors, with the early Princesses coming in second. The 90s Princesses trailed behind all the rest – a big blow to those of us who grew up with those characters. In fact, the new Princesses won more than three times the number of countries that the 90s ones did.

The most searched Marvel superheroes around the world

Outside of those two, though, not many superheroes get a look in. The search terms ‘Black Panther’, ‘Iron Man’, ‘Thor’, ‘Hulk’ and ‘Vision’ nabbed only a small handful of countries each. 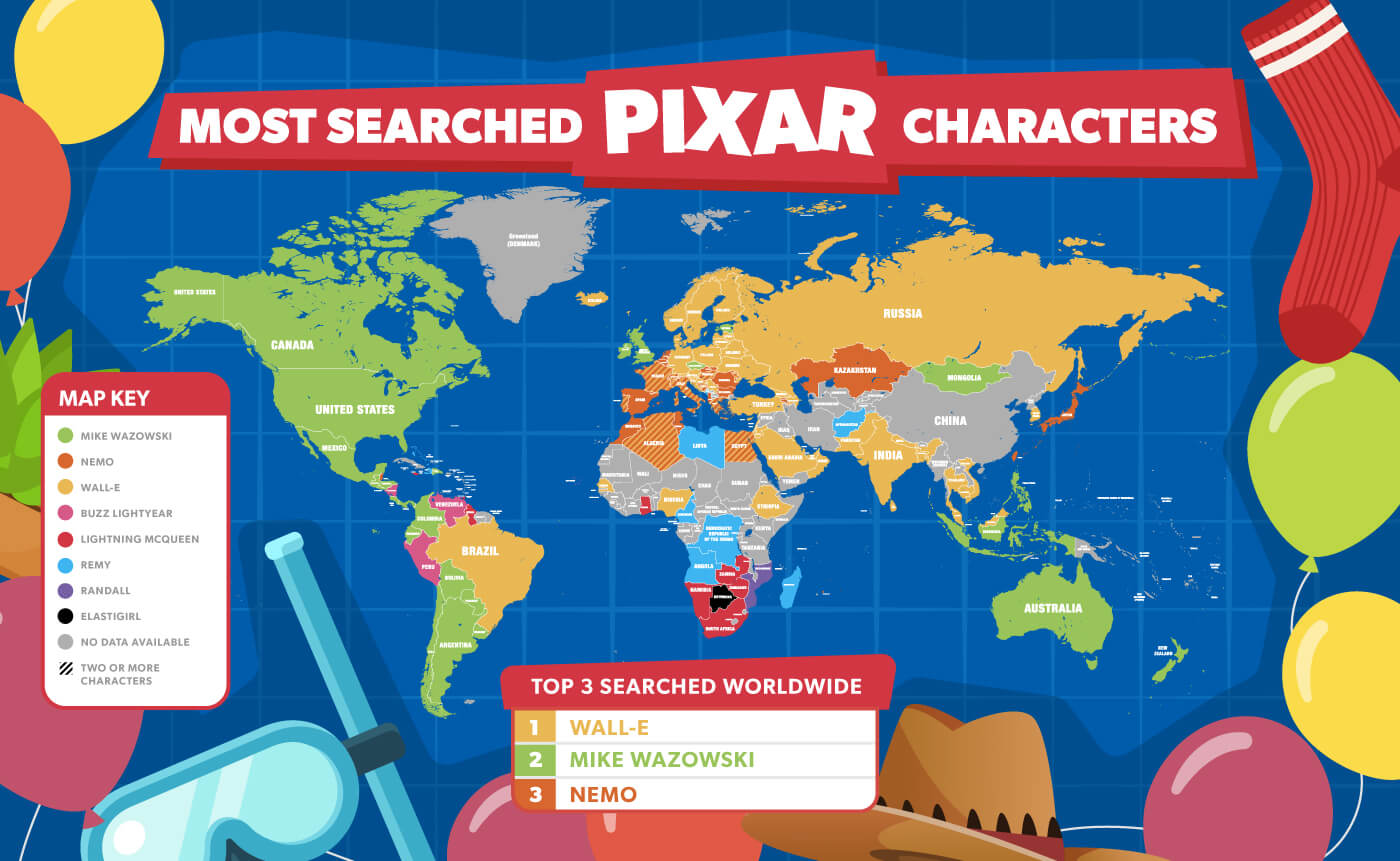 The most searched Pixar characters around the world

As Disney’s then-competitor and now-subsidiary, Pixar has also produced its fair share of memorable films and beloved characters. The search term ‘WALL-E’ had the highest volume in 55 countries, making the rusty, romantic robot the most searched Pixar character.

It was very close between the second and third most searched Pixar characters; it came down to just one country between the search terms ‘Mike Wazowski’ and ‘Nemo’, with 27 and 26 countries respectively. 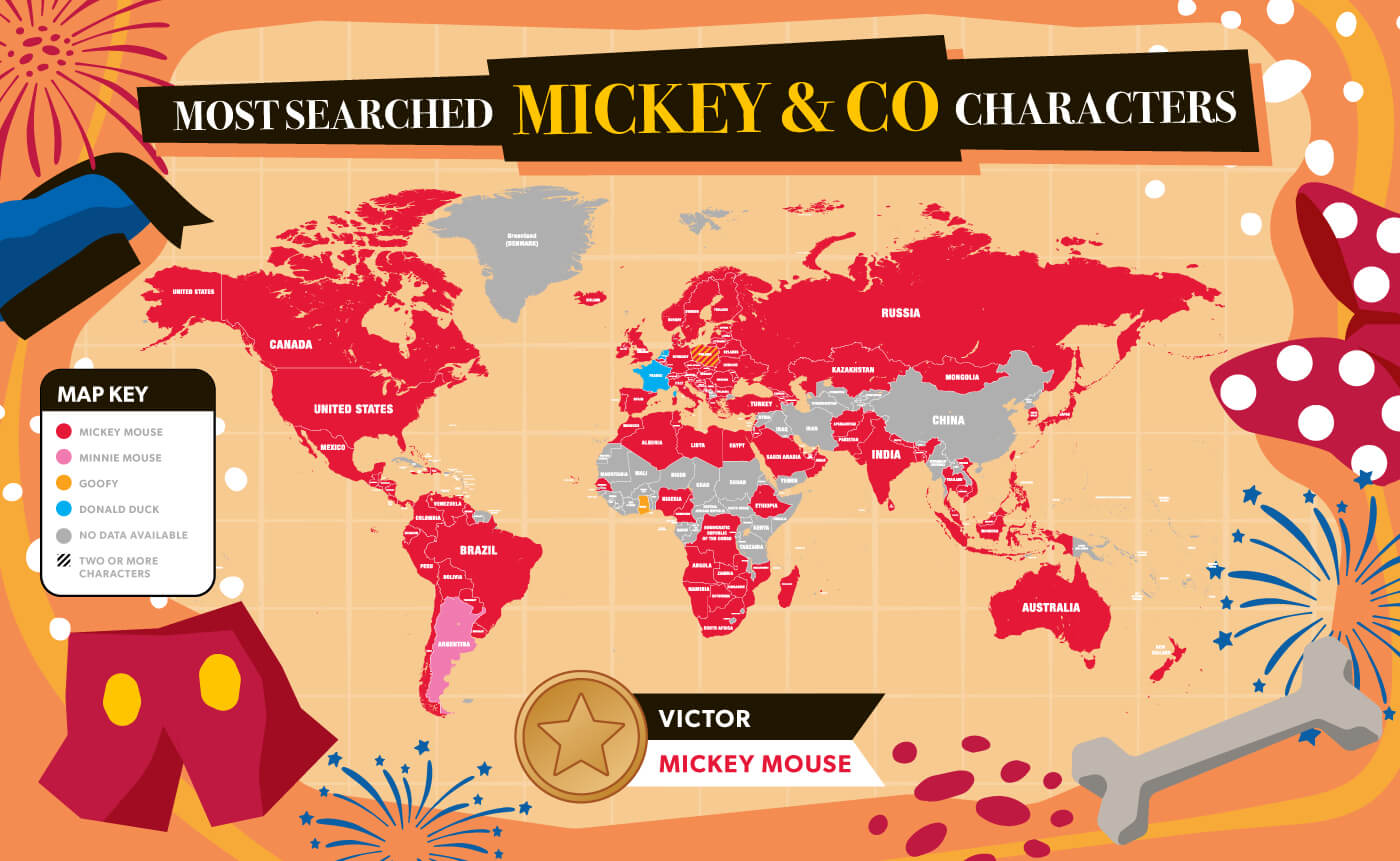 The most searched Mickey Mouse characters around the world